For an introduction to inflight refueling, see http://thanlont.blogspot.com/2013/10/texaco.html and https://tailspintopics.blogspot.com/2015/06/things-under-wings-inflight-refueling.html

For tactical delivery of a nuclear bomb, jets were superior to the AD Skyraider in terms of survivability during both ingress and egress, as well as cruise speed but were notably inferior in range.  Inflight refueling was adopted by the Navy to increase the mission radius of its carrier-based jets, first with big AJ Savages providing en route fuel to F2H-2 Banshees and then with the "buddy" concept, in which the jet carrying the bomb was refueled by one carrying a store equipped with the hose and drogue system. The "tanker" would top up the "bomber" and then turn back with enough fuel to return to the carrier while the bomber pressed on to the target. This is an example of the increase in range provided (the A2U was an attack variant of the Vought F7U-3 Cutlass). 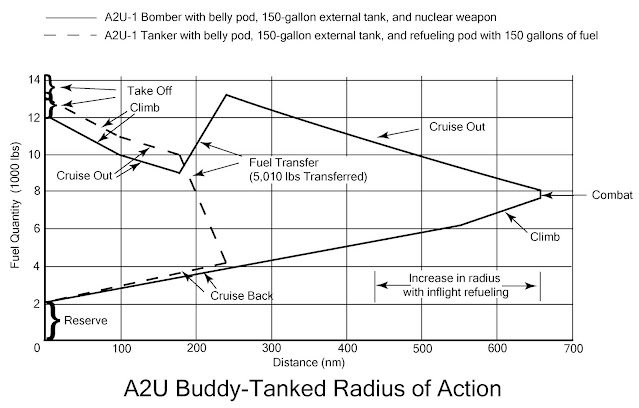 During the Malvina/Falkland Islands war in 1982, the British used an extreme example of this concept to deny the use of the runway in the Falkland Islands to Argentine fighters and take out air defense radars there with a Vulcan bomber taking off from and returning to a base on Ascension Island, 3,400 nautical miles away. See https://vulcantothesky.org/articles/falklands-war-1982-operation-black-buck/

Douglas developed the D-704 refueling tank for this purpose for its A4D Skyhawk. This is a illustration of the very similar store that the Navy subsequently bought from Sargeant-Fletcher:

The Navy, as was its practice at the time, contracted with North American for a modification of its FJ-4 Fury as a backup to the Douglas Skyhawk program. However, since it did not have the ground clearance necessary to carry the Douglas store, North American designed a "symmetrical" two-tank configuration that did, one tank containing the reel, hose, and drogue along with fuel and the other full of fuel. The hose reel was relocated to the midsection of the tank and the drogue streamed out of the bottom of its aft end. 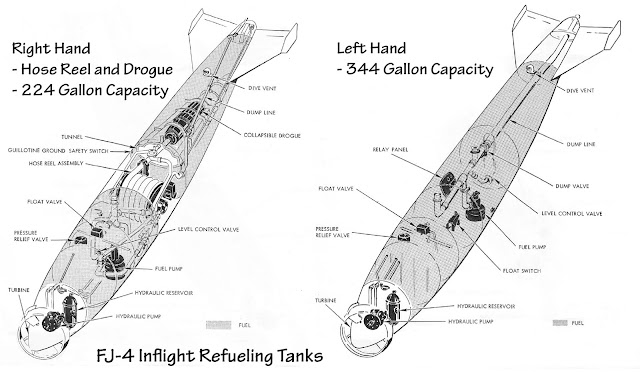 The bespoke FJ-4 tank didn't have much ground clearance either. 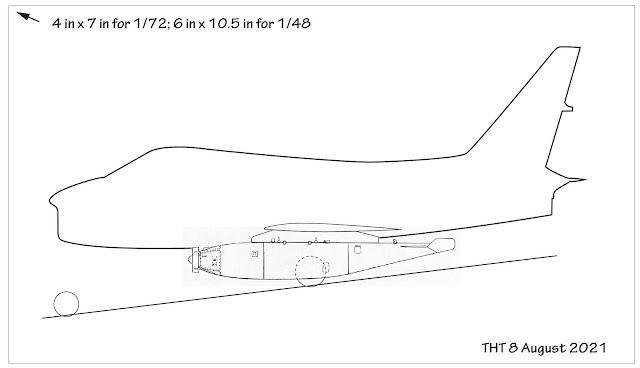 Sam Morgan provided a valuable insight into the configuration of the tanks when he noted that the black stripes used to position the handling cradle were in different locations:

Another view of the tanks: 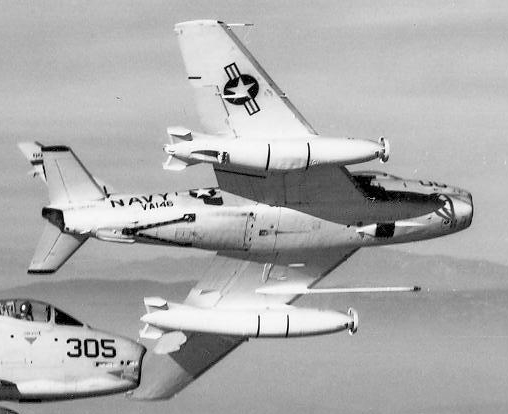 I created this drawing of the reel tank from illustrations in the maintenance manual for the system provided by Jerry Wells and photos provided by Angelo Romano. The side-view outline is based on a partially dimensioned manual drawing that was clearly approximate in detail; for the rest I relied on photo interpretation. The status light configuration is notional since I don't have a high resolution image of the aft end of the tank; there were three lights, yellow/amber, green, and red. A hose "floodlight" for night refueling is also mentioned in the manual but I have no other information as to its location or configuration. 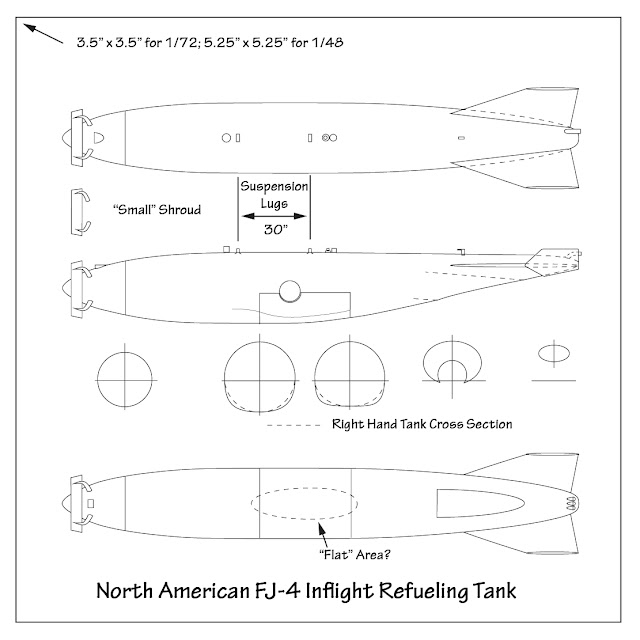 Note the side-ward bulge in the midsection where the hose reel was located to provide clearance with the bottom of it. There also appear to be two different diameter propeller shrouds: the larger one accommodates the blades of the D-704 pod; my guess is that the smaller propeller proved inadequate for the power required. Or it may have been a desire to standardize the pump.

The left-hand tank was identical in size and also in shape with the exception of the midsection. 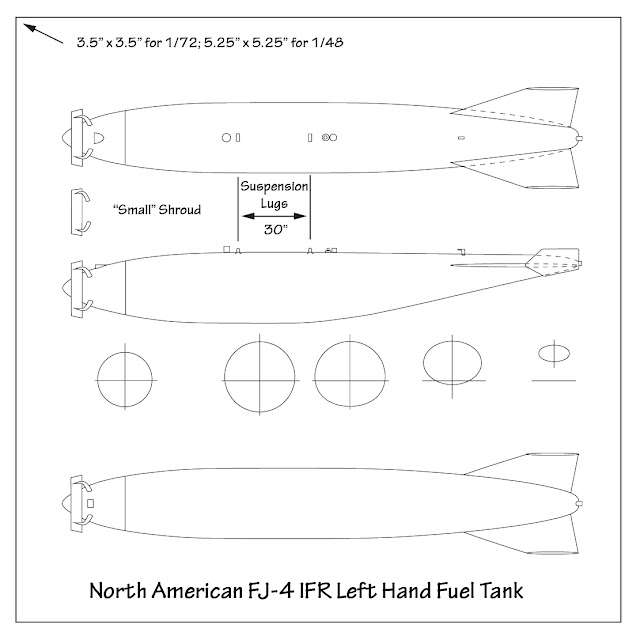 The FJ-4B had an unusually large number of different stores pylons (as well as external fuel tanks). The one used for the IFR tanks: 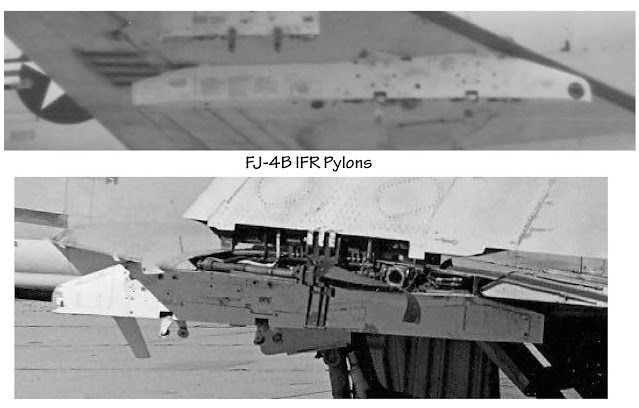 Two triangular flat plates provided lateral stiffness to the pylon (the picture was taken of two pylons upside down on the ground; the small pylon is marked with Xs and the picture has been inverted).