In the typical picture of an Air Force pilot on the ramp going to and from his airplane, he is wearing a parachute. Navy pilots, rarely after flight school.  At some point before mid-July 1944, probably much earlier, parachutes were left in the cockpits of carrier-based airplanes, doubtless to avoid any possibility of a parachute opening accidentally on the flight deck. From the 1 July 1944 issue of Naval Aviation News, page 33: 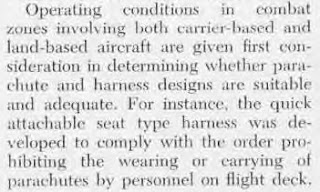 In order to make strapping in less of a hassle, the pilot was provided with a parachute harness to wear to and from the airplane. It had two straps hanging down from the shoulders with clips at the bottom to attach to the parachute pack in the seat pan. 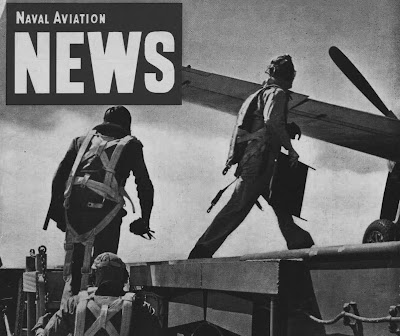 The crotch straps dangling down from the bottom of the harness were often left unattached for comfort while walking to and from the airplane.

This separate harness seems to have disappeared after the war but the parachutes (usually back packs) still remained in the cockpit as evidenced by this Marine FJ-2 pilot saddling up. 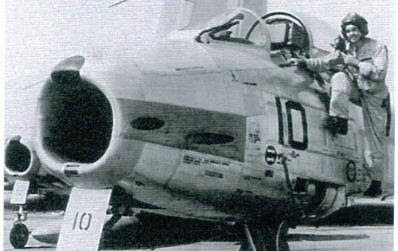 The torso harness was reinvented by Douglas for use with the A4D ejection seats. Astronaut Alan Bean has a picture of him in one on his website,  http://www.alanbean.com/naval_aviator.cfm
(He's also wearing an anti-blackout or g-suit.)

The torso harness became standard at some point with the Martin-Baker ejection seats. 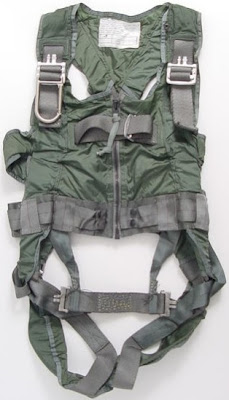 For much, much more on flight suit gear, see: http://heritageflightgeardisplays.wordpress.com/
Posted by Tailspin at 5:56 PM No comments: