Note that the side of the pylon scales to 8 inches in height.

This is a picture of a pylon in Larry's collection that was removed from a P2V.

While working on another F2H project (click HERE for a work in progress), I finally realized that I had never seen a McDonnell document that identified the location of the F2H Banshee stores pylons by fuselage station (fore/aft location) or butt line (distance outboard from fuselage center line). A quick check also revealed that McDonnell F2H front and top view documents that show the pylons are inconsistent with respect to their location (in fairness, exactness in those particular drawings was not a requirement).

Fortunately Larry Webster lives nearby and has a disassembled F2H-3 in his backyard. He and I were able to get good-enough data using a tape measure to locate them within an inch or less. This is the result: 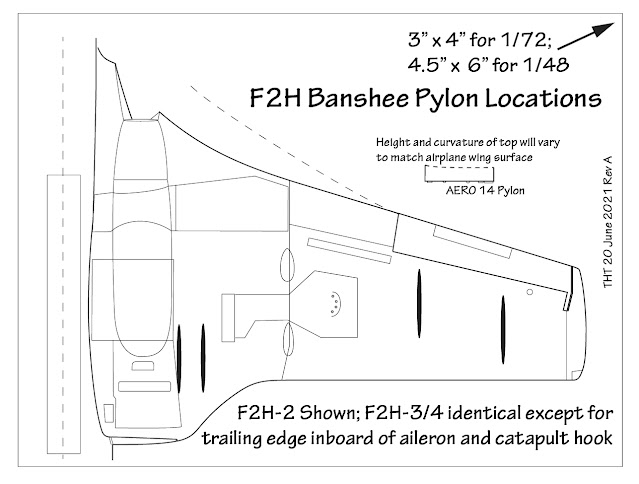 Note that with the exception of the pylons and the outline of the wing (which was taken from pretty good McDonnell lines and station drawings), the location of the rest of the detail is not quite as accurate and I may have included more F2H-3/4 features than just the fairings over the wing-fold hinges.

The odd placement of the stores pylons is the result of the F2H-1 not being required to have them (neither was the F9F-2 Panther). They first appeared on the F2H-2 and the goal was almost certainly to add them with minimal changes to the structure. There are eight, numbered from left to right.

They are all AERO 14As, which were capable of carrying either rockets or 500-lb bombs. However, actual loads varied with the size of the bombs. For example, eight five-inch rockets or eight 100-lb bombs were two options but a total of only two 500-lb bombs could be loaded and only on the two most inboard stations, 4 and 5.

The upper side of the two-inch wide pylons differed slightly in shape to conform to the lower wing surface and were numbered by station as a result.

Note that the two inboard stations, 4/5 and 3/6, are less that 12 inches apart, being squeezed between a large removable panel and the main landing gear. The stations on the outer wing panel, 1/8 and 2/7 are not only well outboard but staggered. Placing them outboard reduced the impact of the added weight on the wing structure. They may have been staggered because of either center of gravity or structural (including aeroelastic) considerations or both.

Another Banshee stores oddity is that the F2H-2B carried a nuke on number 4 station while the F2H-3/4 carried one on the number 3 station.