As a result of a Jared Zichek Navy P-80A post in Retro Mechanix (see http://retromechanix.com/ for his web site), I took a trip in the way-back machine to a Tailhook Topics column in an IPMS Update:

Jared posted some terrific pictures that he found at the National Archives providing details of the modifications involved. See http://retromechanix.com/lockheed-p-80a-for-the-u-s-navy-1945/ (I don't know how he keeps coming up with some of this stuff; I've been there many times and never seen this particular report.)

The pictures solve a mystery for me. It turns out that the tailhook was installed in a recess on the bottom of the fuselage. One unusual aspect of the installation is that the pivot point for the tailhook was on the aft end of a bell crank that tilted down when the tailhook was lowered. As a result, when the hook is down, it appears to be externally mounted. The arrangement kept the hook from damaging the fuselage, since the bell crank lowered the front end of the hook so the aft end hit a transverse bumper on the bottom of the fuselage if it happened to bounce or be pulled that high. All that will make more sense when you look at the pictures that Jared has posted.

Another unusual aspect of the modification was that the airplane could be attached to the catapult shuttle with either a pendant, which attaches to only one point on the aircraft, or a bridle, which attaches to two points. The bridle arrangement was the most common up until then, mainly because the landing gear represented two strong points to attach a bridle to and stores on the centerline made it difficult to find a place to locate a pendant.

Both bridle and pendant configurations were evaluated for catapult launch of the Navy's P-80A. The bridle cable was attached to a hook on each wing and passed in front of the catapult shuttle. 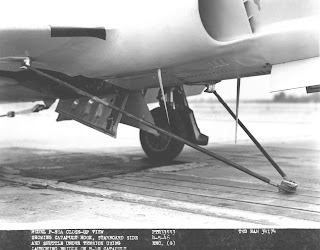 The pendant was shorter and therefore lighter as well as easier for the deck crew to attach: one end was looped around the catapult shuttle and the other to an attach point on the bottom of the forward fuselage. However, there was some concern that the launch would be more exciting with the pendant if the airplane was lined up a bit crooked or offset relative to the catapult track. 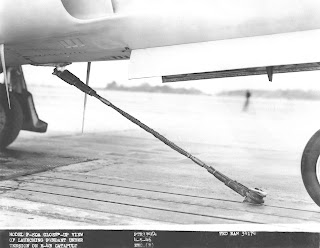 In shore-based testing, the bridle was found to cause too much nose-up pitch at nominal accelerations and end speeds. At 2.6 g and 75 mph end speed, the tail pipe came within four inches of the deck.

The pendant did not cause a pitch up but was found to ding the aircraft on release; however, this was attributed to the shore-based catapult installation that had a track sunk below ground level. No problem was encountered with a non-perfect lineup.

In the shipboard trials aboard FDR on 1 November 1946, Marion Carl made four deck runs (starting from virtually the fantail) and two catapult launches at fairly light gross weights and about 35 knots wind over deck. All were satisfactory. 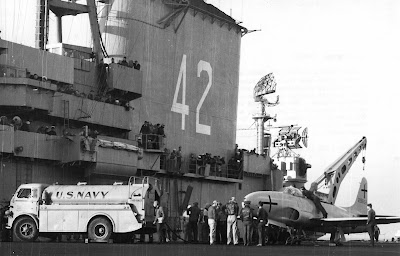 The drawing incorrectly depicts a tall thin mast in front of the windscreen (see http://tailspintopics.blogspot.com/2016/02/lockheed-p-80a-carrier-trials-mea-culpa.html). The side view drawing above is also incorrect with respect to the location of the forward end of the tailhook and its overall length. I had assumed that the tailhook would be attached forward of the fuselage break from a structural standpoint. The pictures on Jared's website referenced above provide a much better idea of the installation and show it to be attached aft of the fuselage break.

Rumor has it that the P-80 was ready for carrier trials before the McDonnell FH-1 Phantom was. According to one account, the P-80 team had to wait for the Navy's jet fighter to be first to operate from a U.S. carrier at sea. (As in many other things associated with aircraft carriers in those days, however, the Brits were the first to fly a jet to and from one.)

You'll note that the airplane does not have tip tanks. The Navy determined that the P-80's carrier suitability was marginal without them and unacceptable with them. See http://retromechanix.com/lockheed-p-80a-for-the-u-s-navy-1947/

Several minor modifications are required to accurately represent the P-80A. For one thing, it did not have an ejection seat. The windscreen was about nine inches farther aft than later P-80s and aft end of the canopy ended in a point, not a half-round "tail." The landing light was located in the tip of the nose rather than on the nose landing gear and the pitot, on the upper leading edge of the tail fin, not under the forward fuselage. A wire radio antenna ran from the canopy to the leading edge of the vertical fin.The red turbine warning stripe was not yet used. However, my guess is that it did have red lines around the flaps on the upper wing surface. My notes say that the airplane was AN512 light gloss gray, something very close to FS 16492 according to Dana Bell. Based on fuselage station drawings provided by Gerry Asher, this is my best guess at the windscreen location of the A and the B/C airplanes: 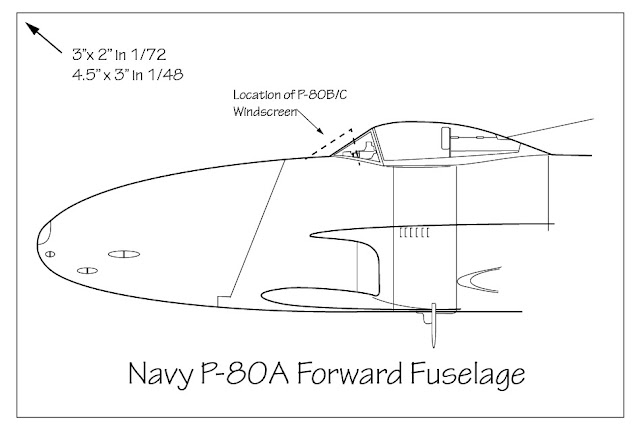 Also, when the windscreen was moved forward on the P-80B to provide clearance for an ejection, the sliding portion of the canopy was lengthened so that its aft end remained in the same place as on the A.  Cutting the "tail" off the end of the F-80C canopy and sanding it to a point will approximate the P-80A canopy. For the correct length, you'll have to shorten the sliding canopy by cutting about six-seven inches off the front of it.

Note that the P-80A canopy had structure spanning the side rails aft of the cockpit opening and fittings at the lower front corners that lifted the forward end up as it slid aft. (The gunsight is not shown.) 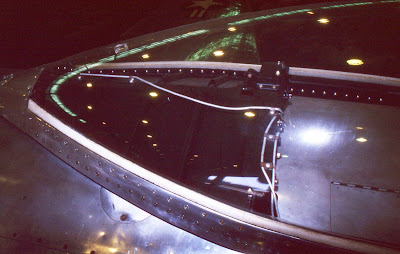 This inboard profile of the P-80A forward fuselage shows the instrument panel located at the base of the windscreen, the cantilevered gun sight, and the bucket seat: 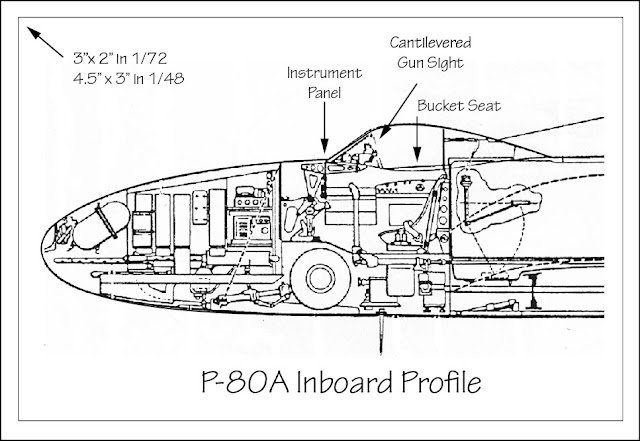 The location of the aft cockpit bulkhead, instrument panel, and flight controls were the same relative to the airframe as in the P-80B's and C's. The gun sight appears to have not been as cantilevered in the ejection-seat equipped P-80s, retaining the same relationship to the windscreen. 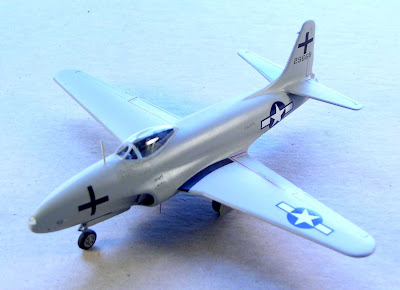 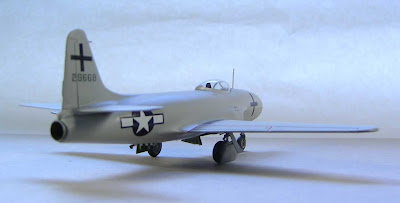 I vacuformed a new canopy using the Airfix canopy modified to be a master.

The 1/72 new Sword P-80A/B kit provides both the bucket seat for the A as well as the ejection seat for the B, but unfortunately the windscreen location and sliding canopy are only provided for the B. 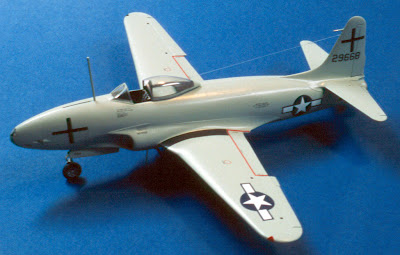 He also sells many other conversion kits and decals for the Lockheed P-80/T-33/F-94 series as well as other jets of that era. Contact him for a list of his kits at gmasher@netzero.net and also ask to be added to his email list.

Lockheed proposed production of a carrier-based P-80B but the Navy already had a plateful of jet fighters in work. In 1946 or 1947, the Navy obtained another P-80A and a P-80B from the Army for missile chase (and destroy, if necessary) at Point Mugu. See http://herschpahlbooks.com/dedications/cliff_weirick.htm.

In early 1948, the Navy realized that an expeditious transition to jet fighters required more airplanes sooner than Grumman and McDonnell could build them. The solution was to buy 50 P-80Cs from the Air Force to “train pilots and maintenance personnel in operation of jets.” These were stock 50 P-80s (49 P-80C-1-LO and 1 P-80C-5-LO), designated TO-1s since the Navy considered them to be trainers and they were not carrier capable. They were assigned BuNos 33821-33870. They were all originally based in the San Diego area, “to simplify problems of maintenance and logistic support”. VMF-311 received 12 and operated them from MCAS El Toro, California. VF-6A, to be redesignated VF-52, initially received 24. In effect, both squadrons functioned as the initial jet transition training units. The rest of the P-80Cs were held in reserve for attrition.

Note the pitot under the forward fuselage, dielectric panel on the nose, windscreen set farther forward on the fuselage, ejection seat, etc.
Posted by Tailspin at 4:52 PM No comments: