Modelers' Guide to the Sabre & Fury

Jay Sherlock has produced a companion volume to his AD Skyraider book published by Aero Research. 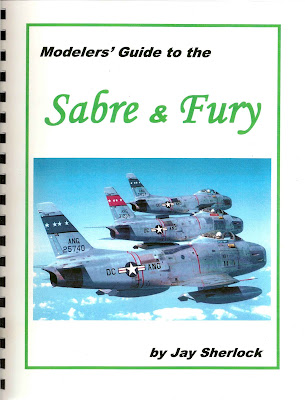 As you might expect, the bulk of the monograph is devoted to the various versions of the Sabre, including the Canadian and Australian-built ones. Reviews of many of the F-86 kits are provided along with a listing of decals and aftermarket parts. One very useful section is devoted to a primer on Sabre/Fury wings.

At least a couple of pages are devoted to each of the Fury types, listing both the recommended kit in each scale and the numerous changes required to create one from an F-86  kit. There are few illustrations, however, and an occasional error or omission. For example, the XFJ-2 windscreen was not the same as the F-86's. (I also think that the bulges under the wingtips of the XFJ-2 contained cameras to photograph the landing gear and tailhook, not flotation bags.) The FJ-2 inlet was slightly but notably different from the F-86's and the increase in depth of the FJ-3's inlet was in addition to the FJ-2 change. The FJ-3 was originally equipped with the barrier guard on the belly but it was subsequently deleted. The change to add external stiffening to the elevators isn't mentioned. The FJ-4 options list states that the vertical fin of the prototypes was 11 inches shorter than the prototypes (which I wasn't aware of) but not that 18 inches was clipped from each side of horizontal tail. As a result, the information and drawings provided here: http://tailspintopics.blogspot.com/2009/10/fj-fury.html and here:  http://tailspintopics.blogspot.com/2011/04/fj23-fury-redux.html  will still be of use to the modeler, as will the Ginter Naval Fighters monograph for the type being modeled.

I am pleased to report that were a few revelations. For example, I had noted that the guns were removed from some FJ-4Bs and vents added to the aft end of the panel covering the gun bay but didn't know why. 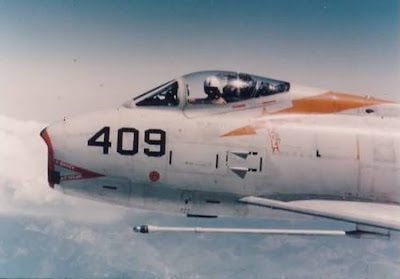 Jay states that the cannons on the left side were removed on some aircraft to allow installation of a back-up electrical generator. Joe Baugher provided details in his excellent series of posts on U.S. Navy airplanes: "During service, some FJ-4Bs had the port pair of 20-mm cannon removed so that a standby generator system could be installed. This standby generator provided power backup in case the main generator failed--without the backup it was nearly impossible to fly at night or under instrument conditions for more than a few minutes with only battery power. At the same time, the standard ejection seat was replaced by a Martin-Baker seat that provided the ability to eject safely at much lower altitudes"


With respect to the cannon deletion, Dave Collier noted in an email: "In the period that I worked on FJ-4Bs (1962-64) our squadron had several aircraft with only two cannon. We were told the mod was part of the Bullpup installation but the backup generator  installation seems to make more sense since you see lots of photos of A/C carrying Bullpups with the port guns installed."
Dave also provided the following observation: "In photos of FJ-4Bs late in their service life you will find aircraft with bare metal in the area of the cannon blast tube panel. Paint was removed from this area after panels came apart during firing runs. The bare metal was consider necessary to help detect small panel cracks before severe damage was done. While stripping the panels I found that most had at least five coats of paint."

Furball is about to release 1/48 decals for several different F4D aircraft. See my updated blog on the F4D for details: http://tailspintopics.blogspot.com/2010/10/bat-out-of-hell.html
Posted by Tailspin at 10:53 AM No comments: