Rick Morgan (http://rickmorganbooks.com/index.html) and I have been researching the modification of the TBM-3 and -3E for other missions. We've found some errors in the descriptions on the interweb of the various TBM-3 variants. (We're shocked, shocked...)

For a summary and some links, see http://thanlont.blogspot.com/2015/07/post-war-eastern-tbm-variants.html
Posted by Tailspin at 9:05 AM No comments:

To minimize weight, the Douglas A4D Skyhawk did not have nose gear steering among many other things. Turns on the ground were accomplished by differential braking. It was guided in close quarters and where accuracy was desired, e.g. lining up on the catapult, with a steering bar or "tiller" inserted in the nose wheel hub. 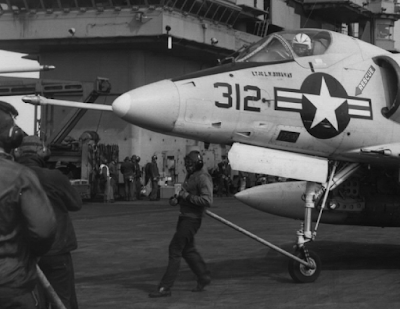 This practice was common for the first Navy carrier-based jets. Nose-gear steering was introduced with the F7U-3 Cutlass because of its size and weight.

When the A-4 was being modified to be a two-seat trainer, one of the features added to improve its marginal crosswind landing capability was a steerable nose gear. This was subsequently adopted on later versions of the single-seat Skyhawk. The changes consisted of a hydraulic actuator mounted in place of the shimmy damper on the right side of the strut just above the fork holding the wheel, hydraulic lines from the nose wheel well to the actuator, and a vertical sleeve to enclose the hydraulic lines. The sleeve was mounted to the bottom of the strut and guided up and down by a collar mounted on the upper back side of the nose landing gear as the shock strut moved in and out. (The slender rod, aka shrink strut, on the left side of the nose landing gear pulled the shock strut into the strut body as the gear retracted. This minimized the volume required for the retracted nose landing gear.) 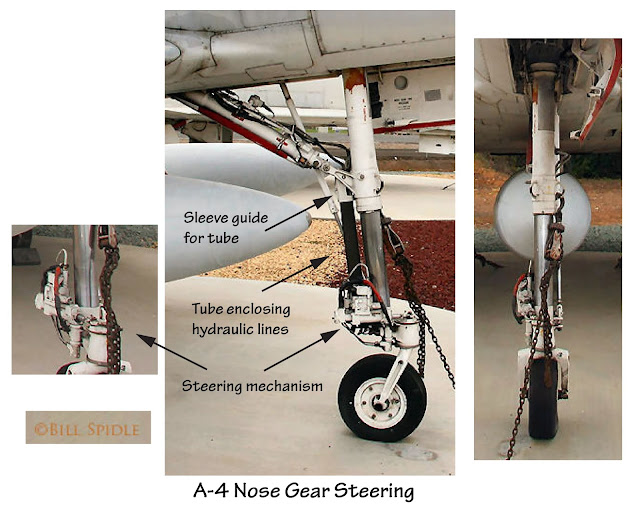 The illustrations use crops from a set of A-4M walkaround photos by Bill Spidle.
Posted by Tailspin at 2:26 PM 2 comments:

It's Not That Easy to Avoid Error

I did a pretty good post on the Douglas F4D early on that was based on an article I did for the IPMS update: http://tailspintopics.blogspot.com/2010/10/bat-out-of-hell.html

One of the detail configuration issues that I didn't mention was the main landing gear wheel hubs, mostly because I wasn't paying close attention to them.

I was recently asked which of three different wheel hubs installed on F4Ds now on display was the one to use on a fleet airplane. The answer was: 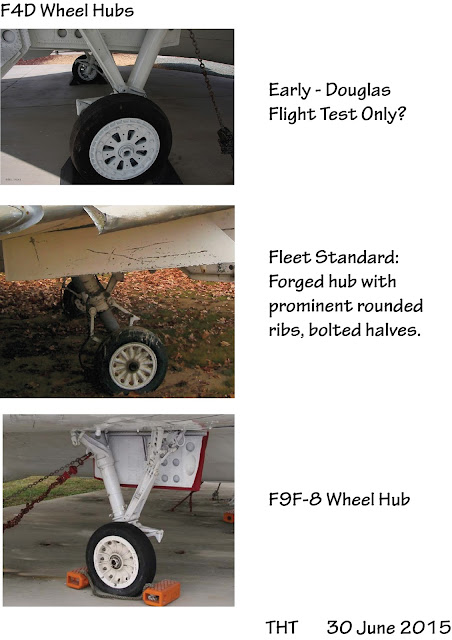 Note that the F9F-8 wheel hub was not used on fleet F4Ds as far as I know. If a model kit manufacturer faithfully copied this particular museum's F4D, it would be incorrect in this regard.

Another detail is the "spat" that was on the earliest F4Ds. This was to accommodate the Davis barrier used on axial-deck carriers (see http://thanlont.blogspot.com/2008/10/davis-barrier-redux.html) 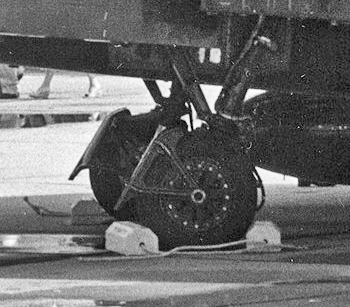 As far as I know, the spats weren't present on any fleet Fords, because they only operated from angle-deck carriers.

Finally, as I was hanging out with some radio-control enthusiasts at the New England Air Museum as they were measuring its F4D for a large-scale flying model, I happened to notice that the wing-tip airfoil had a negative camber. This is one way to provide stability and control to a "tail-less" design. It seems counter-intuitive from an overall lift standpoint but something of the sort is necessary when there is no horizontal tail.