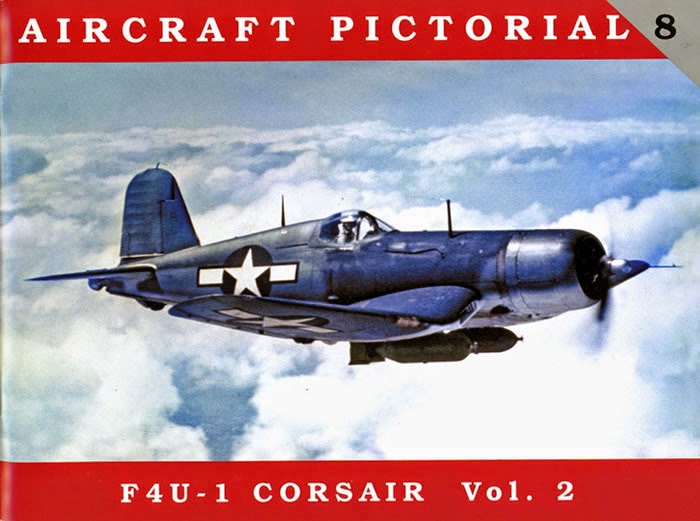 You may have a dozen F4U Corsair books and monographs in your library, maybe even two dozen. It doesn't matter. If you have any interest in the F4U, you'll want to buy this book. I have lots of Corsair information: books, magazines, clippings, web articles, etc. I've read them all multiple times. I can assure you that a lot of configuration material in this monograph is in none of them.

The content is very similar to Volume 1 (see http://tailspintopics.blogspot.com/2014/12/aircraft-pictorial-7-f4u-1-corsair-vol-1.html). It covered the development history and configuration development of the "Birdcage" Corsairs in impressive detail with many previously unpublished photos and new information. This one does the same for the "Raised Canopy" F4U-1s that succeeded them in production.

Go here for a more detailed and illustrated review of this volume: http://www.hyperscale.com/2015/reviews/books/f4u1vol2bellbookreviewse_1.htm

You will not be disappointed.
Posted by Tailspin at 3:53 PM 1 comment:

The question of cockpit colors comes up fairly often on modeling web sites. I'm working on an overview of the changing requirements with some examples. See http://tailhooktopics.blogspot.com/2015/04/cockpits.html
Posted by Tailspin at 8:31 AM No comments:

The F3Ds of the Flying Nightmares in Korea

23 June 2017: I've just taken a closer look at the variations in the  F3D's overhead hatch. It was the normal entry and exit point, accessed by kick-in steps on the right side of the fuselage. 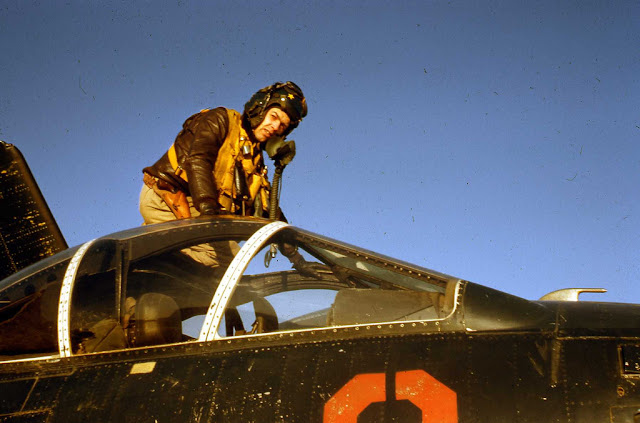 The hatch was originally solid on the prototypes:

Note that there were horizontal lines across the windscreen.

Two small side-by-side windows were subsequently added to the hatch.

There was a "disc" in the center of the hatch that contained the lever to open and close it.

Later, probably in the mid-1950s or later, a hatch with much more glass area was introduced.

This is almost certainly the hatch on the EF-10Bs but is not necessarily the one on all gray/white F3Ds:

Phil Juvet's walkaround site has gone to "404 not found" but here is the later hatch picture from it: 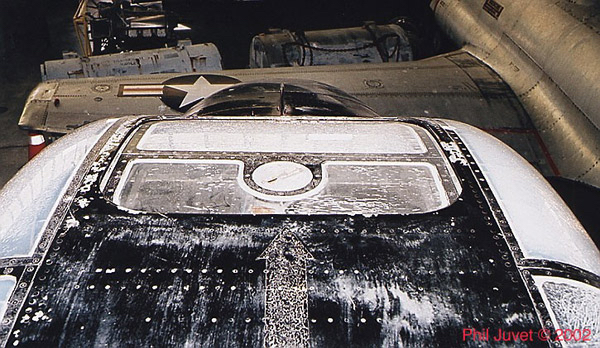 I suspect that this is an F3D painted black for display in a museum since it's likely that any operational blue or black Skyknights had the hatch with two small windows.

15 April 2015: I've made several updates in the last couple of days to this blog, most recently just now. The best single and best priced reference for the F3D is still Steve Ginter's monograph, Naval Fighters number Four. 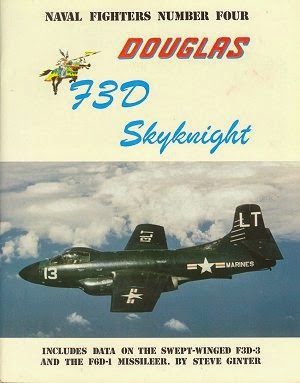 I suggest that you buy it directly from Steve: http://www.ginterbooks.com/NAVAL/NF4.htm
Otherwise, you risk getting a lower quality, print-on-demand version. 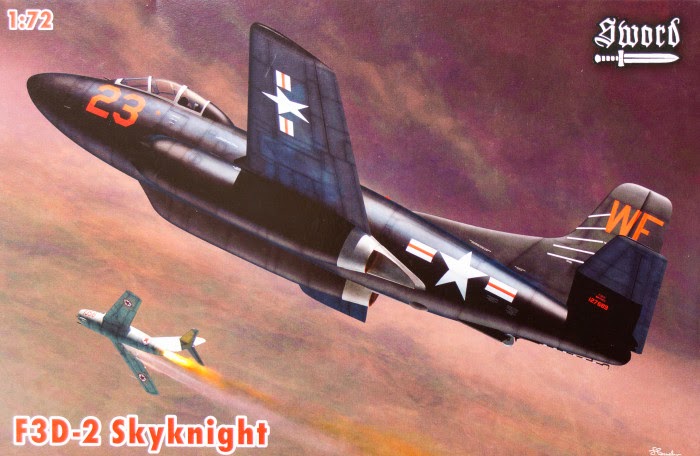 Markings for five different airplanes are provided in this kit, three of them for VMF(N)-513 F3Ds based in Korea during the Korean War.

Unfortunately, Sword relied in part on pictures of former Raytheon test beds, so there is a prominent external conduit on the upper left side of the fuselage and one on the right side of the fuselage forward of the wing that are on no operational Skyknight. Otherwise, it looks great in the box. 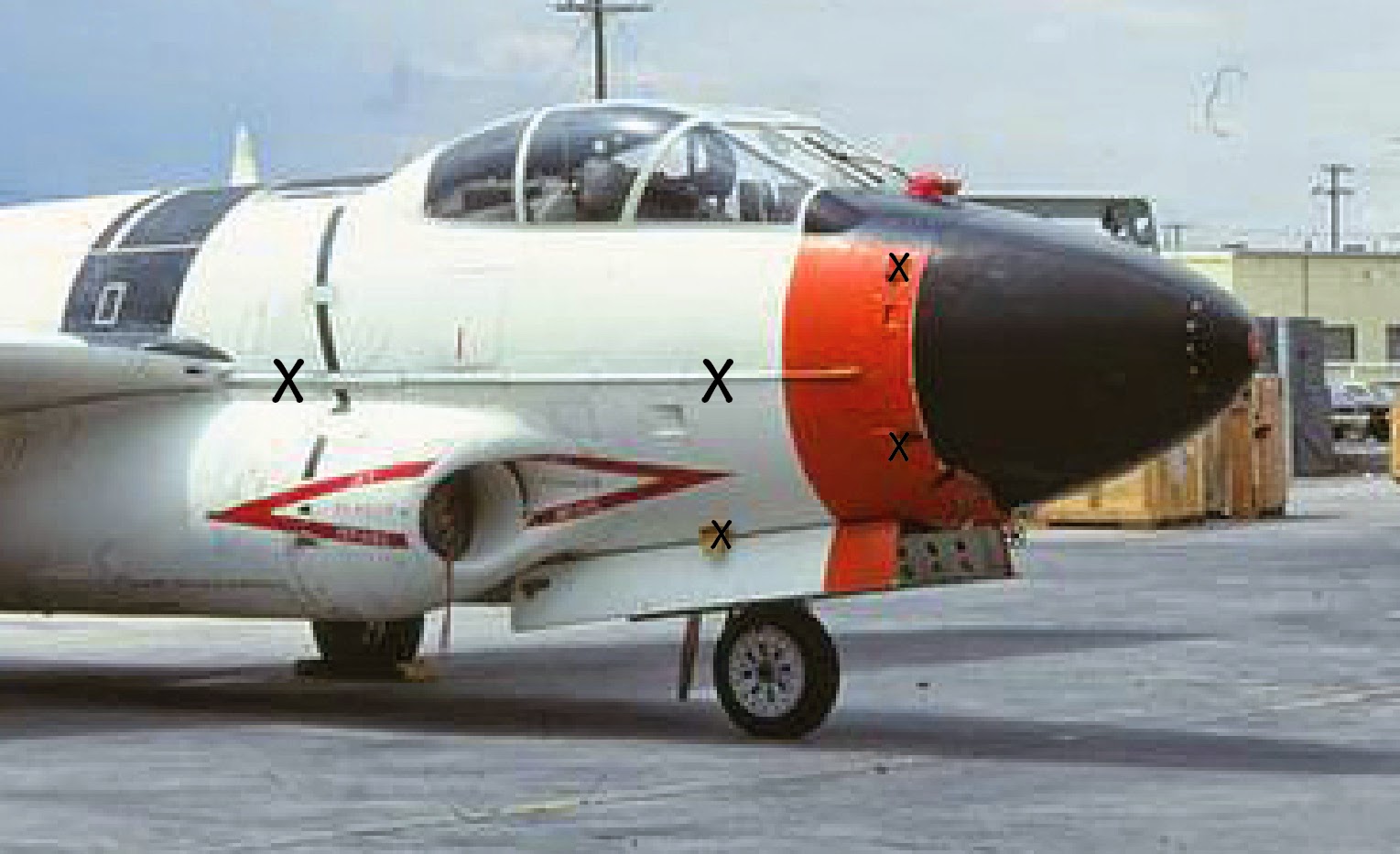 VMF(N)-513 is best known for escorting U.S. Air Force B-29s at night during the Korean War and shooting down the defending MiGs.* Their first airplanes in Korea were initially painted in a low-visibility night fighter scheme of black with red side numbers and tail codes. Surprisingly, the national insignia was not subdued although this is an example (one of two I've seen) of it being significantly reduced in size. (It may be that the Marines believed that the national insignia was not to be obscured and that this airplane is a former VC-4 F3D that had its national insignia subdued: see below.)

Jerry O'Rourke wrote an excellent book (with Capt. E.T. Wooldridge, USN Ret.) about their exploits. He was the officer-in-charge of the VC-4 detachment of F3Ds from Lake Champlain that was seconded to the Flying Nightmares when the Champ arrived off Korea in June 1953. 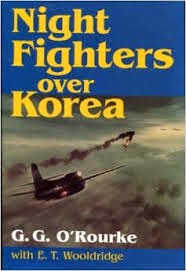 To reduce weight and improve performance, the inlet blanking plates (down inside the inlet ducts), tail bumper, and tail hook were removed from some F3Ds.

It would appear that most, if not all, of the VMF(N) F3Ds also had the Davis barrier cable pickup removed from the main landing gear since it was only required for carrier operations. (The spur is not provided in the Sword kit.) 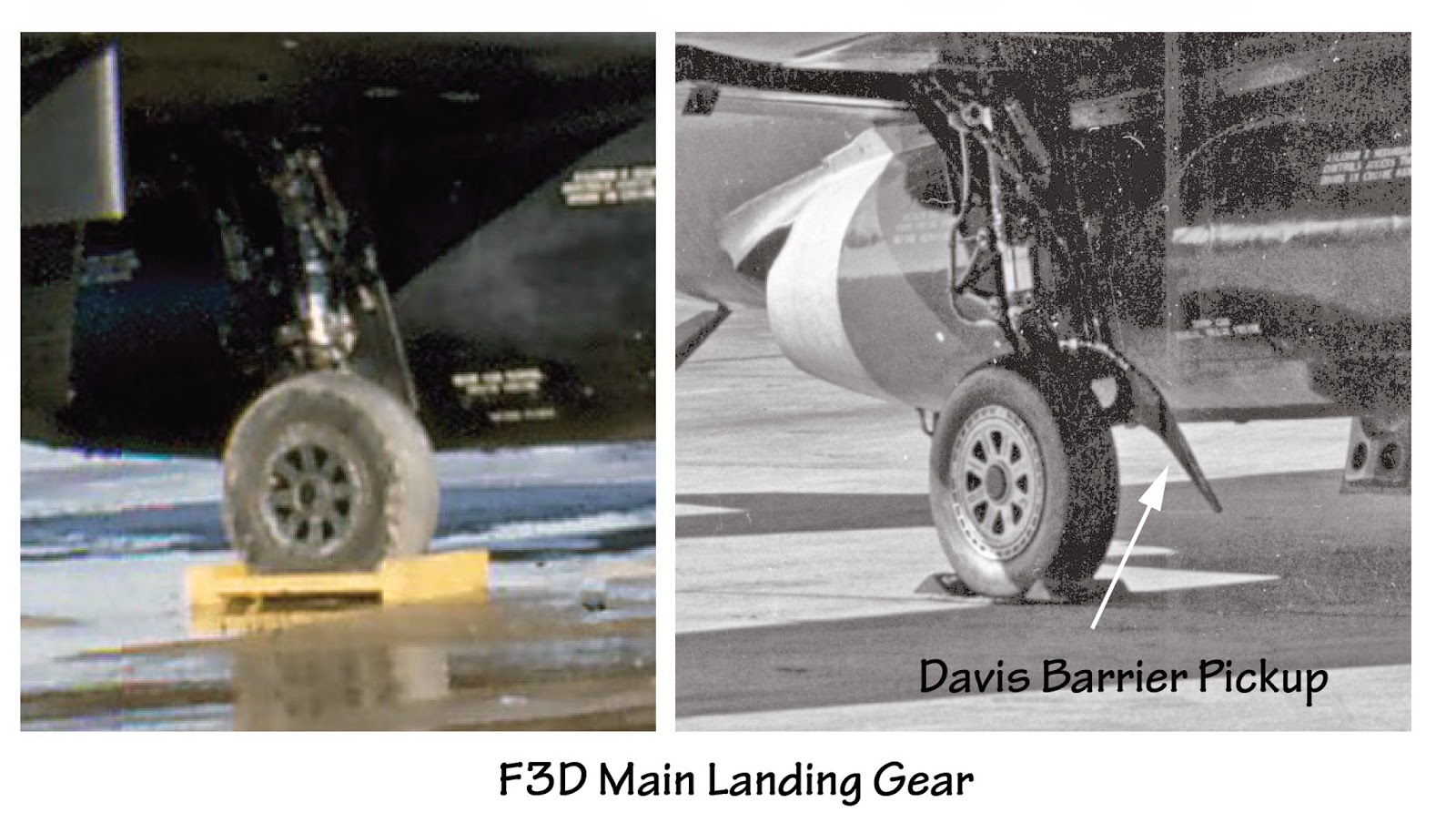 Because of the harsh operating conditions, including frequent flights in heavy rain, and/or substandard repaint, some of the black airplanes eventually exhibited significant wear and tear.

VMF(N)-513 reportedly began operations in Korea with 15 F3Ds, at least 14 painted black, in mid 1952. Over the next 12 months or so, they lost seven to accidents and in combat against MiGs. The replacements (and there may have also been some additions) were from the aircraft pool located in Japan; I had thought that all of these were blue but O'Rourke wrote that he flew a new "coal-black" F3D in combat on 24 July 1953.

It's not easy to tell in some photographs whether the airplane is overall black or blue. There doesn't seem to be any consistency with respect to the color of the type designation and Bureau Number on the fin under the horizontal stabilizer on blue F3Ds or their presence on black ones. It is clear that this one is a blue replacement airplane, though, with the angle-of-attack stripes over painted by the WF tail code. Note the spur on the main landing gear. 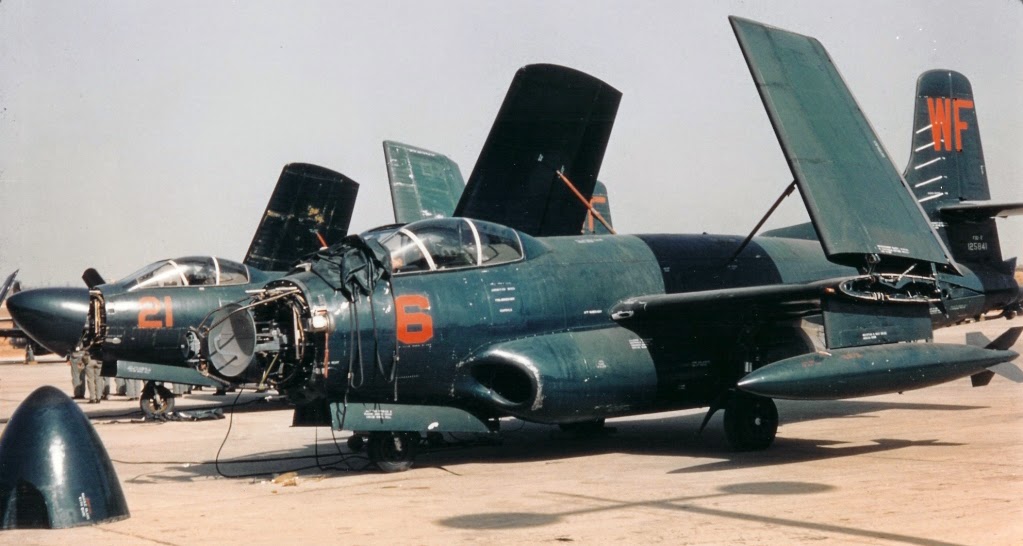 I'm pretty sure that the three marking options in the Sword kit are correctly shown on the back of the box as blue versus black although the box art of 23WF (see lead picture) incorrectly depicts it with the angle-of-attack stripes.

I had thought that the four VC-4 F3Ds that joined VMF(N)-513 would have been repainted with a red side number and WF tail code but according to O'Rourke, they were not remarked until they were formally transferred to the Marines in late August or early September 1953 when Lake Champlain left to return to the U.S. This is an example of one of them when it was flying from Champ in April 1953.

Doug Siegfried provided another of this F3D from the Lake Champlain cruise book:

Paul Bless, my go-to guy for the F3D, sent me this picture from the Navy Times that indicates the VC-4 markings were over sprayed like those of other carrier-based "all-weather" airplanes. 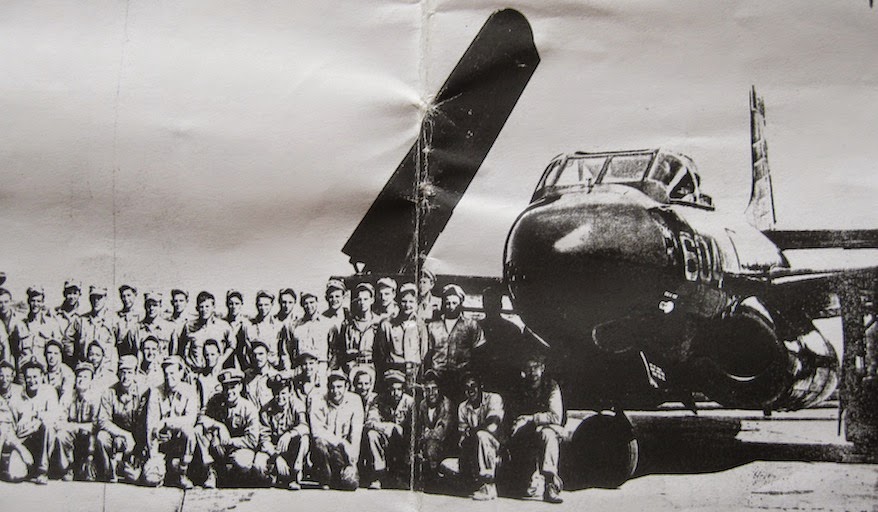 The following is probably a photo of a former VC-4 airplane since it was taken in September 1953, after their airplanes were transferred to VMF(N)-513. Note that the side number appears to have been painted over a VC-4 badge and the white stripes that denoted the access step locations have been partially obscured. (For the full picture, see http://www.millionmonkeytheater.com/f3dpics/127030.jpg)

Paul Bless also came up with this picture from Mike Allen that shows his father, Bobbie Allen, posed in front of a VC-4 airplane with obscured markings. 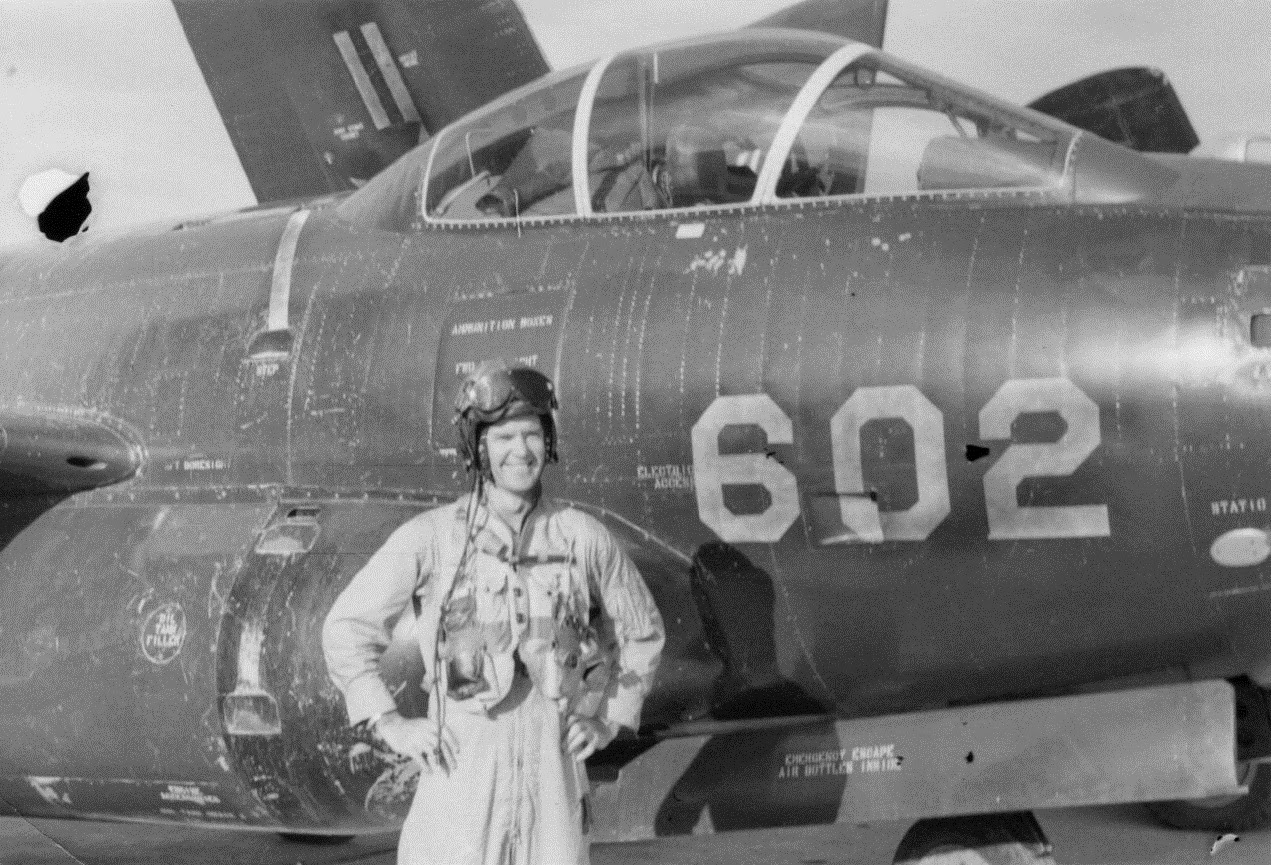 And this is another of cruise book photo of 604 on the ramp in Korea provided by Doug Siegfried. 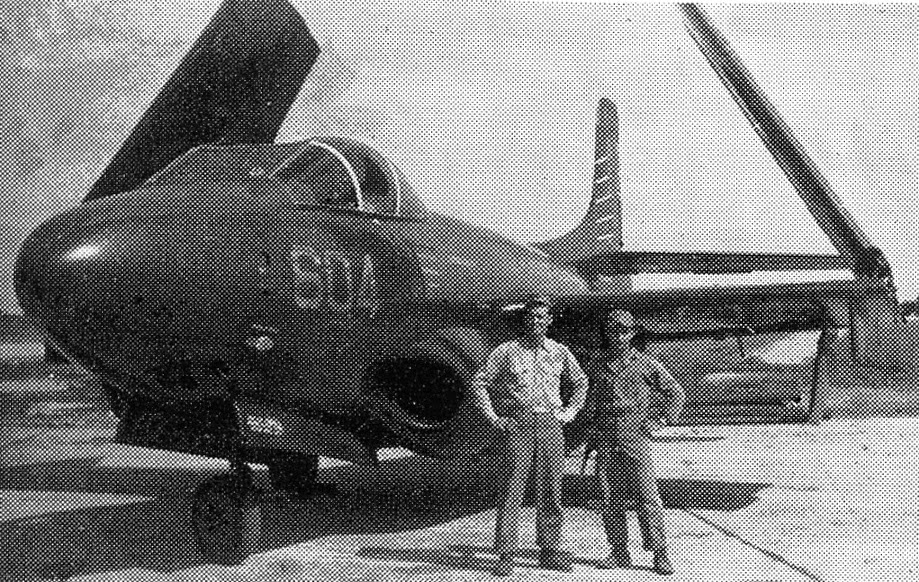 This crude obscuration of white markings on carrier-based night-attack airplanes was frequently accomplished during the Korean War as seen on this VC-33 AD-4N:

More care appears to have been taken with subduing the markings on the famous Korean War F4U-5N, Annie Mo.

*For a downloadable article about B-29 operations in Korea during the war, see http://www.afhso.af.mil/shared/media/document/AFD-090814-035.pdf

In case you wanted a picture of the interior of the speed brake: 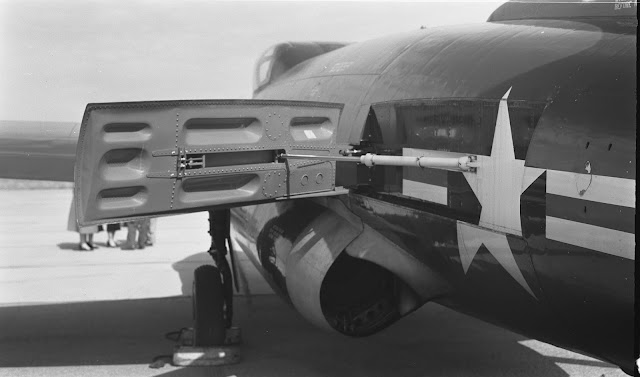 Trumpeter's 1/48 KA-3B kit includes a bomb-bay mounted crew compartment, apparently to be used for a forthcoming EKA-3B kit along with external antennas. They probably relied on the following drawing in an aviation enthusiast's publication because there is no cabin in the fuselage of the EKA-3B. 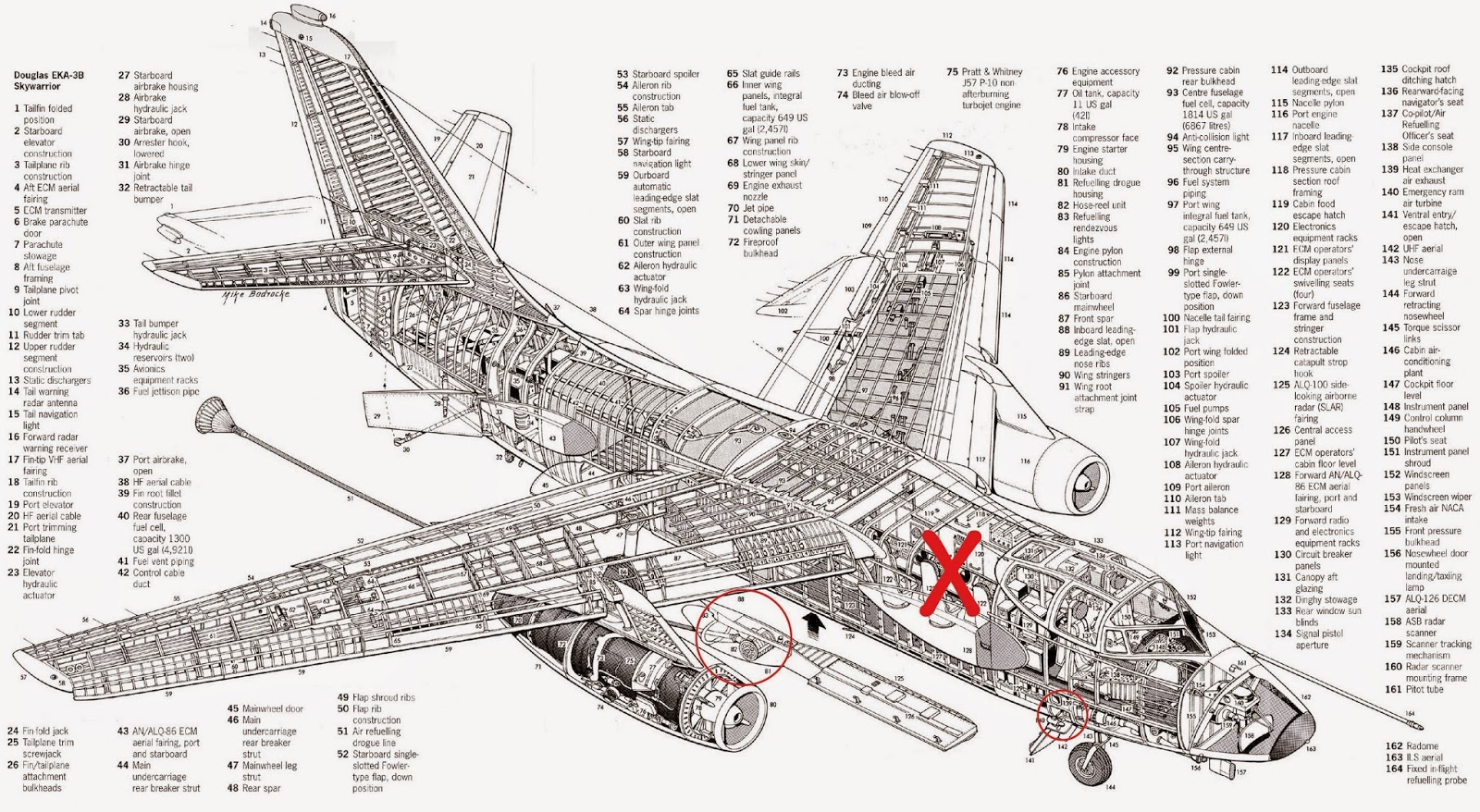 Unfortunately, the artist conflated the internal details of an EA-3B (electronic reconnaissance), which did have a cabin in the fuselage, with the external details of an EKA-3B (jammer/tanker). The inflight refueling hose reel is also way undersized and the EKA-3B, unlike the EA-3B, did not have a deployable ram-air turbine for emergency power.

The EKA-3B was a modified KA-3B (tanker), which was a bomber; the EA-3B was one of the so-called versions, A3Ds with the fuselage aft of the cockpit rearranged to provide a cabin. 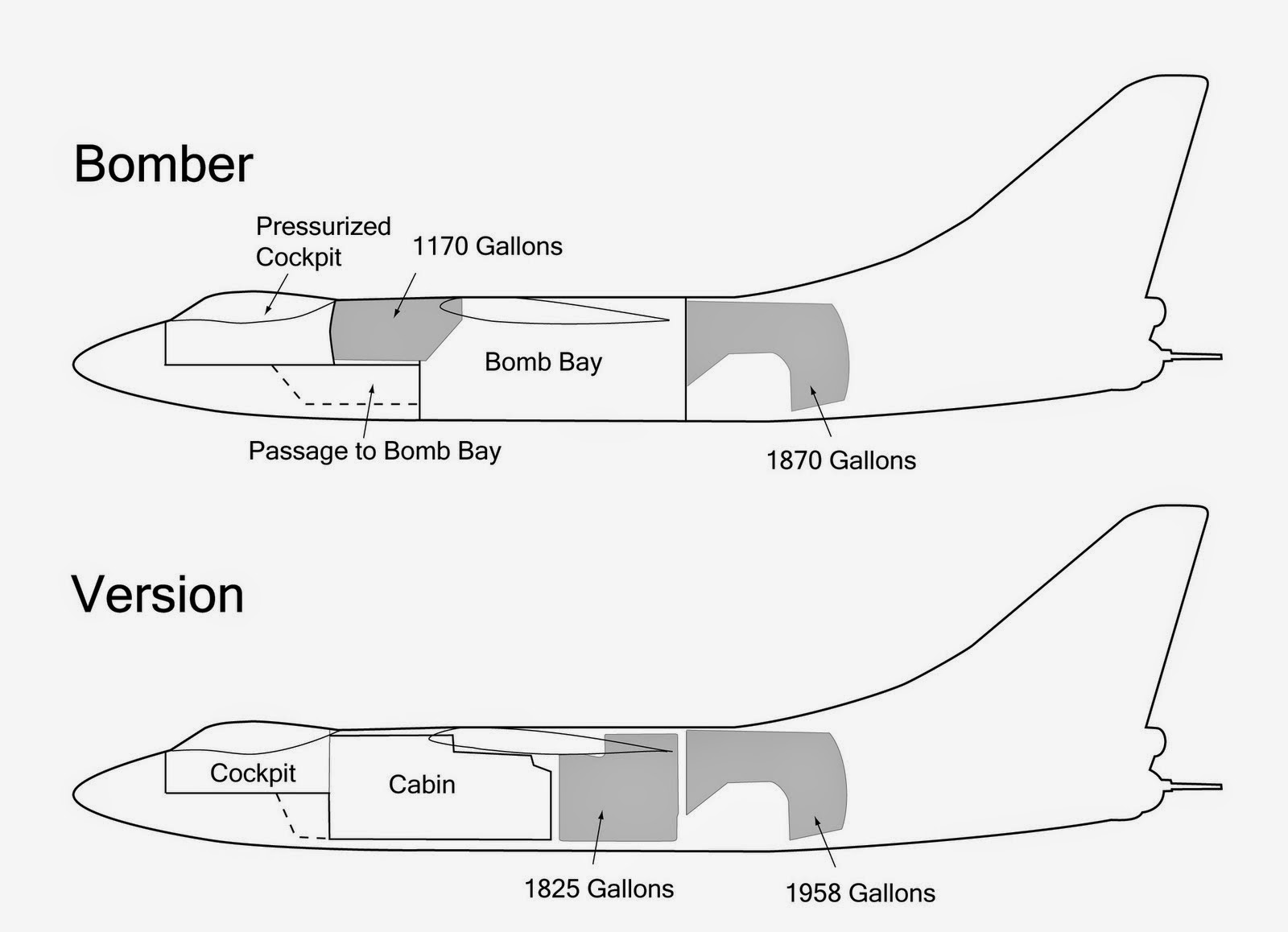 This is a crude illustration from a Navy manual of the major changes to a tanker that resulted in an EKA-3B. 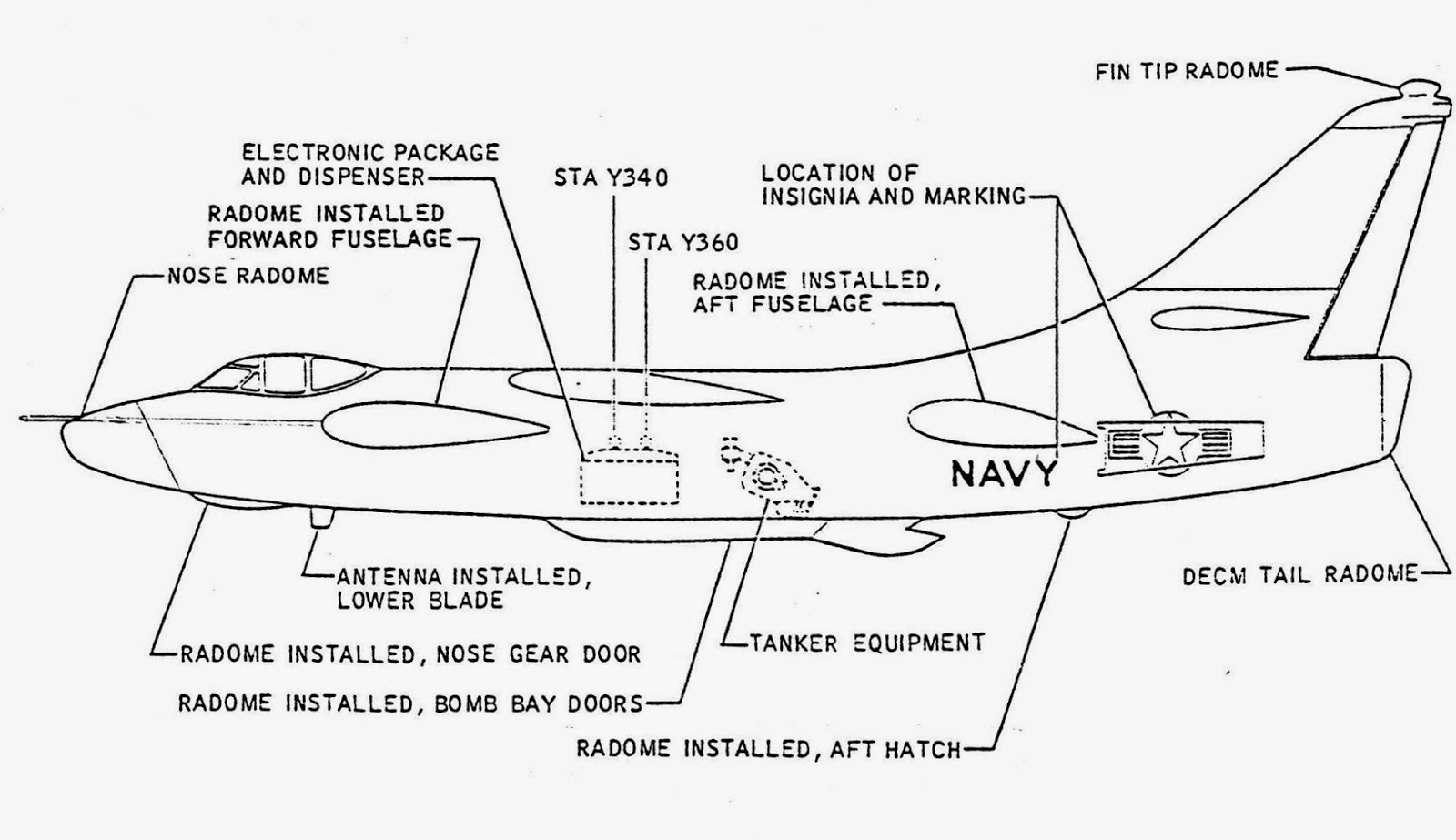 This is a late-configuration EA-3B (the original had a pod-type fairing on the top of the vertical fin and smaller fairing than shown here on the bottom of the fuselage.)

Note the windows for the cabin, the emergency-egress door on the side of the fuselage, and the different framing on the canopy associated with the increased cockpit/cabin pressurization of the versions.

For completeness at the risk of adding to the confusion, this is an ERA-3B, a photo-reconnaissance "version" modified with an array of radio/radar jamming equipment to provide ECM training for U.S. Navy warships. 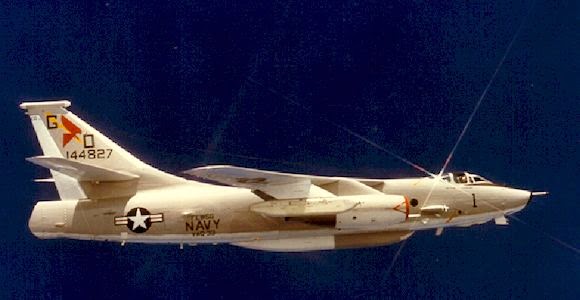 For more details on the A3D/A-3 family, see http://tailspintopics.blogspot.com/2010/09/mighty-skywarrior.html
Posted by Tailspin at 7:20 AM No comments: