A work in progress; more later:

I was surprised but pleased to see a release of excellent AJ 1/72 scale Savage decals from CTA (Cut Then Add), which is based in Moscow. 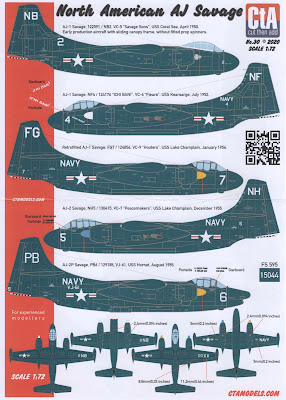 For more on this company's products, see https://www.ctamodels.com/

I was surprised mainly because 1/72 kits, with one exception, are hard to come by and building any of them has a higher degree of difficulty than the average kit builder might wish to cope with.

There are also accuracy issues, in part related to the differences between the AJ-1 and AJ-2 and among the AJ-2Ps.

The AJ empennage was redesigned after a fatal accident in flight test when a structural demonstration resulted in the empennage being torn off. The original one had a very large rudder, believed necessary for an engine failure shortly after launch and one-engine-inoperative wave offs (also see https://thanlont.blogspot.com/2010/11/one-if-by-land-two-if-by-sea.html). The vertical fin was enlarged in area, the rudder was reduced in area (but repositioned a bit farther aft to minimize the reduction in its control power), the dihedral was removed from the horizontal stabilizer, and the horizontal strake on each side of the fuselage above the jet engine tailpipe was removed. All surviving AJ-1s were retrofitted with this empennage and all AJ-2s were built with it.

Another change introduced with the AJ-2 (and later production AJ-2Ps) was a redesign of the flight deck. The AJ-1 had seats for two on the flight deck, the pilot on the left and the bombardier on the right. There was a third seat on the lower deck just across from the entry door. With the AJ-2, the third crewman's position was relocated to the flight deck in an aft-facing seat. This required that the canopy be raised and lengthened. The controls for the pilot were also changed from a stick to a control wheel and the throttle quadrant was moved from his left to the center console on his right.

The AJ-2 also had a modified hydraulic system. The only external indication of this is a two-piece nose landing gear door in place of the AJ-1's single rectangular door. 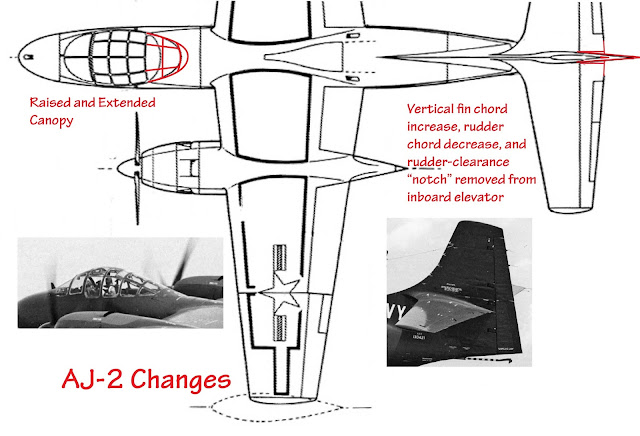 Unfortunately, these differences between the AJ-1 and -2 were not realized by kit manufacturers. There are five 1/72 kits:

You don't get much (basic shell and canopy, no landing gear, no propellers, no decals, etc.) and what you do get is pretty crude, particularly the canopy. With a significant amount of correction to the plastic provided and scratch-building/scrounging of detail parts, a presentable model from the "kit" can be created. 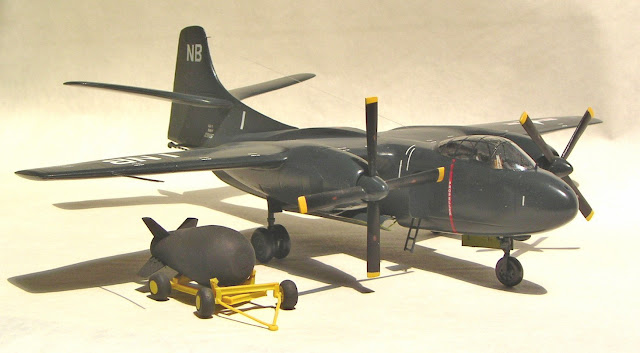 The Mk 4 bomb and trailer were from 12 Squared: good luck finding that. A drawing for scratchbuilding one is here: https://tailspintopics.blogspot.com/2011/07/getting-it-right.html

One interesting aspect of this model is that it looks about right even though it has major shape issues: for example, the wings are too thick but that is offset by the nacelles not being deep enough.

The late Gordon Stevens basically created the vacuum-formed kit concept, producing examples of airplanes that no injection-molded kit company would consider offering at the time. His products are also the standard for this kit type in quality and appearance. His AJ-2/2P is no exception, augmented by additions from Hannants. 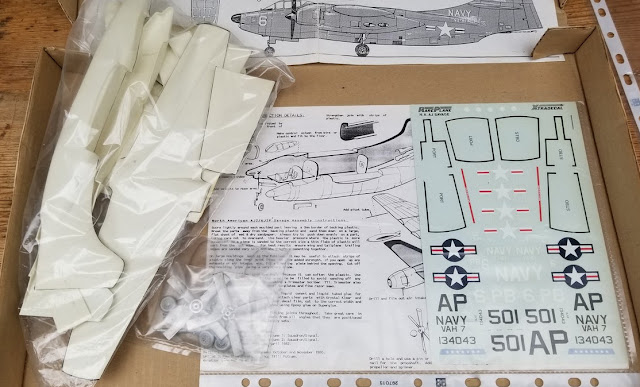 It has white metal details, excellent decals, comprehensive instructions, and fuselage halves that are actually the same size. Regrettably he did not have source material equal to his intentions and expertise and may not have been involved in the sourcing of the propellers, which are the kit's most obvious error: 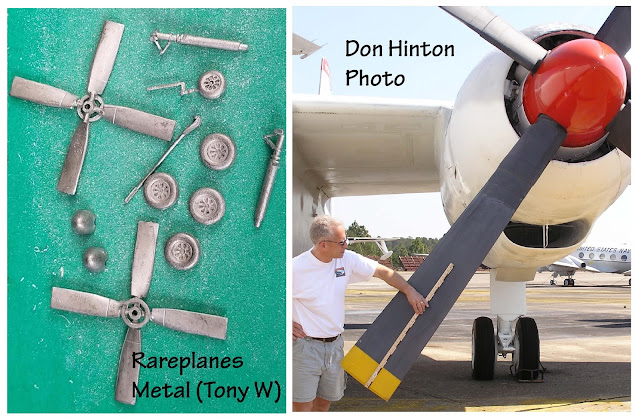 The propeller diameter is about right (a little undersized but then so is the kit itself) but the propeller blade tips should not be quite as wide and the width of the blades should then taper in a straight line (somewhat less than it looks like from head-on because of the blade twist) to the hub.

The drawings that he relied on were also inaccurate with respect to the vertical fin (the red outline is from North American's excellent AJ-1 side view; the green detail is the AJ-2 from North American engineering drawings and almost certainly indicates the correct location for the horizontal stabilizer):

An unforced error was that he assumed the AJ-2 canopy was the same length as the AJ-1's, just with different frames. As a result, it is a bit too short.

The kit is also slightly undersized but that's not a deal breaker in my opinion. Tony W currently has a build post on Britmodeler HERE. 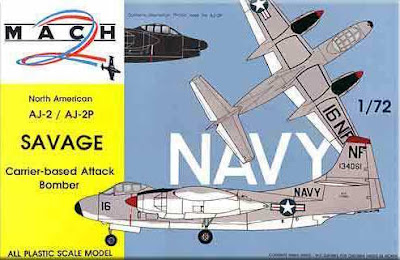 Mach 2 appears to have used the Rareplanes kit as a basis. The fuselage halves are virtually identical in size and shape, as are the wings and the nacelles, so it is slightly undersized as well along with a vertical fin that is not quite long enough. However, the clearish cast canopy is that of an AJ-1 or early AJ-2P (it's also awful; I reshaped it and used it as a vacuum-form master for my Airmodel AJ-1 build).

It is possibly better than the average Mach 2 kit and certainly buildable. Replacing the canopy requires some skill but the other issues like redoing the imaginary flight deck and reshaping the top of the vertical fin are straightforward. And it is still available

This is a model from the Mach 2 kit with a replacement -2 canopy (it looks like the one in the Rareplane kit, which came with two of them) on display at Mosquitocon in 2014 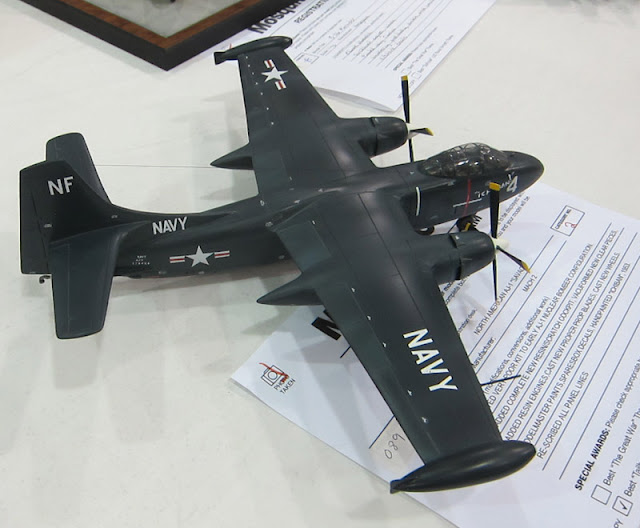 Up until the mid 2022 issue of an AJ-1 by Roden, this was by far the most complete AJ kit (full disclosure: I provided drawings to Anigrand for it and reviewed photos of the first casts). Note the cast canopy. The only flaw that I remember (the box is currently in the back of warehouse behind the Ark of the Covenant crate) is the tail hook.

This is what the AJ tail hook should look like: 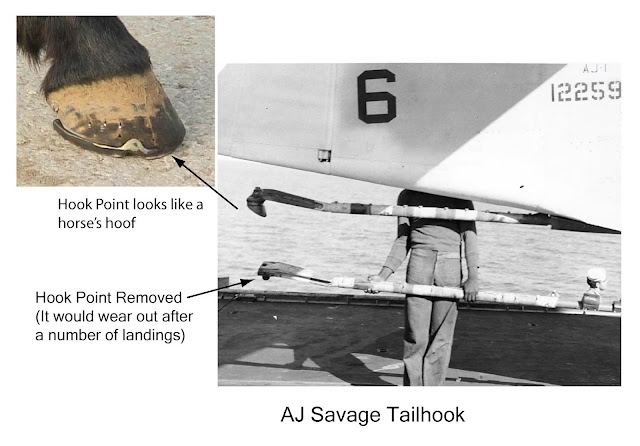 This is an Anigrand kit built by Brett R: 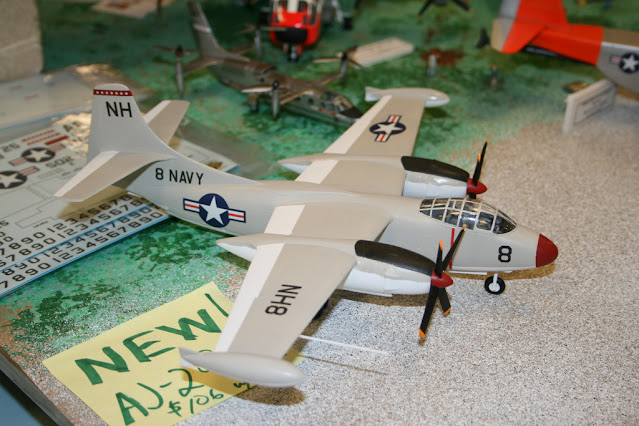 And another with a review by Scott Van Aken: https://modelingmadness.com/scott/korean/us/usn/aj2.htm

Nostalgic Plastic was the U.S. distributor for Anigrand and included extra decals and a CD with additional information and photos on the type that I created.

In order to minimize weight, North American provided the Savage with a cumbersome method of folding the wing and vertical fin. See https://thanlont.blogspot.com/2010/03/hell-it-wont-fit-ii.html and http://tailhooktopics.blogspot.com/2022/10/aj-savage-wing-and-fin-fold.html

Because of its size, aircraft carrier captains tended to prefer that the AJs be based ashore and only flown out to the ship (where nuclear bombs were stored for safekeeping) when the balloon was about to go up. However, after it was repurposed to be an airborne provider of jet fuel, its popularity increased significantly, particularly in the western Pacific where alternatives to landing back aboard the carrier could be few and too far between. See https://thanlont.blogspot.com/2013/12/texaco-redux.html