25 October 2017: Added a discussion (more than you probably want to know) of the nose landing gear here: http://tailhooktopics.blogspot.com/2017/10/fj-23-nose-landing-gear.html

24 October 2017: Added discussion of the shape of the upper nose.

At last, injection-molded kits of the North American FJ-2 and -3 Furies have been released, thanks to Sword Models (www.swordmodels.cz)! It's inexplicable to me why it has taken this long. The swept-wing Fury, like the iconic F-86 Sabre it was based on, is not only beautiful jet but it was dressed in the some of most colorful of 1950s and 1960s markings. Sword has released three high-quality and detailed kits: 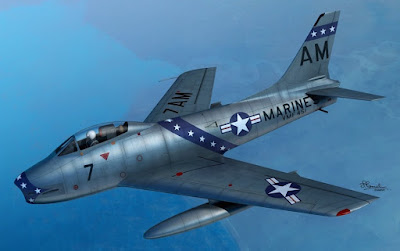 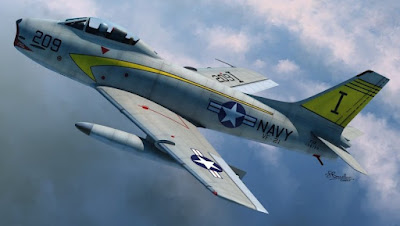 The FJ-2 kit has a different fuselage and wing than the -3 and -3M. The FJ-2 had a slightly smaller engine intake, a slightly less deep forward fuselage, and a slightly different air inlet on the after aft side of the fuselage. These differences are correctly represented in the kit rather than making do with the almost identical FJ-3's fuselage. The FJ-2's wing was similar in planform to the F-86E and early Fs with aerodynamically actuated slats. Again, instead of making do with a common wing, the FJ-3 and -3M kits have the notably different, later, so-called "hard wing" with the cambered 6-3 leading-edge extension (and teeny barricade snaggers, although the most outboard one wasn't included). For more on these differences, click here: http://tailspintopics.blogspot.com/2011/04/fj23-fury-redux.html

The FJ-2 was assigned to the Marine Corps and shore-based since it had retained the F-86's J47 engine but was burdened with an increase of about 1,000 lbs in empty weight for carrier-basing capability. It was also one of the airplanes assigned to the Navy's experimental bare-metal exterior project. These are the decals provided with the kit: 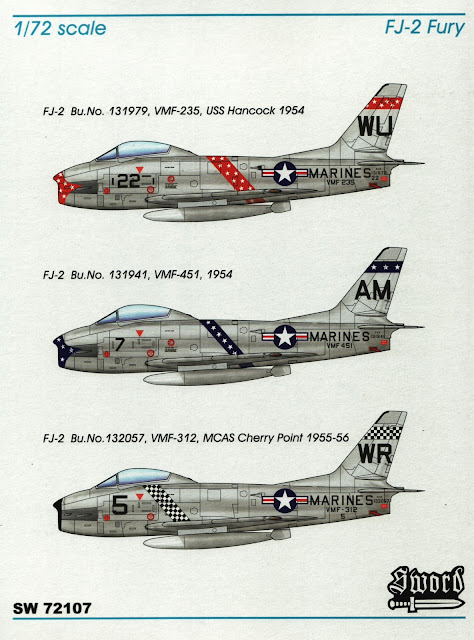 As far as I know, all the FJ-3s with the cambered leading edge 6-3 wing were painted gray and white (blue ones would have had the same slatted wing as the FJ-2). These are the markings in the FJ-3 kit: 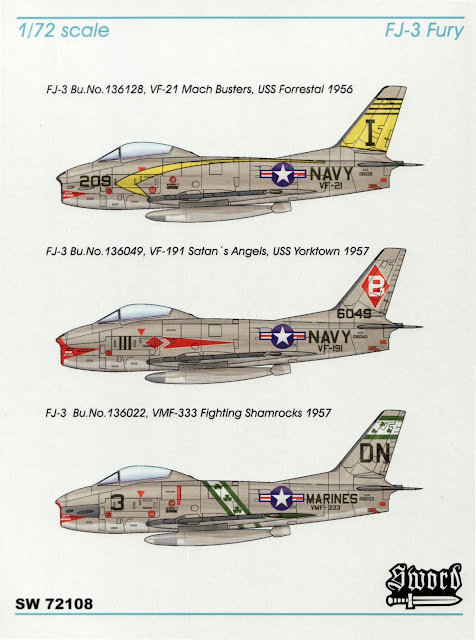 These are the markings in the FJ-3M kit (the only difference in the plastic from the FJ-3 kit is the addition of Sidewinder missiles and the associated pylons): 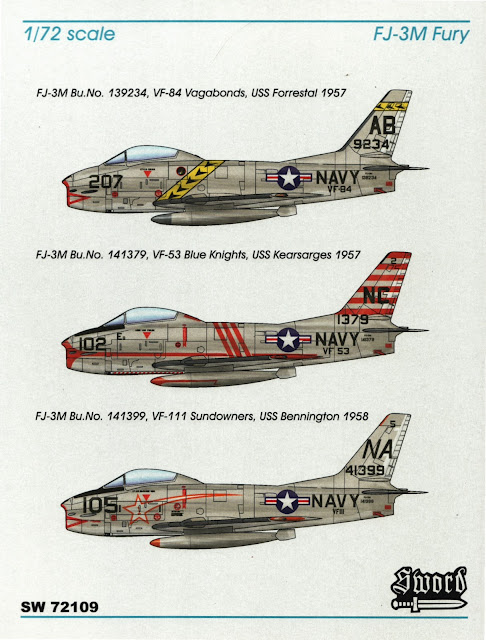 Both the -3 and -3M, but not the FJ-2, come with the inflight refueling probe and optional rudders and horizontal stabilizers that have the external ribbing on the trailing edge. (The rudder was an early change; my understanding is that few if any FJ-3s had the ribbed stabilizer when they were assigned to deployable squadrons.)

If you're thinking that not coming from a Japanese model kit manufacture means these must be short-run, relatively crude moldings with 1/4-inch sprues,  you will be very pleasantly surprised. The control surface and panel lines are engraved and petite. All the many detail parts such as the pitot look as close to scale as can probably be done in 1/72. The canopy is injection molded in two parts and clear. The ejection seat consists of two pieces, seat and headrest, with very fine face-curtain handles and knee guards (however, it is missing a cushion, backpack parachute, and straps). I haven't checked the fit except for fuselage halves and the wings but so far, so good except that the trailing edge of the wings will require some work to be reasonably thin enough.

I regret to report that the kits are not quite perfect in size and shape. The most notable (but not to the eye) is that the fuselage of both the -2 and -3s is about 3/16 inch (5 mm in 1/72; 13 inches full scale) too long due to a misunderstanding about a length measurement. Since the error is pretty much spread along the fuselage, it would be a lot of work to correct and in any event, really isn't noticeable.

What is slightly off and noticeable, at least to my eye, is the nose. It doesn't appear to curve downward enough, the lower intake lip seems to protrude slightly forward, and the inlet is too far forward relative to the cannon ports (which some don't think angle downward enough):

This is another assessment of the upper nose shape based on a pretty good NAA FJ-3 drawing compared to a Craig Kaston photo of a museum's FJ-3 (it looks like the top of the nose curves down a bit too much in the drawing) and the Sword FJ-3 forward fuselage. You'll have to ignore interior detail not matching up due to distortion and the slight stretch in the Sword fuselage.

There appears to be, however, enough plastic in the inlet to cut it back and reshape it if you desire, which also solves the problem of the cannon ports appearing to be too far aft of the inlet lip. Here's one possibility for the -3: 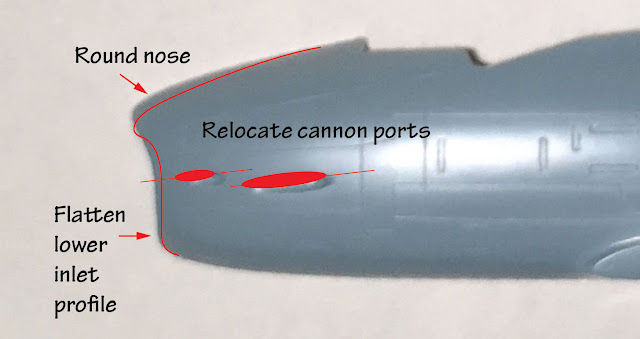 Note that the cannon ports are supposed to be angled downward at 6.5 degrees. The -2 inlet was a little less deep, which the Sword kit represents. 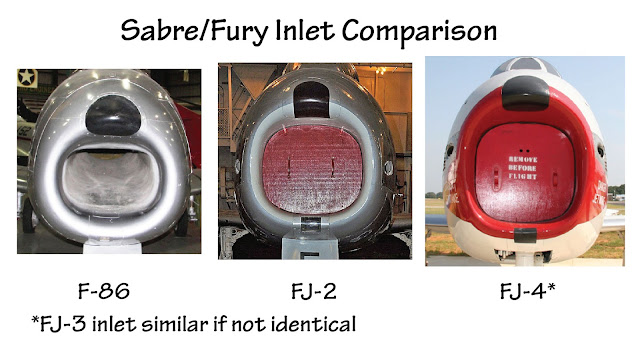 Note that the top of the inlet curves down from the outer edge of the lip notably more than the sides curve in or the bottom curves up.

There are some other nits that have been discovered so far. For one thing, the FJ-2 fuselage (but not the -3s) has some "bumps" or bulges that should be removed.

Some wish that Sword had produced the FJ-2 wing with separate slats, since being aerodynamically actuated, they were almost always extended when the Fury was parked or even taxiing. Note that although this was also the static configuration of the F-86's slatted wing, very few kits of the Sabre have this feature either.

Also the nose landing gear was presssurized for catapult launch to for a greater nose-up attitude. 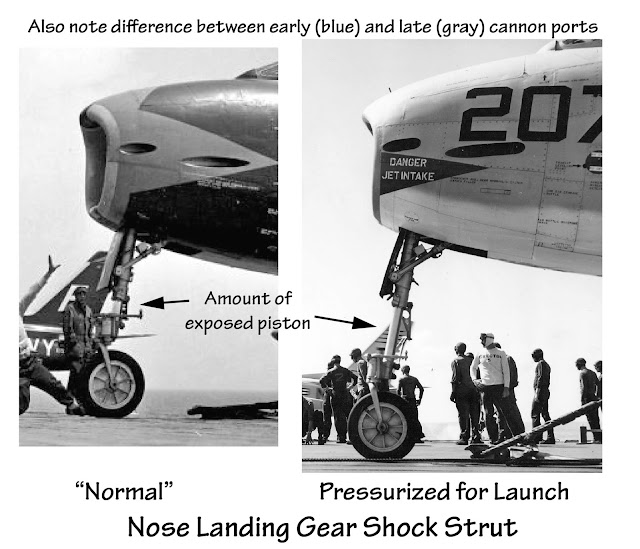 However, the strut might also also be extended at other times for other reasons...

There are several threads running in Britmodeller that discuss the kits, with particularly informative and detailed posts by Sabrejet. There are links to a couple of them in my FJ-2/3 post for which  a link is provided above. Searching the Britmodeller website (http://www.britmodeller.com/forums/) will uncover more.