There were at least three different suppliers of the F-4 370-gallon external tanks that were slightly but clearly different externally. See http://tailspintopics.blogspot.com/2013/06/things-under-wings-f4h-f-4-phantom.html

Few F-4 kits provide the original McAir tank, which did not have a constant diameter at any point from either end to the middle and did have flanges on both sides at the midpoint of the tank. Jeffrey Kubiak of Hypersonic Models has stepped into the breach: 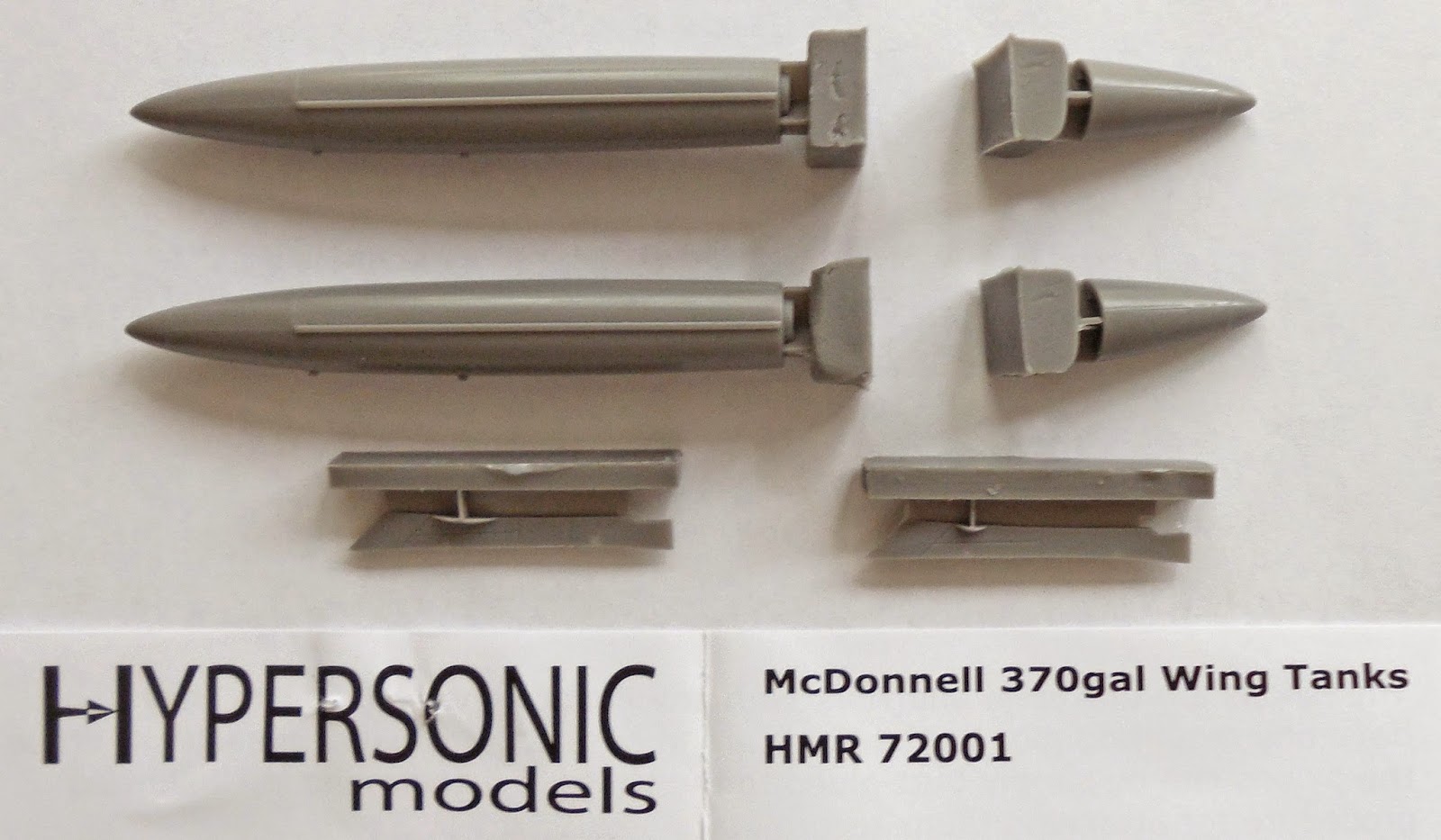 These are 1/72 scale,  accurate in size, and include the handed pylons to which the tanks were attached. The resin in my example, provided by Hypersonic, was flawless. (These are also available in 1/48th.)

Hypersonic also created a 1/72 set of the Navy outboard pylons required for other external stores, also handed (because of their attachment to an angled wing spar) and excellent.

Both kits come with detailed installation and painting instructions.

This is Hypersonics website: http://www.hypersonicmodels.co.uk/
Posted by Tailspin at 7:13 AM No comments:

One of the topics of conversation at the excellent IPMS National (U.S.) Convention this year, at least among the folks I talk with, was the ongoing lack of a good injection-molded 1/72 (or any scale, for that matter) FJ-3. Note: I have provided material on it whenever asked and a previous post, http://tailspintopics.blogspot.com/2011/04/fj23-fury-redux.html, illustrates a lot of the detail differences in its configuration over time.

Since there is a pretty good 1/72 F-86H kit available and it has a bigger inlet like the FJ-3 (it had a more powerful engine), there has recently been a discussion as to whether it would be a suitable basis for conversion. Suitable, of course, varies by individual, ranging from minor alterations to, as the late, great Bondo said, "practice bleeding".

Herewith an illustration of the basic differences (the F-86H has the wing-tip extension and many detail differences but that's no hill for a stepper; the basic empennage is pretty close): 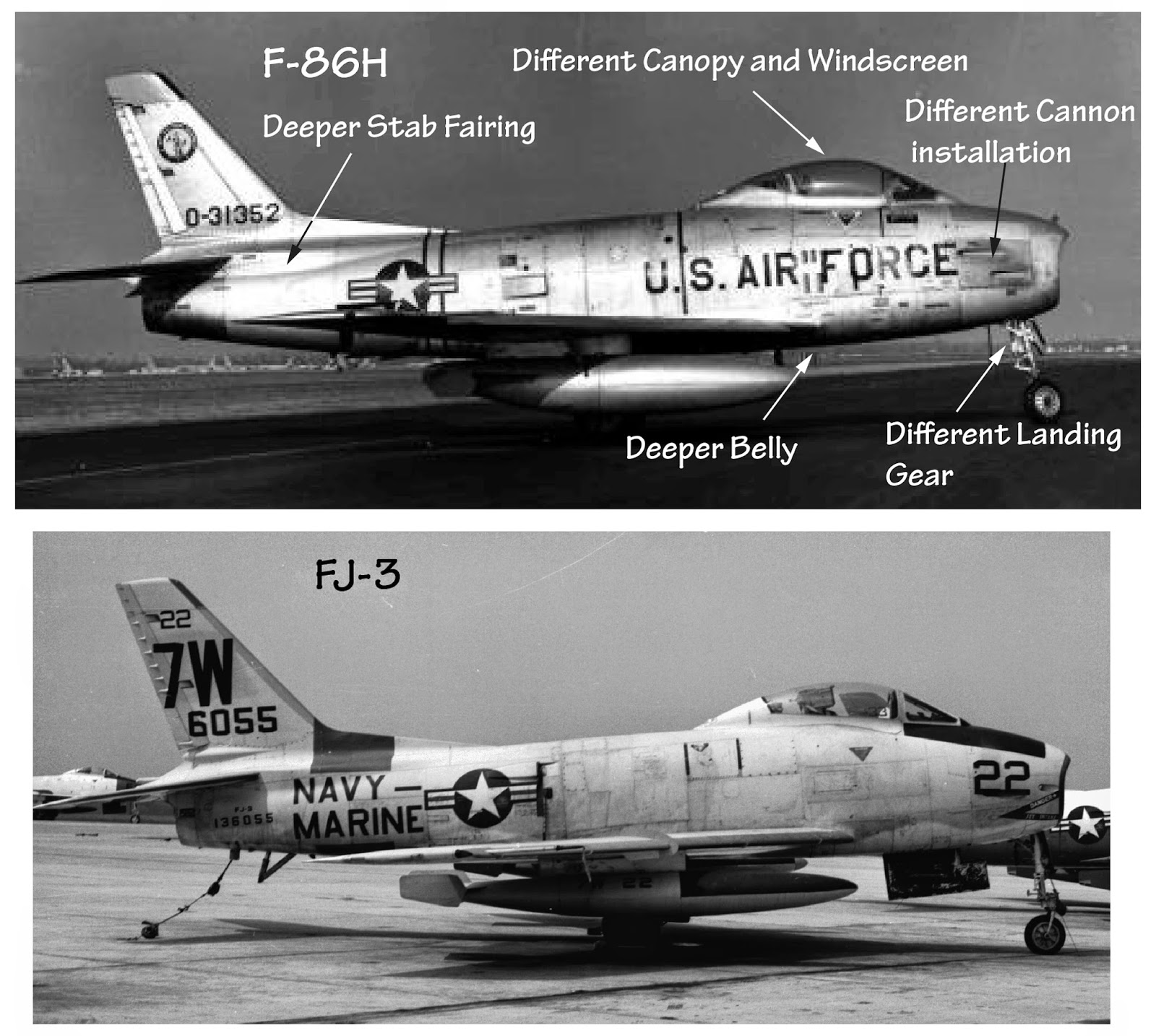 So far, so good. A comparison of the North American drawings illustrates some of the shape and size differences in profile. The FJ-3 lines are in general less dark; I didn't bother to determine if either drawing needed to be resized vertically for accuracy. However, it's pretty clear that the F-86H has a deeper fuselage in addition to being longer.

The consensus was that if you just had to have an FJ-3 now, the Falcon conversion (which is still available) is the better bet; it consists of fuselage halves and a pretty good canopy but no decals. This R.J. Tucker's build combining it with an Academy F-86. Note that the F-86 horizontal tail might be too small. See more photos and a summary of the build here:http://www.arcair.com/Gal1/101-200/gal142-FJ3M-Fury-Tucker/00.shtm

Print Scale put a couple of FJ-3 schemes on an FJ-4 sheet: http://www.internetmodeler.com/scalemodels/nraviation/Print-Scale-1-72-FJ-Fury-Decals.php

As of this writing, the Falcon conversion is available from Hannants and Falcon (click HERE). I couldn't find it on the Squadron or Sprue Brothers website. 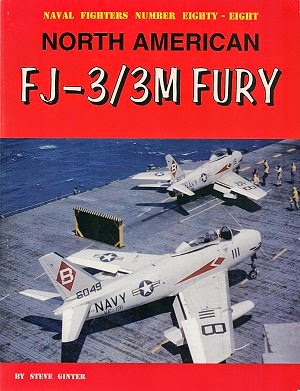 In addition to this blog and one on Naval Aviation History (http://thanlont.blogspot.com/), I also occasionally post articles on my Draft Tailhook Topics blog (http://tailhooktopics.blogspot.com/). My original intention was to create articles there and then when they were ready for prime time, post them here. It didn't work out that way. For one thing, copying and pasting into Blogger using a Mac sometimes (often?) resulted in a string of format instructions, visible only in HTML, that caused Windows operating systems to hang at that point, a condition that I would be unaware of until one of my more diligent readers brought it to my attention. As a result, I usually just link to a post there when it provides more information about the subject of a post here.

So if you find interesting things here, you might find more there. In some cases, it was just a convenient place to post answers to questions that were raised on modeling websites, like F9F Panther and Cougar ejection seats, http://tailhooktopics.blogspot.com/2014/07/grumman-f9ff-9-panther-and-cougar.html.
Posted by Tailspin at 5:27 AM No comments: