The Douglas A3D-2 Skywarrior was in service for a long time. Even after it was no longer being deployed as either a Bomber or a Version, it served on as a airborne testbed for several different programs.

The pretty much useless 20mm tail guns had been replaced by the "dove" tail with Defensive Electronic Counter Measures (DECM) capability. Provisions for a refueling package in the aft end of the bomb bay had been added (it could still drop bombs). The JATO bottle attach points had not yet been taped over (and are not provided on the Trumpeter kit). Small fairings for DECM antennas had been added to either side of the nose landing gear well and another added on the landing gear door itself. However, the airplanes retained the original nose. This particular A3D does not have the inflight refueling probe but it would have had provisions for it.

The addition of the dove tail required a cooling inlet to be added to the leading edge of the vertical fin.

This is a picture of either brand new or fresh from overhaul A3D-2s. 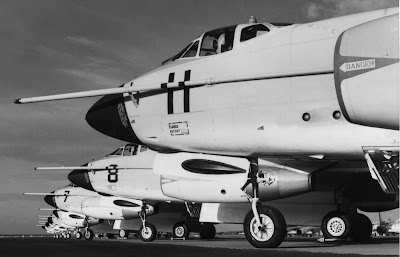 Note the antenna fairing on the nose gear door and the one beside the nose gear well (there was also one on the other side). The sextant installation has been made semi-permanent over the aft-facing seat with the addition of framing and a clear bubble in the left rear area of the canopy. In this case the bubble has a protective cover. Note also that the wheel brakes are pretty much flush with the hub, which was a Bomber characteristic. (See http://tailspintopics.blogspot.com/2013/05/douglas-a3d-skywarrior-main-landing.html) Another detail associated with the Bomber are the two Air Turbine Motor outlets on the side of the fuselage.

There were detail variations even on the same deployment. 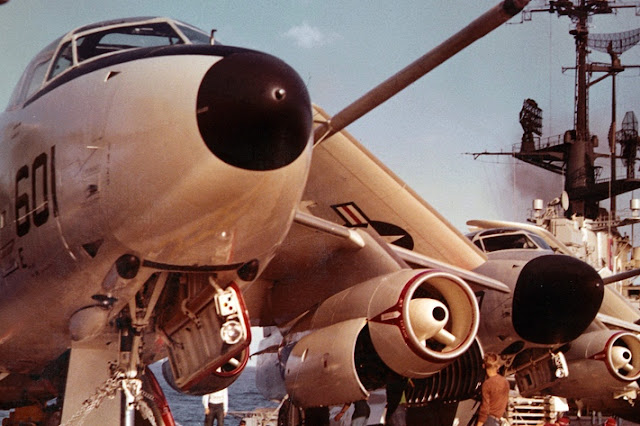 The A3D-2 on the left has a black anti-glare area and the radome is mostly gray/white with a black neoprene cap for erosion protection. The DECM antennas are not all black. (Note also the fairing for the bombardier's periscope has been swung back to its aft position, exposing the periscope bubble.)

The A3D-2 on the right has a dark gull gray anti-glare area and the radome and DECM antenna fairings are all black. Another possible difference in the painting of these mid-life aircraft is the change to a white rudder. They were originally gray when the gray/white scheme was introduced.

Whether or not the airplanes had the cambered leading edge or original wing or the big or small fuel vent was strictly dependent on its Bureau Number. See http://tailspintopics.blogspot.com/2010/09/mighty-skywarrior.html

I've posted some notes on the kit here that are based photos of the parts and instructions that are on line: http://tailhooktopics.blogspot.com/2013/05/trumpeter-148-a3d-2-skywarrior.html 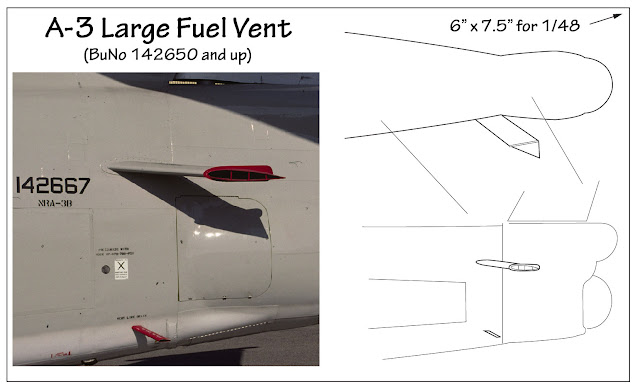 The change coincides with the introduction of the tanker kit in production. It must not have been changed for a particularly important reason, since it doesn't seem to have been retrofitted to A3Ds before BuNo 142650, even on Skywarriors that have the tanker kit installed.
Posted by Tailspin at 11:27 AM 1 comment:

A few of the details on the forward fuselage seem a bit off to me: 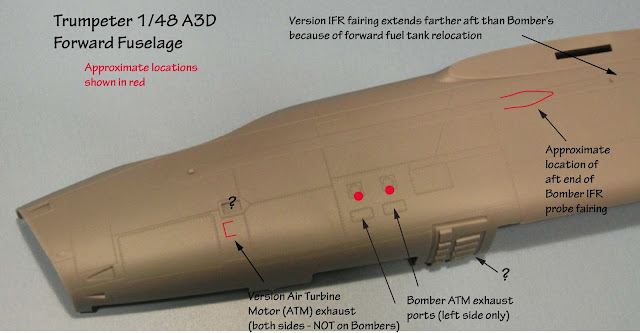 Here is a photo of the forward fuselage of KA-3B Bureau Number 142244 showing the location of the ATM exhaust ports and the aft end of the IFR fairing.

The questioned raised rectangles on the belly are associated with the bomb-bay anti-buffet fence. It proved necessary to keep the bombs from rattling around in the bomb bay after release rather than dropping cleanly away. It was normally, but not always, extended when the bomb bay doors were open.

For some reason, there is a version of the fence without the outboard separated "finger". The oval opening is at the center line of the fence. On the left side there is a raised exhaust vent on the outer surface of the fence but I don't have a good picture of it at the moment. 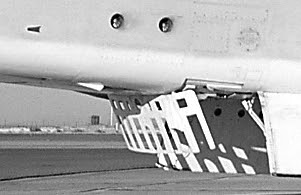 Hopefully the Trumpeter kit includes a separate fence that fits over the raised rectangles.

Note also that the most outboard rectangular opening is there to expose the catapult hook well.

Here is a picture of the right side of a Bomber forward fuselage that illustrates a couple of nuances. It has both the early sextant opening on the right side of the canopy and the later "bubble" on the left side, which is not common. There are a couple of long narrow external patches on the lower side of the fuselage (the skin wrinkled noticeably there on the catapult stroke; you can see evidence of it here).

The "button" on the tip of the nose was a sensor that provided total temperature to the "bomb director system".

Compare the picture above with one of a TA-3B, which was a Version, the nickname give to non-bombers. 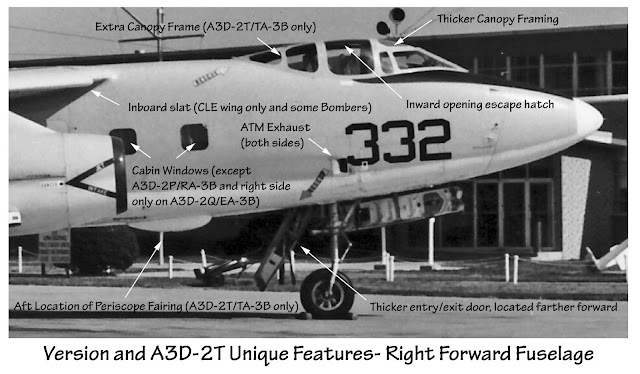 That should provide some insight into the difficulty of establishing the correct configuration for a particular A3D, be it Bomber or Version. For a more detailed synopsis, see http://tailspintopics.blogspot.com/2010/09/mighty-skywarrior.html

A comparison of the Bomber versus Version entry door thickness, location, and angle: 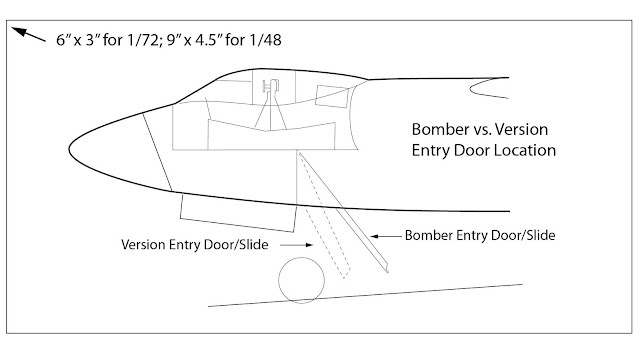 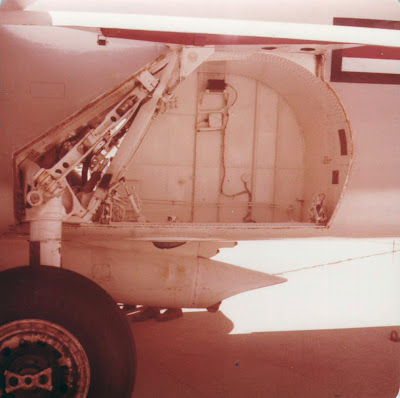 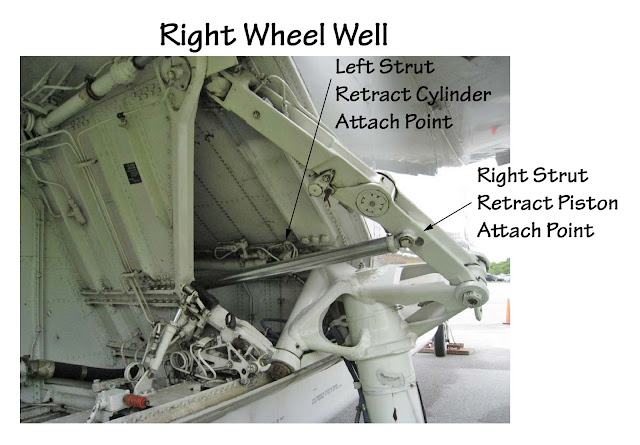 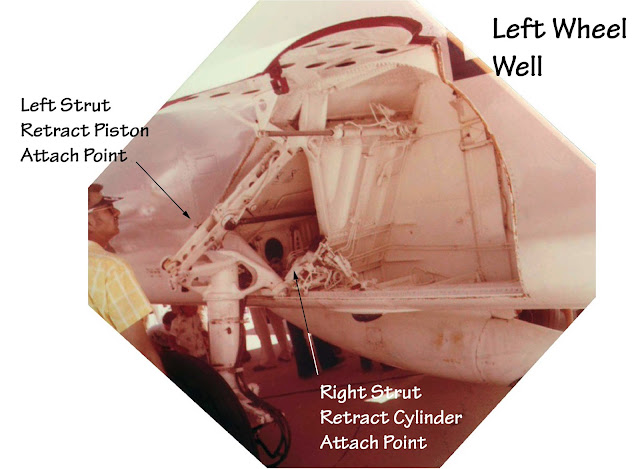 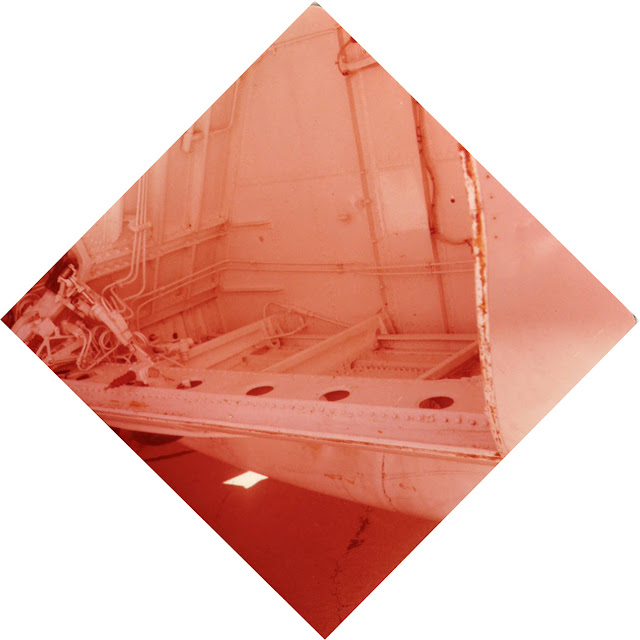 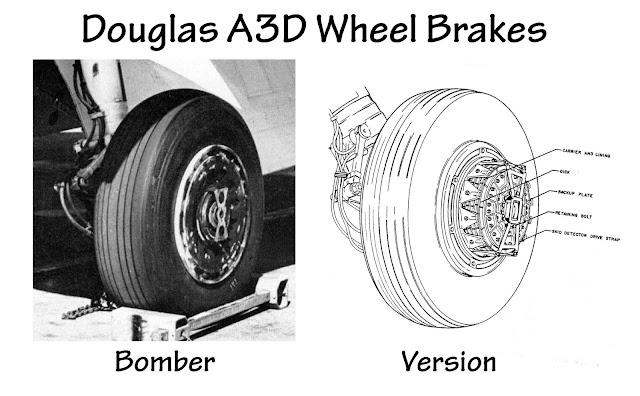 I don't know why the Version brake extends farther from the hub than the Bomber's. Both had antiskid.  It may be that more powerful brakes were thought to be needed on the Versions since they might have been considered to operate more from land bases than the Bomber. It does appear that no Bomber was ever retrofitted with the Version-type brakes.
Posted by Tailspin at 4:30 PM 2 comments: