Compromises and innovations were necessary to accommodate the operation of jets from aircraft carriers. One of the enabling practices was inflight refueling. One approach was the development of a buddy store that could be added with minimal modification to any carrier-based airplane with an external stores capability. For the background on this, see http://thanlont.blogspot.com/2013/10/texaco.html and http://tailspintopics.blogspot.com/2011/07/douglas-low-drag-external-fuel-tanks.html.

There were originally two buddy stores used operationally, one developed by Douglas, which used the model number D-704 (D for Douglas, not design) and the other by North American, which was only used on the FJ-4B Fury. The Navy subsequently procured a virtually identical, lower-cost store manufactured by Sargent Fletcher, which also produced external tanks (see http://tailspintopics.blogspot.com/2013/06/things-under-wings-f4h-f-4-phantom.html). Sargent Fletcher subsequently designed an improved store, the A/A42R-1. 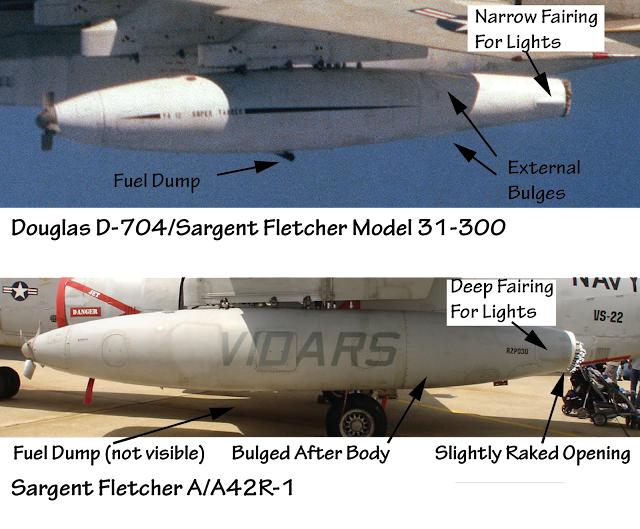 The external bulges on the original store were necessary to provide clearance for the hose reel.

For some reason, the bulges on the upper half of the store were larger than the ones on the lower half. 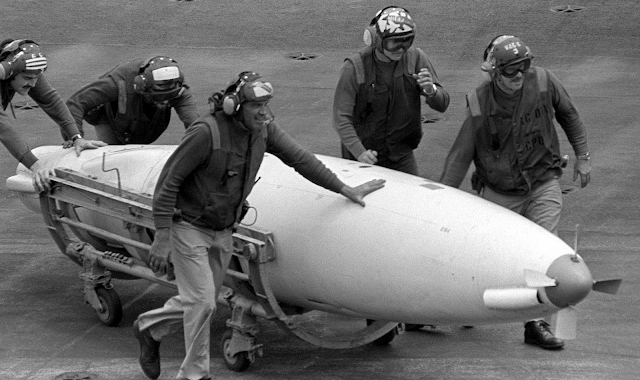 There were two aft-facing status light on the original store. The left light was amber (yellow) and the right, green. When the basket had been reeled out and the store was ready to transfer fuel, the amber light went on. After the receiving pilot plugged into the basket and moved forward three to six feet, the amber light went out and the green light came on, indicating that fuel was flowing from the store. 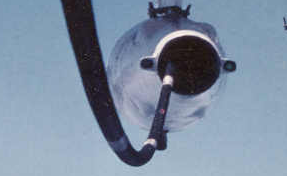 Rick Morgan provided the following pictures which complete a walk-around set of the "D-704" store (he also reported that in the fleet, even the latest version from Sargent Fletcher is referred to as a D-704. 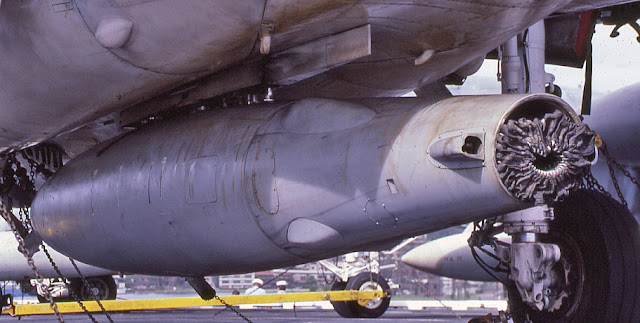 The original Sargent Fletcher store was used through at least 1985 based on this photo provided by Rick Morgan.

Note that the dedicated KA-6D tanker would often carry a buddy store as a backup in case its internal, aft-fuselage mounted system went "sour".

The afterbody of the later Sargent Fletcher store was modified to eliminate the bulges. The change resulted in a discontinuity in the exterior shape at the beginning of the hose-reel section. The opening in the aft end of the store was also slightly raked so it was at an approximately 90-degree angle to the basket as it was reeled in and out.


Just barely visible on the bottom of the store is the jettison tube for dumping fuel from the store if required. 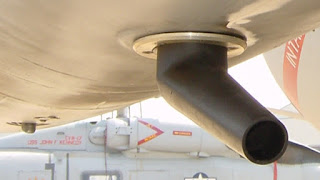 Jim Rotramel Photo
This was a feature on the S-3 installation only. The opening is covered by a blank plate on the F/A-18E/F.
Another notable change to the later store was the fairing for the status lights on the after body. It had a deeper fairing for an additional light. 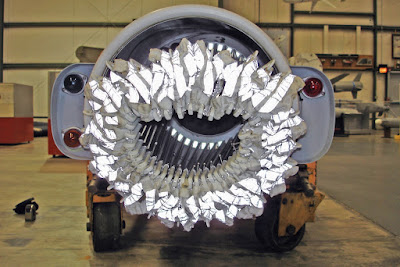 According to Jim, there were at least five different versions of the later store, which is still in use. The first three were specific to A-6, S-3, and F/A-18E/F; the differences were internal. The next two incorporated a redesign of the Ram Air Turbine propeller hub on the nose of the store. 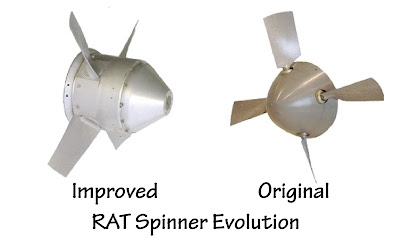 Note: the Wolfpack kits provide both types of RAT hubs
Posted by Tailspin at 2:23 PM