I turn out to be wrong yet again. I knew that the F2H-3/4 tip tanks had a capacity of only 170 gallons compared to the -2's capacity of 220 gallons and therefore imagined that the -3/4 tanks were smaller. It sort of looks that way.

My guess is that the -3/4 tanks appear to be smaller because of the airplane's longer forward fuselage and tail cone and the increase in wing chord inboard of the fold line. However, I'm now all but certain that the tanks are the same size and shape. They are different, however. The -2 tank was mostly fuel; the -3/4 tank was comprised of what I'll call a capsule, with fairings added on the front and back, so it held less fuel. The only notable external difference was that it had prominent flanges and fewer filler caps/access panels. 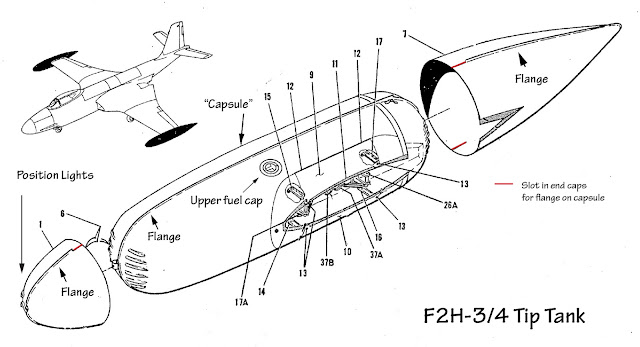 Another feature shared with the -2 was that a tank could be installed on either wing tip without modification. That's why there are filler caps on both the top and bottom of an installed tank and two position lights on the nose of the tank, one for red and one for green depending on which side it is installed.

Note that the F2H wings could not be spread or folded with full tip tanks so the filler caps had to be at top dead center when the wings were spread regardless of which side the tank was mounted.

Because it had more internal fuel and smaller capacity tip tanks, the F2H-3/4 was often seen without tip tanks. A smooth wing tip could also be installed in place of the one on which the tank was mounted. 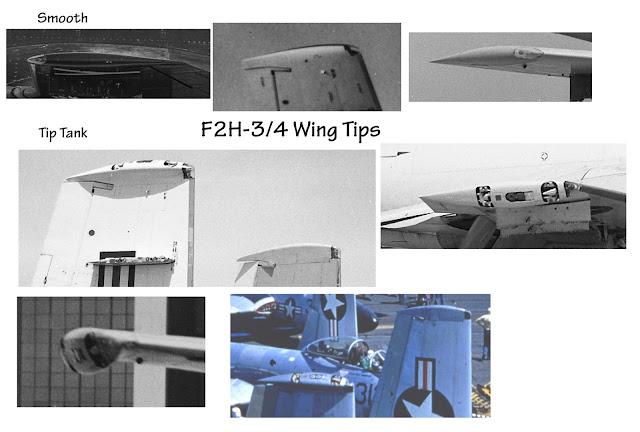 For modeling notes on the Banshee family, see http://tailspintopics.blogspot.com/2009/12/f2h-banshee-modeling-notes.html
Posted by Tailspin at 2:30 PM No comments: