Are You Going To Believe Me or Your Lying Eyes?

VAH-4 reportedly initiated the marking of its A3D tankers with large black stripes on the fuselage to make a specific one easy to identify in the event there was more than one in the vicinity of an airplane that needed infllight refueling.

The number of stripes generally coincided with a single-digit side number or when VAH-4 became VAQ-131, the last digit of a 61X side number as shown above. The tip of the fin was generally painted maroon in accordance with its presence as a detachment in the air wing. The fairing on the aft end of the fuselage was invariably white as far as I knew from looking at many pictures.

I was therefore surprised to see this profile in Rick Morgan's excellent A-3 monograph, just now available (http://thanlont.blogspot.com/2015/03/new-a3da-3-skywarrior-monograph.html):

Of course, an illustration might be in error, even when drawn by the estimable Jim Laurier who did the ones for this monograph. There is a reproduction of a cruise-book color photo on line of this airplane that shows blue stripes, but again, a scan of a printed photo might be subject to color distortion. (All the other atypical details were obvious in the picture.) Perhaps Jim used it for the profile, including the stripes that appeared to be blue?

And then a modeler called my attention to this photo:

(It's from an excellent Japanese web site, http://www.gonavy.jp/index.html, and credited to "toksans" with the date February 1968.)

Rick Morgan reports that the other two Whales on this Tico deployment were Bureau Numbers 138951 and 142239. The former had side number 11 and a single red stripe with a red tail fairing. The latter had the side number 12 but he's not seen a picture of it.
Posted by Tailspin at 11:35 AM No comments: 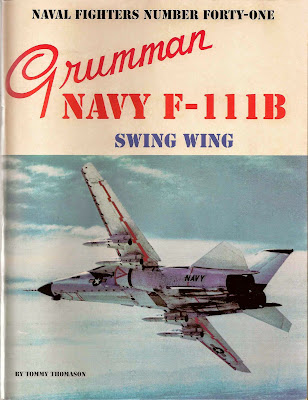 When you combine my F-111B monograph (http://thanlont.blogspot.com/2008/05/grumman-f-111b.html) with the errata document (available by email to tommythomason at sbcglobal dot net) and the following posts, that's pretty much what you'll have.

Posted by Tailspin at 7:43 AM No comments: