Paul Boyer asked me what the long probe was for on the right wingtip of most, but not all, Demons. 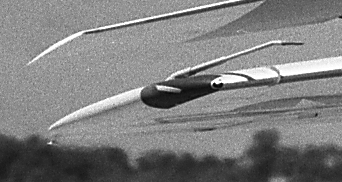 It looks like a pitot (measures total pressure) but is actually one of three static-pressure sources on most F3Hs (the pitot on all but the F3Hs with the single piece windscreen is at the base of the windscreen). It provides static pressure to some systems all the time and the altimeter and rate-of-climb indicator above 225 knots because its measurement of static pressure is more accurate then.

I wasn't able to determine when it was added. However, it is not on early F3Hs.

From a modeling standpoint, it appears that if the Demon to be represented has the lateral-control spoilers (see http://tailspintopics.blogspot.com/2019/04/sword-172-f3h-demon-kits.html) and the inflight refueling installation (although it was sometimes removed when the airplane was shore-based, so that's not a sure thing), it probably has the wingtip probe.

While rereading the flight manual, I was surprised to find that the ailerons and spoilers did not provide lateral control at the same time as I had assumed (the speed at which the spoilers take over roll control is only given in the classified portion of the flight manual). The Pensacola Museum F3H errs in having both spoilers raised.

For this and probably much more than you want to know about the spoilers, see http://tailhooktopics.blogspot.com/2022/05/mcdonnell-f3h-demon-roll-control.html

My other posts on the F3H:

You can't do better from a reference standpoint than the Detail & Scale digital or print monograph: http://www.detailandscale.com/f3h_demon_digital_book.html