Douglas built less than 300 A3D Skywarriors but its family tree had many branches. For a summary, click HERE

Phil Clayton is building the Trumpeter ERA-3B kit with the Steel Beach update set and asked for clarification on the location of some of the details. That led me down the usual rabbit hole of research in the process of resolving some issues that I uncovered in the process of answering his questions.

I hadn't spent much time on the ERA-3B (not to be confused with the EKA-3B, which was a derivative of the bomber) because it was restricted from carrier operations and fulfilled a vital but peripheral Navy mission, training the crews of Navy ships and aircraft to operate in a hostile electronic-warfare environment.

All eight ERA-3Bs were originally delivered as A3D-2Ps, a photo-reconnaissance "Version" of the A3D-2 bomber. Like the other Versions, the interior had been permanently rearranged to provide a cabin aft of the cockpit. 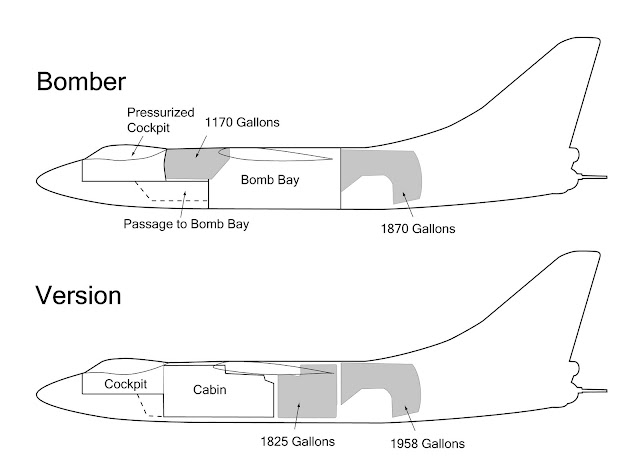 In the case of the A3D-2P, the cabin was divided into two compartments, one for cameras and the other for photo-flash cartridges and bombs, separated by a bulkhead. 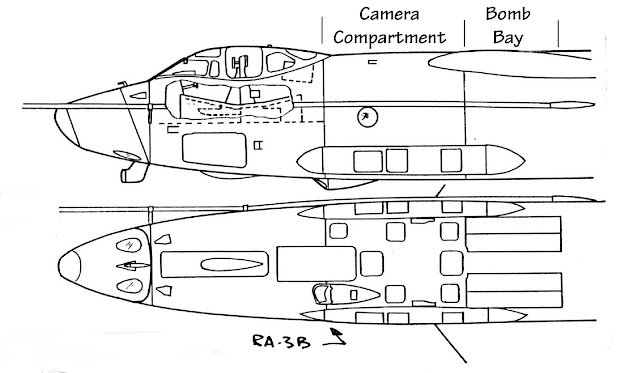 Another distinctive feature was the addition of a periscope sighting system providing a downward view through windows on the underside of the radome. 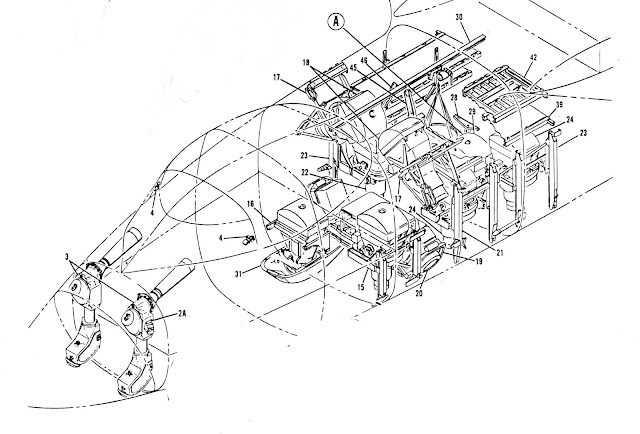 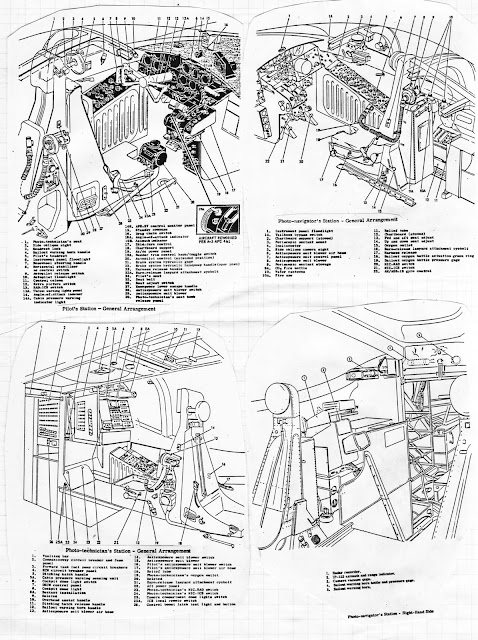 The long narrow fairing on the lower side of the fuselage housed the doors that could cover the camera ports as did similar ones on the belly.

When the RA-3Bs began to be supplanted by the supersonic RA-5Cs for reconnaissance, four were repurposed in the early 1970s to be ERA-3B electronic-warfare aggressors, BuNos 144827, 144832, 146446, and 146447. Note that the last two were delivered with the Cambered Leading Edge (CLE) wing, readily identified by the addition of a leading edge slat between the wing and the fuselage. 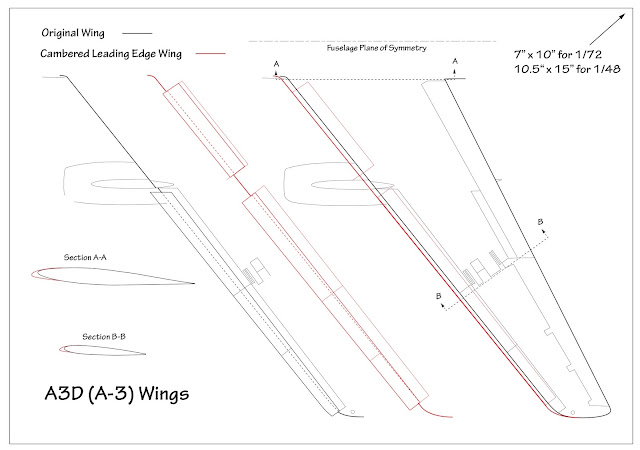 The major external modifications were the addition of a "canoe" on the belly like the EA-3B's; four ram-air turbines, two on each side of the fuselage, for additional electrical power; a extended aft fuselage for chaff dispensing; flare/chaff dispensers on the lower sides of the aft fuselage; and several antennas.

Side-facing crew seats were added for two equipment operators in the cabin. 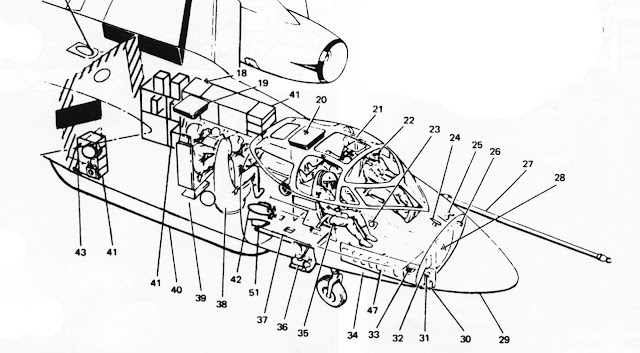 The starboard flash bomb-bay doors were secured. The door actuators were unpinned from the doors and door locks were installed if I remember correctly.

The port doors could be actuated externally by either a selector valve when hydraulic pressure was applied or a small hand pump. They were (now) access "panels" for the removal and installation of the ALT-40 and ALR-75 systems equipment."

An escape hatch (19 above) was added above the aft compartment. 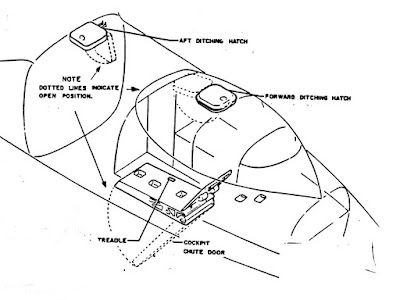 In the early 1980s, four more RA-3Bs were converted to the ERA-3B configuration, BuNos 142668. 144838, 144841, and 144846. However, these appear to have been delivered with a smaller canoe, a different aft fuselage extension, different antennas mounted on the sides of the fuselage in four locations, and a different antenna under the nose.

Of the original four ERA-3Bs, at least BuNo 146446 and 7 were converted to this configuration.

An excellent walkaround of a moldering 146447 by Bill Spidle can be found HERE. Note that its RAT hubs and propellers have been replaced by conical fairings. It was not unusual to see one or even two RAT pods on operational ERA-3Bs with a fairing instead of the RAT.

The Trumpeter A-3 series continues to disappoint. A detailed build article of the ERA-3B kit (the early configuration) by Philip Cavender is provided HERE 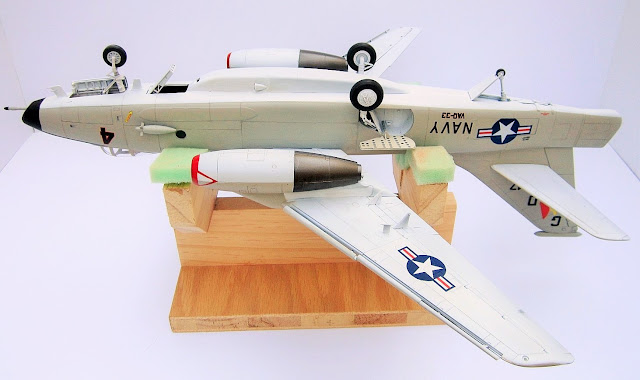 Note that it's missing two of the four RATs and numerous antennas. Not apparent from this angle, but the radome leaves a lot to be desired as well. The kit's cabin is also taken directly from the EA-3B kit, so it has four seats instead of two, but since nothing can be seen of it, that's a moot point.

However, Steel Beach has come to the rescue with an accessory kit for the later configuration (small canoe, etc.) reviewed by Haagen Klaus HERE

The Steel Beach ECM pods appear to have the ALQ-99"s outwardly bulged lower sides rather than the flat-sided ALQ-76 pods that were carried by the ERA-3B according to Rick Morgan. Another stores option is the ALQ-167 "Bullwinkle" pod, an example of which is in the Revell F-14D kit. 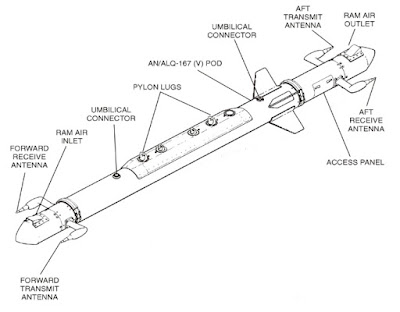 The Trumpeter engine nacelles are inaccurate but might be acceptable to most given all of the other inaccuracies. However, an excellent replacement set is available from HYPERSONIC

The Trumpeter canopy is equally off-putting. Hypersonic has a replacement in work but availability is TBD.

More later after comments are provided by my subject-matter experts...
Posted by Tailspin at 1:10 PM 7 comments:

I've updated my post on the 150 and 300-gallon tanks in use before the introduction of the Douglas high-speed tanks thanks to research by David Collier. See https://tailspintopics.blogspot.com/2016/09/things-under-wings-post-war-external.html
Posted by Tailspin at 11:11 AM 3 comments: