Vortex generators are small tabs mounted at an angle on the surface of the airplane skin. Their purpose is to introduce energy into the boundary layer, the slow-moving air immediately adjacent to an airplane wing or fuselage. They are added when required to solve problems found in flight test like buffet, wing drop, aileron effectiveness, etc. Their use is undesirable because they have to be mounted at an angle to the free-stream air, which adds drag. However, sometimes there is no other way to solve the problem.

The A4D is an example of their use to solve aerodynamic problems. An extensive trial and error program resulted in an interim pattern of vortex generators used on the A4D-1 and a different one on the A4D-2 and subsequent Skyhawks. Here is an example of a pattern that was evaluated and not adopted: 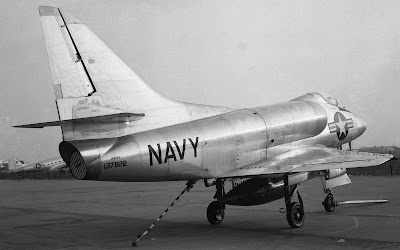 Note that there are vortex generators on the fuselage and upper surface of the wing adjacent to the fuselage as well as on the wing just aft of the leading edge slat.

The actual pattern used on production A4D-1s were on the leading edge slat itself along with six on the fuselage, in this case ahead of the mid-fuselage break. (There are also two on the wingtip itself.) 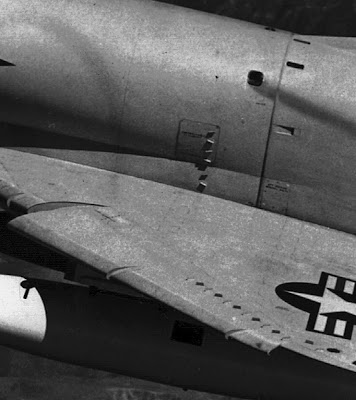 The ones on the slats were an alternating pattern of long and short and angled left and right.

Note that the barricade engagement fences have not yet been added to the slat as they would be on production A4D-1s.

The vortex generators on the fuselage were not always in a line vertically. 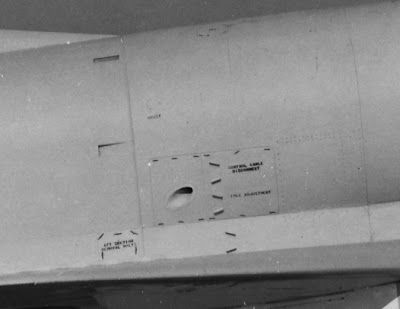 Sometimes the lower two were missing. 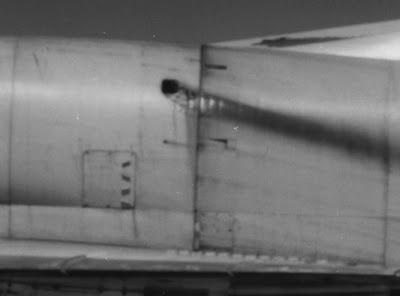 During production of the A4D-1, a different arrangement of vortex generators was developed for all subsequent Skyhawks. The ones on the fuselage were deleted, a different pattern (same number) was used on the leading edge slats and the wingtip, and a second row was added on the wing ahead of the ailerons. (Note the fences for barricade engagement on the leading edge slat.) 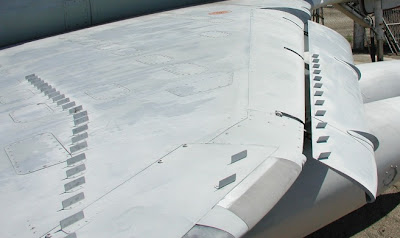 There are no kits of the A4D-1 as good as those of the A4D-2 (A-4B). However, the vortex generators are not the only difference between the -1 and A4D-2 (A-4B). A conversion from an A-4B also requires the removal of the inflight refueling probe and a "solid", i.e. non-ribbed rudder. The A4D-1 carried 150-gallon tanks early on as shown in the following picture. Note that every other vortex generator on the slat (which has been locked up) is edge-on to the camera, making them appear to be missing...

For completeness, here is an early A4D-1 cockpit: 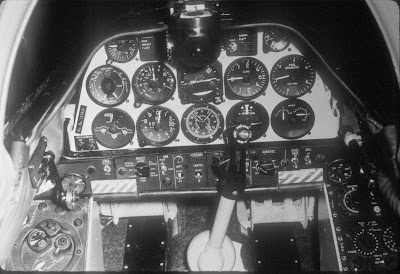 And an early A4D-1 ejection seat: 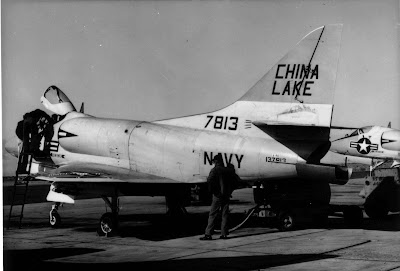 (The trough under the tailpipe is an experimental modification for IR suppression.)
Posted by Tailspin at 7:20 PM 5 comments: