All You Ever Wanted to Know About the F7U-1 Cutlass

Almost all of it is in my monograph, published by Steve Ginter late last year: 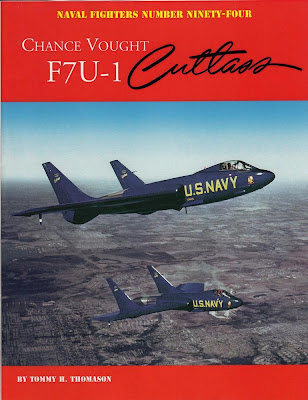 I say "almost all"  because as usual, somebody finds something new to me after I reluctantly declare victory and turn in the manuscript and illustrations. In this case, it was Rick Koehnen. See: http://thanlont.blogspot.com/2013/01/it-never-fails.html

For reviews, but not to buy it, see Amazon: http://www.amazon.com/dp/0984611479. For some reason, Amason is not offering it at present. However, it is available from Sprue Brothers (http://store.spruebrothers.com/product_p/gin094.htm), Specialty Press (http://www.specialtypress.com/vstore/showdetl.cfm?Product_ID=2537&DID=8), and the publisher, Steve Ginter. (For this monograph and many more, see his web page: http://www.ginterbooks.com/)
Posted by Tailspin at 5:43 AM 2 comments: 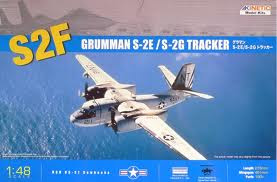 First, the Kinetic S-2E/S-2G appears to be a very nice, high-quality kit although I've not fondled its plastic myself. I only build 1/72 kits. However, I've been following the various builds and looked closely at the kit pictures on the interweb. Unfortunately, Kinetic mushed S2F-1 and S2F-3 (S-2E) details together in this kit and also made some configuration assumptions that were incorrect.

My overview of the Grumman S2F/S-2 variants:  http://tailspintopics.blogspot.com/2010/08/stoof.html  Illustration of and comment on most of the errors and notes listed below are provided in this post.

2. The bomb bay extends too far forward and the aft fuselage is too long. See http://belcherbitsblog.blogspot.com/2011/03/kinetic-tracker-fuselage-modifications.html

3. A couple of the features on the engine nacelle were not handed: the CSD air cooler inlet (lower side of the cowling) and the fuel dump pipe were located on the right side of both the right and left engine nacelles.

5. The cockpit is based on the S2F-1 so the control wheel and seat are incorrect.

6. The opening to the cockpit should have a rounded top rather than a square one. See http://tailhooktopics.blogspot.com/2012/12/s2f-overhead-hatch.html

7.  The engine nacelles do not have the notable concave reduction in width aft of the firewall but few have noticed and my guess is that even fewer will attempt to correct it. The cowling is also circular when in fact it was somewhat flattened at the top.

1. The retro-firing smoke marker was deleted from the S-2E; it was reinstated on the S-2G. it is represented by the tube extending aft on the lower right side of the fuselage between the crew door and the dust-bin radome.

2. The S-2G did not have the swept-forward barrier-cable pickup on the belly as it had eventually been deleted from the S-2E. It wasn't necessary on angled decks. A folding relay antenna was added there at some point, for sure on the S-2G and to some S-2Es.

2. The S2F had slots on the wing and not slats. See http://tailspintopics.blogspot.com/2011/04/kinetic-s2f-kit-redux.html

Posted by Tailspin at 2:28 PM No comments: