For some reason, North American was allowed to deliver FJ-2 and -3 Furies with a decidedly nonstandard green cockpit color. This is a picture of the cockpit of an FJ-2 in a museum that appears to be authentic. 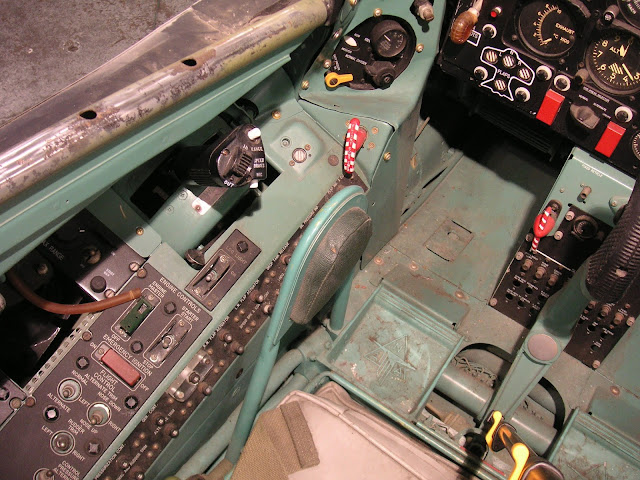 I haven't come across a specific specification for the color but in response to a question, have done some more research into how long North American continued to deliver FJ-2/3s with this cockpit color. Some have speculated that the changeover to a Dark Gull Gray interior occurred when FJ-3s began to be delivered in the gray/white scheme (note that the requirement for a DGG cockpit predated the one for a Light Gull Gray/White exterior by almost a year. However, color photos of FJ-3Ms clearly show that at least before overhaul and for the ejection seat headrest, the green persisted although I don't know for long in production.

Note that the FJ-3M to the left of the one pictured immediately above, same squadron, appears to have a Gull Gray ejection seat headrest.

This could mean that it had been through overhaul or that the seat had been replaced with a spare that was gray.
However, there's no question that FJ-3s at least eventually had DGG headrests although the cushion stayed green on at least some examples.

The other anomaly recently called to my attention was "black" landing gear on some FJ-3s. The usual color was "aluminum" paint with the interior of all the landing gear doors painted red, not just the edges, although there are white examples much later on.

In the following example, it appears that the coating was extended to the inside of the gear doors and the wheel wells but this may not have always been the case.

I first made note of it in a screen shot of an F9F-5 Panther in the movie Bridges at Toko-ri.

It was a tar-like application similar to automobile undercoating. When "unpainted" F7U-3 Cutlasses experienced unacceptable corrosion susceptibility and were repainted in the grey/white scheme, the protection was extended in some squadrons to spraying a coat of parel-keytone on the landing gear struts, wheels, inside of the landing gear doors, and wheel wells.

It proved to be a terrible idea. It not only hid the development of existing corrosion on the landing gear structure, it precluded the readability of identification on wire and tubes in the wheel well.
Posted by Tailspin at 9:19 AM