24 November 2018: A correction set for the more egregious errors is being prepared by Rieth Creations. See https://www.riethcreations.com/f2h-2-banshee-correstion

6 January 2017: Another build is in work, beginning with a fix to the upper nacelle shape. See http://tailspintopics.blogspot.com/2017/01/kitty-hawk-f2h-engine-nacelle-correction.html

3 November 2016: I just noticed in the ongoing Aeroscale build (see link below) that Kitty Hawk misinterpreted a photo of the ammo bay and added a "block" on the gun-bay aft bulkhead that shouldn't be there: 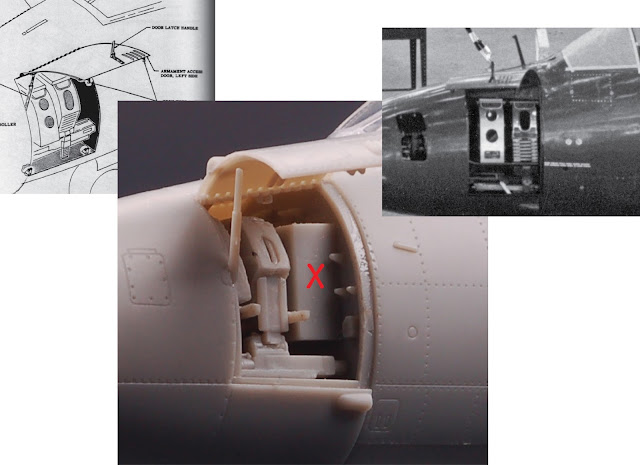 17 October 2016: I'm periodically adding information and links to build articles as I come across them. These will be identified from now on by being in bold.

Kitty Hawk sent me a kit for review but all I've been able to do so far is compare the big pieces to McAir drawings and dry fit the inboard wing and the fuselage. There's a good summary of what the kit includes here: http://www.cybermodeler.com/hobby/kits/kh/kit_kh_80131.shtml

For a very detailed and helpful build article, see http://modelingmadness.com/scott/korean/us/usn/f2h.htm. (One nit is that the positionable surface on the outboard wing panel is a flap, not an additional speed brake.)

Another illustrated and complete build at Aeroscale: http://aeroscale.kitmaker.net/modules.php?op=modload&name=SquawkBox&file=index&req=viewtopic&topic_id=252094 It is pretty much out of the box with one difference being the correct attachment of the outboard flap.

My first impression was very, very favorable (others building the kit think otherwise, e.g. "The kit is over-engineered and over-complicated with too many gimmicky parts that fit poorly together"). There are many detail features like a complete gun bay for the F2H-2 and a camera bay for the F2H-2P, the seldom-seen speed brakes, and options for extended flaps and folded wings. Assembly and fit are facilitated by the presence of small tabs and posts and corresponding slots/ledges and holes. For example, if you choose to close the gun bay doors, which have a neat representation of the piano hinge at the top edge, there is a lip on the other three sides that sits on a ledge in the opening of the nose to minimize fit problems. 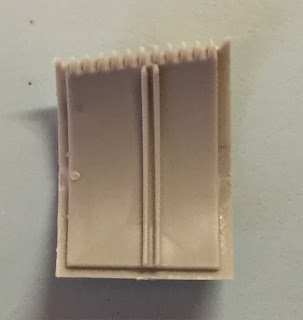 I held back initially on some of my observations about the assembled kit that I saw at the IPMS Nationals this summer and photographs of sprues when they fell into one of three categories: 1) the problem would be fixed before production, 2) distortion due to lens effects, and 3) the builder was working without instructions or familiarity with the subject and therefore had to guess where some parts went. (In the latter category, for example, the assembled F2H-2 had the right-hand ammo cans on the left side of the nose).

Some of the problems noted on modeling websites early on were exaggerated by camera effects. Yes, the model is a little sway backed but not as bad as photos would have it and it can be reduced by some shimming between the aft side of the inboard wing assembly and the lower side of the fuselage. The overall fuselage height and length are to scale: the model is not tubby. The canopy ledge is not too steep; it is as close to the right angle as I can measure. The engine inlet looks a lot better than it does in the picture although it is a bit too deep.

There are some things that could be fixed or not. Few will notice that the nose landing gear yoke is too long or the vertical tail is a little oversized in height and chord. However, there is that excessive upward bulge in the engine nacelle. It is by no means eggplane-like in appearance, but if you think of the Banshee as being sleek as I do, it is distracting. I haven't been able to come up with a reasonably easy fix to minimize it.

Some have speculated as to the usability of the ancient Hawk F2H  center wing section that appears to have a more accurate upper contour. For one discussion and comparison photos, see this thread on Hyperscale: http://www.network54.com/Forum/149674/message/1476637062/1-48+scale+Kittyhawk+vs.+Hawk+inner+upper+wings-

Another comment elsewhere cited the box art as an accurate depiction of the nacelle: 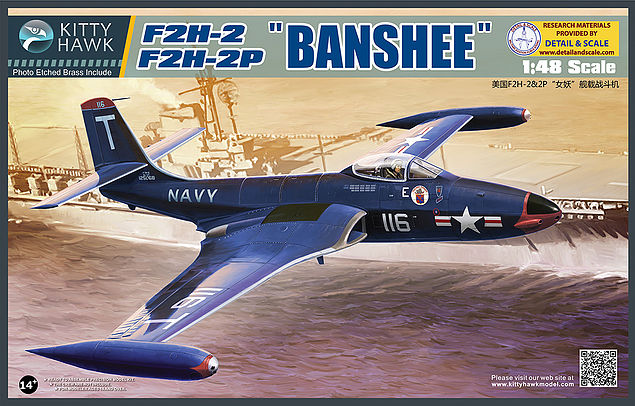 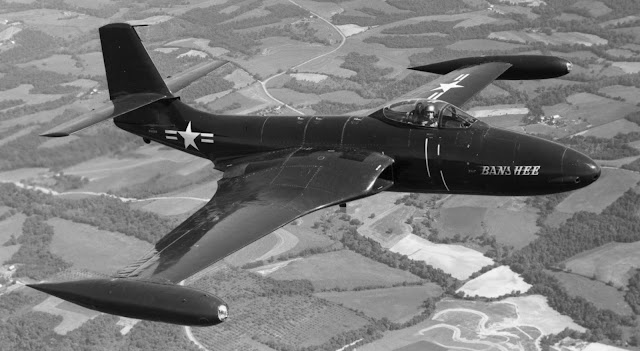 As a result, it depicts the prototype's short forward fuselage, short canopy sliding section, the windscreen with the straight-sided center panel, and the prototype tip tanks. However, the engine nacelle is the same as the production F2H-1 and -2.

The kit does not include the fighter's gunsight, only the -2P view port. The gun sight was a Mk 8 Mod 0 that set in a trough in the glare shield similar to the photo view port's. 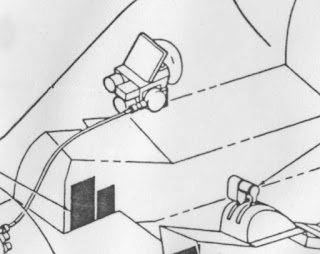 This is one of several pictures of this gunsight on the web site, http://www.aircraft-gunsights.com/usn-collection/ 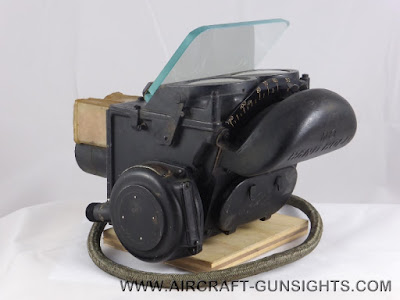 Another omission is some of the detail stuff behind the headrest. 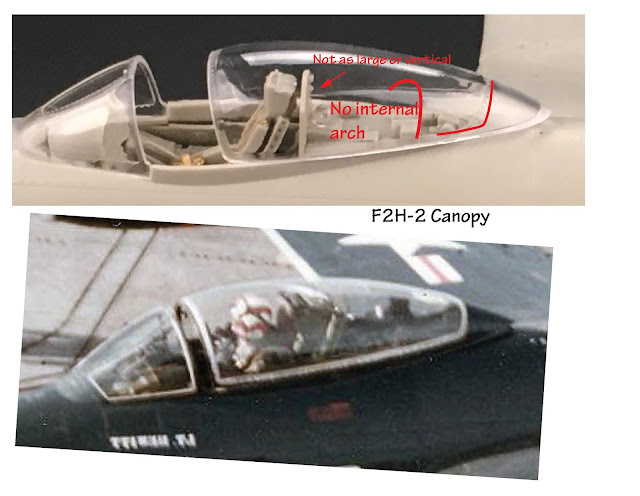 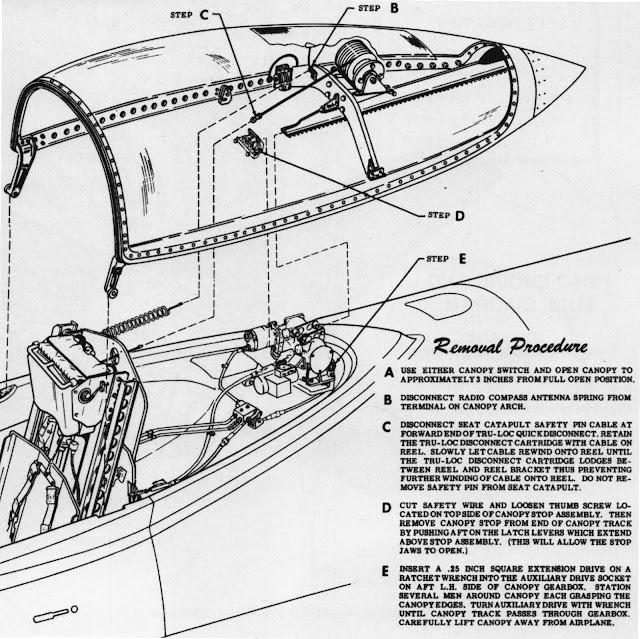 I'm not sure about the size and angle of the armor plate behind the ejection seat. It's present in the illustration above but doesn't seem very prominent in pictures, if there at all.

Note the fixed links on each side of the forward lower edge of the canopy. They have rollers on the bottom that slid back in a trough that angled upward as it went aft so the canopy bow rose to clear the pilot's head.

The wing flaps need some work to be accurate. The two inboard flaps should not have mostly parallel leading and trailing edges; the trailing edge tapers forward toward the fuselage center line so that the flaps are parallel to the ground when extended. The assembly instructions for the outboard flap are incorrect. The narrow chord section (A15 and 16) should be glued to the upper wing half. The wider chord section (A14 and A18) is the flap; its trailing edge includes a small portion of the upper wing surface. 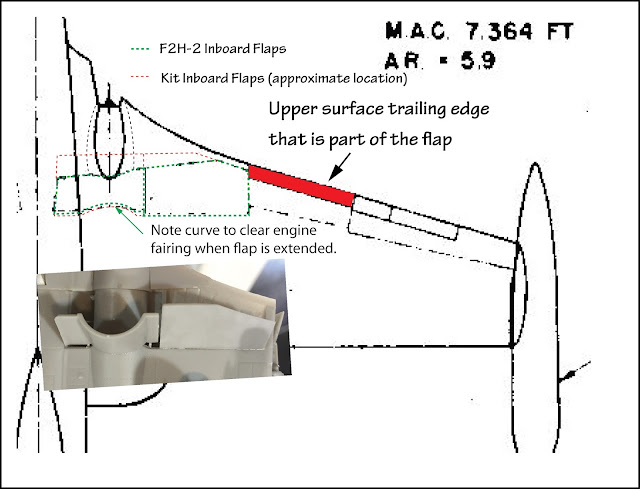 Although the two inboard flaps (shown in the color inset above) are separate structures, they are actually bolted together to form one surface and are roughly parallel to the ground when extended.

Another view of the wing upper surface included on the outboard flap trailing edge. Note the corresponding "cutout" in the upper wing trailing edge. 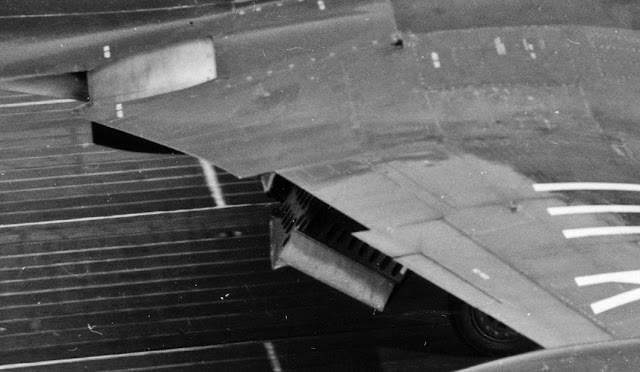 The top of the engine "nacelles" are incorrectly bulged upward and the intakes, not raked enough when viewed from the side.

Note also the position of the nose wheel relative to the wheel well on the assembled kit.

The kit has the two most inboard pylons staggered longitudinally. It would appear that they were in fact not staggered. They may also be slightly too close together. Unfortunately, I don't have station data for them. 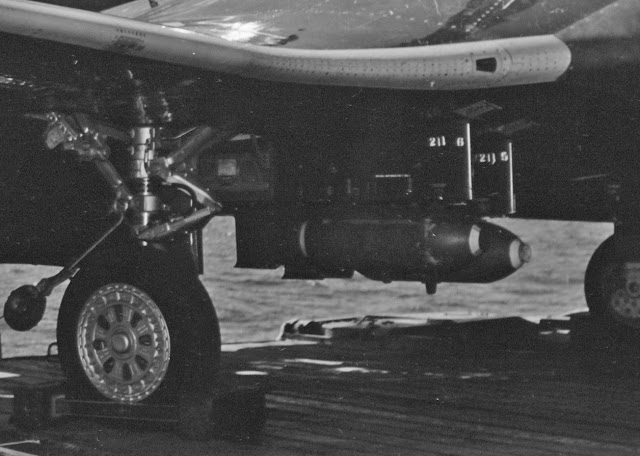 Note that the tip tank is not mounted square to the wing tip but is notably angled downward. (The kit parts provide a lot of latitude with respect to the mounting angle.) 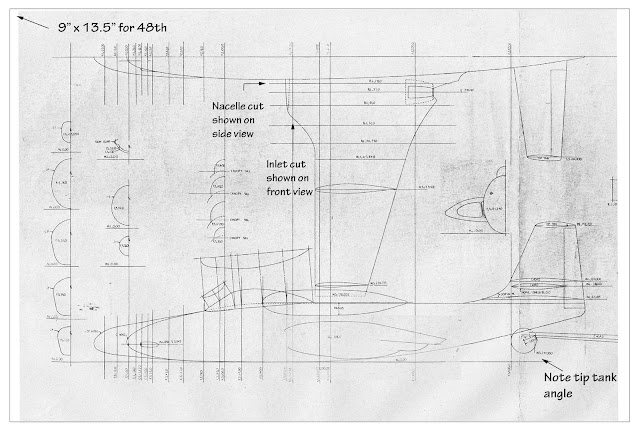 Compared to this McDonnell lines drawing, the leading edge of the vertical fin is almost 1/8" too far forward and it is about 1/8" too tall. The horizontal stabilizer is positioned about 1/16" too high. The most notable problem to my eye though is that the tip of the horizontal stabilizer is not raked slightly outboard as it should be and the aerodynamic balance (the tip of the elevator that extends forward to the leading edge) is not clearly demarcated relative to the panel lines. 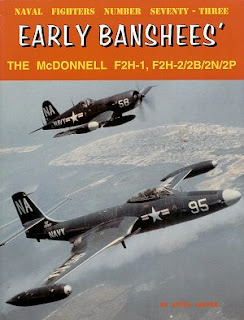 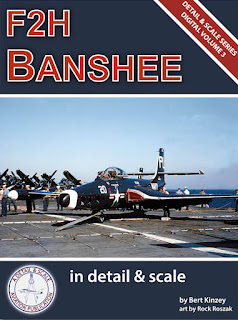