Early on, AD-5s were seen with external tanks that were clearly not the so-called high-speed ones developed by Douglas in conjunction with the Mk 8X bomb shapes*. This is an example.

I had been able to find any data of these tanks other than examples, no two of which agreed in dimensions, of 150-gallon tank drawings on Standard Aircraft Characteristics for some airplanes (it appears to have been derived from the bespoke 150-gallon tank carried by the F6F - see http://tailhooktopics.blogspot.com/2019/09/grumman-f6f-hellcat-belly-tank.html).  I was also initially confused by conflicting results from scaling photographs until I realized that there were probably two different but similarly shaped variants, a 150-gallon tank and one with a 300-gallon capacity.  The initial post was therefore provisional with a request for information, particularly dimensions. David Collier responded with his measurements of both as well as picture. The result: 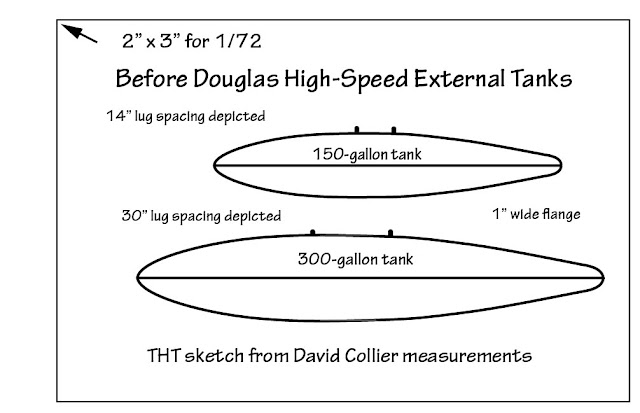 The different lug spacing results from the limits of the bomb racks being used, with the 14-inch only appropriate for 1,000 lbs, which was about the weight of a fully fueled 150-gallon tank.

The mounting bracket setup was not what I was expecting.

My guess is that the brackets on this tank (which appears to have a plate added on the upper surface) allowed the lugs spaced as required to locate the airplane's cg properly (note that it was from an F8F Bearcat, which weighed less than 10,000 lbs; with fuel, the tank added about 1,000 lbs). The 14-inch spacing is shown. The third one in line with the first two allowed for a 30-inch lug spacing.** The aluminum-colored tube aft of it is for the connection to the airplane's fuel system.

However, on close inspection of this installed AD tank, those brackets are also apparent and the after most one appears to have a purpose also.

**The 30-inch lug spacing was necessary for at least the F7F belly attachment. 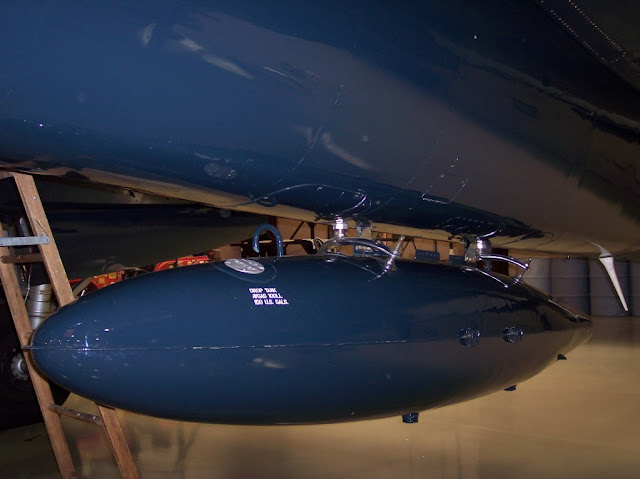 Note that there was a 160-gallon tank used in World War II that had a more bulbous front end than the one above. Not a good picture, but it suggests the relationship between this tank and the pylon on an early AD Skyraider. 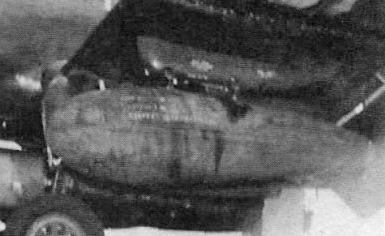