27 July 2012: I added a few more example pictures of the different sizes of standard Douglas-design tanks and an evaluation of the accuracy of the tanks in some 1/72-scale kits here: http://tailspintopics.blogspot.com/2012/07/douglas-low-drag-external-fuel-tanks.html

7 August 2011 Update: Gerry Whiteside provided some first-hand information on the fin attachment arrangement, which I have incorporated.

3 August 2011 Update: I made some changes to the 150-gallon tank based on a drawing provided to me by Craig Kaston. It corrects the number and location of frames and the 14-inch lugs, as well as adding the 30-inch lugs. Note that on 2 August, I also added some Don Hinton pictures of the 300-gallon tank..

In the early 1950s, Douglas created a series of low-drag external fuel tanks and bombs. The latter became the  Mk 8X series. The tanks came in three standard sizes: 150, 300, and 400-gallons. The number and orientation of the fins varied depending on the airplane and pylon station. The 150-gallon tanks, after appearing initially on the A4D-1 and early F4Ds, appear to have had limited operational use although the Douglas AD Skyraider and Grumman F9F-8 Cougar were qualified to carry them and the AD-5W often carried one of them. The 400-gallon tank was primarily carried by later models of the A4D Skyhawk and was also the basis for the Douglas D-704 in-flight fueling store, which was often referred to by the Douglas design number, and carried by the AD tankers for maximum giveaway.

While the bombs became standard across the board, the 300-gallon fuel tanks were primarily utilized by Douglas aircraft: the AD Skyraider, A2D Skyshark, F3D Skyknight, F4D Skyray, and A4D Skyhawk. The other Navy aircraft that deployed in the 1950s like the F3H Demon, FJ-3/4 Furies, and F7U Cutlass carried custom low-drag tanks. Later fighters also had to be equipped with unique tanks to maximize the amount of fuel that they could carry: the F4H/F-4 wound up with two, a huge 600-gallon one on the center-line station and/or 370-gallon tanks on the outboard wing stations. However, the Douglas 300-gallon tank configuration did become standard on the Grumman A-6, Vought A-7, and Lockheed S-3.

The number and orientation of the fins could be easily changed to the configuration required for a particular airplane's requirements. I had guessed that the aft end of the tank would have to be rotated to mount fins at 45 degrees. Gerry Whiteside provided the following:

Every once in a while, somebody asks about these or compares/contrasts the tanks available from different kit manufacturers. I don't have much but here is a comparison of the 150 and 300-gallon tanks. I drew the 150-gallon tank from a Douglas engineering reference drawing for the A4D; the 300-gallon one was done by a Vought predesign engineer once upon a time. The shapes can be considered to be close to the actual tanks. I was particularly surprised and pleased to see that the fin on the Douglas drawing was exactly the same as the one on the Vought drawing. 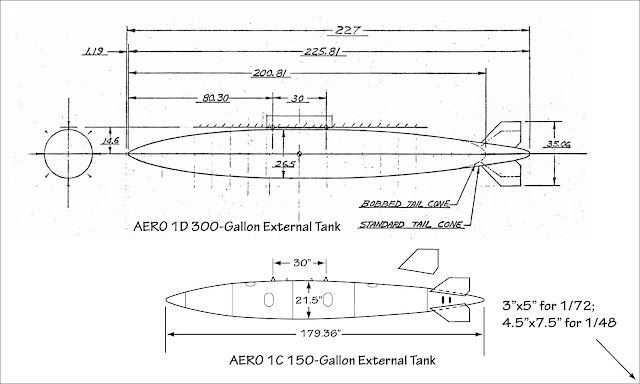 I did have Navy documentation for the 300 and 400-gallon tanks: 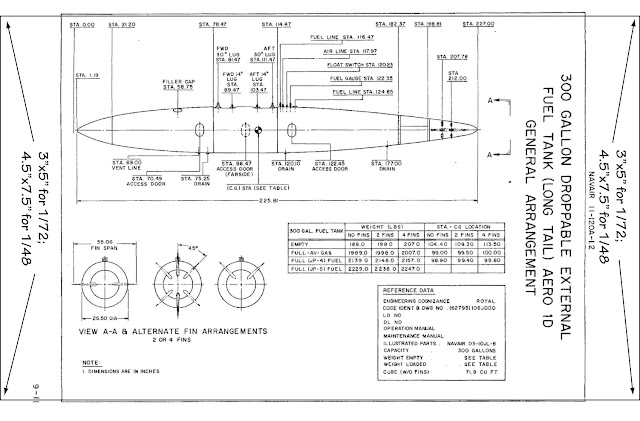 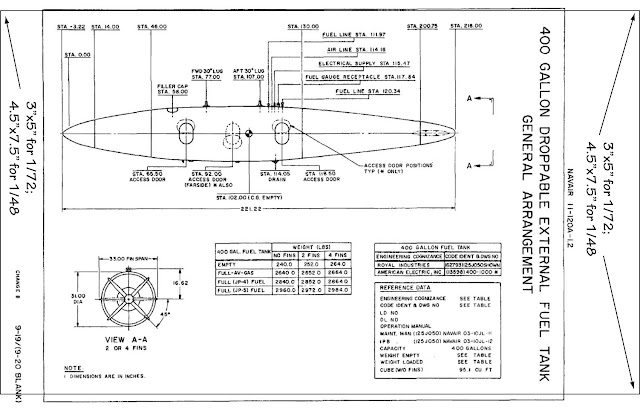 Unfortunately, the fin isn't shown for the 400-gallon tank but the span shown suggests that it used the same fin as the other two tanks.

30 July 2016 Update: I'm not convinced that the shape of the 400-gallon tank shown in the drawing above is exactly representative of the fielded tank. For sure, both the A4D and the A3J appear to have carried a tank with a less pointed nose, probably ending at the station 0 shown on the drawing.

The A4D tank (the aft end was also bobbed to allow access to the hell hole in the aft fuselage):

The A3J 400-gallon tank appears to taper more going aft than the standard tank drawing. The following is based on a pretty good North American general arrangement drawing.

Note that the nose of the tank in the drawing doesn't appear to bulge as much as the one in the picture above or taper as much. Here is another perspective: 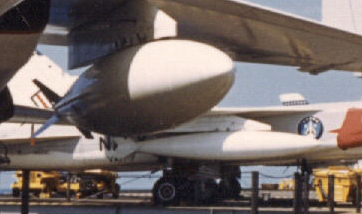 However, the 400-gallon tank was rarely seen on the RA-5C since it had more internal fuel than the A3J-1.

2 August 2011 Update: Don Hinton photos of the 300-gallon tank on the F4D at the National Museum of Naval Aviation at Pensacola.

Note that because of parallax, etc. it wouldn't be wise to try to use this to establish the shape of the tank.

The tip of the tank is a little bulbous and definitely not pointed.

Note the 30-inch lugs, sway braces, and connections to the pylon.

Note the vertical and longitudinal slots on the aft end of the tank for installing different fin configurations as described by Gerry Whiteside above. 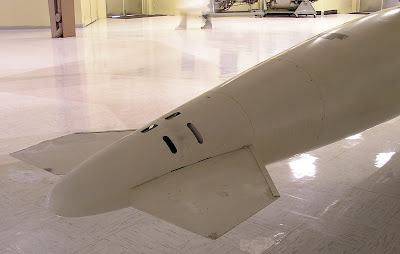 The silver rectangle on the top of the tank is a data plate. 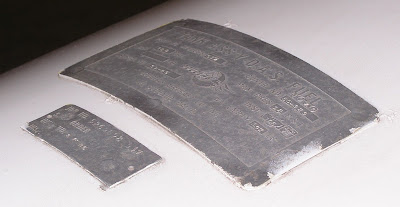 When a tank required the "X" orientation of the fins, as on the S-3 shown here (from a crop of a Christopher Ishmael picture found HERE), the aft end of the tank was rotated 45 degrees. 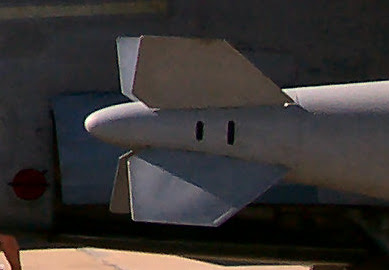 As a bonus, here is the Navy documentation for the D-704 store: 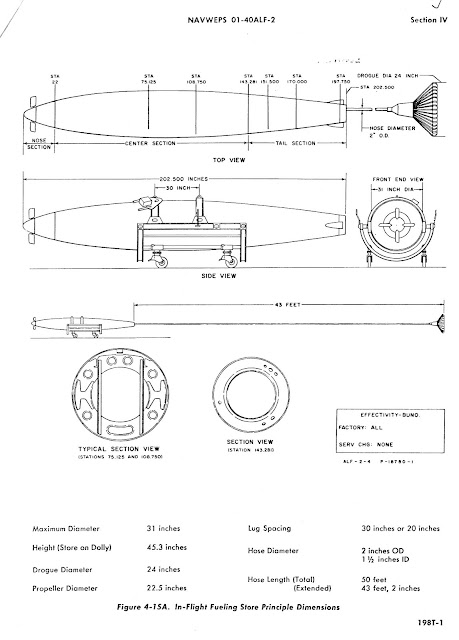 For more on the inflight refueling store, see http://tailspintopics.blogspot.com/2015/06/things-under-wings-inflight-refueling.html
Posted by Tailspin at 12:07 PM