In the process of creating a post on F4U Corsair antenna alternatives (see http://tailhooktopics.blogspot.com/2014/01/f4u-corsair-wire-antenna-alternatives.html and if you haven't looked at it very recently, it has changed), I decided that a more general post here might be of interest.

From the top, the high frequency (HF) radio antenna was a long wire (the lower the frequency, the longer the antenna needed to be for good transmission/reception). It was generally attached to a mast and the tip of the vertical fin or rudder to keep it away from the fuselage, with insulators at each end and a tensioner (either a spring or a rubber cylinder) at one end to keep the aerial taut. A lead-in wire was attached between the antenna and the fuselage, either at the far end, in the middle as shown here, or somewhere in between. Again, a ceramic insulator was provided at the fuselage entry point.

The HF antenna was also used to navigate by radio beacon or range and as a sense antenna for the direction finder. (The sense antenna was needed with early direction finders to resolve whether the needle on the instrument in the cockpit was pointing to or from the transmitter; otherwise, the pilot had to make one or two turns and fly the new heading for a minute or two to determine the way to the beacon.)

Going from left to right on the underside of the airplane, the ZB antenna was also used to determine which direction to fly to the carrier. An ordinary radio beacon could not be used since the carrier did not want to make a transmission that the enemy could home on. The YE-ZB system was implemented to provide an indication to the pilot as to which direction to fly to find the carrier, with the YE transmitter on the carrier sending out a coded signal to the ZB receiver (see http://aafradio.org/docs/YE-ZB.pdf).

The IFF (Identification Friend or Foe) antenna was originally a pair of wires, one on each side of the fuselage, that led to the outboard leading edge of the stabilizer. When turned on, the IFF responded to a transmitted radar pulse with a much stronger return than the reflection of the pulse would be from the airplane itself. This enhanced blip on a radar scope indicated that the airplane was friendly and not a potential threat. The first IFF was British, installed on Spitfires in late September 1940 and subsequently on Seafires as evidenced by this photo. 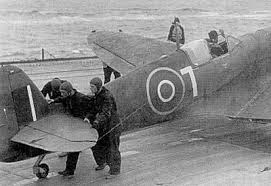 Note the rod antenna on the spine of the fuselage just above the entry point of the IFF antenna that will be discussed subsequently.

This "cheese-cutter" IFF antenna arrangement was subsequently replaced with a rod antenna, usually mounted on the belly of an airplane, as shown on the Avenger picture at the top of this post and here.

A radar altimeter was generally only provided on so-called all-weather aircraft. The antenna looked like an inverted "T". 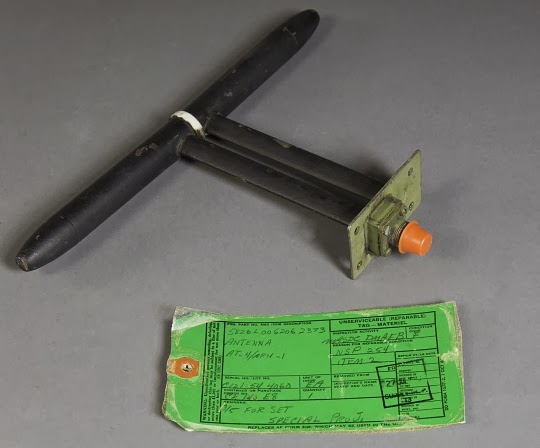 Two were required, located ten or so feet apart, in this case on the horizontal tail of an F2H-4 Banshee.

One antenna was used to transmit a pulse and the other to receive. The time between transmission and receipt was used to calculate the height of the airplane above the ground or sea.

The Yagi array was the antenna for the earliest airborne radar. This one has presumably just been removed or is being functionally tested prior to installation. 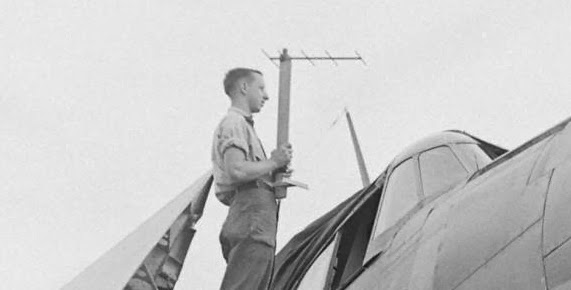 This antenna had to be manually turned to the bearing of interest. The radar return indicated the distance to large objects, like ships or a coastline, in the direction that it was being pointed. To provide 360-degree coverage, one was mounted under each wing. Because of the workload and skill involved in pointing the antenna and interpreting the resulting return, this early radar was only installed on airplanes with a radioman who was responsible for operating it.

Not shown in the Avenger picture above is a VHF (very high frequency) antenna like the one mounted aft of the canopy of a Corsair in a rigid mast. (The forward mast is not an antenna, per se, but just a means of positioning the origination of the HF wire antenna above the fuselage.)

Another variation of the VHF antenna was a simple rod or whip like the later IFF antenna shown above but perhaps twice as long. It may have been the antenna on the spine of the fuselage in the F6F Hellcat picture shown above with the IFF wire antenna. The rigid mast reportedly provided transmission/reception over a broader range of frequencies than the rod antenna but not as good at the specific range of frequencies that the rod antenna was designed for.

After February 1943, the equipment involved was designated in accordance with the Joint Army-Navy Nomenclature System, abbreviated as AN. An example is the Mk III IFF, which was AN/APX-1. The first of the three letters indicated that it was for an Aircraft. The second, the type of equipment, in this case A for radio. The third, the purpose of the equipment, in this case X for identification or recognition. A dash number following the three letters further refined the designation down to a specific piece of equipment, generally in order of qualification in that particular grouping. The first radar altimeter was the AN/ARN-1, with R for Radio (not P for Radar as you would expect) and N for Navigation aid. An ARC was a Radio for two-way Communication. An ARR was a Radio with Reception only, with the AN/ARR-1 being the receiver for the YE-ZB homing system.

For an excellent illustrated description of similar equipment as used on the post-war Royal Canadian Navy Avengers, see http://jproc.ca/rrp/rrp3/avenger_equipment_details.html.
Posted by Tailspin at 6:20 PM