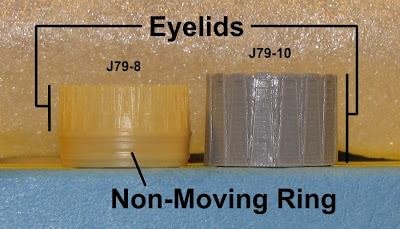 I'll refer to the "non-moving ring" as the "collar." However, it turns out that the ring/collar does move. Also, although his illustration leaves the impression that the -8 engine is notably shorter than the -10, the engines are about the same length.*

Since these two parts are for F-4 Phantom kits, the difference in length of the afterburners shown above is primarily the result of a small difference in the airframe structure if it's represented correctly on the kit: a short versus wide end to the fuselage structure at the opening for the afterburner nozzle. Note that the some of the difference relative to the "step" in the heat-resistant panels in the pictures below may be caused by the angle from which each picture was taken but according to a pretty-good McDonnell lines drawing, the aft end of the -10/17 nozzle does extend 1.28" aft of the -8/15 nozzle's. (The difference in the width of the sheet metal at the forward end of the nozzle is about 3".) 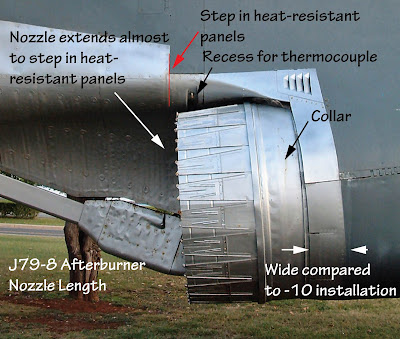 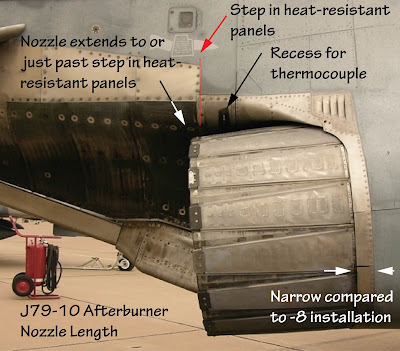 The location of the end of the nozzle relative to the airframe is very inconsistent on static display F-4s and RA-5Cs. This appears to be more common than I would have thought, and even occurs on the same aircraft. 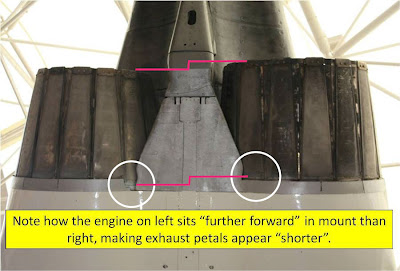 (Picture by John B.)

Some static display airplanes also have the nozzles closed down, which makes the -8/15 nozzle very different in appearance (and much shorter) and the -10/17, a bit shorter. However, the nozzle was only in this position when the engine was running and not in afterburner. 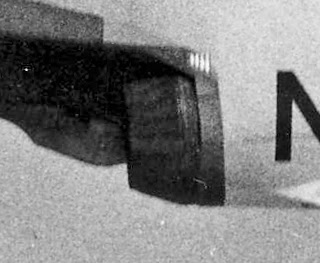 A closed-down -8/15 nozzle is rare (actually, very unlikely) on flightworthy F-4s and RA-5Cs when they are shutdown. 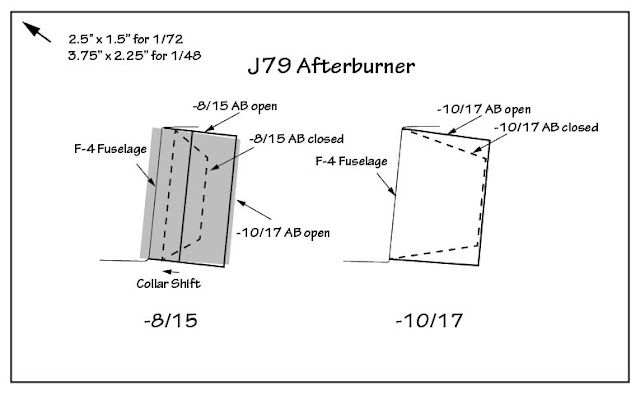 The gray rectangle on the -8/15 drawing is the location of the exposed portion of the -10/17 nozzle. The forward exposed end of the -10/17 nozzle is farther forward as shown in the photos above. Also note the movement of the collar when the -8/15 nozzle closes down for non-afterburning operation. The movement of the collar into and out of the fuselage opening results in some "polishing" of it. 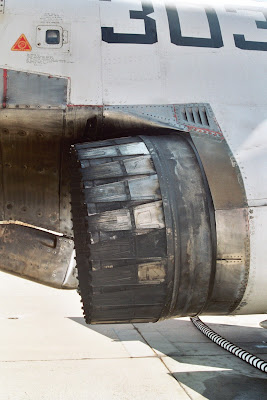 The interior of the two different nozzles is very different (the one on the left is in a museum aircraft and appears to be located much farther forward than it should be, not to mention a screen has been installed to keep birds and critters out): 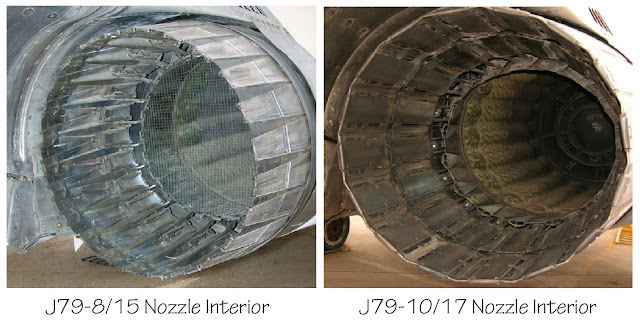 The -8/15 nozzle has longitudinal ribs on the inside of the petals whereas the -10/17 nozzle has a relatively smooth inner surface. The difference in ejectors is depicted in a Rockwell International maintenance publication:

The presence of the -8 versus the -10 in the RA-5C is much less obvious than shown above in most pictures because the collar is in the shadow of the horizontal stabilizer. As with the F-4, it appears to me that the end of both nozzles is very close to the same location relative to the airframe fairing above the nozzle. (Again, static display airplanes, particularly the RA-5C at the Pima Museum, can't be trusted in this regard.) According to Craig Kaston's research, the -10 was installed in RA-5C BuNos 156608-156643 and the same airframe change (AFC-328) was used to modify nine existing RA-5Cs of early vintage: 146702, 149276, 149287, 149298-9, 149301. 150824, 150831, and 151630. The incorporation of the change is apparent by the difference in the sides of the engine inlet and the extension of the wing inboard leading edge to the front of the inlet.

*A now defunct GE webpage listed the -8 and -10 as having exactly the same length. It may be that the -10 engine was installed slightly farther aft to help resolve a forward cg problem. One stated but perhaps apocryphal reason for the Navy F-4s not getting a nose-mounted gun like the Air Force F-4E is that it would have moved the empty cg too far forward in light of the Navy's requirement for relatively low-speed takeoffs and landings.

Thanks to Craig Kaston for his observation of the -8/15 collar position and photo and to Mark Nankivil for the pretty good McDonnell drawing that I used to depict the nozzle position.
Posted by Tailspin at 12:33 PM