In response to a request for a picture of the F7U-3 cockpit, I did some research and while I'm still not sure what it looked like, I did come across some interesting stuff. To me, at least.

First, cockpits of airplanes changed over time so a picture may not be representative of the airplane being modeled. What's worse, some cockpit photos are of airplanes in flight test with switches and instruments that have been added for purposes of the test. For example, this is the instrument panel of an early F7U, BuNo 128452, used for spin test. 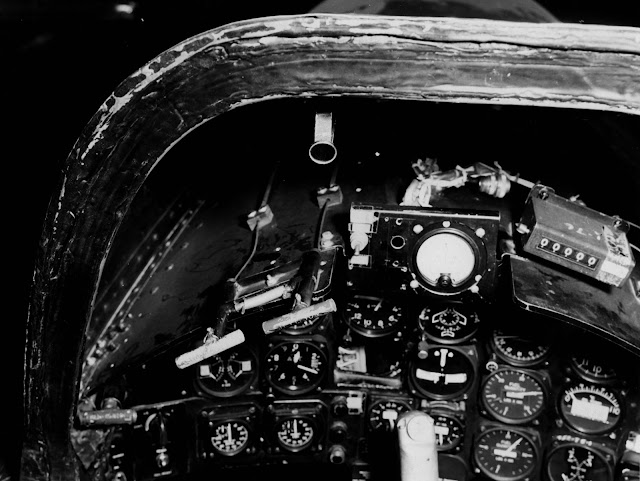 Clearly the stuff that's up on the glare shield is test equipment. The two prominent T handles on the left side are for spin chute deployment and jettison. The location of any instrument in this picture can't be relied on for an operational cockpit but you can note that the instrument panel was curved, meaning each instrument and switch was roughly equidistant from the pilot.

This is the instrument panel of early production F7U-3s, BuNos 128467-78. Note that the cover marked "glass" protects the lens that projects the gun aiming image on the windscreen. 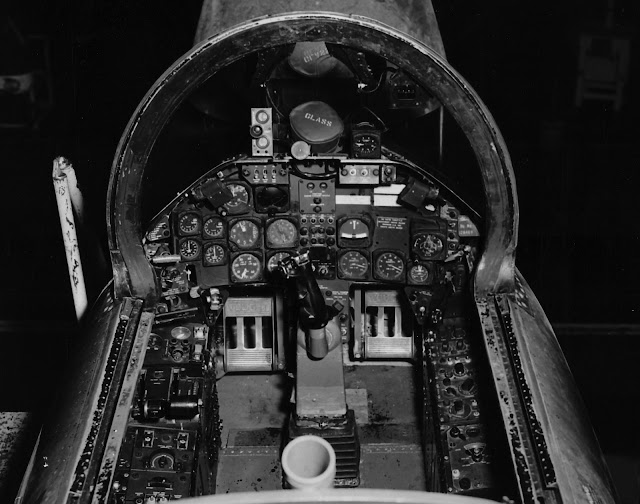 The "dark" instrument that looks like a radar screen is really the artificial horizon. F7Us, apparently including the -3M (more on that later), did not have visual-assist radars.

This is a photo taken by Don Hinton of the cockpit of F7U-3 BuNo 129554 at the Museum of Flight Restoration Center at Paine Field in Everett, Washington. The cockpit appears to be pretty stock. It appears that the artificial horizon and the directional gyro on the far right of the instrument do protrude out from the panel. 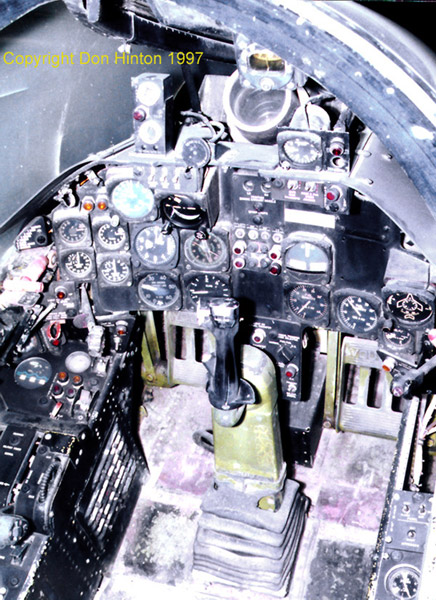 This is a picture of the same cockpit from a slightly different angle, now with a dummy sitting on the ejection seat. Unfortunately, I don't know who the photographer was. 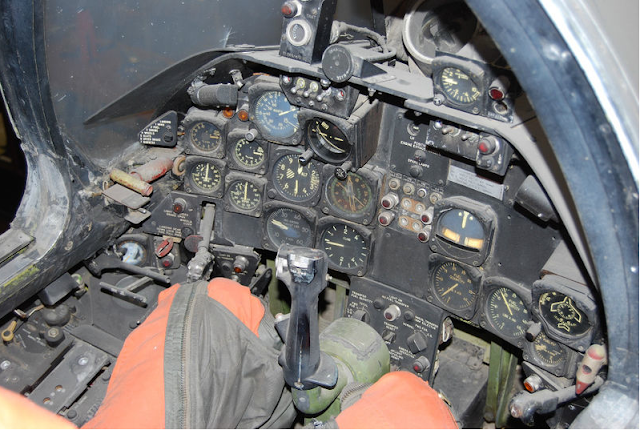 The next picture is really confusing. It is BuNo 129590, which was an F7U-3 as far as I know. It has the F7U-3 gunsight. However, it also has the "zero reader" (it looks like an ILS indicator) and a range indicator immediately above it that I associate with the F7U-3M cockpit. The big ammeter mounted to the bottom of the glare shield doesn't appear to belong in an operational cockpit. I think the thing blocking the gun sight projection lens is a camera to record the image. My guess is that this picture shouldn't be relied on as representative of an operational F7U-3. 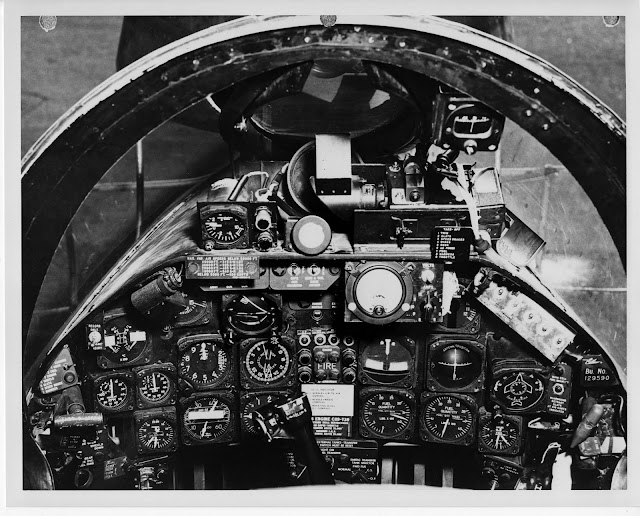 (From the National Museum of Naval Aviation) 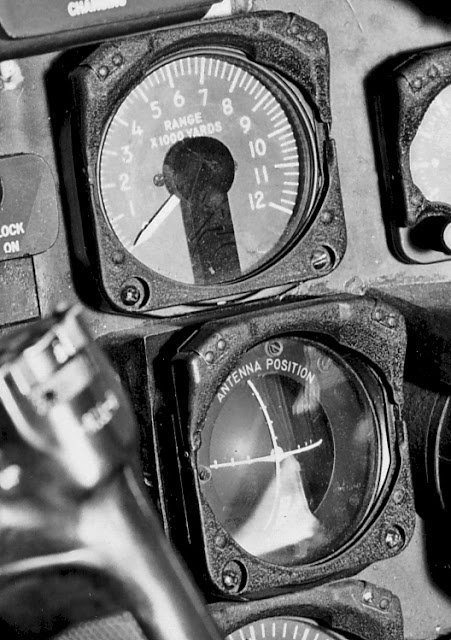 My current guess is that when the Armament Control System locked on something, the pilot could point the airplane at whatever it was using the zero reader (the instrument just to the right of the turn-and-bank indicator), and more precisely aim the radar beam using a different gun sight from the one provided in the F7U-3. Or the pilot used the gun sight to be sure the radar was locked on to something that needed to be shot down and/or aim it at something he wanted to shoot down. I don't know.

The BIS Service Acceptance Trials report noted that the armament system would lock on to the bullet stream when the guns were fired (as indicated by the illumination of the lock-on light and the rapidly increasing range) if it wasn't already locked on to something.

As background, the Sparrow I missile was a beam-rider. It had rearward-oriented antennas that detected where the airplane's radar beam was pointed and "rode the beam" toward the target, so to speak. The shortcoming was the beam got wider the farther it was from the antenna. That meant that it wasn't accurate enough at distances over a couple of miles to get the missile, which was gyrating from side to side and up and down to stay in the beam,  close enough to the target to detect it and detonate the warhead. Aiming at the target through the gunsight might have been necessary to improve the accuracy by refining the lock on. In any event, riding the beam by looking backwards at where it was pointed meant the Sparrow I was only likely to be effective in visual conditions at relatively short ranges.

The Sparrow III, on the other hand, homed in on the radar beam being reflected from the target, which meant that its guidance was getting more and more accurate the closer it got to the target. That made the missile pretty effective as long as the target didn't start maneuvering to evade it.

This is a picture taken in July 1955 of the instrument panel of "YF7U-3M", BuNo 129700, in test at Point Mugu. Note the ammeter on the top of the glare shield and the zero reader to the right of the stick grip with the radar range indicator above the zero reader (the picture of the range to target and zero reader instruments above was cropped from this one). And that there is no visual-assist radar scope. (The instrument behind the stick grip is almost certainly the turn-and-bank indicator.) 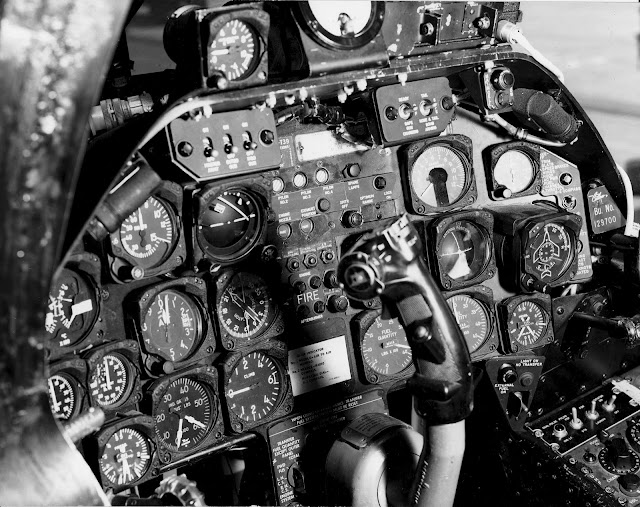 This is a picture of the bench test setup for the "APQ-51 gun sight" for the Point Mugu tests. 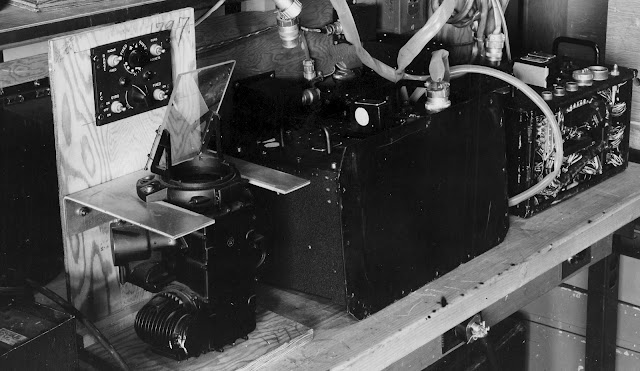 That's a little confusing because this is a picture taken by Don Hinton of the Cutlass in the National Naval Aviation Museum at Pensacola marked as F7U-3M BuNo 129655. (Why the cautious wording? Because it doesn't have the pylons on the outboard wing panels and 129655 is listed as an F7U-3.) Note that the gun sight is very different from the one pictured above and is also not correct for an F7U-3M as noted by Laurent in his comment on this post. Other instruments are missing or mislocated, e.g. the artificial horizon, so this clearly isn't a stock operational cockpit of an F7U-3, much less an F7U-3M. 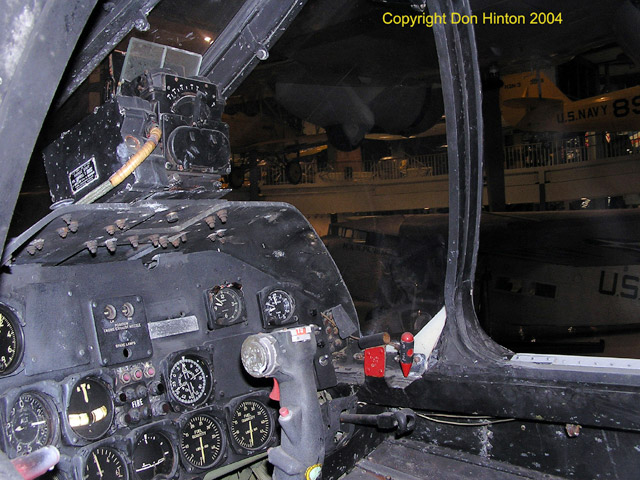 It is however, sensationally documented. See http://www.navalaviationmuseum.org/nnam/virtualtour/#MUSEUM/COCKPITS/F7U/F7U. I noted, however, the throttle for the right engine is for an F8U Crusader as indicated by the marking, "Cruise Droop" with an arrow, so modeler, beware.

One thing that I think we can rely on is that some F7U-3 cockpits were pretty much black except for the bottom of the control column and the rudder pedals: 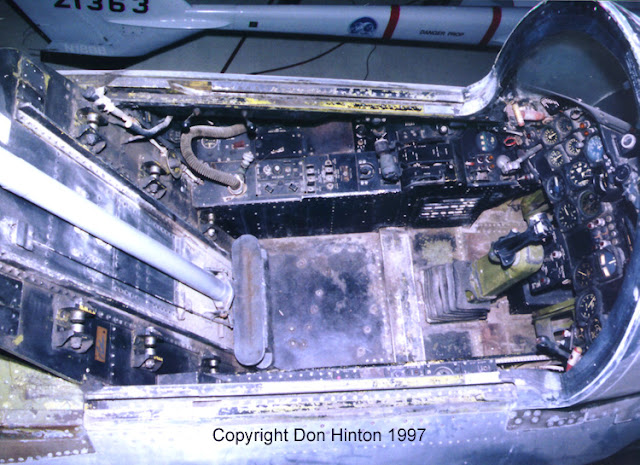 And the ejection seat: 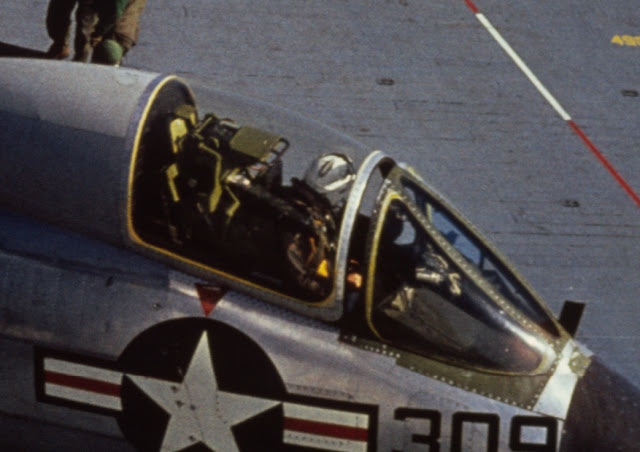