Are You Going to Believe Me or Your Lying Eyes? II

It is well known that the major external differences between the A4D-1 and A4D-2 Skyhawks were the inflight refueling probe and the externally ribbed rudder. Also the vortex generator arrangement but that was much more subtle.

(The little pods on the stores stations are intended to house four 2.75-inch folding-fin rockets; they were the original armament for the F4D Skyray. I don't know why they were being carried here. Increased weight, space for instrumentation?)

Here is the first production A4D-2 BuNo 142082 with the solid -1 rudder and rudder damper on the middle rudder hinge: 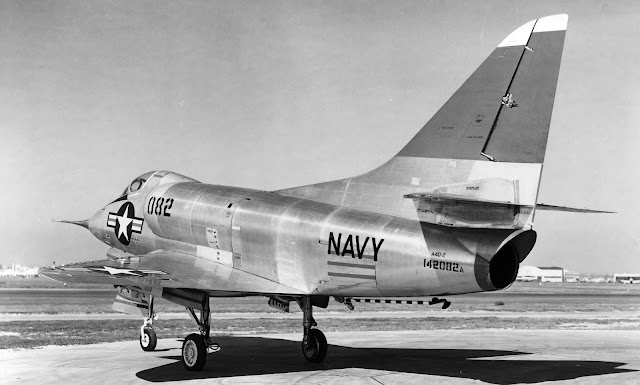 (It also has the -1 vortex generator arrangement on the fuselage and wing.)

Here is A4D-2 BuNo 142095 with the externally ribbed rudder but it doesn't have the inflight refueling probe: 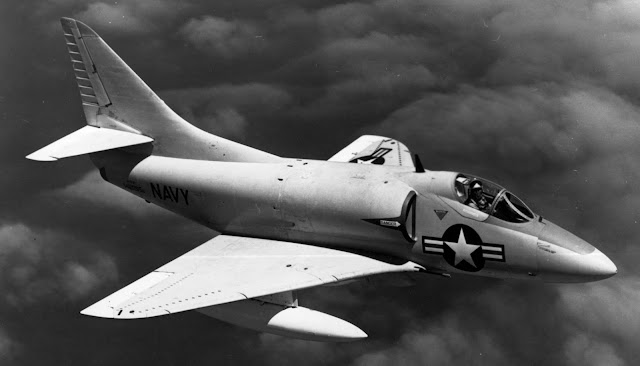 (Also note the slight mismatch of the nose cone and forward fuselage as indicated by the edge of the dark gull gray anti-glare panel and the then-standard 150-gallon tanks.)

These, of course, are extreme examples of flight test and very early production airplanes but they illustrate why model kit manufacturers might have trouble getting every configuration detail right.
Posted by Tailspin at 10:21 AM