I decided to double check my assertion that the vertical tail did not change between the S2F-1/2 (S-2A/B) and the S2F-3 (S-2D). With respect to the size of the vertical tail, there's no difference shown on the Grumman factory drawings between the S2F-1/2 and the -3 or any mention in Grumman documents of a change. The mean aerodynamic chord is identical and the tip of the tail is at the same fuselage station of 157 inches. There is a difference in height between the top of the tail and the ground, but it can be accounted for by the -3 forward fuselage stretch between the main landing gear and the nose gear, which would result in a more nose down sit since the length of the nose gear did not change. Here is an overlay of the respective SAC side views: 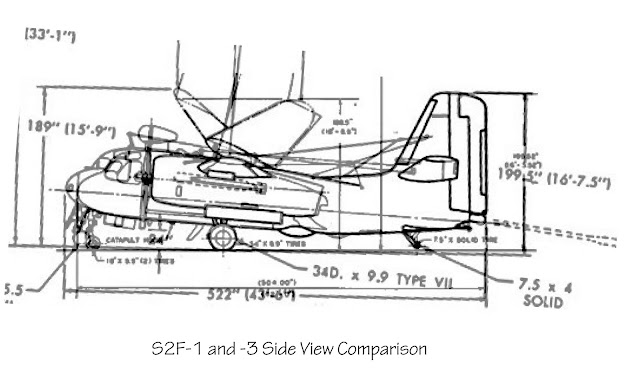 Note the difference in the "sit" in additional to the exact overlay of the vertical tails..


Since it's not unknown for draftsmen to be a bit lazy (note the inaccurate depiction of the aft end of the S2F-1 engine nacelle) and perhaps not to have bothered to update the S2F-3 SAC drawing for a change in the tail, I compared a couple of pictures taken from about the same distance and angle. 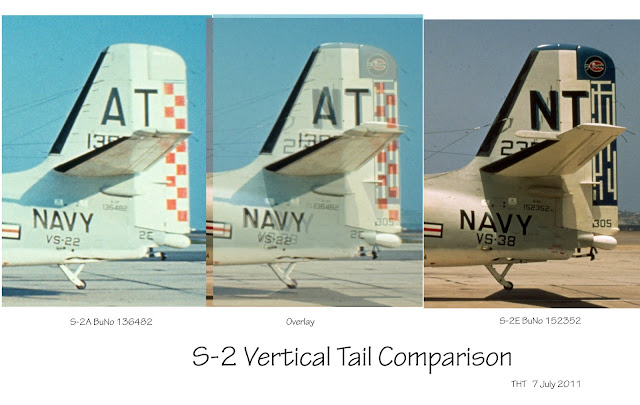 They look identical to me...
Posted by Tailspin at 8:25 PM