This is another in a series of examples of how hard it is for model kit manufacturers to produce one with no errors of shape or detail.

The Mk 4 atomic bomb was the improved production version of the Mk 3 Fat Man that was dropped on Nagasaki. According to Chuck Hansen's book, U.S. Nuclear Weapons: The Secret History, the first one was delivered to the the national stockpile on 19 March 1949. A total of 550 were built between March 1949 and May 1951. All were retired by May 1953, replaced in part by the very similar but lighter Mk 6.

Because of the security imposed on these weapons, documentation is scarce. The 12 Squared Mk 4 kit (see Here) was based on the following drawing, which turns out to be for a 1/2 size ballistic test specimen. What looks like a gun-type mechanism (the Mk 4 actually had a spherical implosion device, accounting for its very low aspect ratio) was actually a pipe on which was mounted two 700-lb lead weights. The afterbody was a straight taper with four simple fins mounted on the back. 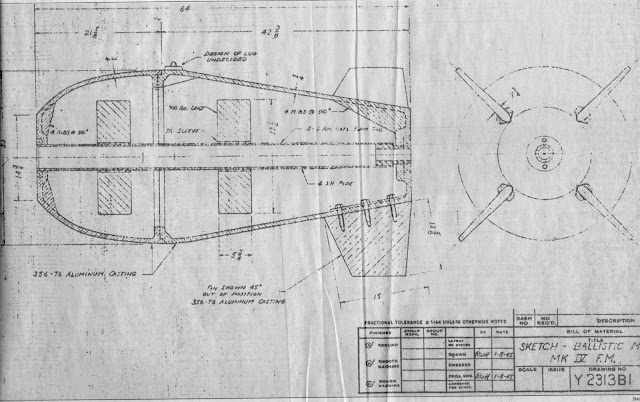 Bill Maloney (web page) photographed a full size Mk 4 model with this fin configuration that is in the Diefenbunker Cold War Museum about 20 miles west of Ottawa, Canada. It was built by Russ Gray in 2003 for a documentary film. Note that the afterbody is more bulbous than the drawing above. 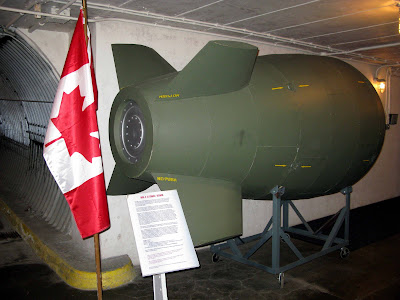 I don't know whether the original Mk 4 had fins like the one above. The more familiar configuration has wedge-like fins. 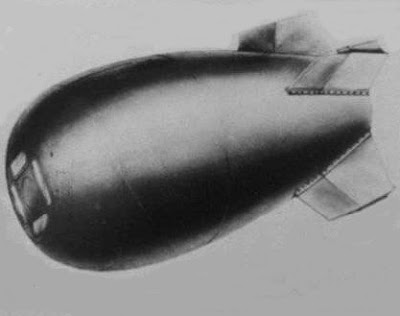 I don't know if there are any other Mk 4 shapes on display. However, there are a few Mk 6 shapes in museums, including the National Museum of the US Air Force at Dayton, Ohio and the Museum of Aviation at Warner Robins AFB, Georgia. The Mk 6 appears to be externally identical to the Mk 4 except for circumferential stiffeners around the mid-body resulting from a change to a lightweight casing that reduced the bomb's weight by 2,000 lbs.

I wasn't happy with the first drawing that I had made of the Mk 4 for an illustration of the AJ Savage in my book Strike from the Sea, so I revisited the available material to see if I could improve it. Once again, I proved to myself that working solely from pictures leads to error. Fortunately, Bruce Radebaugh responded to my request for someone to measure the Mk 6 at Warner Robins, so I'm fairly confident that the size of the fins on my Mk 4 drawing is now about right and the body shape is close: 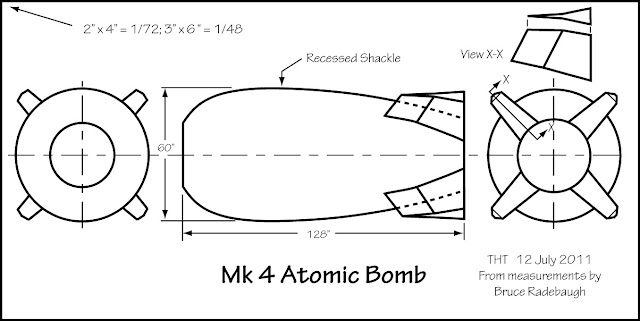 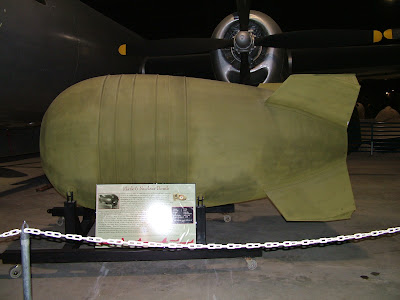 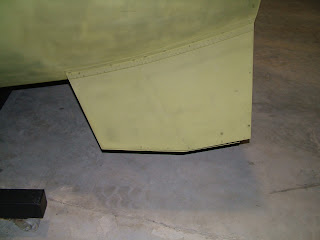 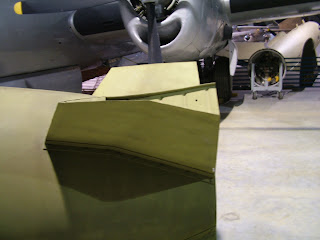 Although the fin looks flat on one side in the picture above, it's an optical illusion caused by the downward slant of the back half of the top of the fin. It is symmetrical. 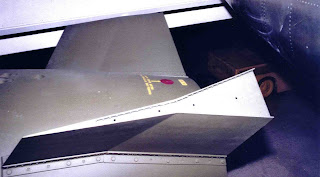 The Mk 6 shape in the Warner Robins museum appears to be a mockup. Compare, for example, its boat tail: 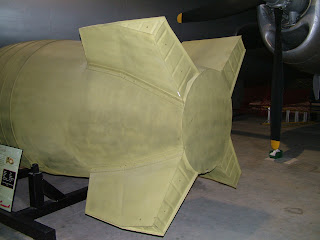 With the one on the Mk 6 in the Air Force museum: 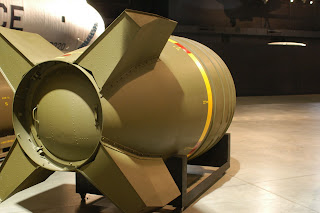 I can't say which is correct; the one in the Air Force museum is likely a training aid with details not representative of the real thing.

However, the Smithsonian Air and Space Museum reportedly was given a Mk 3 that was later determined to have not been fully disarmed, so anything's possible... 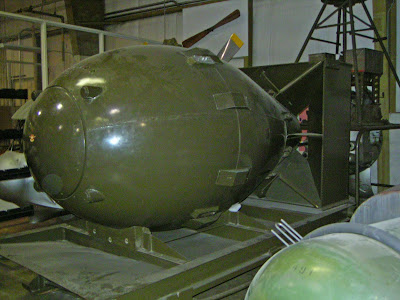