The aircraft of the Navy’s flight demonstration team, the Blue Angels, have been painted overall blue with yellow markings, blue and gold being traditional Navy colors, since their first air show in 1946. But what color blue, much less yellow/gold. As anybody who has spent much time on or by the ocean can attest, the color of the sea appears to be different shades of blue from time to time. This is also the case with Blue Angel blue…

Note: The FS in FS 595 stands for Federal Standard. It was developed in 1956 and replaced the previous AN (Army Navy) numbers for colors. Each FS 595 color is defined by five digits in FS 595. Although no color has an official name, many have a widely recognized nickname. Although FS 595 did not exist in 1946, for simplicity I have used it as a reference instead of the equivalent AN color.

1946 F6F-5: There is contradictory information about the color of the F6Fs. According to Robert K. Wilcox's book, First Blue, a biography of the first leader of the Blue Angels, Butch Voris: "For color, they went with traditional navy blue and gold. But to be a little different, Voris picked a slightly lighter shade of dark blue than was normally used on Navy planes in those days. The name of the paint was 'insignia blue'. That was just the name and had little to do with modern insignias since it was out-of-date and little used."

The implication is that there was a suitable light blue paint in stock. However, Insignia Blue, FSN 15044, was neither out-of-date nor little used at the time. It was also darker, not lighter, than Gloss Sea Blue, FSN 15042, which has a bit of green in it. Click Here and Here to see the difference.

Voris' statement that the color was "out-of-date and little used" may reflect the fact that at the time, the insignia blue circle/surround was no longer used on the national insignia of Navy aircraft painted overall Gloss Sea Blue. Since the insignia and sea blues were about the same, only the white star/bars and red bar were put on the airplanes. In most of the few pictures available, the Blue Angels Hellcat does not appear to be very much lighter, if any, than Gloss Sea Blue. However, it does appear to be a lighter shade of blue in this one, taken at their first air show for the public: 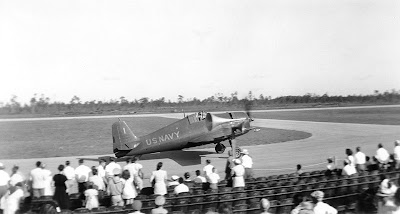 There is a possibility that Voris may have been referring to a mix of insignia white and insignia blue that resulted in a “standard” color. There is a Light Blue, FSN 15102, which harks back to the “true blue” that was used for Navy markings in the days of yellow wings. It meets the criteria of out-of-date and a little used but looks light, certainly lighter than the Blue Angels blue used subsequently. Another possibility is the blue used on the prewar red/white/blue rudder stripes, which looks lighter than the current insignia blue but darker than "true blue." Or Voris may have said lighter when he meant bluer…

There seem to have been two slightly different schemes used on the F6Fs during their very short stint with the Blue Angels. In some photos, the leader’s airplane has a distinctive "1", a light color propeller dome, and "US NAVY" on the fuselage with the "US" in 45 degree type; in other photos at a show, the "1" seems a little simpler, the "US" might be rounded and the propeller dome is darker. In conjunction with this, there may have been two sets of aircraft. There was at least one set of four F6Fs specially modified for the Blues at a Navy repair and overhaul depot, removing guns, armor, gun sights, ammo boxes, etc.

John Elliott, in Volume 2 of his Monogram series on Navy and Marine Corps color aircraft states the F6F was "painted in the standard camouflage color Semi-Gloss Sea Blue overall, apart from the forward portion of the spinner which was Orange Yellow. All national insignia was removed and, in its place, the letters for US NAVY, (without periods after the U and S) were applied along the fuselage and the underside of the port wing in Orange Yellow. Centered on the fin was the individual aircraft number which also painted in Orange Yellow...Finally, the whole aircraft was highly polished and waxed." Orange Yellow was ANA 506; the FS equivalent is 13538.

In this photo reportedly taken at Grumman of a Blue Angel passing overhead during their final show in the F6Fs, the bottom of the wing appears to be marked with US on one wing and NAVY on the other. (I’ve crudely enhanced the markings which are barely visible on the photo I have.) This is slightly different than Elliott's description with US Navy on “the underside of the port wing.” 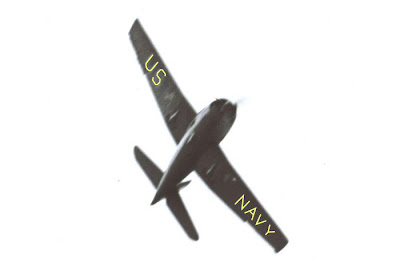 The Draw Decal (www.drawdecal.com) instructions for the Blue Angels F6F state “Paint the entire aircraft FS 15042 – Gloss Sea Blue and the lettering was real gold leaf.” I  would be inclined to paint it Insignia Blue.

1946-1949 F8F-1: These aircraft were configured without guns, gun sights or tail hooks. The first set did not have the turnover structure behind the pilot’s headrest.

The overall blue is now definitely a light blue, lighter in some pictures than others. It was probably a mix of Insignia White and Insignia Blue but the proportions are not known for sure and it's almost certainly not the shade on your monitor. My guess is that the "gold" was Orange Yellow, but I'm far from sure about that. 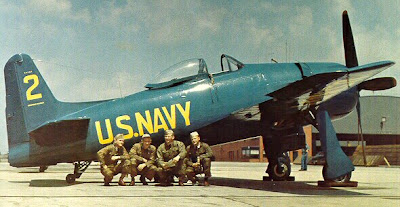 There were at least three slightly different marking schemes. The one above appears to be the original one with a slanted "S". The next one, evidenced by the addition of the turnover structure, had a square "S" and simpler numbers. This picture is dated 26April1947: 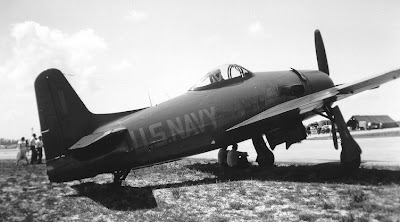 The final scheme added a silver, polished aluminum, or gold leading edge on the wing and tail surfaces; and “Blue Angels” in cursive writing on the cowling. 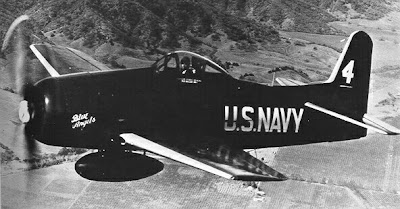 Early on in the Blue Angels career, in keeping with the claim that they were demonstrating typical fighter maneuvers, an opponent was included in the show and shot down. The first of these was an SNJ, probably painted Orange Yellow (although possibly Yellow as in "yellow peril"). It had a red "meatball" on the aft fuselage and a "0" on the tail (Zero, get it?). 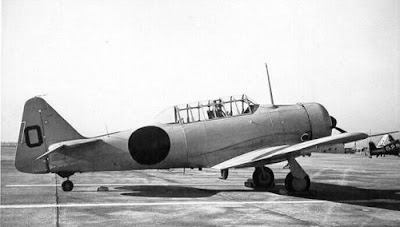 The SNJ was eventually replaced with an F8F Bearcat, again probably painted Orange Yellow with Blue Angel blue markings and "Beetle Bomb" on the cowling. Note the "silver" leading edges, which suggests that this is the treatment of the leading edges in the last F8F color scheme. 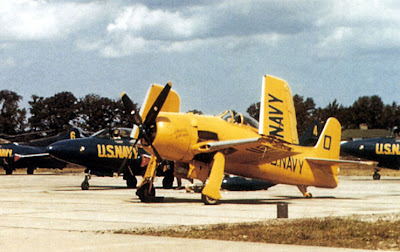 After the transition to jets the opponent was phased out.

1949-1950 F9F-2: The Blue Angels initially thought that removing the Panther’s tip tanks would provide better visibility for close formation flying as well as reduce weight. However, the Panther’s tip tanks were necessary for cross-country flights and were not intended to be readily removable (they weren’t even jettisonable) so the concept was short-lived. 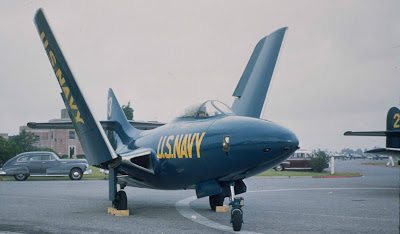 1952 F7U-1: Two Vought Cutlasses were assigned to the team for the first few months of the 1952 season. These appear to have been painted in the one part white, three parts blue mix. The Vought logo on the fin was replaced with a number for their air show appearances. 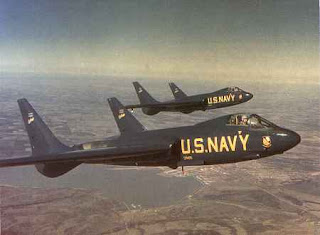 1952-1954 F9F-5: The team was reformed with -5s after a hiatus for the Korean War. In this case, there is a credible report on the colors. Bob Moore was an enlisted mechanic on the team who also assisted in painting them:: "The paint used on F9F-5 was nitrate lacquer. We mixed the colors one part insignia white (to) three parts insignia blue. The yellow was AN Yellow." The FS 595 equivalent of AN Yellow is 13591.

F9F-6: The team picked up six Cougars from Grumman in August 1953, painted the same as the F9F-5s. The ferry flight home was marred when the team leader, Ray Hawkins, experienced a runaway pitch trim at 42,000 feet and had to make a near-sonic ejection when the airplane bunted into an outside loop. He wasn’t badly hurt but the Cougar control system had to be modified so the Blues returned the F9F-6s to Grumman and flew the F9F-5 for another year. 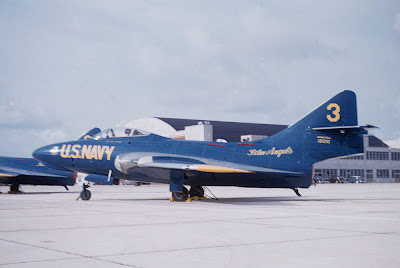 The short-nosed Tigers were only flown by the Blues for two seasons but they were in two different sets of markings. For the first, partial season, “Blue Angels” was in cursive on the side of the engine intake and the Blue Angel badge was applied to the nose. For the second, “Blue Angels” was presented in block letters and the badge was replaced with a horizontal stripe.

1959-1968 F11F-1 (late): The forward fuselage markings changed again with the receipt of the long nose F11Fs from the second production lot. “Blue Angels” was in cursive again but placed on the nose and the Blue Angels badge was reinstated, this time on the side of the engine intake and larger. The blue may now be darker but it's impossible to be sure from pictures. 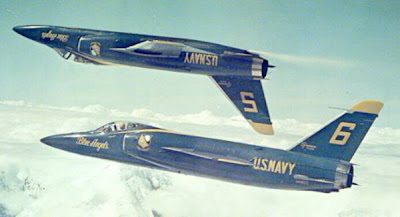 1969-1973 F-4J: With the retirement of the F11F, the Blue Angels reportedly specified specific commercial aircraft paints that did not correspond to a particular Federal Standard color. According to Elliot, the yellow was to match 13538 but was bought as De Soto Company number 826-L-001. The Blue was bought as De Soto Company number 823-L-722. FS 15050 is supposedly at least in the ballpark for the blue. However, some people think that it photographs "dark" and others that 15052 is a better match.  I have to admit that 15052 looks like the real deal on my monitor. Click Here for the two different blues. 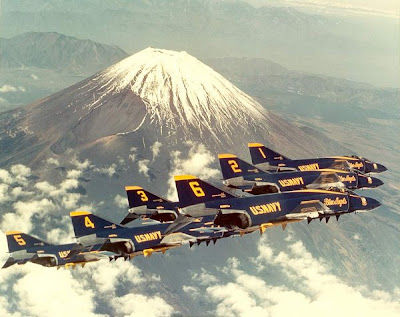 A formula developed by Hal Tippens for 15052 is to combine part of a bottle of Model Master 35044 Insignia Blue (empty it until there is 21 mm of paint left measuring from the outer bottom surface of the jar) and a full bottle of Testors Dark Blue #1111. Plasticoat 1134 “Royal Blue” is also reputed to be a close match.

In other words, the Blues picked colors out of commercial catalogs as they had for the F-4Js. In Volume 4 Elliot provides color chips for Blue Angel Blue on the A-4s for six different years: 1974, 1980, 1982-4, and 1986. 1974 is a different shade of blue from the others, similar to the difference between 15050 (1974) and 15052 (the other years). I can't see any significant difference among the other five. They also all look darker than 15052 but many who have painted a house a color selected from a chip in a paint catalog are familiar with the possibility of a perceived difference between the two-inch square in the catalog and the side of a house...

1987- F-18:According to Elliot, these were originally painted using specific commercial colors, in this case from Pratt & Lambert. Anecdotally, the colors were the same as used on the A-4. 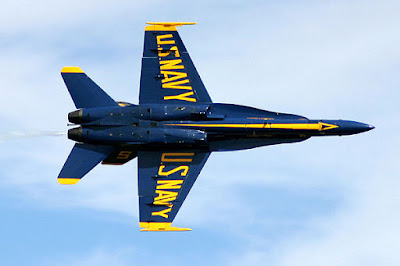 However, I recently saw a claim that it is touched up using Krylon True Blue, which is readily available. It's worth a try but another modeler insists that it's much too bright, at least for an F-4. It may be that it does work for an F-18.

A cautionary note (in addition to not relying on computer images to determine color): Based on the Bureau Numbers, this pair of pictures show two different Number 7s, presumably on different days (the tail number could be changed pretty quickly if a replacement airplane was needed). Is the color difference real or is it an artifact of lighting, the camera settings, etc?

For more on the Blue Angels airplanes, click Here.