In early 1946, the Bureau of Aeronautics issued a request for proposal for a high-speed, carrier-based jet fighter. Swept-wing designs were expected to be necessary to meet the top-speed requirement but little was known about the low-speed characteristics of swept wings. These had to be acceptable for the takeoff and landing speeds required for operation from aircraft carriers. The result was a requirement for an aerodynamic demonstrator, the Bell L-39, created in only ten weeks from surplus Bell P-63 fighters. For more information on the program and additional pictures, click Here. 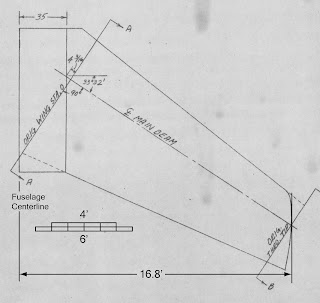 (The wing sweep along the main beam was 33+ degrees but the sweep on the quarter chord of the wing, which is how aerodynamcists define it, was 35 degrees.)

These swept wings were mounted on the P-63's stub wing with no dihedral and configured with leading-edge slats in five equal segments extending along the full length of the outboard panel. Each segment could be fixed open or closed on the ground. 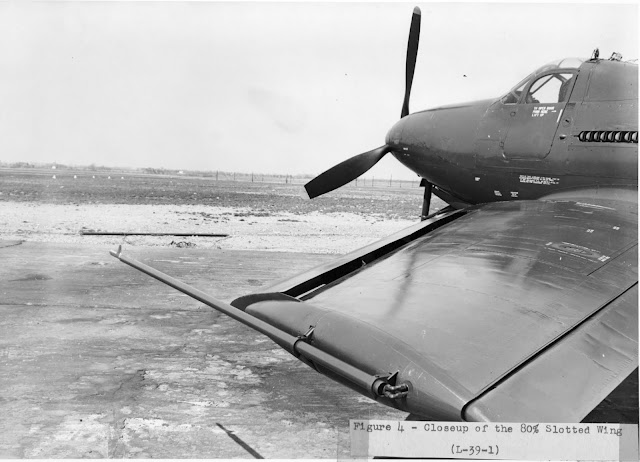 To minimize cost, the main landing gear was fixed down and the wheel wells closed off. However, the nose gear was still retractable. The nose-mounted cannon and machine guns were removed to reduce weight and move the center of gravity aft. 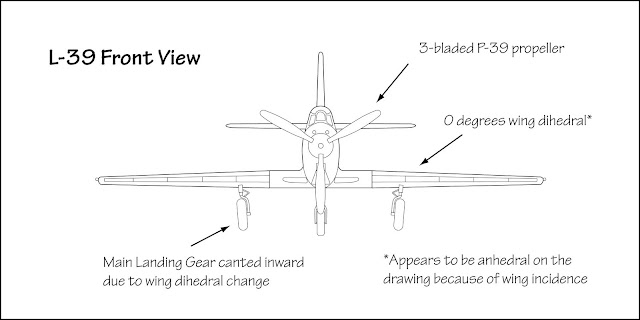 A flight instrumentation boom was added to each wing tip. The left boom was tipped with a standard aircraft pitot head. The right one was configured with pitch and yaw vanes and a gimbaled total pressure sensor. The plexiglass was removed from the canopy aft of the pilots seat and replaced with hinged sheet metal doors. This area now contained a panel of instruments that were photographed with a 16 mm camera. Two cameras were also mounted on the top of the canopy, one for each wing, and a third camera was mounted on the left inboard side of the horizontal tail, pointed at the left wing root.

Narrow white stripes were painted on the wings going straight aft from the ends of the leading edge slat segments. The wings were tufted with short lengths of white cotton string to provide a visual indication of the flow on the wings. 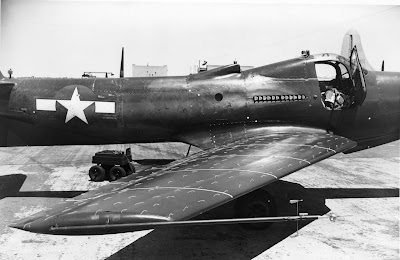 The L-39-1 was assigned BuNo 90060*. It was reportedly flown initially with the P-63's four-bladed propeller but if so, it was soon replaced with a lighter P-39 propeller to move the center of gravity aft. After the first several flights, a plug was inserted in the aft fuselage to locate the empennage further aft and tilt it so the stabilizer was more leading edge down, proving additional nose-up trim. A larger ventral fin was also incorporated. L-39-2, BuNo 90061, was first flown with the plug and an even larger ventral fin. 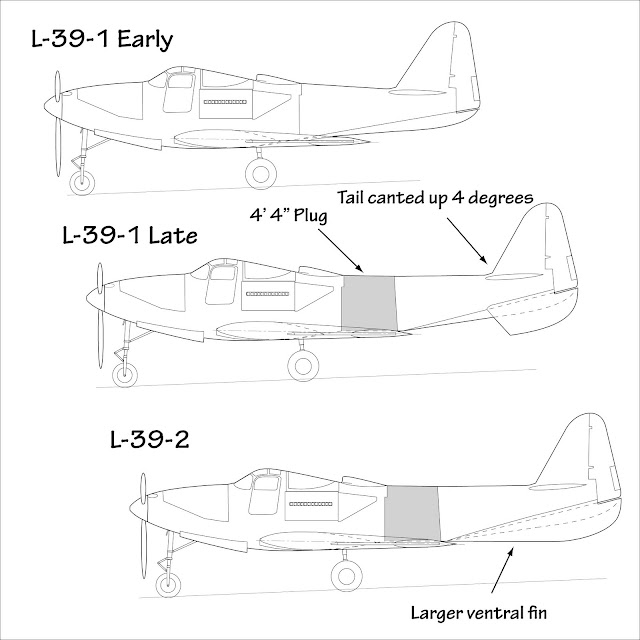 I had always assumed that the L-39s were painted gloss sea blue but realizing that I'd never seen a color picture of it, I called up Corky Meyer, a former Grumman test pilot who flew it and is an acquaintance. He said, without any hesitation, that it was olive drab "like all the Army airplanes." I responded "not gloss sea blue?" to give him a chance to reconsider but he was adamant. He was 88 at the time but still sounded sharp so it's the way to bet until someone comes up with a color picture.

Which appears to have happened. The following picture was brought to my attention by Ted Smith, who got it from the San Diego Air and Space Museum. I then found it on the excellent Facebook page of the Niagara Aerospace Museum (Home/Photos/Albums/ Rare Bell Aircraft Photographs). It doesn't appear to have been colorized and Bell took many color photographs of its airplanes at the time. I flopped it (the propeller was backwards) and took out the blue color cast. 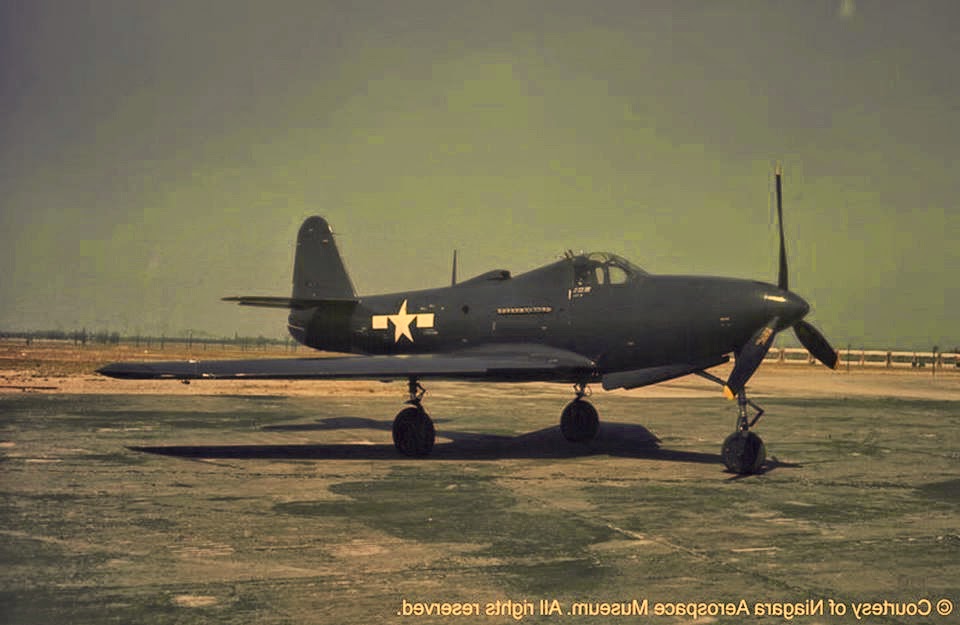 The olive drab color made sense because of the use of surplus P-63s. In all likelihood, the airplanes used were already painted and given the program cost and schedule pressure and its limited objectives, it would have been appropriate to just give the completed aircraft a touch-up with olive drab. Or they were painted after Corky flew them although the picture is of the early configuration. Or one of them was olive drab...

Note that some doubt has been placed on this picture not being colorized after correspondence with the Niagara Aerospace Museum: there reportedly was a volunteer there, now deceased, who experimented with colorizing gray-scale pictures of Bell and Curtiss aircraft. A former Bell XS-1 engineer, now in his 90s, remembered that the L-39s were olive drab, agreeing with Corky.

CMR re-released its 1/72nd resin kit of the early L-39-1 configuration with corrections and decals: 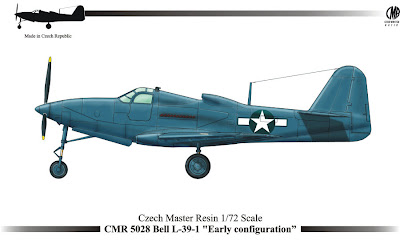 Another approach to an L-39 model is to bash a P-63 kit together with a cut down, thickened F-86 wing. 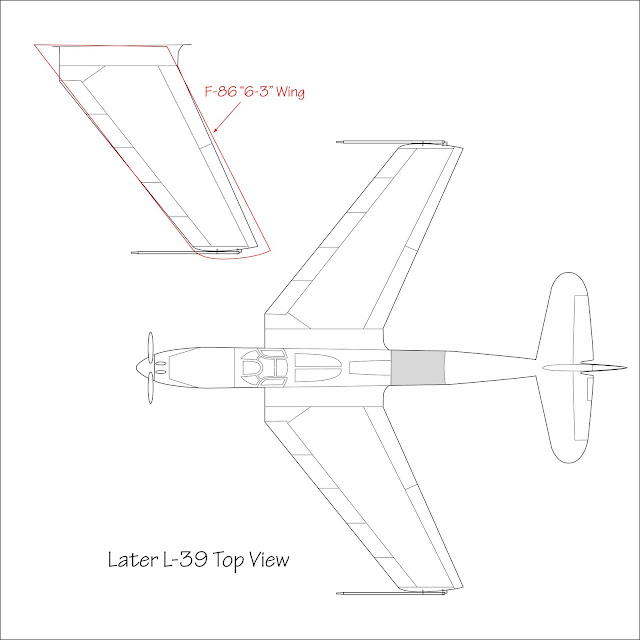 You might think twice about going to the trouble of incorporating the fuselage plug. Getting enough weight in the nose to keep the early L-39 configuration from being a tail sitter will be a challenge. Extending the tail aft and adding the dorsal fin will exacerbate the problem...

*I didn't realize that there was any question about the BuNos. There are several good pictures of L-39-2 marked with 90061. This is the best that I have of L-39-1's markings. Note the missing hyphen. 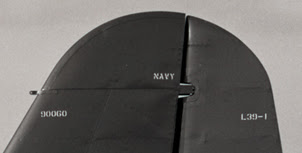