20 June 2021: After taking a closer look at the fuselage cross sections at the cockpit area, I know think—if I’ve got them right—that the reason the top of the cockpit side window of the C-1 and the E-1B is lower is not that the overhead hatch is bigger but that because of the change in curvature, the hatch has to extend farther down the side of the fuselage to be the same width, requiring that the side window be reduced in height.
Note that the following didn’t happen: Kinetic has announced the release of a 1/48th S-2E, with the possibility of a WF-2 (E-1B) and a TF-1 (C-1) to follow. Hopefully, they will not rely on the drawings that have been used for 1/72 conversions. The following are based on Grumman drawings. However, Clear Prop is currently (June 2021) working on a 1/72 E-1B kit which will be accurate as well as detailed.

The TF-1 had a deeper fuselage than the S2F-1 but shared its wing and vertical fin/rudder. It had the same horizontal tail as the S2F-2 and -3. One result of using the S2F wing is that there is no deice boot where the searchlight was located on the ASW aircraft. 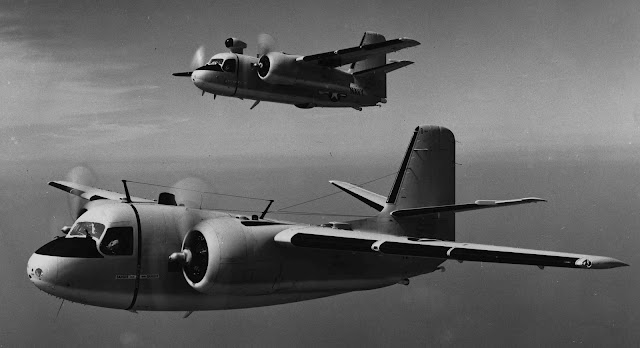 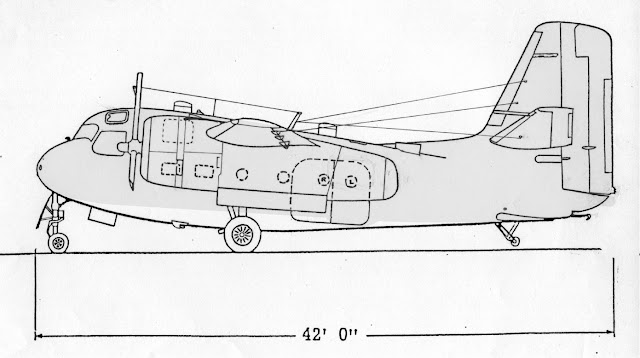 The aft end of the nacelle was terminated with a fairing. A life raft was stored in a compartment behind a door on the inboard side of both the left and right side fairing.

Note in the side view above and the following picture that the cockpit side window did not extend as high as the S2F's and there was no "crease" extending aft of the bottom of the window, indicative of the slightly wider fuselage. This picture also shows the gap in the deicing boot on the right wing. The large escape hatch on the forward end of the cabin was only on the right side of the fuselage. 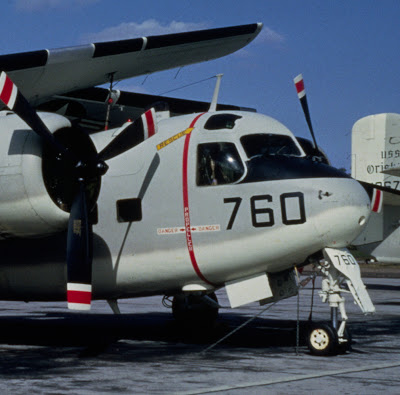 Unfortunately, I don't have factory drawings with cross-sections that I trust. The following is my best guess based on what I have including pictures. The gray area is the cross-section provided on the Grumman WF-1 drawing for modelers. Note that the C-1 and E-1 fuselages do not have the longitudinal crease below the cockpit side window like the S2F and the upper side of the window is lower than it is on the S2F. The overhead hatch looks different as well and clearly extends more aft. These differences (except for the length of the overhead hatch) appear to result from the C-1 and E-1 fuselages having an oval cross-section immediately aft of the cockpit. 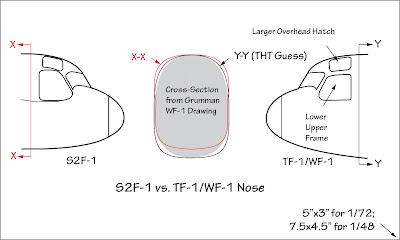 The WF-2 (E-1B) fuselage was based on the TF's but was stretched 18 inches between the wing and the cockpit. Mike Hazlewood (http://www.vagabonddecals.com/) went to the trouble of overlaying the C-1 illustration above (created by me with whiteout modifications to someone else's drawing for an IPMS Update column many years ago) and the E-1 drawing below (created by me from Grumman-provided material using Illustrator) to illustrate that. Note that the tailhook installations don't overlay, which I think they should, and there are other slight discrepancies (click HERE for my diatribe on making accurate drawings), but it does show the stretch and the difference in the pilot's side windows. 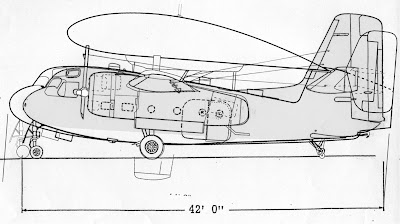 The wing was redesigned to accommodate a new fold mechanism necessitated by the radome above the fuselage. 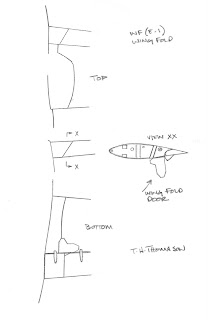 The chord was increased slightly between the wing root and engine nacelle, as was the span, by 3' 8 3/4". 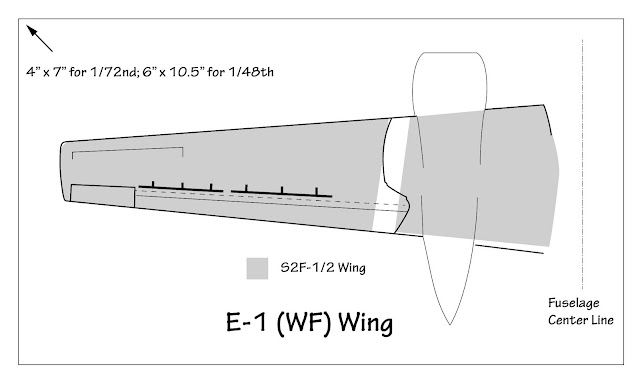 The dihedral was also increased outboard of the wing fold joint. 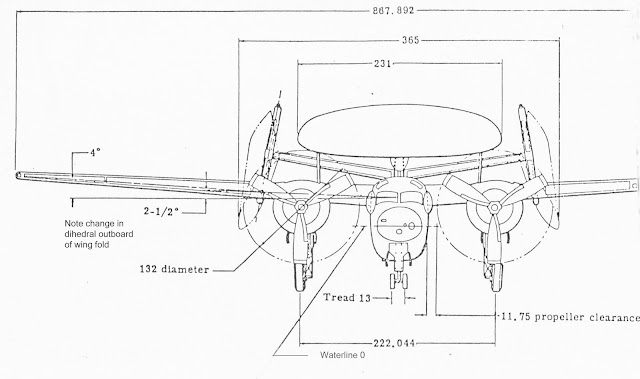 The requirement to redesign the wing in such detail also resulted in the deletion of the gap in the deice blanket coverage on the C-1's right wing.

Another oddity resulting from the wing fold was a change to the wheeled tail bumper that allowed it to function as a tail wheel and free swivel, since the Tracker was a tail sitter with the wings folded. 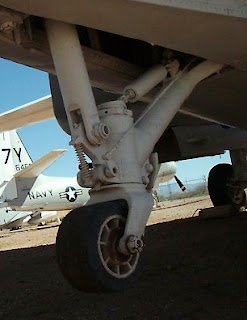 The major blunder in all the 1/72nd conversions and kits that I've seen is the planform of the radome. (The added depth of the fuselage is not fully realized as well.) I had read that the Mach 2 fuselage does not have the 18" plug in the forward fuselage but Jackman over on Aircraft Resource Center has begun to build one—see HERE—and determined that the overall length, at least, is correct.) This is a build of the RVHP kit, which also clearly has the wrong radome planform: HERE For my notes on a partially built Falcon conversion, see http://tailhooktopics.blogspot.com/2013/08/half-baked-172nd-grumman-wf-2e-1b.html. However, as Walt Fink's build demonstrates, it can result in a very nice model: 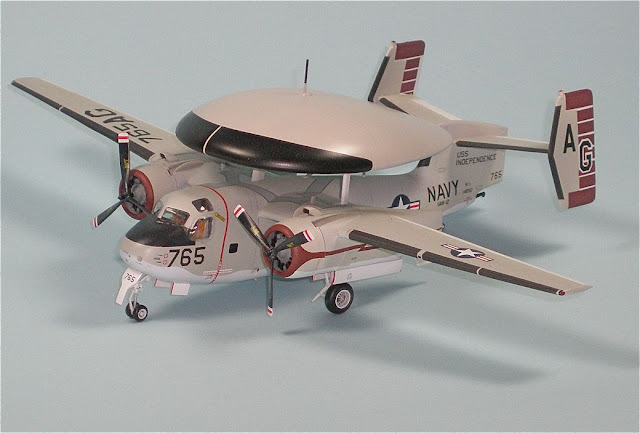 This is a pretty good drawing from Grumman documents that shows the correct planform of the radome: 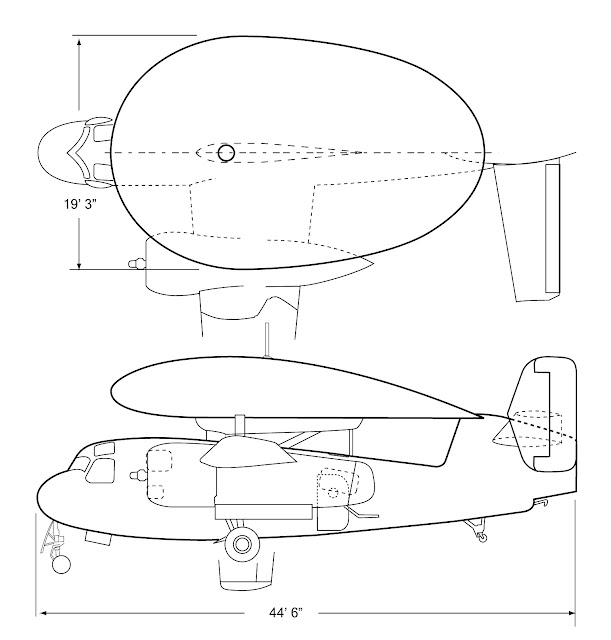 Note that the E-1B has the large carburetor air scoops on the top of the nacelle and CSD cooling air inlet/exhaust (on the lower right hand side of the engine nacelle ahead of the gear door on both the right and left nacelle) as the S-2D/E/G and a similar fuel dump pipe needed to get the gross weight down quickly in the event of an engine failure shortly after takeoff.

Don't be confused by pictures of the WF aerodynamic prototype created from a TF (C-1). It did not include all the physical changes, for example the WF wing and the plug in the forward fuselage. After Grumman test, the radome was removed and it was operated as a transport. 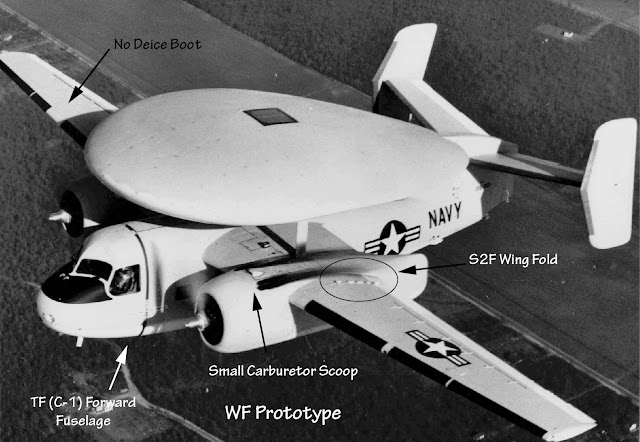 Someone asked me what the WF-2 (E-1B) cabin looked like. All I have at the moment is this diagram from the mockup review. 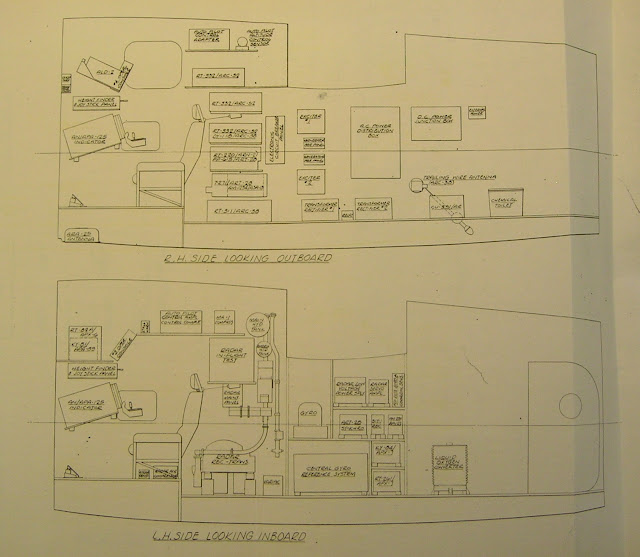