Grumman only built 201 F11F Tigers, the jet-powered equivalent of its F8F Bearcat: a day-fighter tailored for low cost, maneuverability, and minimum size at the expense of maximum performance. It was in accordance with the vision of the BuAer Fighter Class Desk officer who authorized its development using F9F production contract funds, which was a standard practice at the time although generally not for this degree of change. Unfortunately, after he left BuAer for his next assignment, the new Class Desk modified the procurement requirements for the competitive day fighter to emphasize performance instead. The result was the F8U Crusader, which outclassed the F11F with its original engine in just about every respect.

For other information on the F11F, see http://tailspintopics.blogspot.com/2014/10/f11f-tiger.html 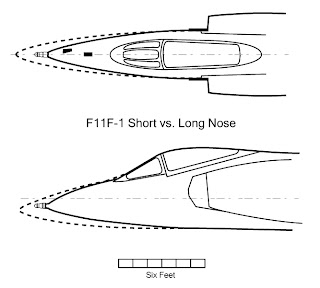 The first three F11Fs, then designated F9F-9s in accordance with their origination as a product improvement of the Cougar using its production funds, had really short noses.

For production, the nose was lengthened and incorporated an in-flight refueling probe at its tip. The short-nosed Tigers also had only two stores pylons. The ranging radar was located behind a dielectric panel on the nose halfway between the windscreen and the tip. The gun camera was collocated behind a clear panel on the upper right side of the nose just aft of the tip. 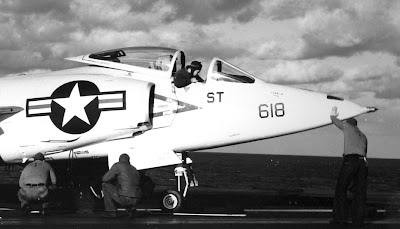 Wright had problems with development of an afterburner for the J65 with serious consequences for Grumman’s test program and the F11F’s performance. The solution was the J79. The Navy agreed to let Grumman substitute it for the J65 in the last two Tigers of the first production lot, if for no other reason than to get early flight experience with the new engine. (General Electric also put a J79 in one of the two F4D prototypes as part of their development program.) However, in mid-1955 there was a plan to buy a J79-powered variant of the F11F, designated the F12F, and BuNos 143401 and 143402 were issued for prototypes. The contract was canceled on 4 January 1956. The two F11F-1Fs were now referred to as "aerodynamic and powerplant flight test vehicles serving as prototypes for potential production F11F-2 aircraft." 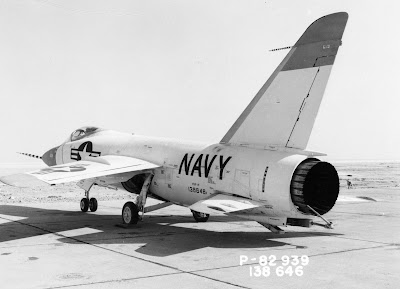 The Navy intended to equip the second lot of F11Fs with a visual-assist radar for an all-weather capability employing Sparrow IIs, so the nose and instrument panel were modified accordingly. The in-flight refueling capability was changed to a probe that retracted into the right upper side of the nose and the gun camera was moved to the base of the windshield. However, the Sparrow II program wasn't fairing any better than the F11F so for production, the APG-30 ranging radar was retained but relocated to the nose. As a result of F11F-1F flight test, a leading edge extension was added to the inboard leading edge of the wing along with two more stores pylons.

Martin-Baker seats were bought for the F11Fs but they were not installed, except for two airplanes pulled out of Davis Monthan storage in 1974 for a flight test evaluation of the Rohr in-flight reverser. One was modified with the reverser and the other provided the unmodified baseline.

As usual, the best single references are from Steve Ginter. The F11F-1 is covered in Naval Fighters Number Forty and the F11F-1F in Number Forty-Four.

Hasegawa produced an excellent 1/72 kit of the long-nose F11F. It was subsequently reissued with a resin part for a conversion to the short-nose configuration, but unfortunately the transition to the shorter nose begins too far forward, which means it doesn’t look quite right. Some might question whether the stowed depiction of the arresting hook, upside down and backwards, is correct but it is. On prior Grumman fighters, the tail hook slid aft in a tunnel and hung down from the very aft end of the fuselage. The F11F installation was simpler and lighter.

Another minor problem with the Hasegawa kit is the main landing gear installation.The top of the main gear strut has to be positioned slightly away from the interior of the wheel well (I put a small wedge of plastic on the interior of the strut just under the locating pin) or it cannot be positioned at the correct angle due to interference with the lower edge of wheel well. The attachment pegs on part C12 also have to be modified as well so it can be properly positioned. (Also see Bill Abbott’s fix: he basically increases the length of the peg that attaches to the fuselage: https://flic.kr/p/5wmPDQ ). 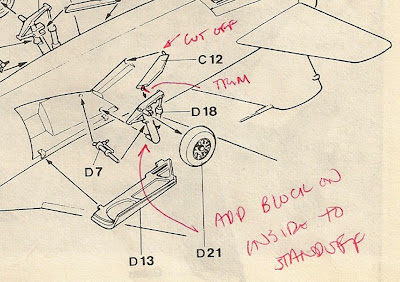