The McDonnell F3H Demon is another of the airplanes that doesn't get the respect that it deserves from the aviation enthusiast equivalent of the mean girls in high school. It provided carrier-based all-weather defense against Soviet bombers for several years, proving far more useful than the flashier and less disparaged fighter that it was initially a backup for. The much-praised McDonnell F-4 (F4H) Phantom owes more than a little to the experience, good and bad, by McDonnell and the Navy with its older brother.

The Bureau of Aeronautics initiated the F3H program as a backup to the Douglas F4D Skyray. They were intended to be all-weather interceptors launched in response to the warning of an incoming bomber raid, climbing rapidly to altitude and destroying the threat with a salvo of unguided 2.75-inch diameter folding fin rockets aimed solely by radar. Both were to be powered by the new Westinghouse J40 engine.

Unlike the F4D, which carried the rockets in pods under the wings, the original F3H incorporated a 24 rocket-filled tray that deployed out of the belly. It was also a sleek, gorgeously sculpted design that looked like it was going Mach 1 even when it standing still. 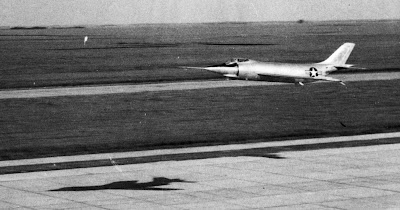 In 1950, however, before the XF3H even flew, the Navy decided to make the Demon a backup as well for the two general-purpose fighters that it had on contract, the Grumman F10F Jaguar and the Vought F7U-3 Cutlass. This required an increase in fuel capacity and a change in armament capability, but Westinghouse was developing an uprated J40 which would allow the increase in gross weight, and with minimal armament and fuel load, provide the rate of climb necessary for the interceptor mission. The fuselage was deepened slightly, the nose canted down by five degrees for better visibility on approach, the inlets enlarged by 26 square inches, and the aft fuselage extended rearward about 18 inches, in part to compensate for the addition of four 20 mm cannon and their ammunition in the forward fuselage below the pilot in lieu of the internal rocket storage. The radome shape was changed to improve transmissivity.

The wing area was increased slightly by extending the leading edge forward, increasing the slat chord by nine inches. However, the basic structure of the wing was also redesigned to increase its stiffness and incorporate a new wing fold break required by the change to inboard ailerons that had been developed on the XF3H for better roll control at low speeds. The horizontal stabilizer area was increased as well and changed from a stabilizer/elevator design to a stabilator. 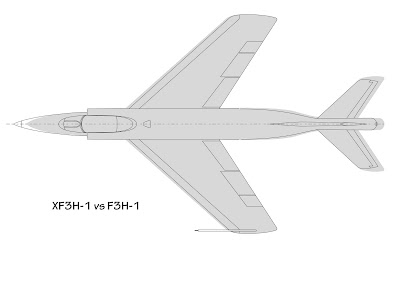 The F3H-1 also had a one piece windscreen, among other detail changes.

For some more detail on the differences between the -1 and -2, see http://tailhooktopics.blogspot.com/2014/06/converting-f3h-2-to-f3h-1n.html

Unfortunately, the original J40 disappointed from just about every standpoint imaginable and the Navy was forced to replace it in both the F4D and F3H as well as the Douglas A3D Skywarrior. Douglas got the Pratt & Whitney J57; McDonnell was forced to make do with the Allison J71, an inferior engine compared to the J57. As part of the redesign, the F3H-2 incorporated a wing of greater area that also had a cambered leading edge. 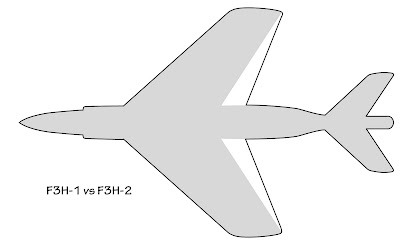 The first production -2s retained the one-piece windscreen and auxiliary air inlet doors of the -1 but the windscreen was changed to a more conventional three-piece one after what may have been a fatal bird strike on the original design and the auxiliary air inlet was deleted as not required. By happenstance, the -1 was produced when Navy fighters were painted overall gloss sea blue and the -2, when the basic scheme had changed to gull gray and white. 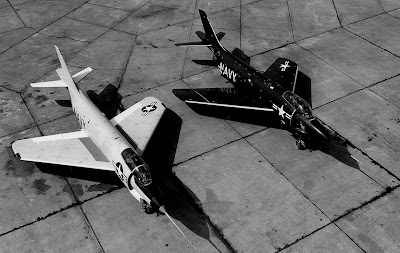 The first -2s were the -2N and -2M. The former was equipped with a Hughes APG-51A radar and armed with four 20 mm cannon and Sidewinders. The latter was armed with the cannons and the Sparrow I missile, which required the substitution of the Sperry APQ-51A radar. The ultimate configuration was the -2, which had an APG-51B radar to control Sparrow III missiles.

Many if not most of the -2Ns were updated to the -2 configuration in overhaul. The first production -2 was BuNo 143403. My understanding is that none of the -2Ms became -2s and were soon relegated to shore-based squadrons for initial checkout in the F3H or put into storage before being stricken. 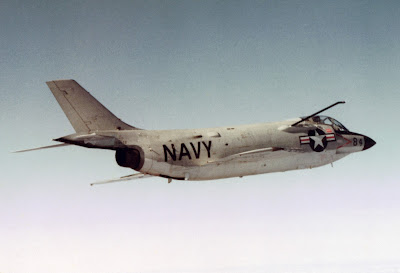 Spoilers were subsequently scabbed onto the wing to improve roll control. 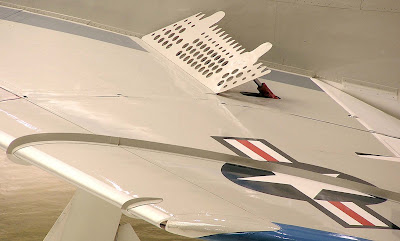 
Martin Baker seats replaced the McDonnell seats late in -2 production (BuNo 146709-146740) and were retrofitted to earlier aircraft when they went through overhaul. The first ejections using a Martin-Baker seat from the F3H reportedly occurred in March 1958 with the last in a McDonnell seat in November 1960.

The "beaver tail" was also shortened on BuNo 143403 and subsequent. I don't know if this change was retrofitted but I have seen a picture of BuNo 136976 (an F3H-2N converted to an F3H-2/F-3B) toward the end of its career and it still had the long beaver tail. 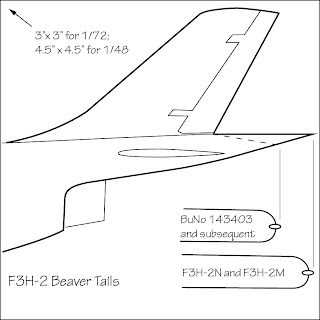 The two upper 20mm cannon were removed from some aircraft in service to reduce weight. 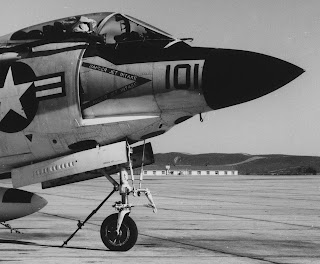 For more on the XF3H and subsequent Demon proposals, see American Aerospace Archive 4, HERE. My book, Naval Air Superiority, contains a chapter devoted to the F3H; purchase information is provided in the sidebar, right. Steve Ginter's F3H monograph is available from Sprue Brothers.

Not counting the Airmodel vacuform "kit", which is neither complete nor accurate, up until early 2019 there were two 1/72 scale F3H kits, Rareplanes and Emhar, both of the -2. The Rareplanes is a fairly complete and accurate vacuform kit, lacking only decals. I built this one several years ago.

There are also four kits, again of the -2 variants, in 1/48. Phil Brandt built and reviewed the Golden Wings vacuform in his inimitable style HERE. The Grand Phoenix injection-molded kit is reviewed HERE and HERE. The AZmodel kit (reportedly recycled Grand Phoenix molds with difference ordnance and marking options) is reviewed HERE. The Hobbyboss kit is reviewed HERE and HERE.
In the latter review by Gary Meinert, it is noted that:  "This kit (No.80365) is incorrectly labeled the F3H-2M. In fact, it is the F3H-2 with the short tail cone or "beaver tail". ( In 1962, the F3H-2 was re-designated F-3B). The initial Hobby Boss release from last year (kit No. 80364) has the long beaver tail and is therefore an F3H-2N or 2M." Terry Hill provided Hobby Boss build notes HERE

Furball has just released a set of 1/48 decals for various colorful F3H-2s and 2Ms. For a summary description and review, click HERE.
Posted by Tailspin at 8:53 AM