From the beginning, the AD Skyraider was adapted for other missions requiring a heavy burden of avionics and additional crewmembers, such as antisubmarine warfare (ASW), airborne early warning (AEW), night attack, and electronic reconnaissance/countermeasures. The added crew were seated in the fuselage behind and below the pilot.

Douglas proposed a significant fuselage modification to the AD in December 1949 for an antisubmarine warfare airplane that combined the hunter and killer requirements into one platform. It used the same basic wing, landing gear, and other systems of the AD-4 but the upper half of the front half of the fuselage was widened for side-by-side seating and a compartment provided aft of the cockpit. The area of the vertical fin and rudder were increased by about 50% to eliminate the need for tail fins on the AEW version. The speed brakes on the sides of the fuselage were deleted but the large belly-mounted speed brake was retained. The main weapons pylon on each wing was also changed to shift the lug attach points forward, possibly to shift the cg forward when 2,000-lb bombs or full external tanks were loaded on this pylons. (I've also read that it was for clearance of a long store that I have yet to identify.) To minimize the weight increase, the AD-5 reverted to having no landing gear wheel doors (see http://tailspintopics.blogspot.com/2016/04/ad-5-versus-ad-67-main-landing-gear.html). The basic AD-5 was still about 600 pounds heavier than the AD-4. The prototype, a conversion of an AD-4, first flew in August 1951. For a side-view comparison, see http://tailspintopics.blogspot.com/2014/02/the-widebody-skyraider-redux.html.

Although at least one AD-5S prototype was built and flown, the Navy chose to continue with production of the Grumman AF Guardian for the ASW mission and utilize the AD-5 for the missions which required additional crew and as a utility aircraft. The production variants were the AD-5N (A-1G) for night attack, AD-5W (EA-1E) for AEW, and AD-5 (A-1E) utility version which retained day-attack capability but could be readily converted for carrier onboard delivery (COD), target towing, emergency medical evacuation, etc. Fifty-four of the AD-5Ns were subsequently converted to an AD-5Q (EA-1F) dedicated to electronic warfare. 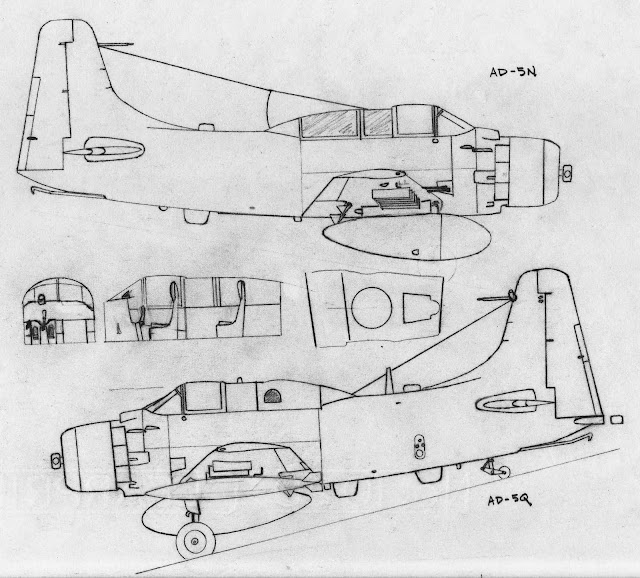 The Q had seating for two mission specialists in the cabin with a third to the right of the pilot. 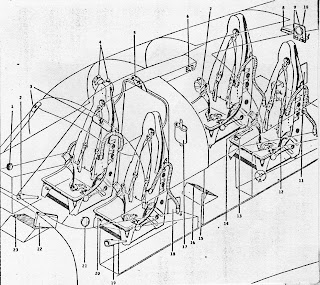 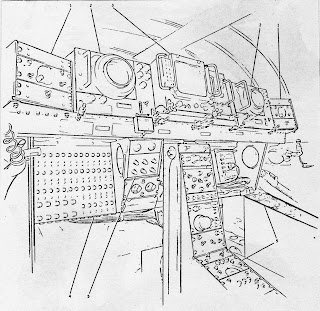 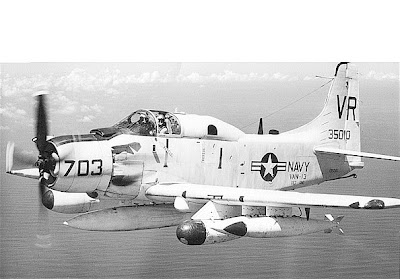 The AD-5N and AD-5W had only one crew member in the aft cabin, seated on the left side, in addition to one in the cockpit in the right seat. These are illustrations for the AD-5N. 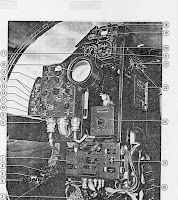 The aft cabin of the AD-5W: 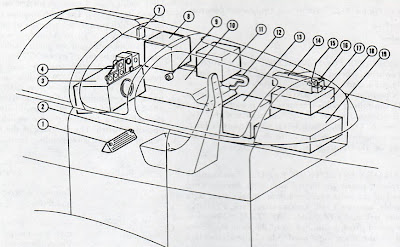 There were also a couple of boxes behind the crew seat.

For the detail of the AD-W belly aft of the radome, see  http://tailspintopics.blogspot.com/2016/04/ad-5w-belly-detail.html

The utility AD-5 was delivered with various kits that provided for four passengers in the cabin, four stretchers, a tow target capability, etc. (the tow target and reel are in a pod on the belly of the colorfully marked AD-5). 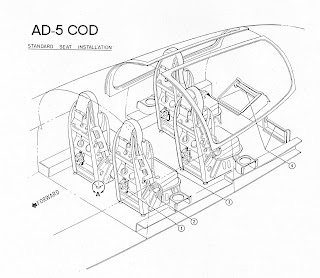 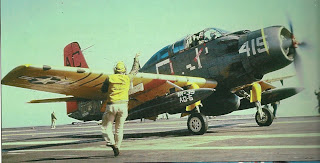 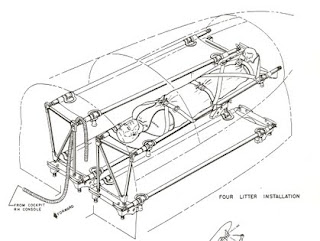 The 1/72 Monogram kit is readily available but unfortunately, its fuselage is slightly undersized while its wing is not. These are basically out-of-the-box (except for markings) builds of the Tsukuda and Monogram kits: 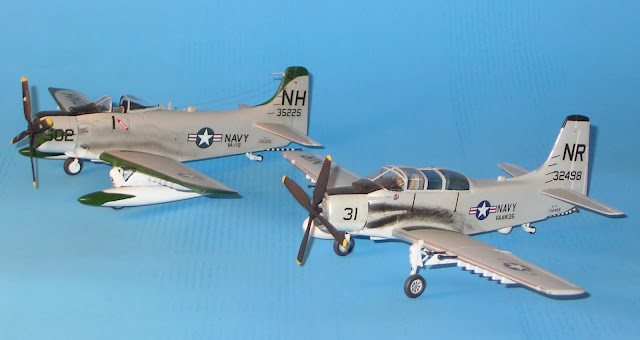 There are ways to section the fuselage and somewhat correct for this. For an example, see here. 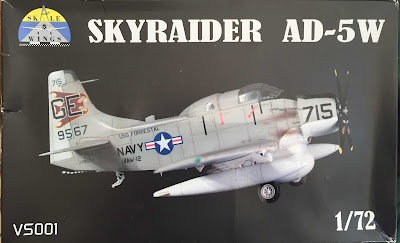 A conversion of the somewhat rarer 1/48 Matchbox AD-5 to correct its problems has also been done, see here and here. A better and perhaps not more expensive 1/48 alternative given the availability of the Matchbox kit might be the C & H Aero Miniatures conversion kit. Darren Roberts used it to create this EA-1F. 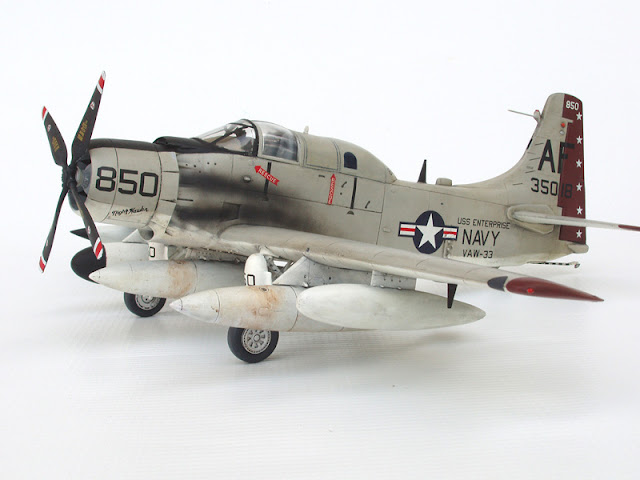 1/72 and 1/48 resin A-1E cockpit detail kits are available from Cobra Company. One is included in the Aero Miniatures conversion.

RVHP produced relatively expensive and not widely available resin 1/72 conversion kits of all the variants, including the AD-5S, to be used with the Hasegawa AD/A-1 kit. 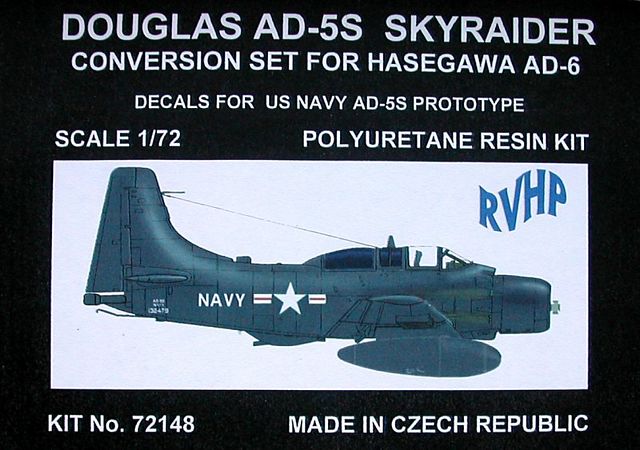 There is an excellent build article here:http://z15.invisionfree.com/72nd_Aircraft/index.php?showtopic=6439&st=0&#last
Posted by Tailspin at 9:02 AM