Changing from Blue to Gray/White

After some experimentation, including leaving aircraft in a mostly natural metal condition like the Air Force*, the Navy decreed in February 1955 that tactical aircraft were to be painted light gull gray on top (except for control surfaces) and white on the bottom. This took time to accomplish (for example, natural metal aircraft being overhauled were not required to be completed in the gray/white scheme until July 1955). For a year or so, aircraft in some squadrons were in three different schemes like these Red Ripper F2H-3/4s. 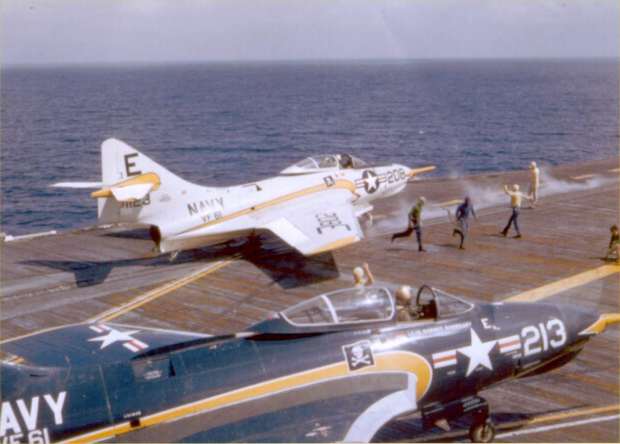 Note that the VF-61 Cougars are trimmed in what appears to be "orange", which is actually a shade of yellow. The second squadron in an air group had previously been trimmed in white when aircraft were gloss sea blue. 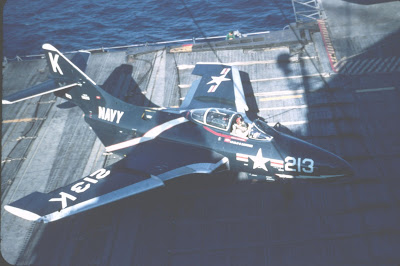 White trim was not nearly as dramatic with the gray/white scheme so the trim assignment for the 200-series squadron was changed to orange-yellow. Since that had been the trim color for the 400-series squadron, it was now assigned orange. The 300-series squadron trim continued to be light blue and the 500-series, green.

The rudder was not originally to be painted white but this requirement was formally introduced in December 1961. However, some rudders were white before that, particularly on aircraft that might be assigned to deliver a nuclear weapon, to minimize the thermal effect of a nuclear explosion on the thin-skinned control surface.

Before March 1954, Navy jet fighter cockpits were basically black from the consoles up and interior green below; ejection seats were interior green, at least in the sea-blue painted Panthers and -2 Banshees. After that, the cockpits were to be dark gull gray with black consoles and instruments. I'm not sure whether the sides of the cockpit and the instrument panel itself were now gull grey at this point but the intention was to lighten up the cockpit interior. (There was also cockpit-color experimentation circa 1956 which resulted in at least some FJ-3 Furies having a bilious green interior.) The change was made to both new production and aircraft coming out of overhaul but certainly not immediately. For one thing, it took time for the direction to flow down to the manufacturers and overhaul depots, the revised drawings and manufacturing/overhaul paperwork to be prepared and approved, etc. Aircraft in production or overhaul at the time would certainly not be subjected to the change because of the rework involved. Therefore a fleet airplane that had just come out of overhaul in early 1954 might not get a gray/black interior for a couple of years, if ever.

However, if the exterior is gray/white, then it's likely that the interior is gray/black since the interior change predated the exterior change. It would appear that ejection seats became black with the change to grey/white but there were exceptions. For example, the F4D ejection seat was black in early grey/white airplanes but subsequently became dark gull grey like the cockpit interior. (There was apparently no specific color assigned to the ejection seat officially until May 1963, when they were to be painted dark gull grey; however, the Martin-Baker seats were always black...)

The official change to white wheel wells was not made until July 1956. Up until then after World War II, they were either sea blue, zinc chromate, or white. At some point early on in the gray/white era, the interior of speed brakes and flaps/slats and the edges of the landing gear doors and other "pinch points" were to be red. However, this doesn't seem to have been consistently applied for a while. (It, however, had been a standard practice at McDonnell on its blue Navy jets, at least.) The F4D Skyray landing doors, for example, appear to have been rarely edged in red, although the interior of the slats was red later on. See http://tailspintopics.blogspot.com/2012/10/painting-crush-points-red.html for more. Also note the light gull gray rudders, the dark gull gray anti-glare panel, and the black ejection seat in the following picture early in the F4D's operational career. 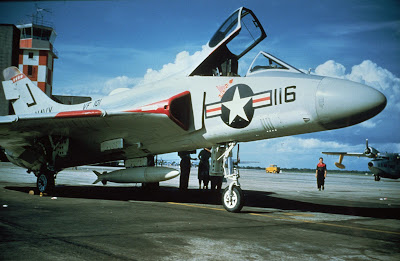 As shown in the F4D photo, rescue warnings were originally red with white letters. These eventually became yellow with black letters (the directive to do so was issued in September 1962 but the F4H Phantom had yellow rescue markings from its first flight in May 1958). For more, see http://tailspintopics.blogspot.com/2014/04/a-brief-history-of-rescue-arrow.html

The configuration of the jet intake warnings also changed over time.

The leading edges of the wings and tail surfaces on all tactical aircraft (it had been just the jets) were now to be protected from erosion by the application of Corogard, a gray epoxypolymide paint (requires a hardener) that was “aluminized" with the addition of aluminum particles. It was a relatively thick coating and the perceived color and shininess varied with lighting and length of time since it had been applied. Some knowledgeable observers report it as being close to silver when new that weathered to a light gray. Another reported shade is close to aluminum lacquer paint. Another description is “semi-gloss medium metallic gray.”