At the end of World War II, the Navy had more carrier-based propeller-driven fighters than it knew what to do with. The F6F Hellcats were apparently judged to be less useful for air group operations than the F4U Corsairs, so they were assigned to training squadrons and drone operations, among other things.

The F6F drones were initially developed at the Naval Air Development Unit at Johnsville, Pennsylvania. At least one of these was painted a yellow-orange overall and another may have been an odd shade of blue. The extended tail wheel was a feature of these aircraft, which were recoverable. 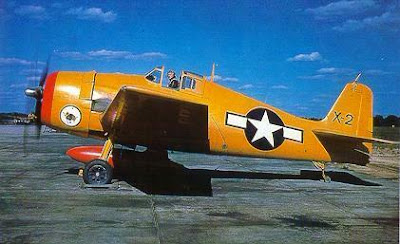 There appear to have been at least three major uses for the F6F drones. The first was a fleet of aircraft that sampled airborne radioactivity after atomic bomb explosions during Operations Crossroads in 1946. These were painted bright red with different color empennages, apparently to denote radio frequency. The national insignia lacked the red bar.

The second use was as targets. In 1947, VU-7(a) was based at NAS Santa Ana for the continuation of pilotless aircraft evaluation. The squadron was assigned Culver TD2C / Grumman F6F Hellcats as target aircraft for surface-to-air gunnery training with Beech SNB Expeditors as the drone controllers. OLF Palisades was used to launch and recover the drones. (On-board pilots ferried them to and from Santa Ana.) The squadron was relocated at MCAS El Toro in 1948. Target drone operations were subsequently established at China Lake and Point Mugu for missile-test purposes and at other locations, again using utility squadrons, as targets for training. Some aircraft were modified with “tip tanks” and large wing tip fairings containing flares to simulate a jet exhaust, and therefore be of appropriate interest to the heat-seeking Sidewinder missile being developed… In December 1952, an XAAM-2 Sparrow missile was used to intercept and destroy an F6F flying from Point Mugu, supposedly the first successful air-to-air guided missile kill.* In September 1953, the Sidewinder made its first successful interception, again destroying an F6F, this time being operated from China Lake. In general, these aircraft were painted either bright red or florescent red overall. 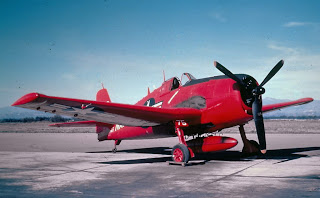 The third use was as a crude surface-to-surface guided missile. There were six missions launched from Boxer between 28 August and 2 September 1952 during the Korean War against bridges, tunnels and power plants. Guided Missile Unit 90 had been formed at Naval Air Development Unit at Johnsville, Pennsylvania. AD-2Qs were used as controllers. The F6Fs carried a TV camera in a pod under the right wing for targeting. An antenna for transmission of the TV image to the controller in the AD-2Q was mounted on the upper surface of the right wing above the pod. The attack drone F6Fs were overall glossy sea blue with standard national insignia and branch of service markings. They were differentiated with V1 through V6 markings on the cowling. Note that these aircraft did not have the extended tail wheel (they weren’t coming back) or tail fins on the bomb (it wasn’t going to be dropped). Of the six missions, there was one hit, one abort (then what?) and four misses. 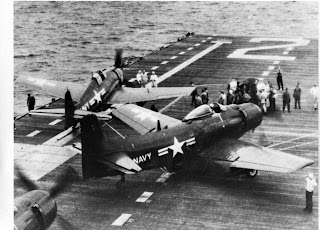 *An F6F drone was reportedly used to launch the first Sparrow from an aircraft because there had been a couple of fatal accidents at China Lake as a result of rocket launches. This picture, furnished by Phillip Fridell, shows an F6F drone (note the extended tail wheel) carrying a Sparrow, although it was being piloted at the time. 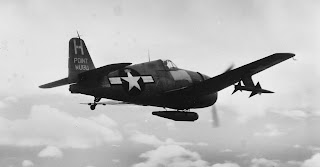 For more pictures of this F6F drone, see the entry in Phil's excellent blog here.
Posted by Tailspin at 8:27 AM