My post on the differences between the XFL-1 and the P-39 (https://tailspintopics.blogspot.com/2015/09/modeling-bell-xfl-1-airabonita.html) included a comparison of the respective wing planforms. As it happened, the P-39 outline was taken from a Bell wing station drawing that I've since discovered wasn't rigorous about the actual shape of the wing tip. The post was also created before I mastered Illustrator and started to use a dimensioned box around a drawing to allow it to be accurately scaled.

Recently I discovered that the P-39 outline was being taken as being accurate by at least one modeler. I was chagrined to discovered that it was not, certainly with respect to the wing tip. I therefore went back and created as accurate a P-39 wing planform drawing as I could from the data available to me. It's posted here: http://tailhooktopics.blogspot.com/2018/09/bell-p-39-wing-planform.html

I then redid the XFL-1 drawing, which was based on a detailed Bell wind-tunnel model drawing. I was happy to see that it overlaid perfectly with the one in the original post. I then added the P-39 drawing to it along with a dimensioned box. 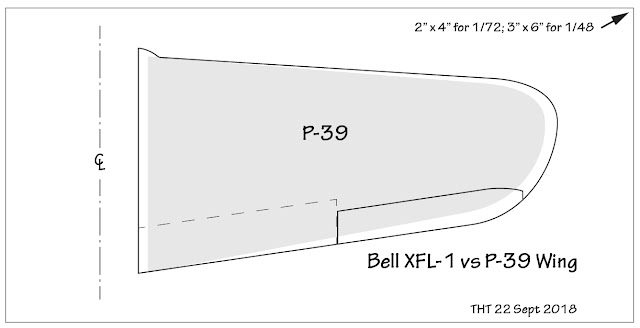 (Note that the root of the XFL-1 wing is closer to the fuselage centerline than the F-39's.)

The original post has been updated with this drawing.
Posted by Tailspin at 12:41 PM