Are you going to believe me or your lying eyes?

During the F4D mock-up review in March 1949, it was determined that the over-the-nose visibility of the specification, critical for a carrier-based airplane, was not adequate for a tailless airplane. The nose of the mock up was therefore cut off ahead of the windscreen and angled downward for a followup review a few weeks later. 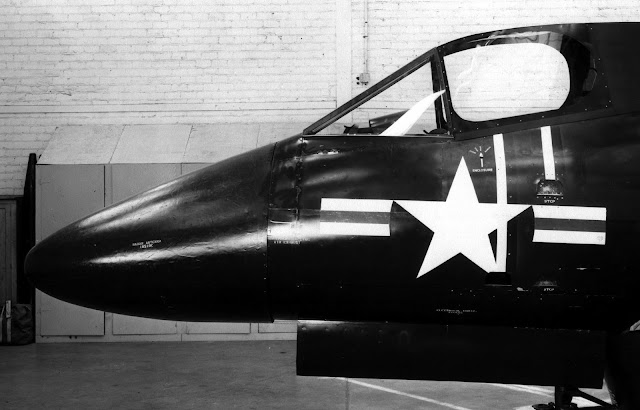 Although it looks like the nose of the production F4D is angled slightly downward, I have maintained that the bottom of the forward fuselage is actually flat. The appearance of a downward cant, in my opinion, was an optical illusion created by the angle of the radome's attachment to the fuselage. This was buttressed by a very good Douglas general arrangement drawing (not definitive like a lines drawing would be, but it had clearly been done with care) and a close examination of pictures. This is an example from my post on the F4D, http://tailspintopics.blogspot.com/2010/10/bat-out-of-hell.html. 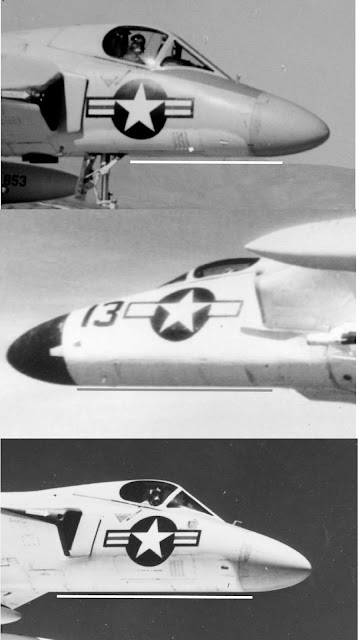 However, I was prepared to eat crow after looking at some fairly high resolution F4D pictures recently. There seemed to be a small but nevertheless downward tilt of the bottom of the nose that began at the forward end on the nose landing gear wheel well. 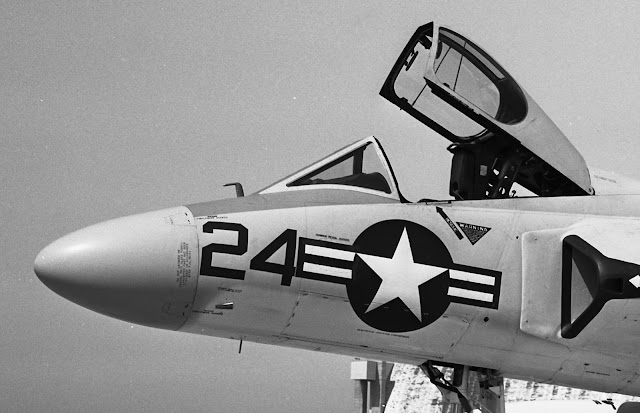 This one had the least clutter in the background and the appearance of the droop so I used it to once again examine the flatness of the nose profile using Illustrator (you can maximize the size of either picture by clicking on it; then double-clicking on the result and selecting view image, which results in an image with a magnifying glass for a cursor; and then clicking again).

I put a fine red line along the bottom of the fuselage as precisely as I could, copied that and pasted it as fat white line just below it, and then inserted identical red circles between the two lines. There may be a droop there, but it's pretty subtle.
Posted by Tailspin at 12:22 PM