Thanks to Mick Roth and Rick Morgan, who generously provided most of the information and many of the illustrations for this post and then patiently answered my questions. However, this is still a work in progress and subject to their review (and comments from others for that matter).

The escalating air battle during the Vietnam War resulting in the introduction of the big SA-2 Guideline surface-to-air missile (SAM) by the North Vietnamese.

Various counters to it were successively employed by the Air Force and the Navy including electronic warning, evasive maneuvers, jamming, and anti-radiation missiles (ARM). The latter was the most satisfying, because—if successful—it resulted in the destruction of the SAM-site radar. However, the original ARM (the Shrike, which was based on the Sparrow air-to-air missile) had less range than the SAM, making an attack on a SAM site too much of a fair fight.

The solution was the repurposing of the U.S. Navy's big ship-based SAM, the RIM-66/SM-1 Standard Missile, from anti-aircraft to anti SAM-site radar. 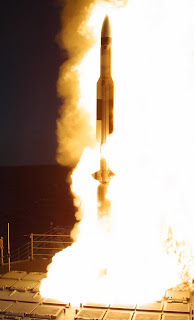 Since it was a bit big (pushing 1,400 lbs) for the little A4D Skyhawk then being used for the Iron Hand missions, the resulting AGM-78 Standard ARM missile was to be carried by modified Grumman Intruders, designated A-6B. As the mission equipment, tactics, and missile evolved to be more effective, the A-6Bs were continuously updated. From a modelers standpoint, there were four different configurations (see http://rickmorganbooks.com/a-6b-standard-arm.html for a more detailed and less informal description of airplane and missile).

Mod 0 Early: As shown on the following picture of a test-bed NA-6A, the main external configuration feature was the addition of APS-107A/B* elongated-diamond homing antennas on each side of the upper part of the radome and the lower side of each engine nacelle along with wing and stabilizer tip antennas. Several other small antennas are also circled. The BDA (Bomb Damage Assessment) aft antenna and right side ER-142 DF antenna wouldn't be visible in this picture; the forward BDA antenna and the left side ER-142 antenna could be hidden behind the crew ladder.  Note the LAU-77A/A adapter on the outboard pylon (it is missing the DECM boom that would be on the A-6Bs) that was used to configure it to carry the Standard ARM missile

* The APS-107B was part of the Mod 0 Update. It allowed the employment of the AGM-78B/C/D missiles in addition to the AGM-78A. There was no external change from a modelers standpoint 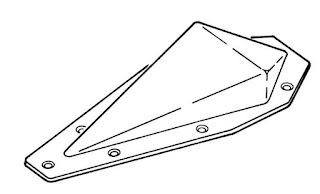 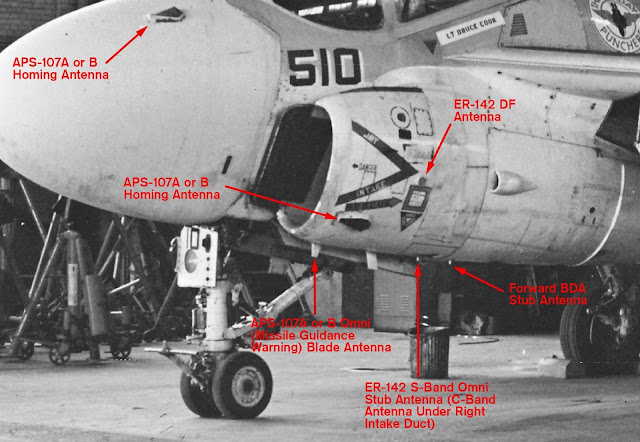 There was also an aft BDA stub antenna under the aft fuselage.

The combination of the wing and stabilizer-tip antennas provided 360-degree warning coverage. 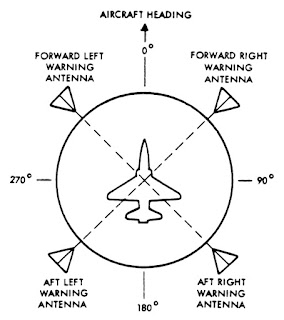 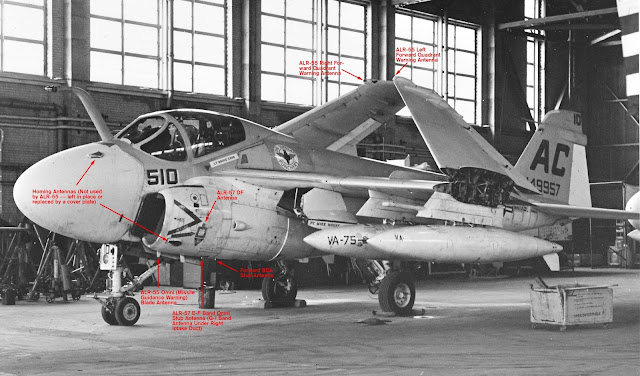 US Navy photo via Tony Thornborough annotated by Mick Roth

The system changes did not affect the external antenna configuration or location with the exception of the Mod O and O Update diamond antennas when the APS-107 system was replaced. These might have been left in place, removed and covered by a blanking plate, or in at least one instance, the engine nacelle antennas were left in place and a radome without antennas installed. 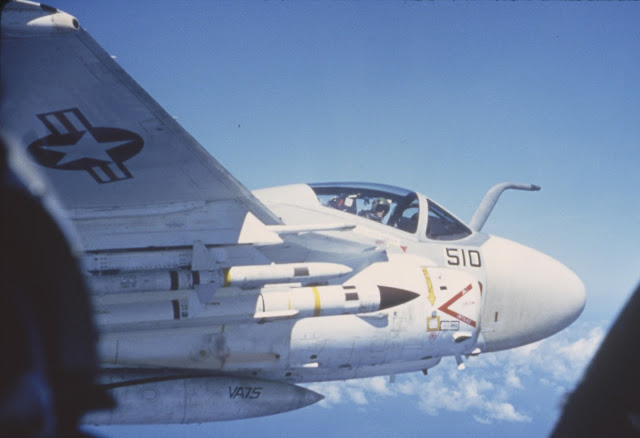 Here the antennas have been removed and covered with a blanking plate. 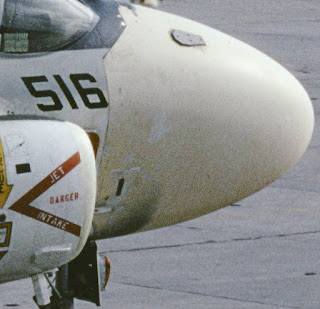 The most obvious difference between the Mod 0 cockpit and that of an A-6A bomber's was the addition of a row of threat warning lights at the top of the instrument panel, a radar warning instrument for both the pilot and the bombardier/navigator, and the replacement of the B/N's attack-radar control stick (that radar had been removed) with a missile control panel. 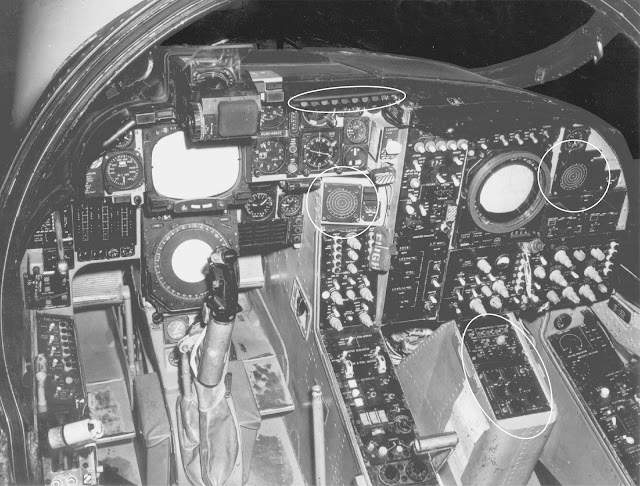 Mod 1: This version featured a radome festooned with small antennas and a rudder modified with even more that covered the aft quadrant: 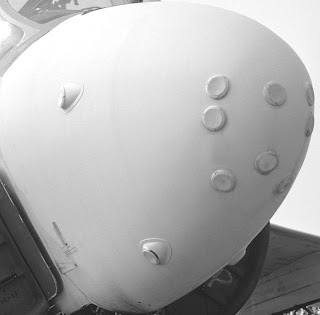 The bottom of the rudder was modified to add a bulge that terminated in a faceted antenna mount/fairing; the position light was raised up over it. 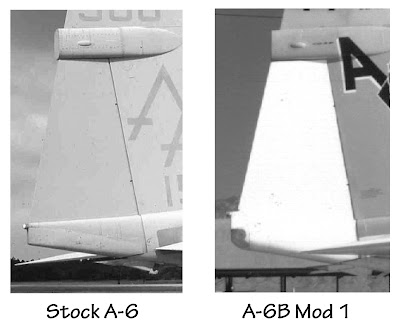 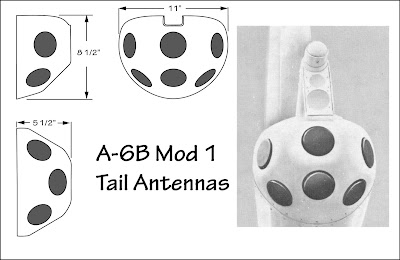 The Mod 1 had a different wingtip antenna mount/fairing with an aft antenna added to provide 360-degree coverage without the need for an antenna on the stabilator tip. 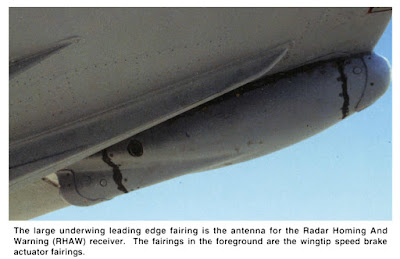 Photos from Squadron/Signal A-6 Walk Around, Mick Roth captions 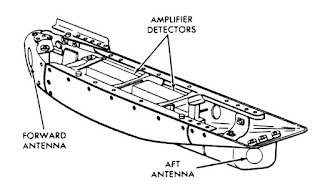 The B/N center console reverted back to one more similar to the standard A-6 bomber's, However, the hand controller (slew stick) was only used for Standard ARM and APS-118 functions since the APQ-112 attack radar had been removed from Mod 0 and Mod 1 A-6Bs. 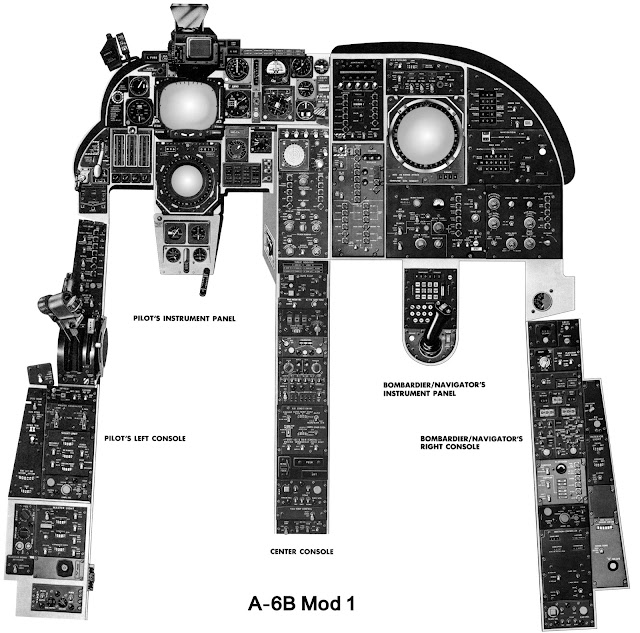 PAT/ARM: These final versions of the A-6B were only distinguishable from the basic A-6A by the BDA (Battle Damage Assessment) antennas that were retained. They also got back their all-weather attack radar capability. Only three were so modified: 155628/29/30

At some point after 1971, the A-6B ejection seats would have been changed from the GRU-5 to the GRU-7: 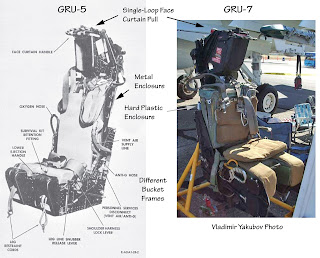 The major difference is the parachute housing, which changed from a metal "sugar scoop" to a plastic container.

Obscuro provides a 1/72 conversion for the A-6B Mod 1. See HERE. Unfortunately, it does not include the rudder modification but that's no hill for a stepper. Note that the pedestal provided was for the Mod 0 cockpit, not the Mod 1

AGM-78 missiles are available from Eduard in 1/72 and 1/48. They are also reportedly included in the Hasegawa 1/48th Weapon Set and F-4G Wild Weasel kit. A 1/32 AGM-78 is available from AMS Resins but you have to contact Harold directly.