The McDonnell F4H Phantom was delivered with unique external tanks, a big 600-gallon centerline tank and somewhat smaller but also bespoke 370-gallon wing tanks. The two General Electric J79s enabled it to lift a heavy load but required a lot of fuel, particularly in afterburner.

The 600-gallon tank with the "long" pylon fairing (which suggests that there was a short one; I don't know what it looks like yet): 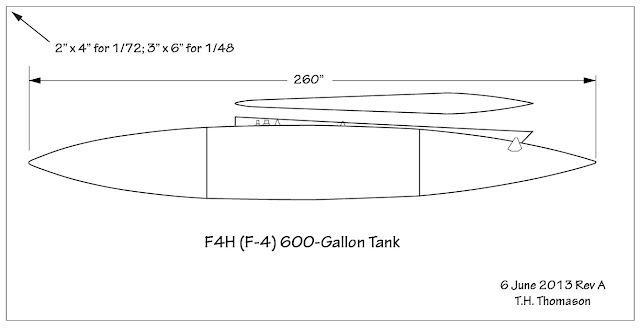 Forward is to the left. Note that there are two small brackets on the aft part of the tank mounted at a 45 degree angle to vertical. These functioned as sway braces (and probably insured that the tank departed cleanly when jettisoned) because when the tank was attached, they were set into brackets that were mounted on small access doors on the belly of the F-4. 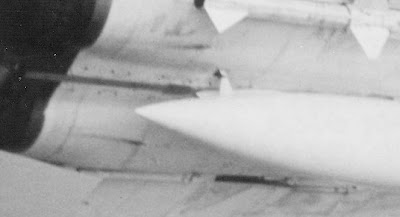 Craig Kaston provided this closeup of the aft sway brace (the hose provided the air to start the J79).

This Bill Spidle picture shows how little clearance that was between the 600-gallon tank and the fuselage.

There were supplier or at least design changes to the 600-gallon tank. (McDonnell short fairing, nestable, and welded; and Royal Jet are some of the configurations listed in the flight manual; the drawing above is the "welded" version) Note the flange on the lower left side of this one. I await comments and further information...

At some point, some operators of the F-4 (for example the USAF but not the Navy/USMC) adopted the F-15 610-gallon tank that did not have this aft sway brace arrangement and was not mounted at a nose-down angle.

The first 370-gallon tanks were provided by McDonnell. They can be distinguished from the subsequent Sargent Fletcher tanks by 1) the continuous increase and then decrease in cross section and 2) the flange on both sides of the tank where the upper and lower halves were connected together.

I'm pretty sure that this tank was 240 inches long and about 26 inches in diameter based on scaling a McDonnell stores drawing provided by Mark Nankivil. 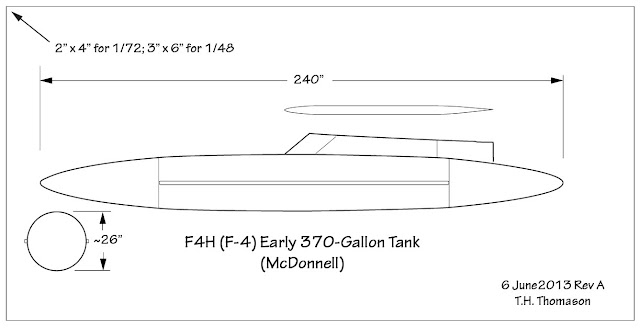 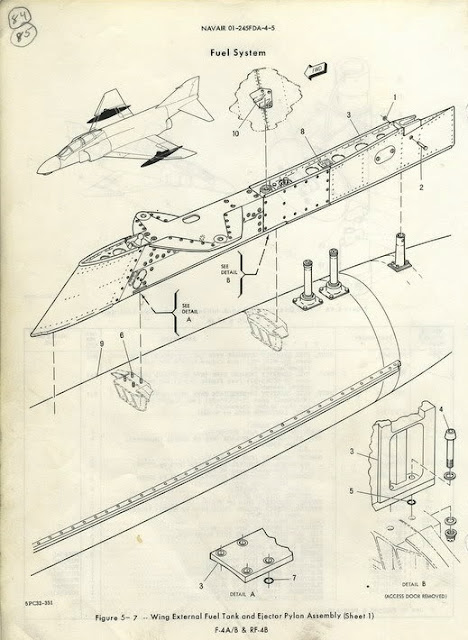 Installation of the tank on the pylon was obviously not as simple as hanging it and connecting the fuel and pressurization lines...

As you can see from the above picture and the following one, the forward mounting flange of the pylon was not symmetrical.

The reason was undoubtedly the need to transfer the weight of the tank directly into a wing spar, which was swept. Note that the outboard flange in the picture of the lower wing surface appears to be smaller than one in the illustration, possibly one of the differences associated with the later 370-gallon tank.

The later tank is distinguished by having a constant cross section for much of its length and only one flange, which was on the lower left side of the tank.

A view of the right side of the Sargent Fletcher tank, showing that there is no flange. (The line on the tank is a painted pin stripe.) 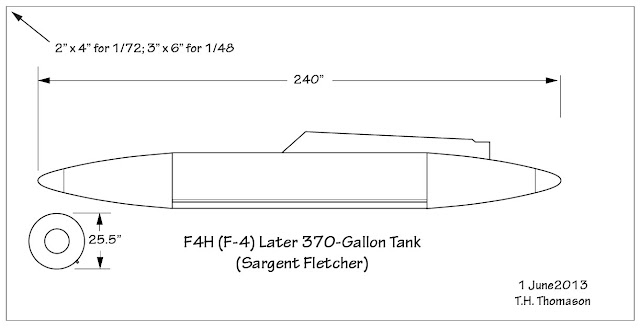 Craig Kaston provided the following picture of an installed Sargent Fletcher pylon/tank and noted that there was a gap between the pylon and the wing. 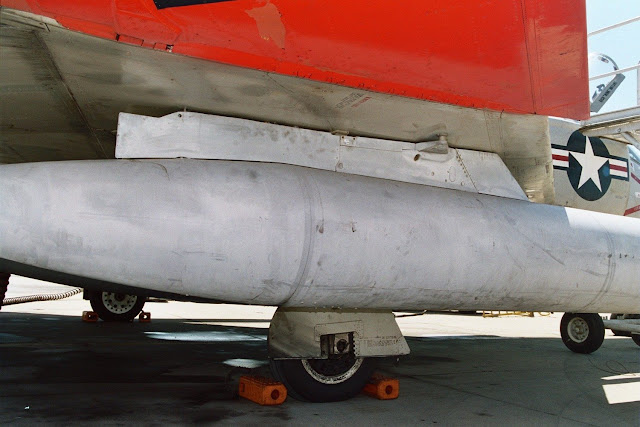 The McDonnell tanks were on the first operational F4Hs. I'm not sure when the changeover to the Sargent Fletcher tank was made, but I vaguely remember there being two different tanks while I was a flight test engineer for McDonnell in 1966. According to an illustration of Sargent Fletcher history, it began delivering F-4 tanks in the late 1960s, roughly corresponding to the changeover in production at McDonnell to the F-4J. Rex Droste reports that there are dated pictures of the McDonnell tanks being used as late as August 1974, at least on USMC F-4s. I'm sure that there was nothing fundamentally wrong with them other than they were probably more expensive than the Sargent Fletcher. As a result, they would have been used until they were no longer economical to repair.

Note: For a possible third version of the 370-gallon tank, see http://tailspintopics.blogspot.com/2014/02/f4hf-4-370-gallon-external-tank-redux.html