In October 1965, VA-25, which was flying A-1 Skyraiders from Midway, famously dropped a toilet during a close-air-support mission over South Vietnam. For more, see http://www.midwaysailor.com/midwayva25bomb/ 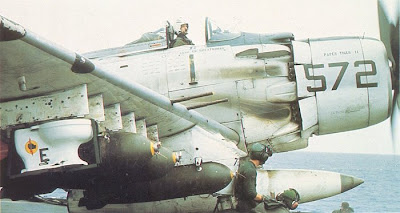 I was recently asked to identify one of the bombs carried on the mission that cannot be seen in the picture taken from the side. I naturally turned to my go-to guy for things under wings, Jim Rotramel. He recognized it at a glance, of course, as a 250-lb AN-M57A1. He also reported that the generally accepted identification of the other stores is incorrect. The two big bombs on the outboard pylons are not M117s but the similar looking, smaller, and somewhat lighter 500-lb AN-M64A1 with a conical tail. The store on the main wing pylon is generally identified as a cluster bomb dispenser, specifically an SUU-30 of some sort; Jim was sure that it wasn't but couldn't identify what it really was.

I looked more closely at the pictures available and did some analysis using Illustrator and the excellent drawings of the stores that Jim provided and finally came to the conclusion that it was actually another AN-M64A1 with the shape of the afterbody obscured by the red edge on the lower side of the inboard main landing gear door. No wonder Jim couldn't match it up with any CBU that he was aware of.

Mr. Skyraider, Ed Barthelmes, came through with a color slide that positively demonstrates that:

Note that Ed's Squadron/Signal Walk Around No. 27 on the A-1 Skyraider, written with Richard Dann, is one of best references for this venerable airplane.

The load out on the left side is presumably a mirror image of the one on the right side except for the toilet, of course. 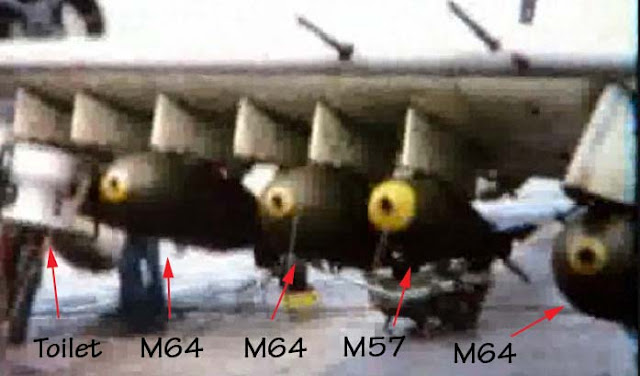 Based on drawings provided by Jim: 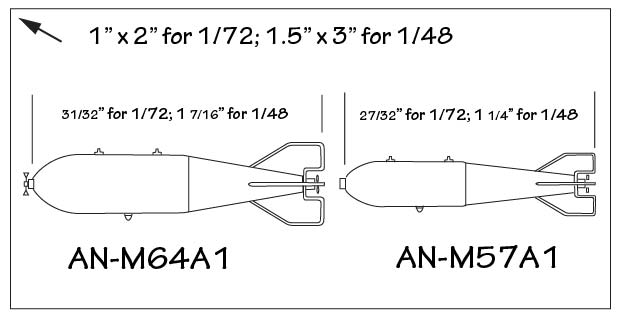 Note that the bombs in the illustration above have the fins in the + orientation; the tail cones of the bombs on the airplane have been rotated to the x position.

There are a few different kits and aftermarket toilets available for this particular aircraft; see http://www.midwaysailor.com/midwayva25bomb/. As far as I can tell, none have the correct stores configuration depicted, much less included, and none include the red tail on the toilet. 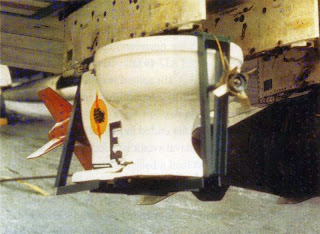 From the Midway Sailor web site
A side view of the store showing its position on the pylon and the size of the tail: 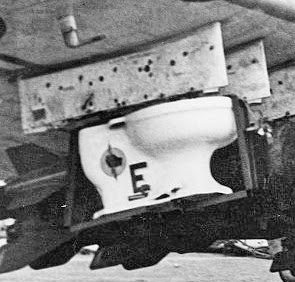