20 December 2017: The main problem with the Matchbox 1/72 F9F-4/5 vertical fin is too abrupt a transition between the upper aft fuselage and the vertical fin as shown in this Ed Boyd picture of his model. 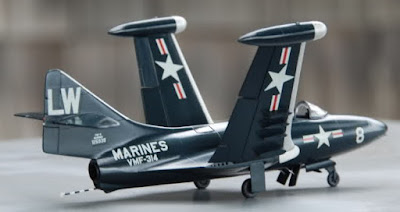 Smoothing the transition and shaping the bottom of the fin aft of the tailpipe would be relatively easy. 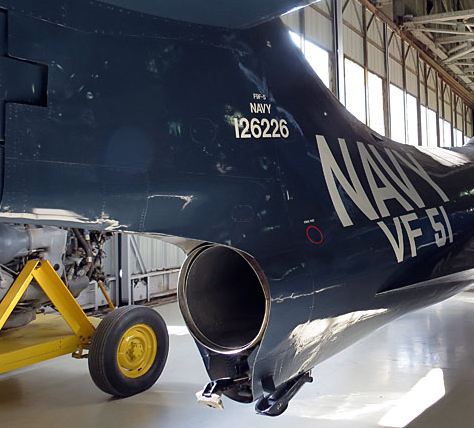 2 December 2017: For a discussion of the small difference between the F9F-2 and -5 wing and wing-to-fuselage fairing, see https://tailspintopics.blogspot.com/2017/12/grumman.html

Another work in progress for which there was a lot of existing material. This one describes the differences between the -2 and -5 Panther, since there are -2s in 1/72 (the Matchbox -5 is not so good) and a -2 and -5 from different kit manufacturers in 1/48. Click Here for my thoughts on the 1/72 scale -2 kits.

There were three notable shape changes between the -2/3 and the -4/5: the fuselage was stretched by eight inches between the inlet fairing and the dive brakes; the vertical fin was revised (a bit differently than shown here); and the wing leading edge just outboard of the engine inlet was bulged forward with a small flow fence added (the fence was added after initial -5 production and retrofitted to -2/3s so it alone is not a distinguishing feature although the -2/3 fence is a slightly different shape). The -5 also had a small suck-in door behind the bigger one that was on the -2.

You have to do some rivet counting to see where the stretch is but it's there. Note also that the fiberglass reinforcement on the aft part of the canopy is wider on the -5, but this appears to have been retrofitted to the -2, so its absence denotes a -2 but its presence does not necessarily denote a -5. 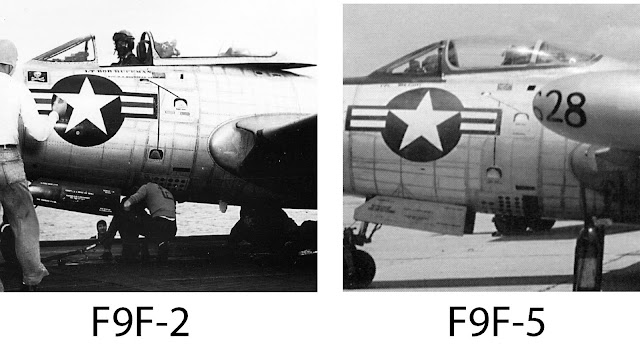 The tail change is a bit subtler than shown on the illustration above. It was actually enlarged all around as depicted here and the -5 trailing edge was 2.75 inches farther aft. 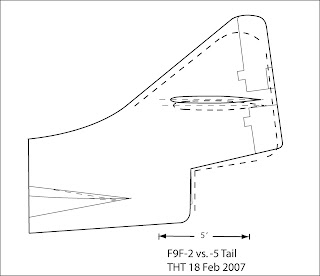 Regrettably, the difference in the shape of the bottom of either fin isn't shown but the following illustration will make up for that. Note that there is also a difference in the gap between the -2 and -5 upper and lower rudders: the -5 gap was rectangular; the -2's was more triangular. 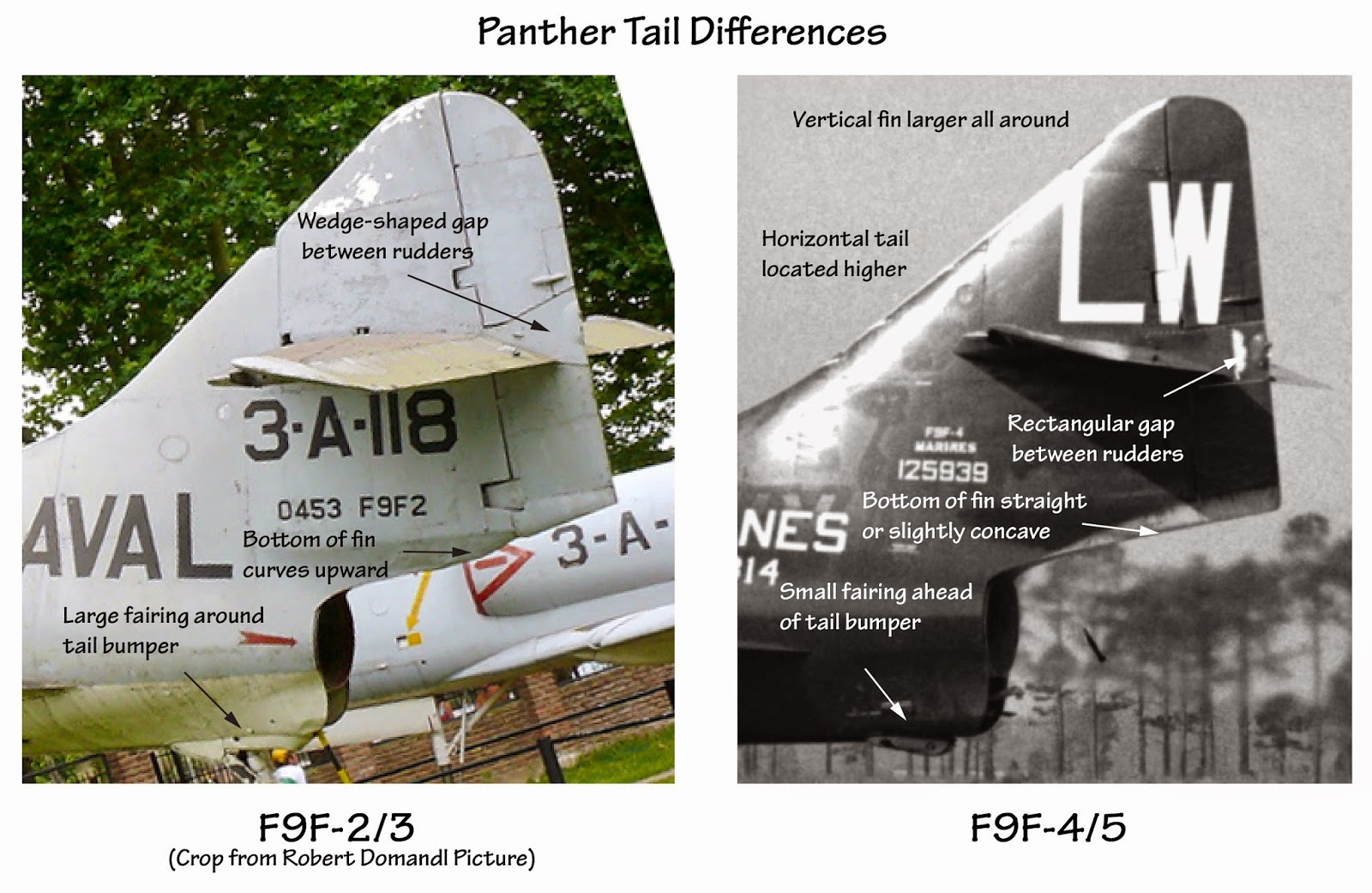 This is another view of the bottom of  the -2's fin:

Other -5 differences are the tail bumper (more on that below), larger stores pylons on the wing, and the configuration of a small "reverse flap" on the wing flap of -5 (See Yves Marino's comment below). On some -5s, the lower aft corner of the larger suck-in door is cut off to clear the engine inlet.

The cockpit was slightly different. The forward end of -2/3 side consoles was stepped up whereas the -4/5 consoles were flat.

Since I limit myself to 1/72nd scale, I don't know anything about 1/48th kits other than what I read on modeling websites. In this case, Pip Moss has measured the Trumpeter -2 and Monogram -5 fuselages and reports that the Trumpeter F9F-2/3 is 9.375 inches long along the waterline (37' 6") and the Monogram F9F-5 is 9.625 inches long (38' 6"). That means that they are one scale foot different in length (a bit more than the actual 10.75 inches but the difference is approximately 1/32 inch, which is easily attributable to measurement accuracy), and both are a bit short but by less than 1/8 inch. On the other hand, Lewin Jones and others have measured the Hobbycraft (same mold as the Trumpeter kit) -2/3 and Monogram -5 and found them to be the same length, which means the Hobbycraft/Trumpeter fuselage is too long. Use the following illustrations to check for yourself. 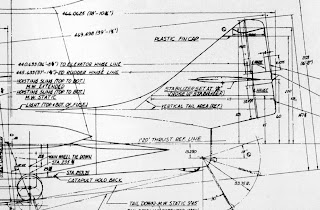 One problem with the Hobbycraft/Trumpeter F9F-2/3 is the canopy.  See Michael Benolkin's review Here and Tom Cleaver's Here. Click Here for a description of an aftermarket substitute for the canopy and Here for a source for it.