Jodie Peeler is back with an inbox evaluation of Airfix's fresh redo of the Sea King for its potential to be converted to a U.S. Navy SH-3. Note that this kit is different in detail and vastly superior to the original, relatively crude Sea Kings from Airfix. The first issue, the HC.4 Commando, featured the stub landing gear, while the sponson-equipped HAR.3 is the subject of the second release. This is the box art you'd be looking for: 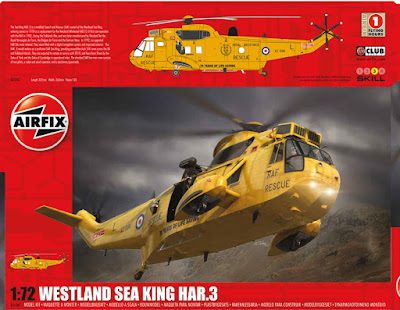 My quick notion, having worked with it this afternoon: it's the best Sea King in 1:72 I've yet found, and converting it to an SH-3 is going to be easier with it than with any other kit. Airfix has given us a winner.

The kit itself is sharply molded and shows intelligent breakdown and satisfying molded detail. There is no representation of rivets, but panel lines are recessed and nicely defined. The parts are molded in a slightly soft gray plastic that cuts easily, and they are detailed enough inside and out to satisfy most builders. In quick test-fitting, the kit shows the hallmarks of the new-tool kits Airfix gives us these days: the parts go together beautifully and not much filler should be needed, if at all.

This kit is as far removed from the old Airfix Sea King as you can imagine. The HAR.3 has five gray parts trees and one clear parts tree. Certain parts with windows, such as the big starboard side door, are molded in clear plastic. The cockpit greenhouse is made up of three clear parts with appropriately delicate framing - a far cry from the big, clunky cockpit cab of the old kit. 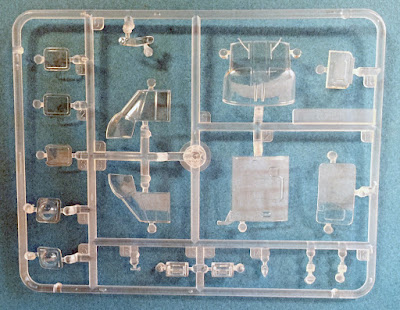 The mushy intakes of the old kit are replaced by sharply rendered individual intake pieces and there's even an ice/spray shield. 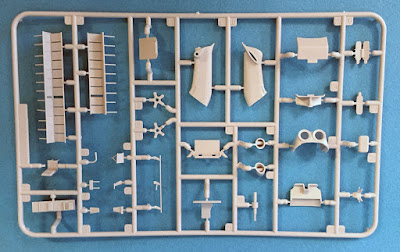 Since the kit is based on a Sea King in modern configuration, it includes a lot of features that may need to be removed depending on your intentions. These features include a prominent doubler at the cabin/tail fuselage join, a long strake along the port fuselage aft, and several other raised features. As a Westland-built aircraft, it also includes the bulge on the port fuselage beneath the rotor head; unlike the Cyber-Hobby kit, this is molded in and will need to be ground off, filled, and a couple of panel lines rescribed. For an SH-3, you'll also need to fill in the observers' windows in the aft fuselage and the forward cabin window to port. On the other hand, in places where Cyber-Hobby molded several open mounting holes that need to be filled, Airfix has recesses on the inside of the fuselage where you can drill through as needed, which is much more thoughtful. 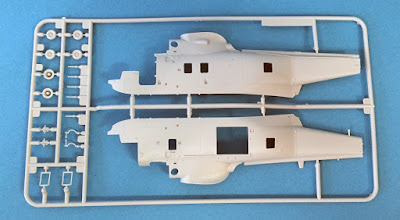 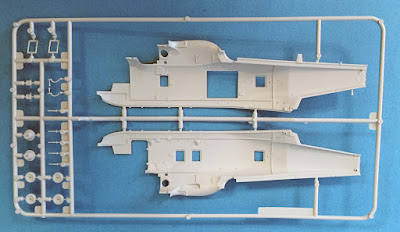 The well in the lower fuselage is molded with a cover in place, so that will need to be opened for an SH-3. Actually, the entire lower fuselage piece will need surgery to remove molded-in features and plug some mounting holes; fortunately, the plastic cuts easily, and most of these parts can be shaved right off with only a little finish sanding needed. None of the features of American SH-3s are included in the kit's components, or on the parts trees, so you'll have to scrounge up or scratchbuild the fairing beneath the cockpit and the ADF fairing on the tail. There are also no weapons shackles or mounting points, so you'll have to get creative there.

Like the Revell-Germany kit, the Airfix kit comes with composite rotor blades, which retain a constant chord until an abrupt taper at the root end. 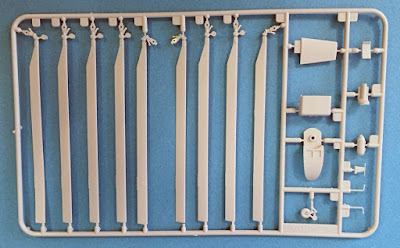 It would not be difficult to modify them into metal blades through careful cutting and sanding, but if you want an easier route, replace them with blades from a Cyber-Hobby or Fujimi kit 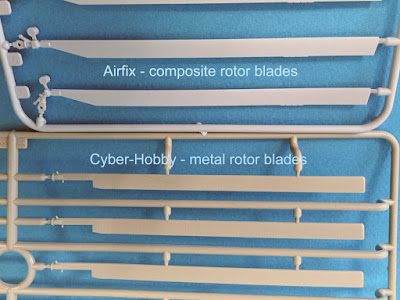 On the other hand, Airfix provides both five and six-blade tail rotors. You also get options for a folded tail and stowed main rotor blades, although the outboard blades may need a little adjustment to sit at the proper down and out angle when stowed. The rotor head is a little bare and will benefit from some detailing.

The interior is okay for the kit subject's purposes, but as the basis for an SH-3, it'll need help. You'll have to come up with your own equipment racks and sonar array. However, the sling seats are nice (slice a four-seat section off and you're all set for a recovery helicopter's guest seating) and the cabin floor is the most detailed I've yet seen. The "broom closet" is included for behind the cockpit. No internal cabin structure is represented, but there's actually a cabin ceiling piece! 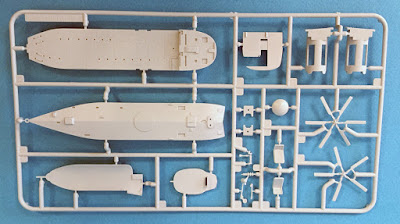 The cockpit itself isn't elaborate, but the basics are correct (and unlike the Cyber-Hobby kit, the collectives are on the correct side in both pilot positions). The seats may need to be modified for an SH-3; during my build I will examine some options there.

Where does it stack up with the other worthwhile Sea King kits in 1:72? Fujimi's kit is plentiful and offers many variants, but as a 35-year-old kit it is basic in many ways and doesn't seem to capture the Sea King's shape anywhere as well as the Airfix kit.

The issues with the Cyber-Hobby SH-3 kits have been documented elsewhere, including my build report from 2013 (see http://tailspintopics.blogspot.com/2013/04/cyber-hobby-sh-3d-build-by-jodie-peeler.html). Having worked on them both, it's my belief that converting the new Airfix kit into an SH-3 is much easier than salvaging the Cyber-Hobby SH-3, which itself is more Westland than Sikorsky. Both kits need some of the same additions to become SH-3s, but the Airfix kit is much less trouble to convert, more user-friendly to build, and is around half the price of the Cyber-Hobby kit.

The Airfix kit compares most directly to the 2000-era Revell-Germany Sea King kits, which also depicted Westland-built aircraft with composite rotor blades. Revell's otherwise lovely Sea King is undone by its anemic sponsons (about 20% underscale). As with the new Airfix kit, you must also deal with removing molded-in features and scrounging up the bits that Sikorsky used but Westland didn't. In a choice between the two, the Airfix kit gets the nod for several reasons, notably its more in-scale sponsons. 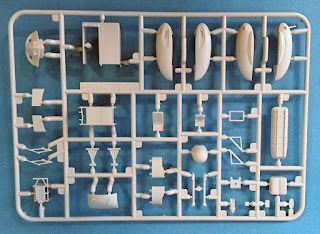 Although Airfix could well surprise us with a dedicated SH-3/HSS-2 down the road, the breakdown of this kit indicates all Airfix Sea Kings will likely be Westland variants. That, however, is no real cause for concern to me because the basic kit looks terrific. It looks more like a Sea King than any other 1:72 kit I've seen, and given the ease of assembly that has become a hallmark of new Airfix kits, it should be an enjoyable build. I plan to document mine and share the results here.
Posted by Tailspin at 12:26 PM