The instructions call for an overall exterior color of "Flat Non Specular Intermed. Blue". It should be the darker gloss (weathered as appropriate) Sea Blue.

23 August 2019 Updates/corrections already? Yes: I've corrected the Suez markings discussion and added some more detail on the AEW.1 represented by the kit decals based on input from "71Chally" who posts on Britmodeler and also provided this AEW.1-related link: http://skyraider.org/skyassn/memberpics/cowell/cowell.htm

Changed paragraphs are preceded by "&". 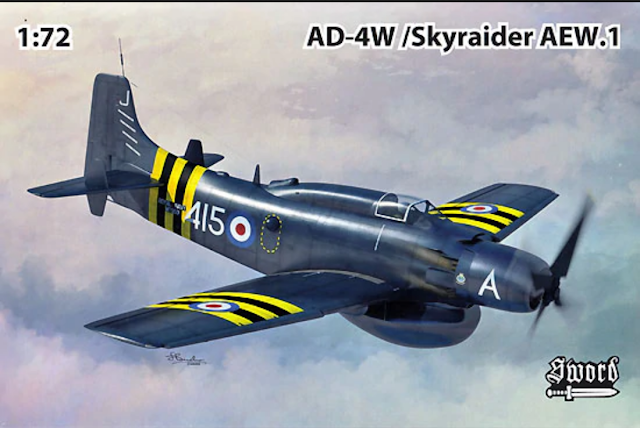 This review is a work in progress but if the fit of the parts is as good as their appearance, this is an excellent kit. There is hope for that based on pictures provided by Sword of an assembled kit: 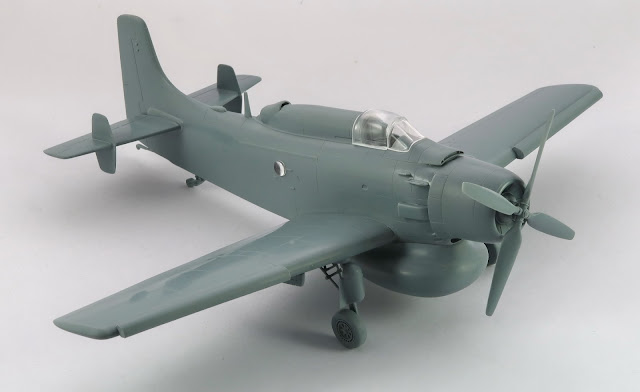 For a quick look at the AD-4W, see https://tailspintopics.blogspot.com/2018/06/ad-4w-skyraider.html

X Notable early impressions out of the box: crisp molding, excellent surface detail, scale thickness of small parts where possible, undercuts for realistic openings (e.g. the engine exhaust stacks), etc. One particularly appreciated feature is the trailing edges of the ailerons and flaps are molded to a sharp edge on the upper wing (but unfortunately not the same for the rudder). Decals are by Techmod: they appear to be thin and in perfect register. Markings are provided for a Royal Navy AEW.1 during the 1956  Suez conflict, a VC-11 AD-4W flying from Boxer in 1952, and VC-12 AD-4W assigned to the Coral Sea air group in 1950.

Don't let the following notes deter you from buying this kit. For one thing, most relate to comments on and errors in the instructions, not the kit itself (more to follow on that in a week or two). For another, the success of this kit, meaning Sword sells as many as they can produce in as short a time as possible, will make it much more likely that they continue to exist and issue subjects in 1/72 scale that other manufacturers have ignored.

& First the box art: On Britmodeler, Dave Fleming reported that this AEW.1was flying from Eagle, not Albion (the A is for A flight of 849 squadron). He also noted that the blue in the roundel is a thorny issue because it appears to be lighter on some aircraft. 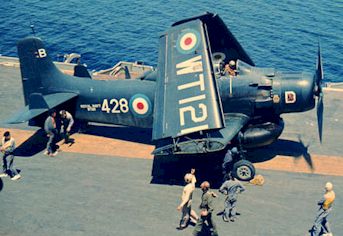 & This excellent picture of an AEW.1 with Suez crisis marking is via Martin Grant:

Y & Note that access panels aft of the cowl flaps has been removed, the aircraft does not have the big HF antenna on the vertical fin (it was replaced by a smaller one for BuNos 125765-127961 along with a different attachment point on the fin for the wire antenna: see https://tailhooktopics.blogspot.com/2019/11/douglas-ad-4waew1-antenna-configurations.html for a complete description of the various antenna suites by BuNo and RN serial number).

& The art is correct in showing that the stripes do not extend forward onto the fixed slats as shown in the marking diagrams in the multi-page instruction sheet. There were no angle of attack stripes on the right side of the vertical fin as shown on the box art because the LSO would only be able to see ones on the left side (see https://thanlont.blogspot.com/2009/12/reason-for-those-lines-on-vertical-fin.html). Also the placement of the data on the aft fuselage is different in this screen shot of this particular aircraft, not to mention the positions of the roundel and side number are reversed compared to the color photo above (which is an AEW.1 from the same detachment and time period as the one represented by the markings drawing and box art!). 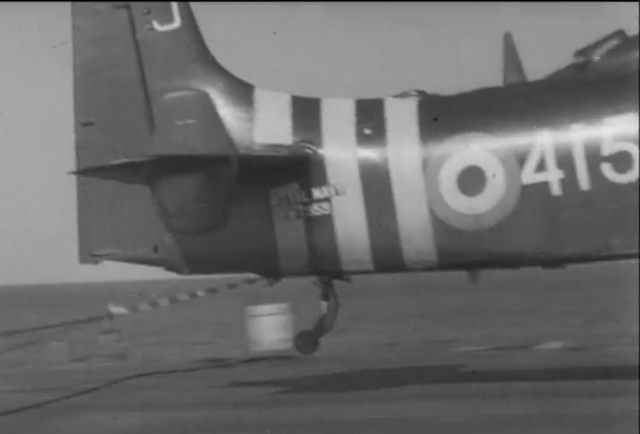 Note that the "A" for A flight on the cowling appears to be smaller and positioned farther aft than the one on the kit markings diagram and there is "15" on the landing gear fairings.

! The jury is still out on whether the yellow stripes on the aft fuselage and the upper wings are separated by black stripes (see color picture above). However, the stripes were to be one foot wide on single-engine airplanes.  No stripe decals are provided in the kit.

Step 1 in the instructions shows the assembly of the four-part tail landing gear well. The positioning and attachment of the landing gear itself (part 4) looks iffy as there are two small divots in the upper side of the wheel well that don't correspond to two pins on the top of the part 4. I plan to drill a hole equal to the diameter of pin between part 4 and the sprue, cutting it off the sprue so as to maximize its length, and install it after assembly of the well in the fuselage to be sure that it is secure and correctly located.

Step 2 is assembly of the cockpit, which is more than adequate in detail given the thickness of the canopy. In fact, it is so good that substituting a vacuformed one that is slid back is tempting (it might just be possible to trim the inner side of the bottom of the injection-molded canopy so it can positioned open). The seat isn't a bucket as it should be but with the addition of a back pad and straps, it is adequate.

Step 4 shows the addition of clear windows to the doors to the lower rear compartment. Although both the clear part and the opening appear to be beveled and therefore more likely to stay in place during masking and mask removal when attached with the right glue, there is a possibility on one or both coming loose and becoming lost in the interior. One option is to back them with black painted plastic as if the blackout curtains are drawn (there's no detail back there and even if there was, most wouldn't be visible if one went to the trouble of cutting out the doors). Another is to use one of the liquid products to create a window after painting is complete.

Y Note that the early AD-4Ws had flush windows in the aft compartment doors; Ed Barthelmes' best guess is that BuNo 124761 and subsequent had bulged windows (note that some AEW.1s had earlier BuNos and therefore flush windows). Bulged windows are not provided in the kit. 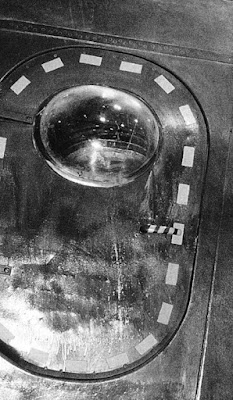 Step 6 provides two alternatives, closing off the cowl opening with part 19 (see the Skyraider nose flaps discussion here: https://tailspintopics.blogspot.com/2011/10/ad-skyraider-modeling-notes.html ) or using the resin R-3350 engine included. Note that there is no representation of the opened nose flaps.

Some might not find the propeller provided to have the proper blade taper. The Monogram A-1E prop is an alternative but there are others.

Step 7 involves the installation of the fins on the horizontal stabilizer. Unfortunately, both the front view provided and the arrows would have you place them too far inboard. They actually go on the narrow raised chord-wise stripe (although I don't think there is one present on the actual stabilizer).

Note that they should also angle three degrees to the left as does much of the vertical fin and rudder (see the link in the step 6 discussion above) but in my opinion that's not worth the effort to effect (at least in 1/72, only the Airfix Skyraider has an accurate representation of the vertical fin but it is so little known that at least one modeler went to the trouble of taking out the twist).

The horizontal stabilizers are handed as differentiated by the mounting pips. The difference is the rectangular panels on the lower surface.

This step shows the vertical fin without the prominent HF antenna depicted on the box art (it would normally be added as part of the final completion after painting) that was on BuNos 124076 through 124777. According to Sword, their current mold capability does not allow them to make a small part shaped like that (there is an unnumbered part on the wings sprue that looks like an attempt to do so. However, a short length of insulated wire with the insulation partially removed would make a suitable part: 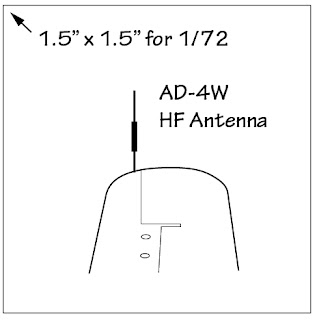 There was also a wire antenna leading from the tip of vertical fin to the right rear side of the fairing aft of the cockpit.

& Step 11: Ed Barthelmes, my Skyraider subject matter expert, noted that the wing tip position lights are not provided by the kit.

Step 12 would have you install the pitot (part 68) on the bottom of the wrong wing. 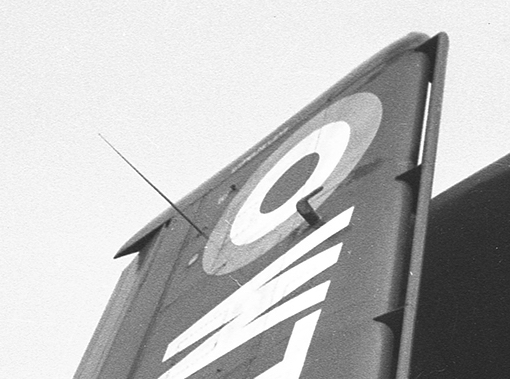 Note the rod antenna on this wing. There appear to be two on the underside of the left wing on at least some airplanes (see shadows on this first picture taken from below and aft). 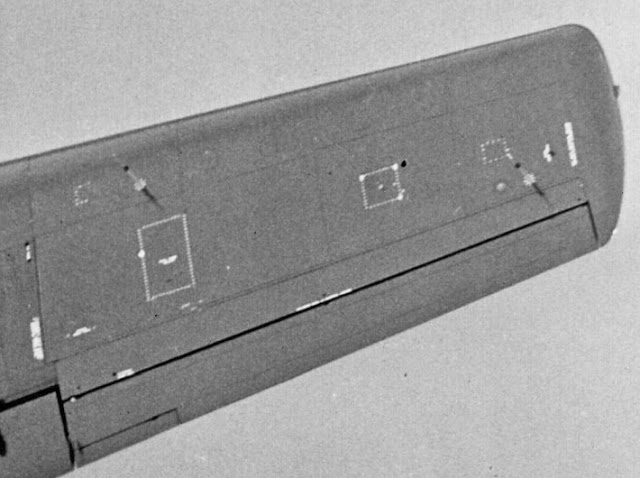 Parts 60 and 61 are catapult hooks that go on the landing gear struts as shown in step 14. There is a small indentation on each of the struts (parts 3 and 7) as a guide to their placement. However, it is important to note that the struts are handed and to also take into account the placement of the hooks relative to the alternative landing gear doors 16 and 20 that are shown in step 17. This is the hook (note that it is angled downward and inward) and door on the left hand landing gear. 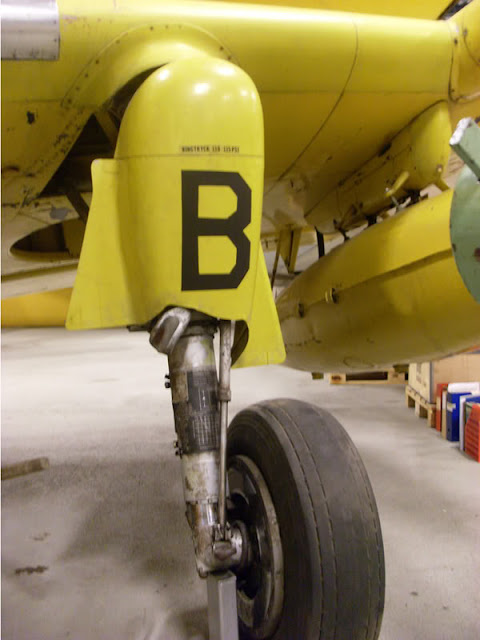 It is also important to mount the landing gear wheels with the brake pucks correctly located aft of the strut as shown in step 18.

Y! Although it's not obvious, steps 16 and 17 show different landing gear door options. All AD-3Ws and AD-4W BuNos 124076-124127 had a fixed fairing covering the gear rotation knuckle and no fairing attached to the landing gear strut. Note that they are handed with a notch for the telescoping mechanism (parts 53 and 54) shown added in step 17. These are represented by parts 48 and 49. AD-4W BuNos 124761 and subsequent had a smaller fixed fairing and a large one attached to the landing gear strut similar to the ones on the AD-1. The ones on the strut are parts 16 and 20. Note that they are also handed to clear the telescoping mechanism and the catapult hooks moved from the fuselage to the landing gear on the AEW ADs and all AD-5s. In any event, 48/49 and 16/20 are probably best installed in step 18 after the landing gear struts are in place along with the drag links (parts 51 and 52). 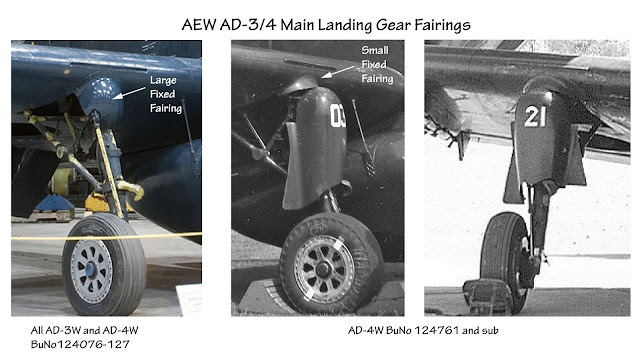 Also note the stall strip that was mounted on the leading edge of the right wing only above the landing gear that will have to be made from stretched sprue.

! I plan to change the landing gear assembly order to first put on the struts (parts 3 and 7: note that they are handed) along with the drag links (parts 51 and 52 in step 18). Note that the upper/aft end of the latter will sit on support tabs provided on the aft side of the forward landing gear well but exactly where the lower/forward ends should be glued to the strut itself is not obvious but will be dictated by getting the proper slight forward rake of the strut. Then I'll add the telescoping mechanism and the selected gear door.

Step 18 is also where you install the radome. Note that there were three small support rods, one to the fuselage ahead of the oil cooler intake and one to each wing, that are not included. 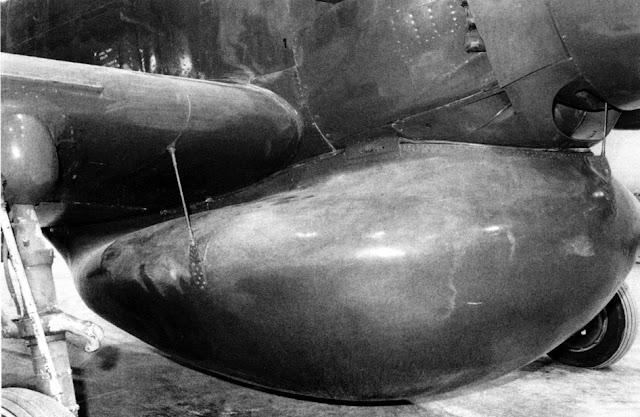