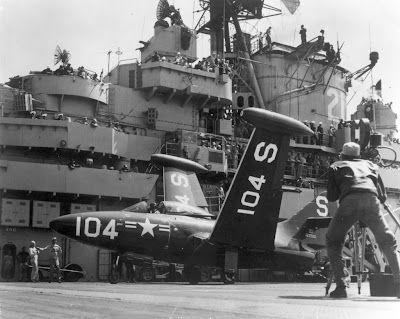 The only notable differences that I know of between the Grumman F9F-2 and -3 is that 1) the -2 was powered by a P&W J42 engine and the -3, an Allison J33 and 2) the -3 with the J33 engine was never modified to carry bombs or rockets as the -2 was. The -3 was delivered first, to VF-51 to replace their FJ-1s. The picture above was taken during carrier qualifications aboard Boxer. Only 54 F9F-3s were produced; most had the J42s substituted for the lower-thrust J33s and were redesignated as -2s. According to Baugher (http://www.joebaugher.com/navy_fighters/f9_3.html), the changeover was accomplished in October 1949.

In any event, the stores pylons should not be used; the J33-powered F9F-3 were never modified to carry rockets as shown on the box art like the -2s were.
Posted by Tailspin at 6:19 AM