Note: I've revised this entry in response to a lengthy comment that I have not posted because it contained minor errors, some of which were the result of my less than crystal clear statements in the original and verbally hand-waving the location of the exterior angle-of-attack indicator lights on the A4D-2N and subsequent. Since I'm not sure that I can delete a personal email address in a comment before posting it and some people may not want their email address made public, if someone wants a personal response to their question/comment, feel free to email me at tommythomason@sbcglobal.net 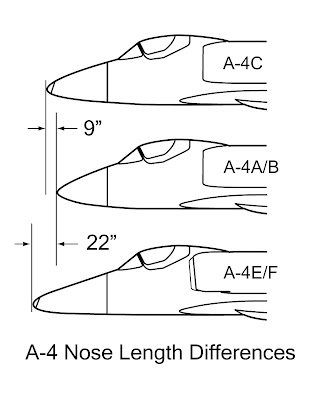 The A4D-2N (A-4C) nose was lengthened to accommodate a terrain avoidance radar and an access door added on the right side. It was originally produced with a large dark radome. The pitot that was located in front of the windscreen was moved to the left and a total temperature   added to its right. 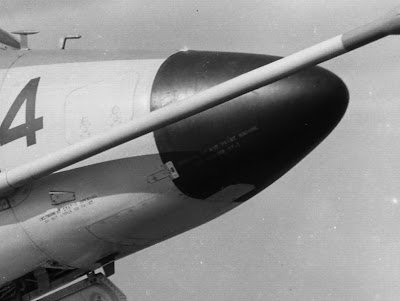 For some reason, probably to reduce weight or improve avionics access, the original A4D-2N nose was modified to replace the large dark radome with one shaped the same but possibly made of different material. The area defined by a paint or a erosion resistant coating was smaller, usually with a distinctive slant. The change roughly corresponded to the designation change to A-4C in 1962. However, large dark radomes are seen on deployed A-4s through at least 1965 that had not yet been through overhaul after the change was implemented.


(For an update on the radome story see http://tailspintopics.blogspot.com/2012/10/skyhawk-details.html) 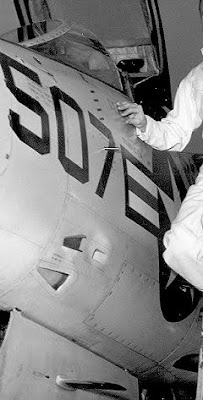 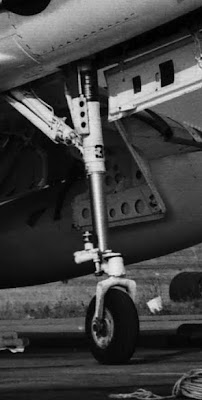 On the A4D-2N, it was a large weather vane as shown here. (Note also the replacement radome that has not yet been painted to match the forward fuselage.) 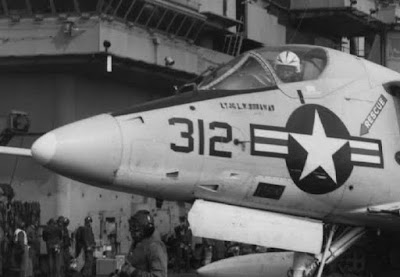 The three-light external display was relocated from the nosewheel strut to the left wing's inboard leading edge. In the following picture, it is the dark window on the wing leading edge just above and on the inboard side of the forward end of the main landing gear fairing. 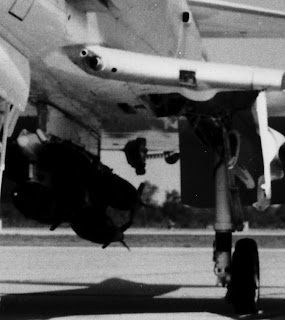 Another difference between the A4D-2 and the -2N initially was the radar altimeter, located in a pod under the left wing. It was added during A4D-2N production and retrofitted to A4D-2Ns and some A4D-2s.

Above cropped from a Bill Spidle picture. 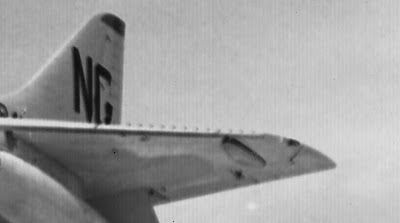 For some background on the use of red over time to identify crush-point danger, see http://tailspintopics.blogspot.com/2012/10/painting-crush-points-red.html
Posted by Tailspin at 12:44 PM