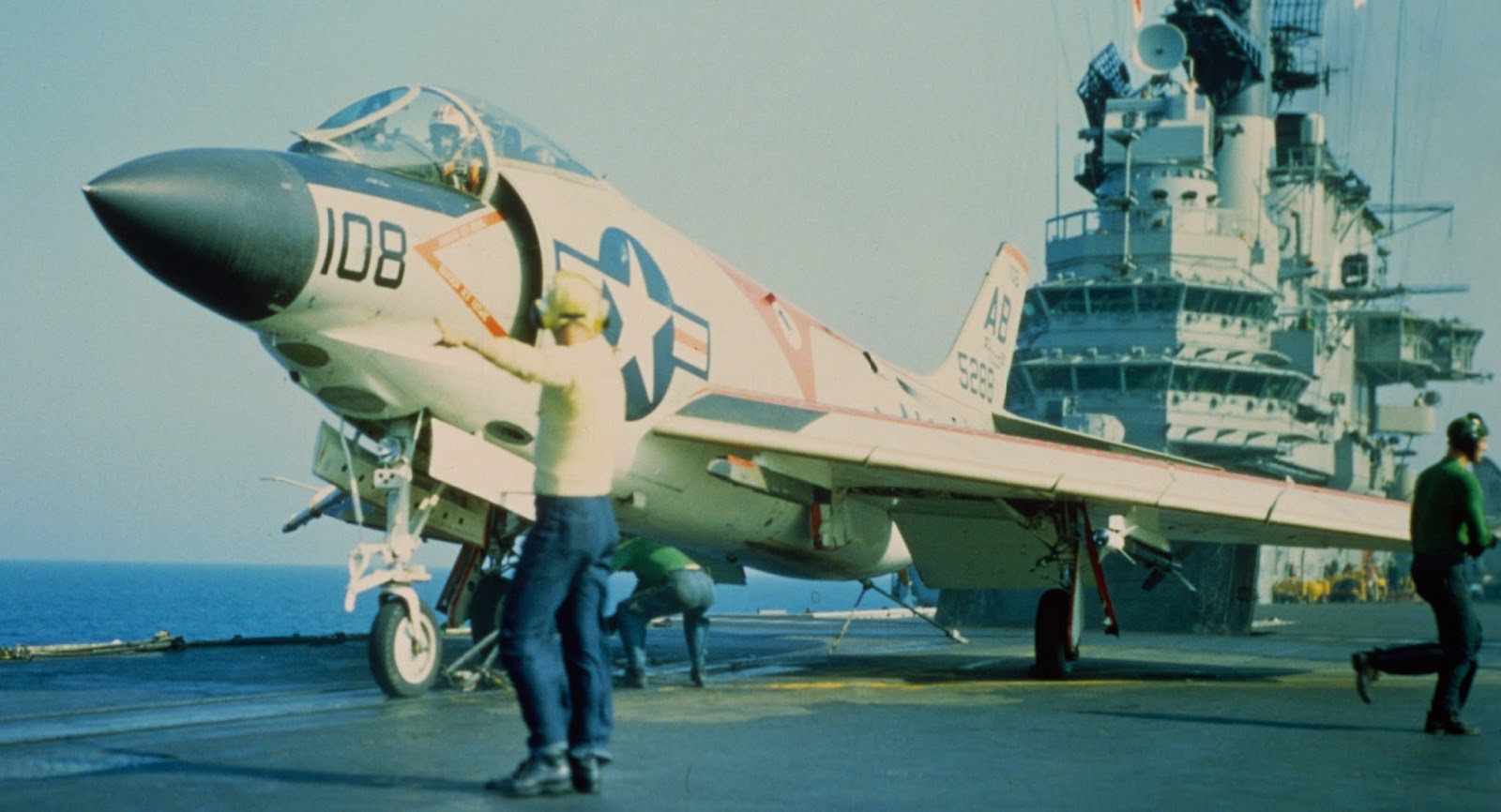 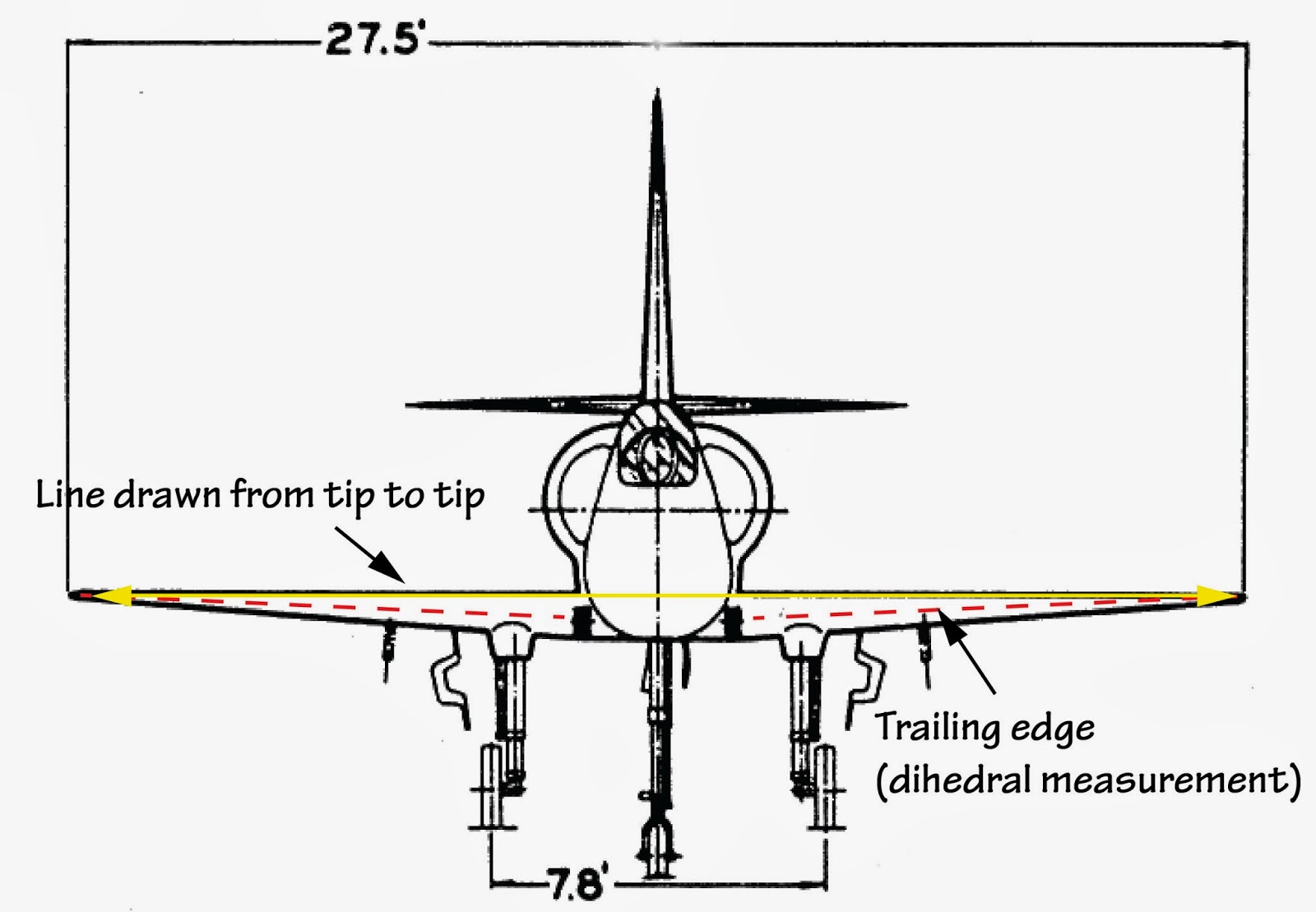 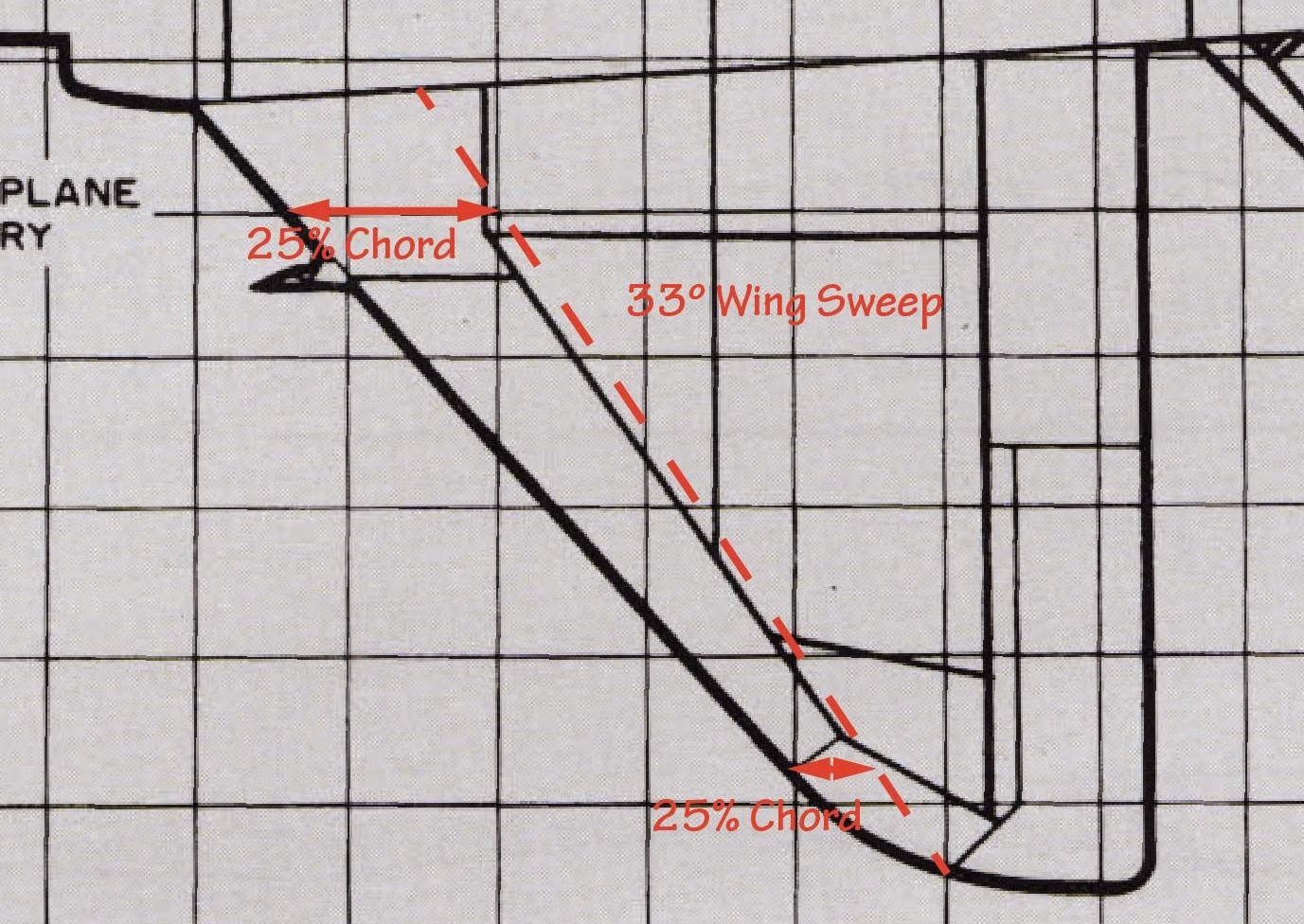 It's no surprise to me that model kit manufacturers get things "wrong". Between the bum information in publications and on the interweb, the reliance on warbirds and museum articles, and the number of configuration modifications that occur during production and afterwards, it's a wonder that they get as much right as they do.

An example is the F4U-4 Corsair, which at a glance doesn't look all that much different from the -1 series. And in fact it was the same as a late production F4U-1D from the firewall aft, except for the cockpit. And the F4U-1D was pretty much the same as the later F4U-1s referred to as F4U-1As. (The 1C was cannon armed, but that was its only notable characteristic.) However, the -4 was essentially all new from the firewall forward and so was its cockpit. And then there were the changes made during the production of 2,356 (or maybe 2,357*) airplanes. Not to mention that the cannon-armed version was initially designed F4U-4C, which was then changed early on to F4U-4B (see http://thanlont.blogspot.com/2014/03/navy-aircraft-designation-suffixes-redux.html)

The -4 was to take advantage of the increase in power available from the new P&W R-2800 "C" engine. The most obvious external change in the engine was the replacement of the cast one-piece gearbox with two castings bolted together. 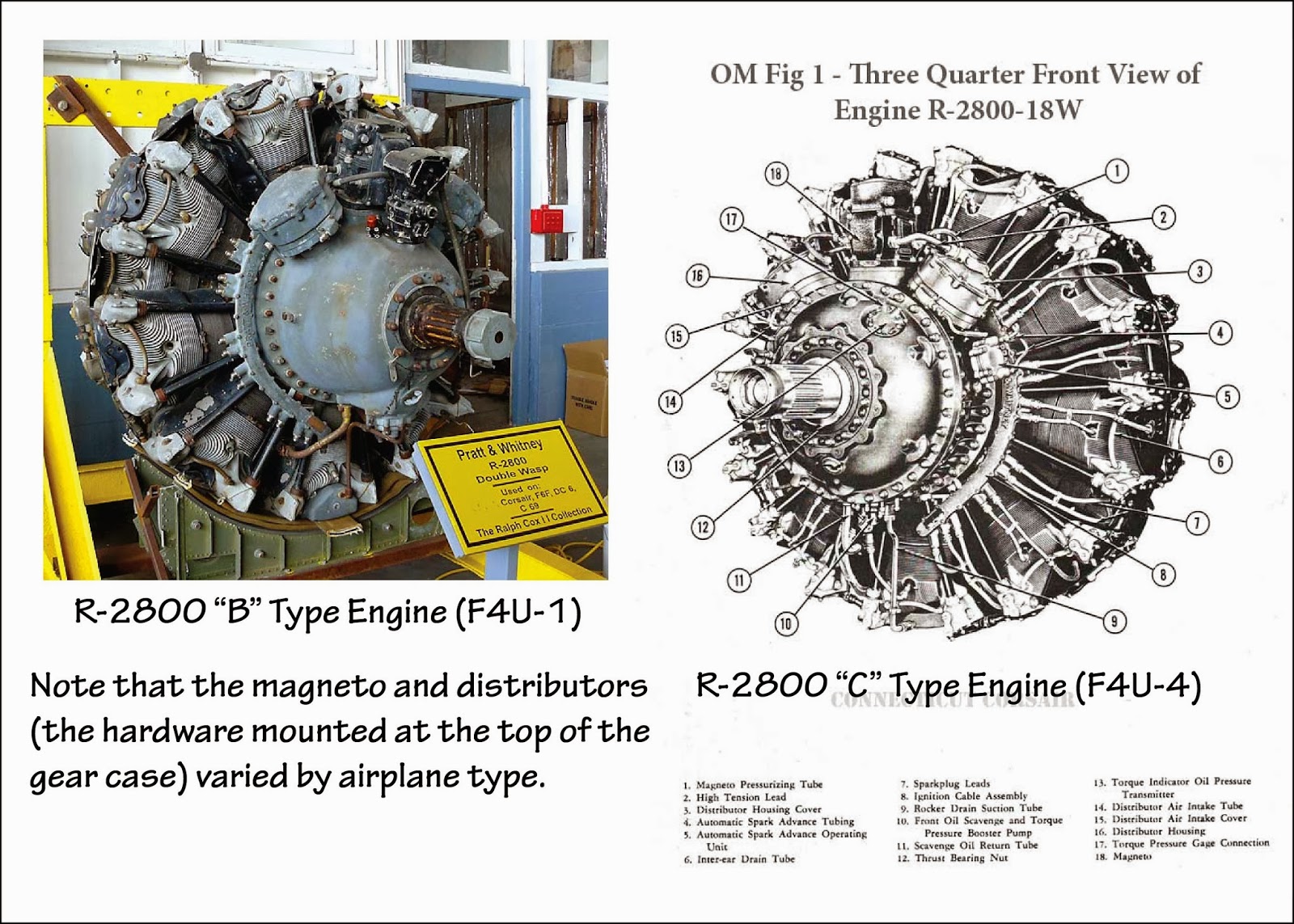 The additional power was absorbed by a 13' 1" (or 2" according to the F4U-4 SAC) diameter four-bladed propeller.

As a result of the cowling and engine/propeller change, the face of the F4U-4 cowling extended not quite three inches forward relative to the F4U-1's and the overall length as measured along the waterline was 4.125 inches more than the F4U-1's. The F4U-4 retained the fabric covering on the outboard wing panels, rudder, and elevators. (The ailerons were plywood covered.)

The cowling changes included a guarded inlet at the bottom of the cowl ring, the elimination of the overlapping cowl panel joints, a complete reconfiguration of the cowl flaps (fewer and larger) and exhaust system (two exhaust stacks located above the wing leading edge and one below on each side rather than all three exhausting on the lower side of the fuselage just behind the cowl flaps), and an inner surface to the cowl ring.

The exhaust stacks were located under the cowl flaps and exhausted into a small recesses above and below the wing leading edge. 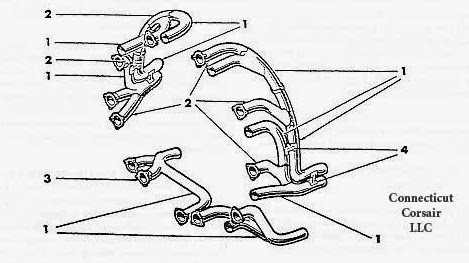 Note that I lifted the above illustration from the excellent Connecticut Corsair web site. See http://www.connecticutscorsair.com/pages/SRM%20-%20Engine%20Group.htm

Darren Tamanaha was able to get behind the ropes surrounding the Pima F4U-4 and provided me with the following excellent pictures of the exhaust stacks in place. Note that the cowl flaps on this airplane are fully open. Normally they are closed so the stacks cannot be seen except from the rear of the airplane looking forward.

The upper and lower exhaust recesses (you can just see the very end of the lower stack from this angle): 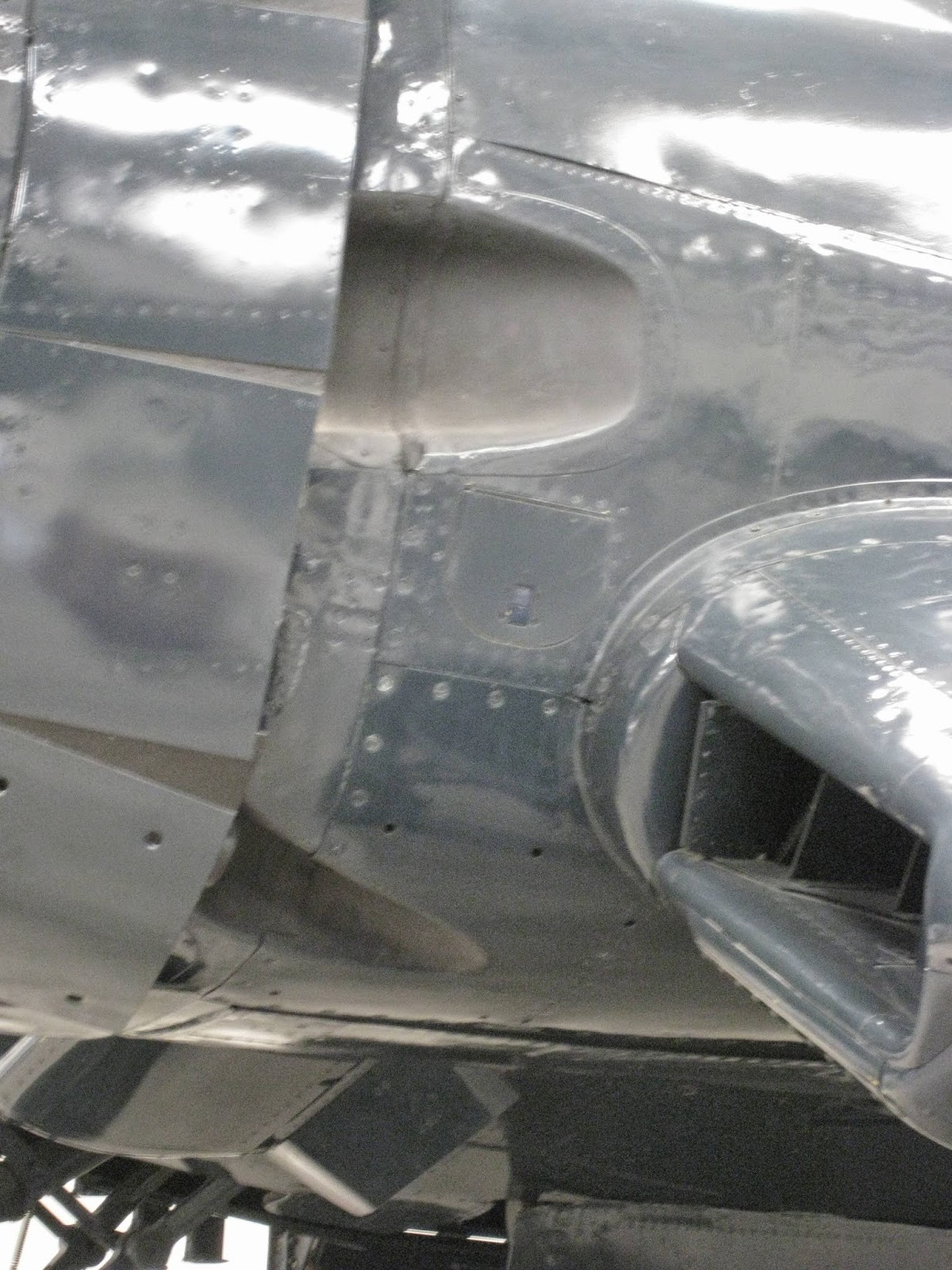 The collector and upper stacks: 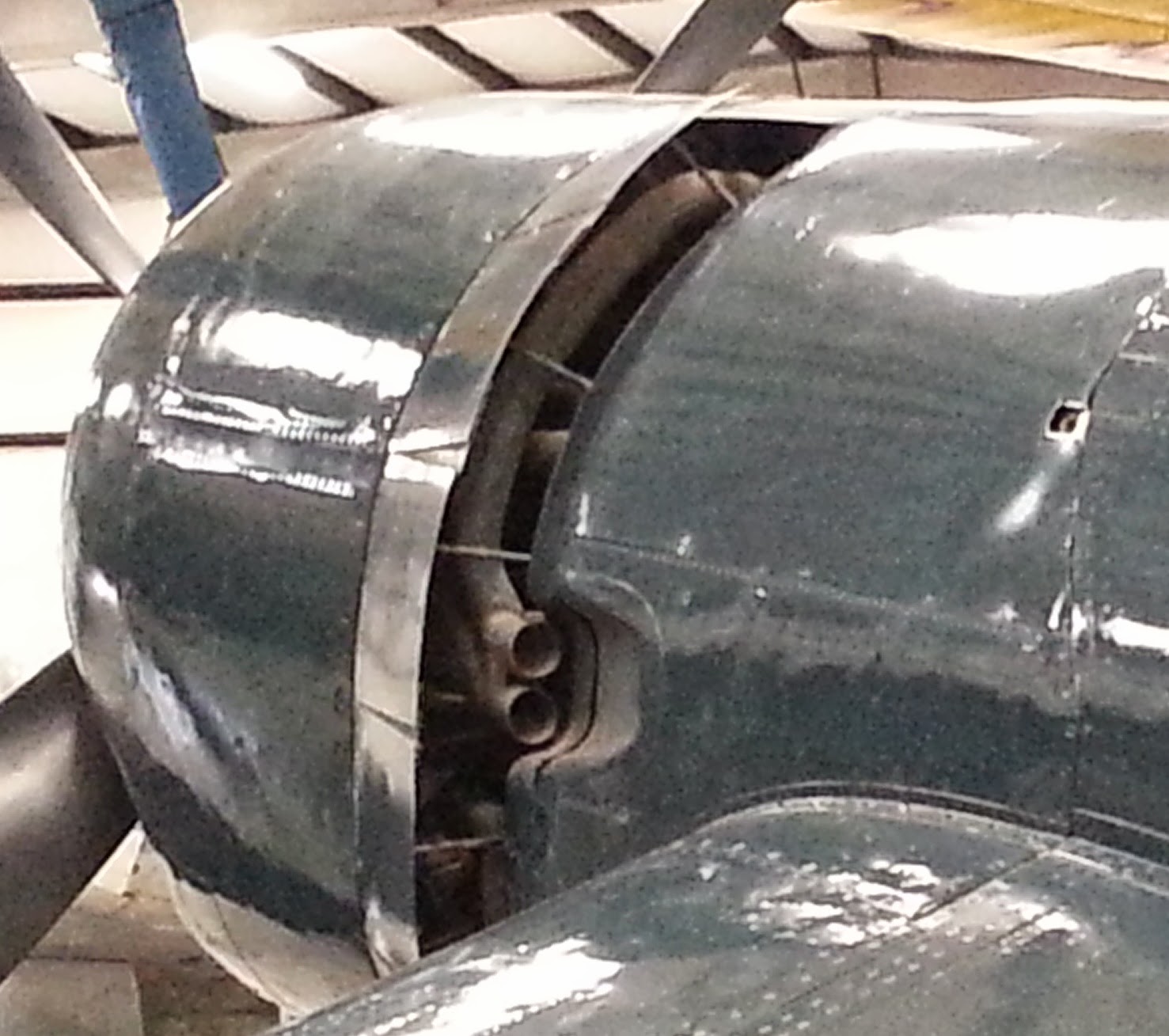 A closeup of the upper stacks and the recess: 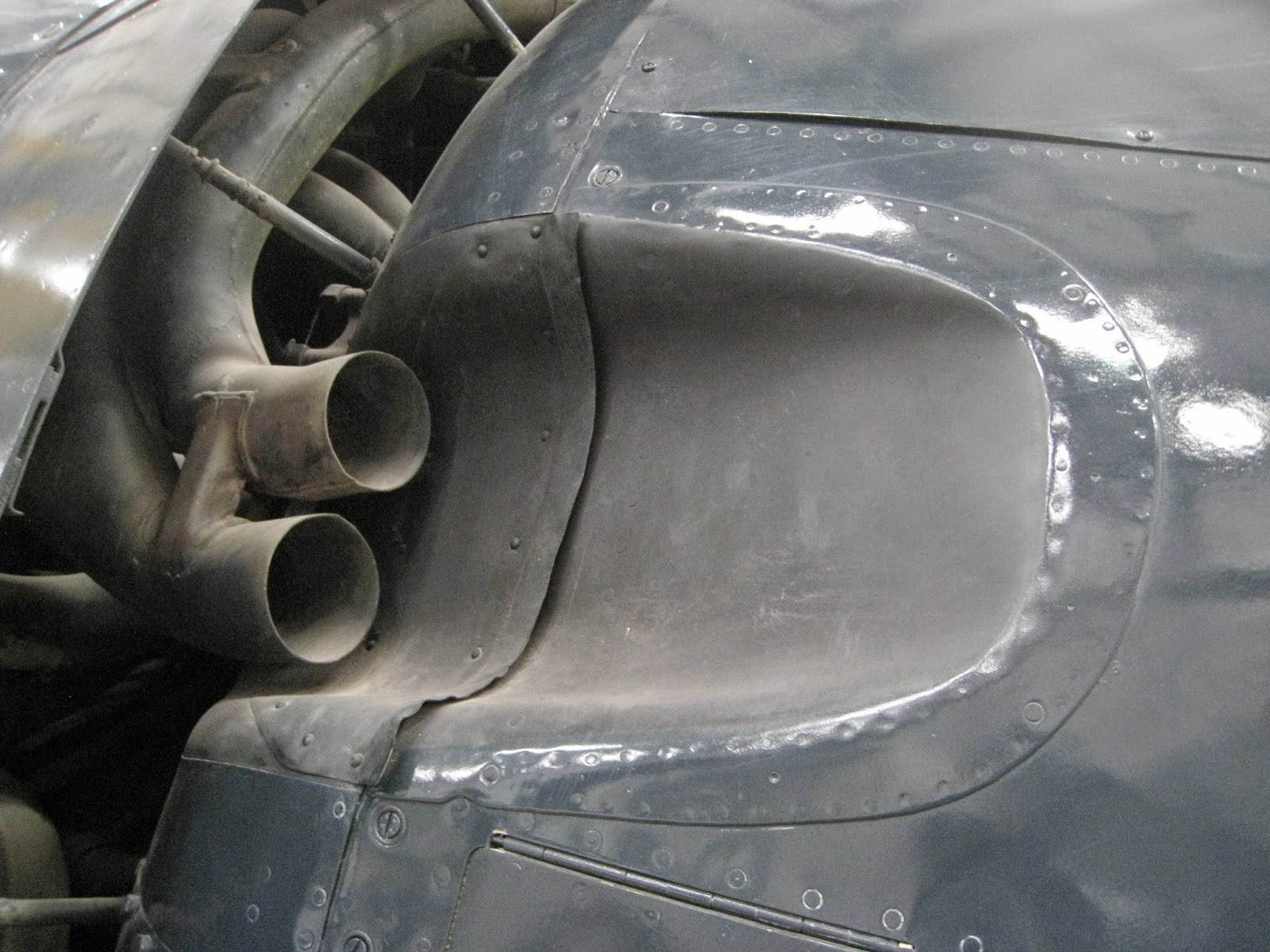 A closeup of the lower stack (which I've not seen a picture of until now - note that it would be virtually hidden under the cowl flap when it is closed): 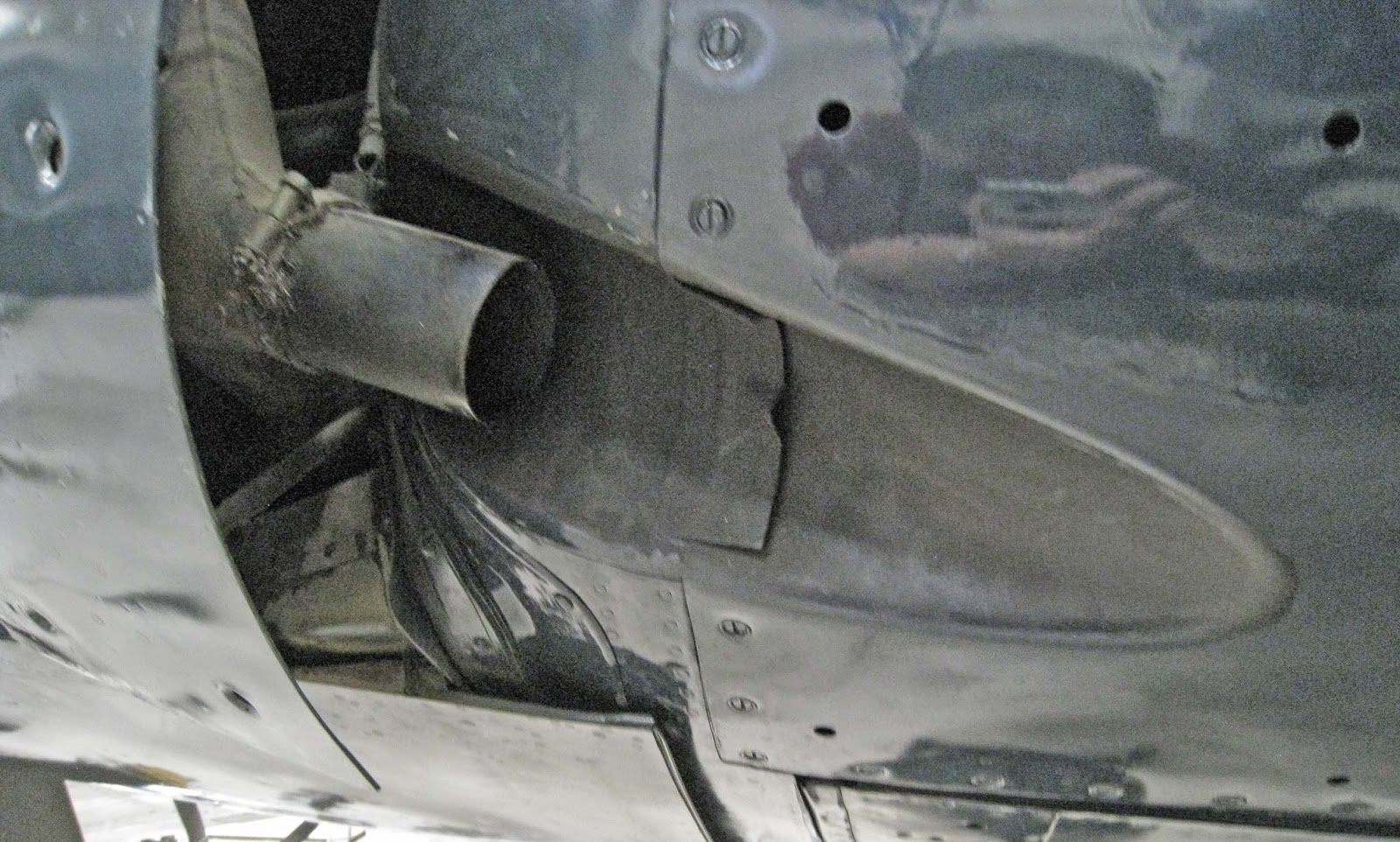 As previously mentioned, there was a separate inner surface to at least the cowl ring on the F4U-4: 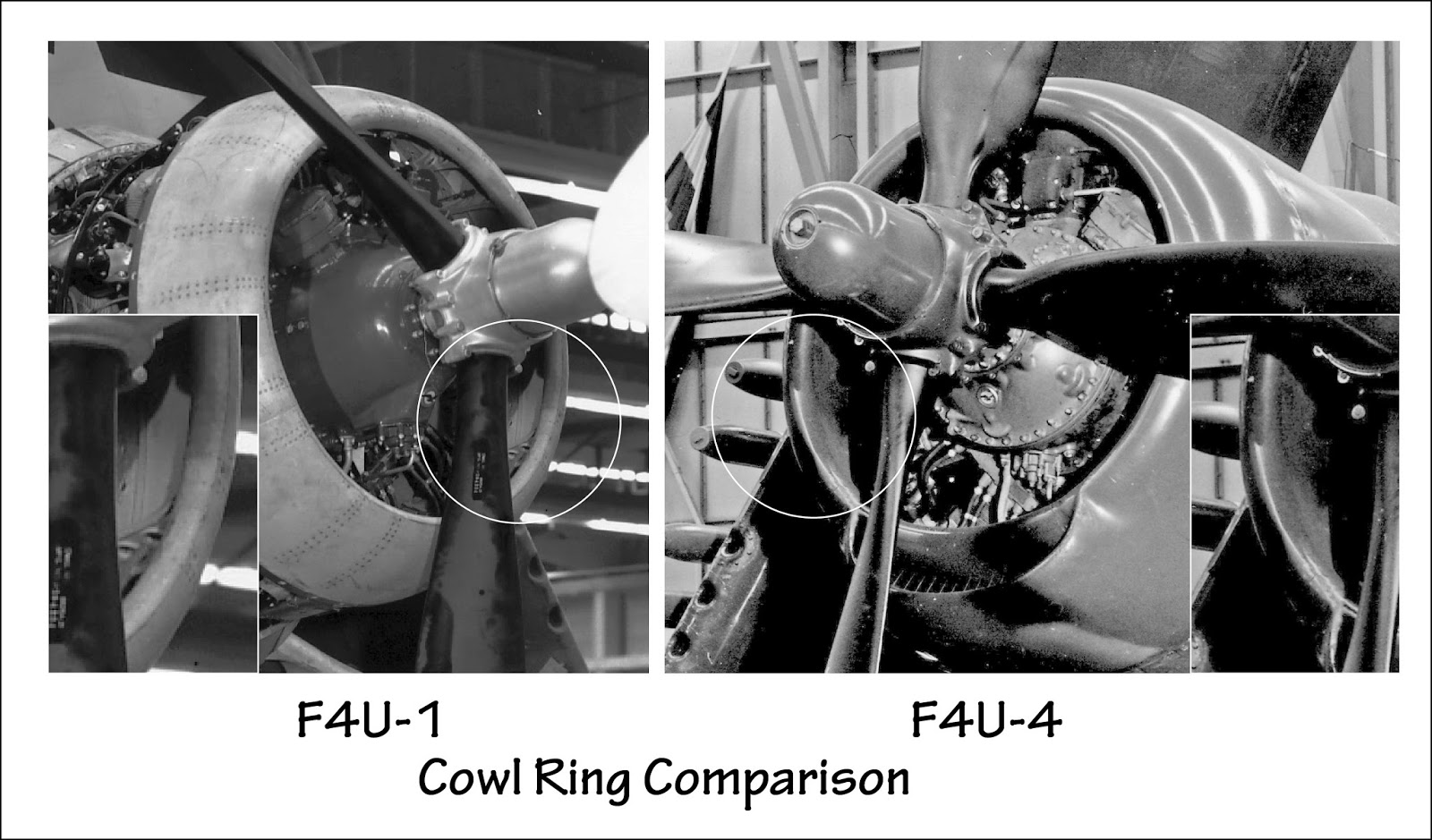 The addition of the scoop along with the elimination of the round "backfire" ports, change to intercooler outlet door, and mounting the catapult hooks in recesses instead of on the surface of the wing resulted in a notably different bottom to the forward fuselage.

Also note the step added to the right inboard flap toward the end of F4U-1D production (BuNo 82527) and FG-1D production (BuNo 87872). It was originally fitted with a flush fold-in cover but this was subsequently removed. Access to the cockpit of the F4U-4 was further enhanced by the addition of a bigger, fold-out step in the side of the fuselage in place of the kick-in step on the F4U-1D. 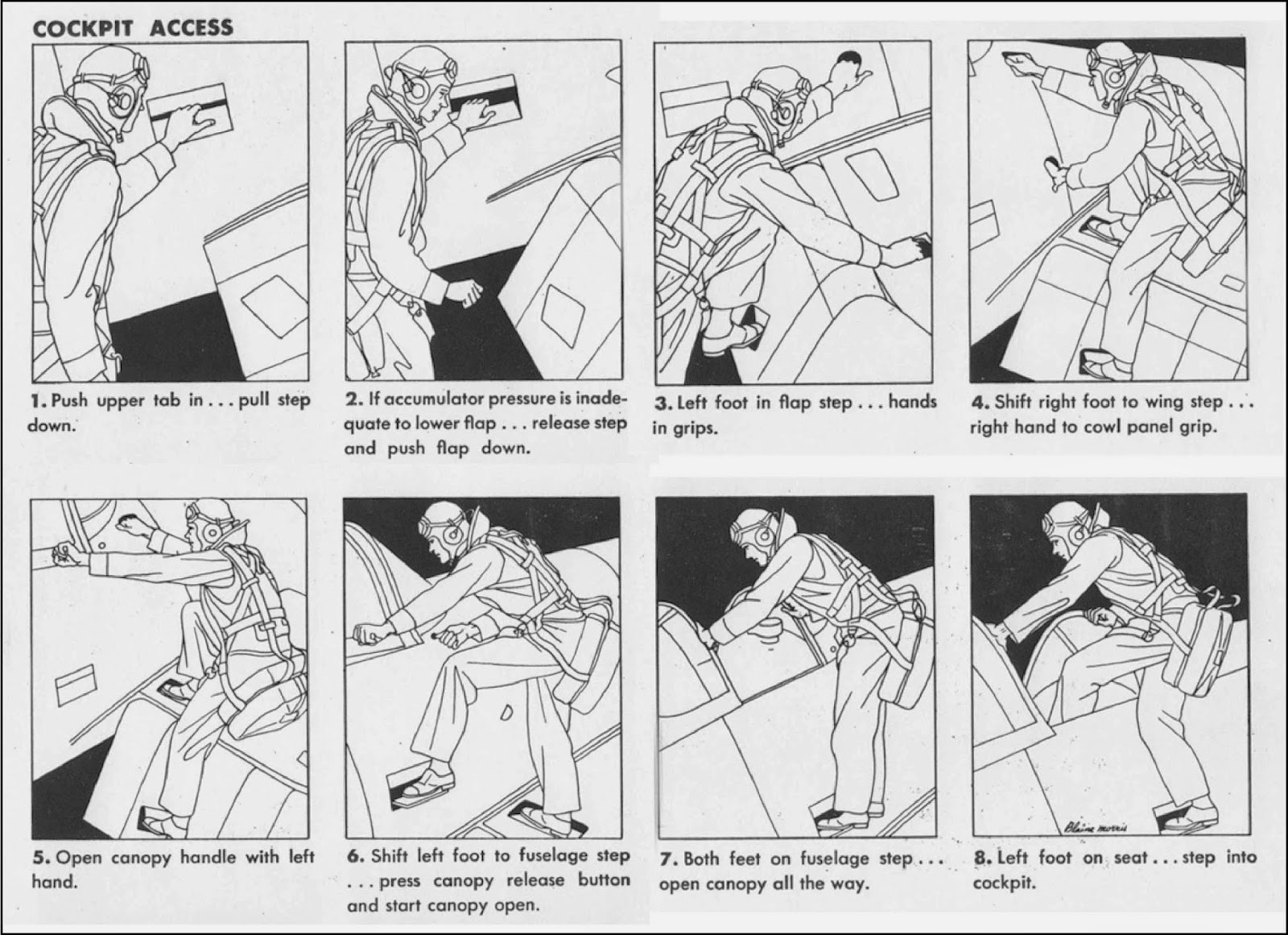 A similar but narrower step (but not the hole in the flap) was added to the left side to allow a mechanic who had started the engine and warmed it up to exit the cockpit while the pilot was climbing in from the right side.

The change in the source of carburetor air resulted in a change to and the number of turning vanes in the inlet in the inboard leading edge of the wing (there might also be a difference in the shape of the inlet but I'm not willing to commit to that yet).

On the F4U-1s, the first three or so turning vanes directed the air into a duct that supplied air to the supercharger. (The rest of the air coming into this inlet went through the intercooler that cooled the pressurized air coming out of the supercharger and, when the auxiliary blower was not in use, directly to the carburetor.) The F4U-4 carburetor took air for supercharging from the inlet on the bottom of the cowl ring, so this sharp turning of part of the air coming into the wing leading edge inlet wasn't necessary (the F4U-4's intercooler was enlarged and extended farther forward into the area vacated by duct). As a result, the number of turning vanes was reduced from six to three. The pictures above aren't adequate to model the vanes in a large scale, but for the F4U-1, see http://www.britmodeller.com/forums/index.php?/topic/71774-vought-corsair-f4u/ and for the F4U-4, see http://www.primeportal.net/hangar/luc_colin3/f4u-5nl_122189/index.php?Page=2, which is an F4U-5 but I'm pretty sure this inlet was the same in the -4.

The most obvious change to the cockpit was the addition of a floor. However, the seat was changed from the standard one-piece bucket and seat back to a separate bucket and a plate of armor that served as a seat back. The rudder pedals and the control stick pivot point were moved upward, the consoles were modified somewhat, a narrow subpanel was added below the instrument panel, and the chart board slot was eliminated in the instrument panel (it was now stowed in a rack on the right side of the cockpit).

And then there were changes during production. Almost half the F4U-4s were built with the rounded windscreen of the F4U-1D. It had a separate plate of bullet-resistant glass mounted behind the center panel. This was then changed to a flat center panel that incorporated the bullet-resistant glass. The canopy was modified as well with the change to the flat windscreen; its forward edge was not as rounded at the top and the armor (it was not just a sunscreen) over the upper aft portion of the canopy was deleted. 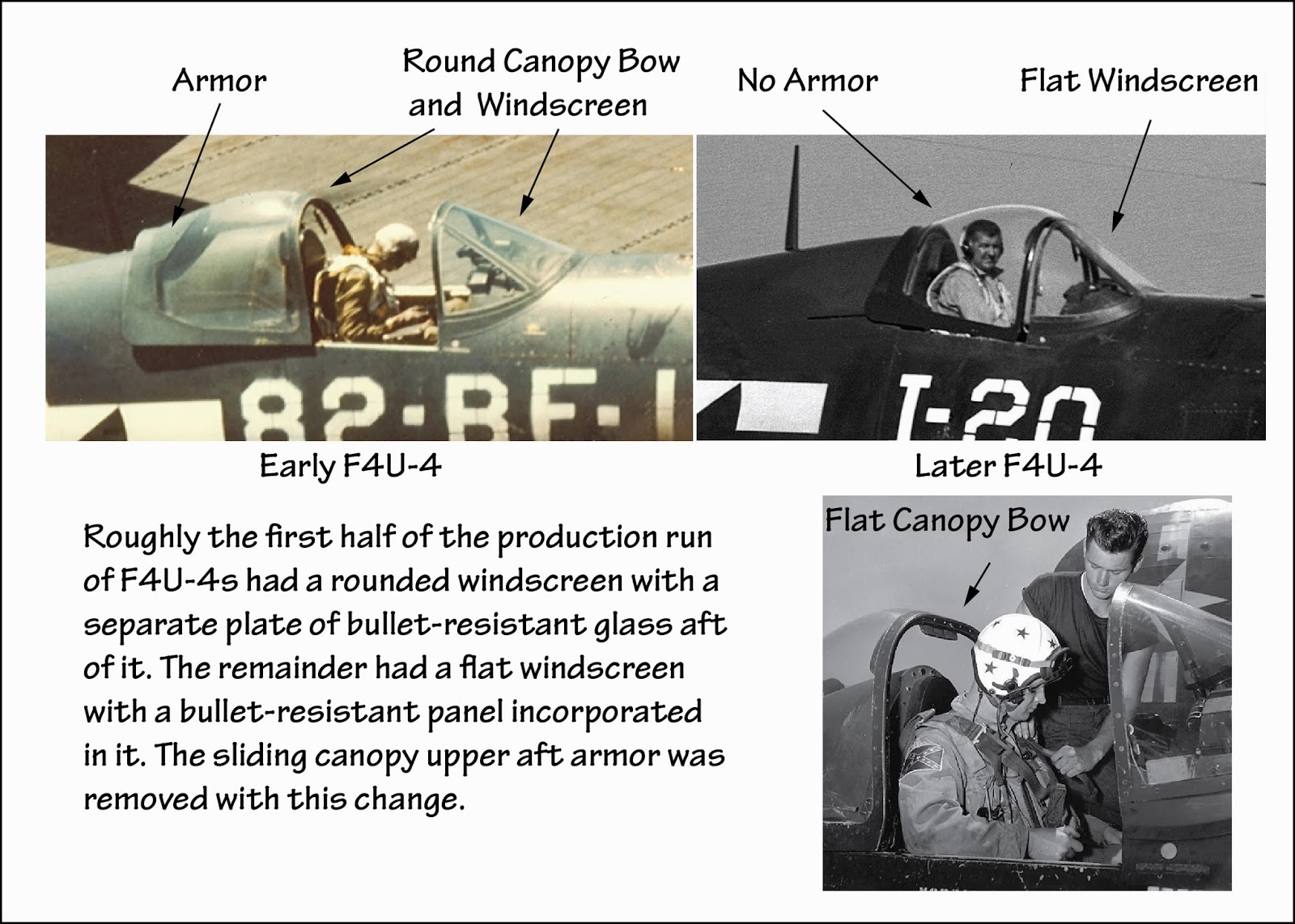 Toward the end of F4U-4 production, a new canopy involving a bump in the turtleback was incorporated. This was carried forward to the F4U-5.

As far as I know, it was only installed on late production F4U-4Bs and -4Ps**.

The 20-mm cannon armament change was essentially a change to the outer wing panels. This included the incorporation of the single-stub rocket pylon in place of the two smaller zero-length supports.  One of the pylons was relocated forward onto the outboard cannon fairing.

(I need better examples for the above. The -4B shown has adapters on the rocket launchers and the third cartridge ejection port isn't visible on the -4 wing.)

An adapter was developed for the two-post -4 rocket wing so that bombs could be carried on the outboard wing panel as well. This adapter picked up the forward and aft attach points for the rocket posts:

A standard AERO pylon could then be utilized: 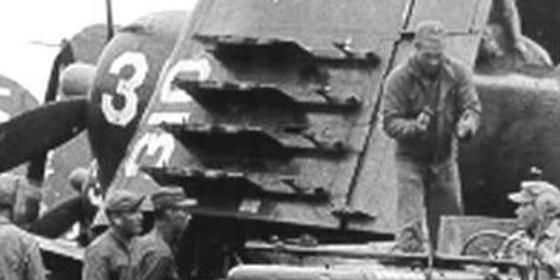 The wire antenna configuration was also changed during production. It was already different from the F4U-1 series because the entry point to the fuselage was now on the left side but the forward mast was deleted in production beginning with the 2,000th F4U-4 (BuNo 97332). This change eliminated the drag of the mast, reduced the drag of the wire antenna, and reduced weight by removing the medium high frequency radio installation. Existing F4U-4s were to be modified "as soon as practicable" according to Service Bulletin 215 dated 15 March 1945. (Thanks to Dana Bell for a copy of the Service Change.) 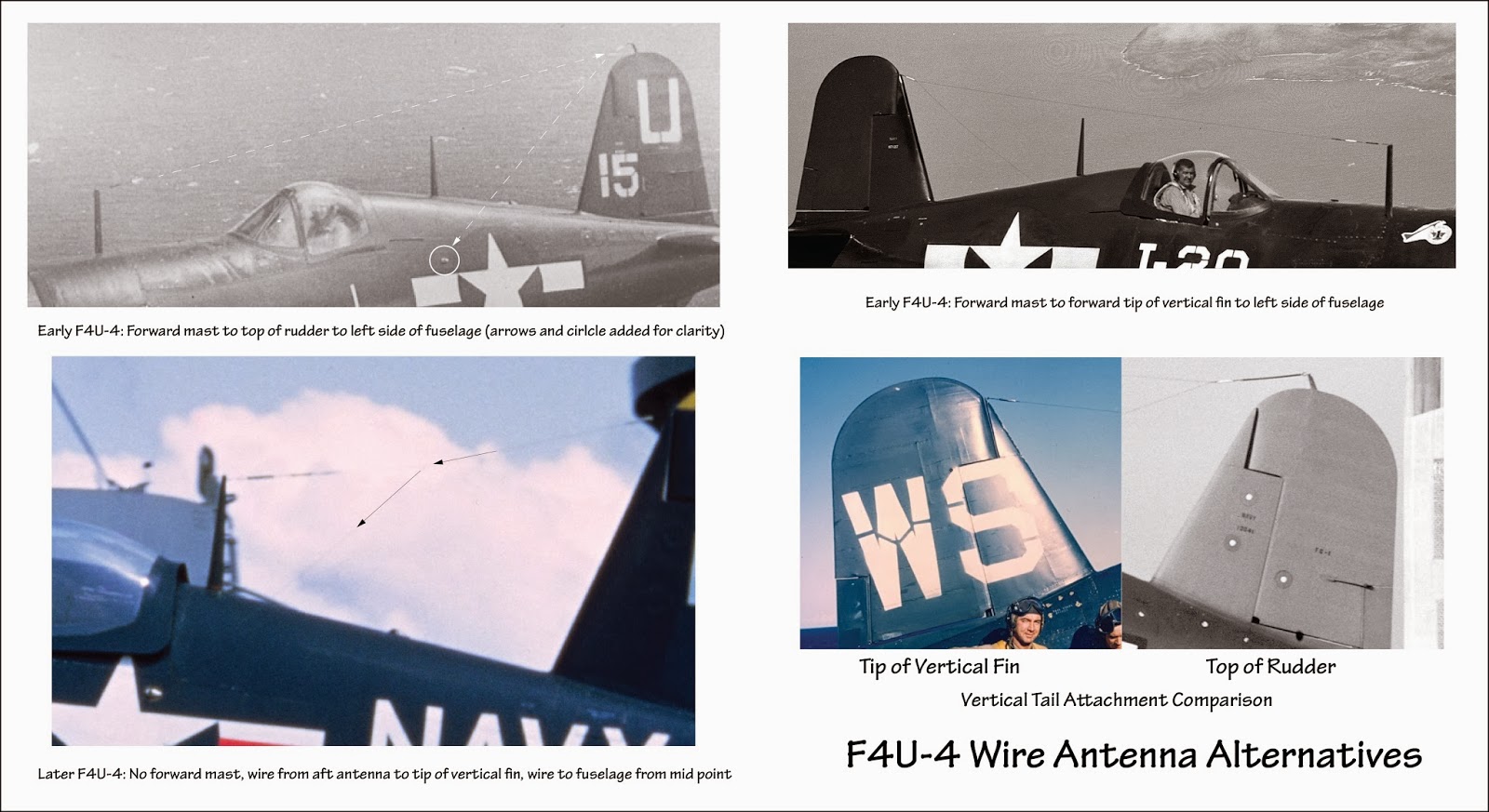 At some point, many -4s received a radar altimeter as evidenced by the presence of a pair of inverted-T shaped antennas on the bottom of the fuselage. 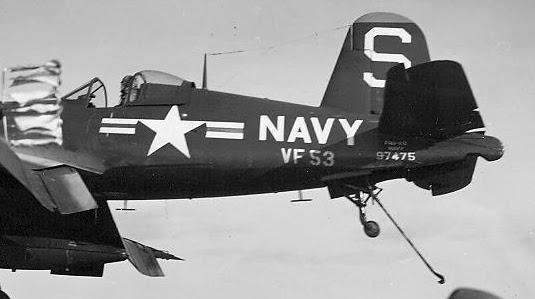 You're on your own with respect to tires. 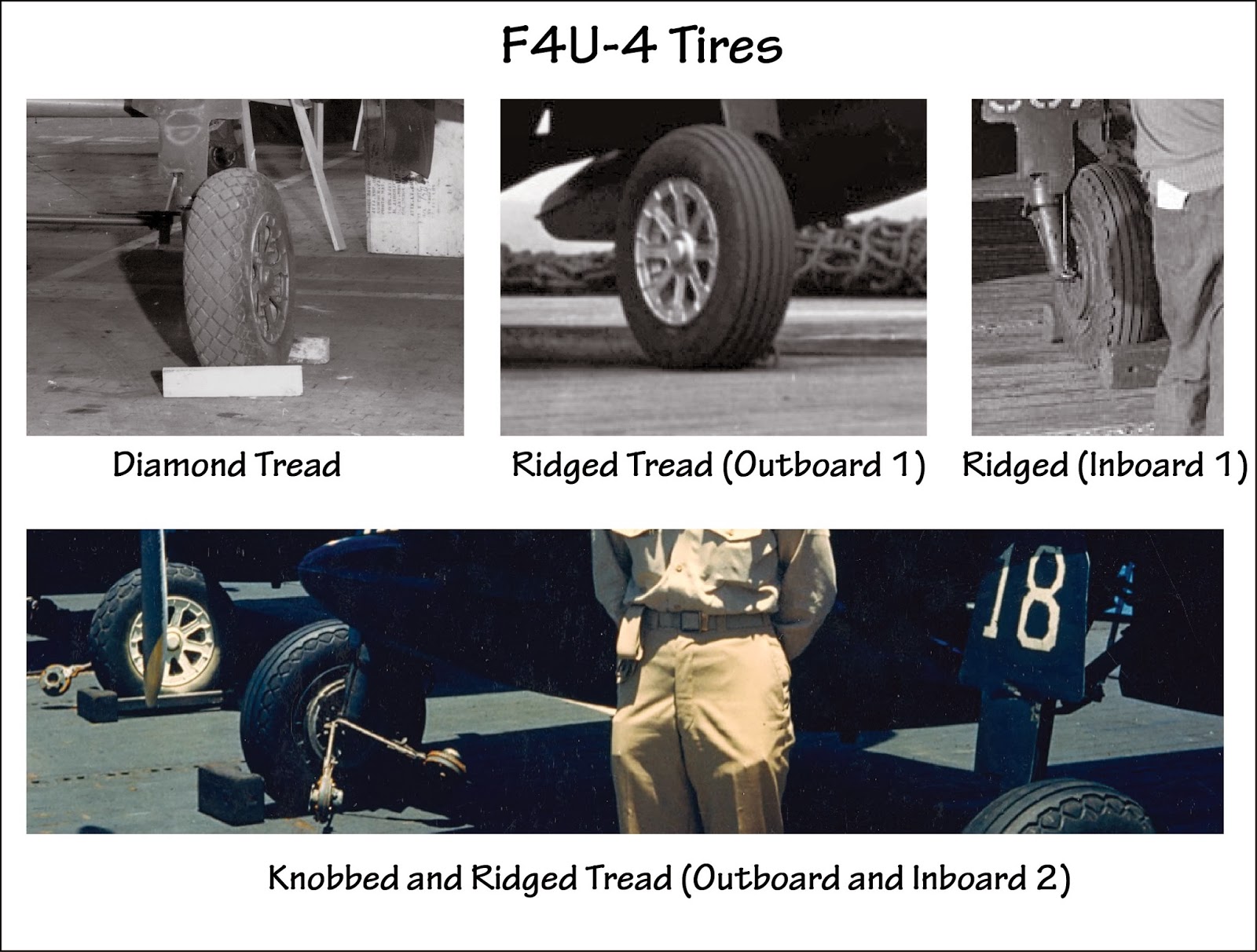 *A production history compiled by Richard Abrams lists a 2357th F4U-4 with no BuNo assigned, delivered in 1949. It's possible that this was a Corsair built by Vought for its own use or a "dog ship" that had previously been delivered and was only then being turned back over the the Navy.