Bat out of Hell 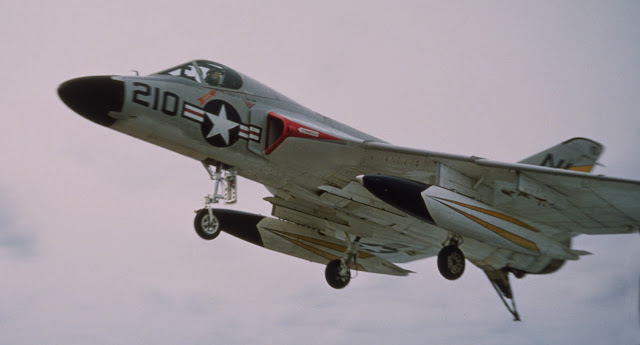 Specialty Press published an excellent book on the F4D and F5D, Killer Rays, by Mark Frankel. It is available from Amazon and I can't recommend it too highly. Steve Ginter's F4D monograph  is out of print but well worth the effort to find it for its many technical illustrations and pictures.

The F4D had a particularly long gestation, as Douglas sought to resolve handling quality and performance problems and Westinghouse, to qualify and deliver the AERO 13F armament control system. The first 109 Skyrays delivered (not counting the 2 XF4Ds or 12 from the first production contract) were accepted as day-visual fighters.  Even the 110th, BuNo 134853, proved to be unacceptable for service acceptance trials of the all-weather configuration. The benchmark was finally the 176th, BuNo 134919, although prior aircraft were subsequently modified to be compliant with it. If you are a nit-picky modeler, it is easy to be confused by the differing details that you'll see in pictures of early and late Skyrays.

This is a drawing that I did for an IPMS article on the F4D. It was based on Douglas drawings with details added from photographs. 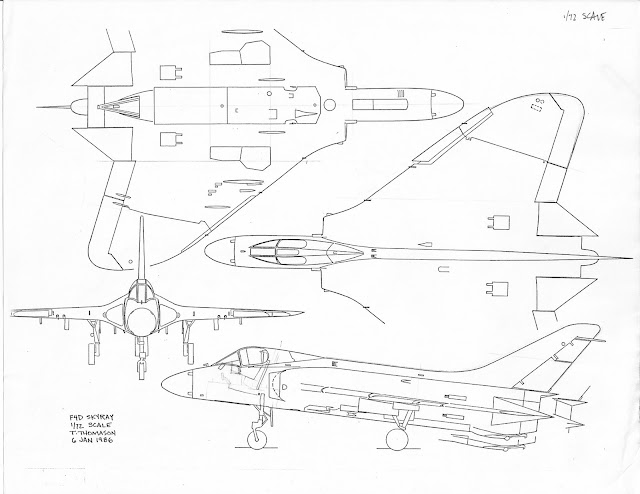 Note that the basic drawing has the late upper aft fuselage and the early tail bumper fairing with the respective early and late counterparts shown as scrap views. This was the basis for the similar drawing in Steve Ginter's F4D monograph. Note that it depicts the early, small inboard and outboard Aero pylons that were superceded. If you look closely, you'll note that the big pylon that carries the external tank is angled slightly outboard and perpendicular to the lower wing surface. This is correct.

Contrary to some published drawings, the bottom of the fuselage does not tilt downward at the radome. The radome does angle slightly downward, a late change at the mockup stage to provide more over-the-nose visibility, but not to the extent that it protrudes below the fuselage aft of the radome. (Also see http://tailspintopics.blogspot.com/2016/04/douglas-f4d-forward-fuselage-profile.html) 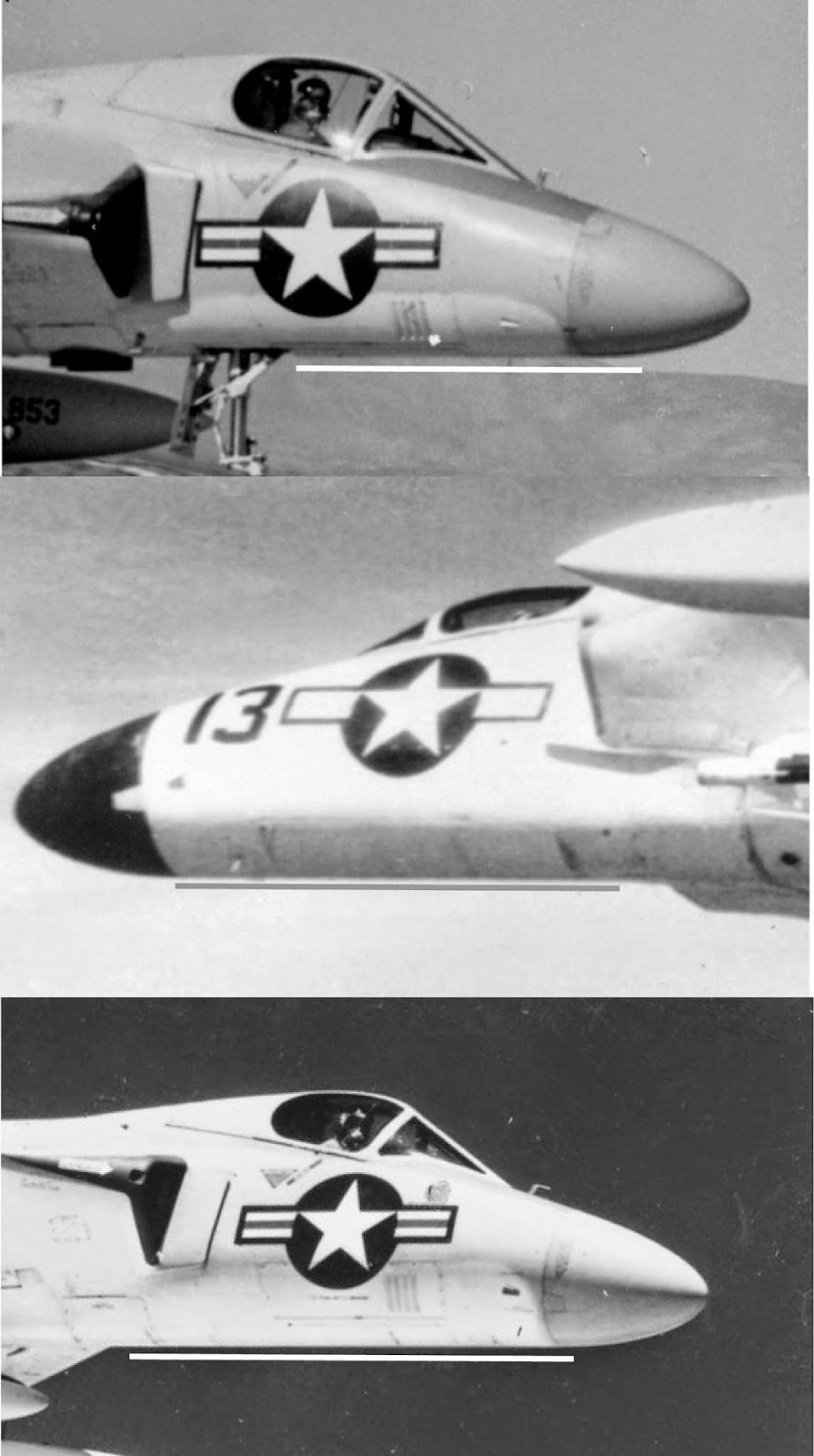 The Douglas seat originally installed was very similar to the one in the A2D Skyshark. 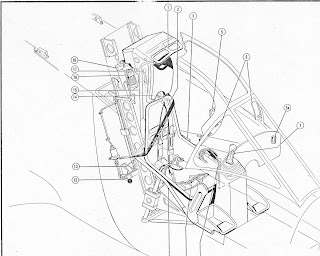 Lights: The F4D had flush Douglas position lights on the wing. Note that they were in slightly different locations on the upper and lower side of the wing. My old notes state that there were small yellow/orange formation lights below the canopy fairing and on the aft fuselage spine as shown on the drawing. The ones on the aft fuselage were later moved to the vertical fin. There was originally a white light on the top of the canopy forward of the hinge and on the bottom of the fuselage on the forward engine access door. Upper and lower red anti-collision lights were subsequently added to conform to FAA standards.

Early aircraft (at least through 134749) did not originally have the small leading edge barricade fences; these were retrofitted. Early aircraft did have the “spats” on main landing gear that helped engage the Davis barrier cables on axial deck carriers. With the advent of the angled deck, the spats disappeared.

This is a very early production F4D with the no scoops on the inlet, the small AERO pylons, and the Davis barrier pickups on the main landing gear:

At 134853, the center wing pylon that was used for external tanks was changed to the longer AERO 7A pylon (retrofitted) 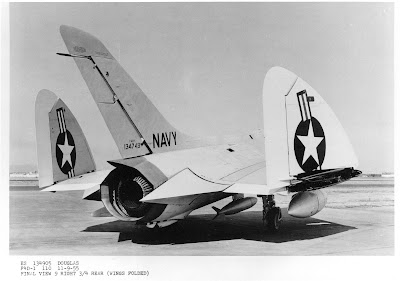 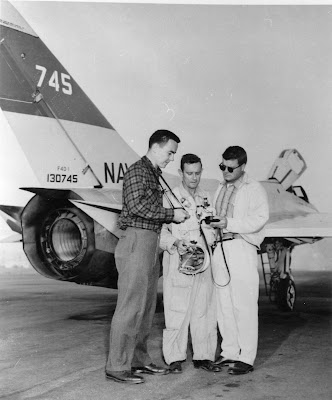 (BuNo 130745 was a Douglas flight test airplane used to develop the boat tail drag reduction; it was also used to set time-to-climb records in this configuration.)

This may help to understand the changes: 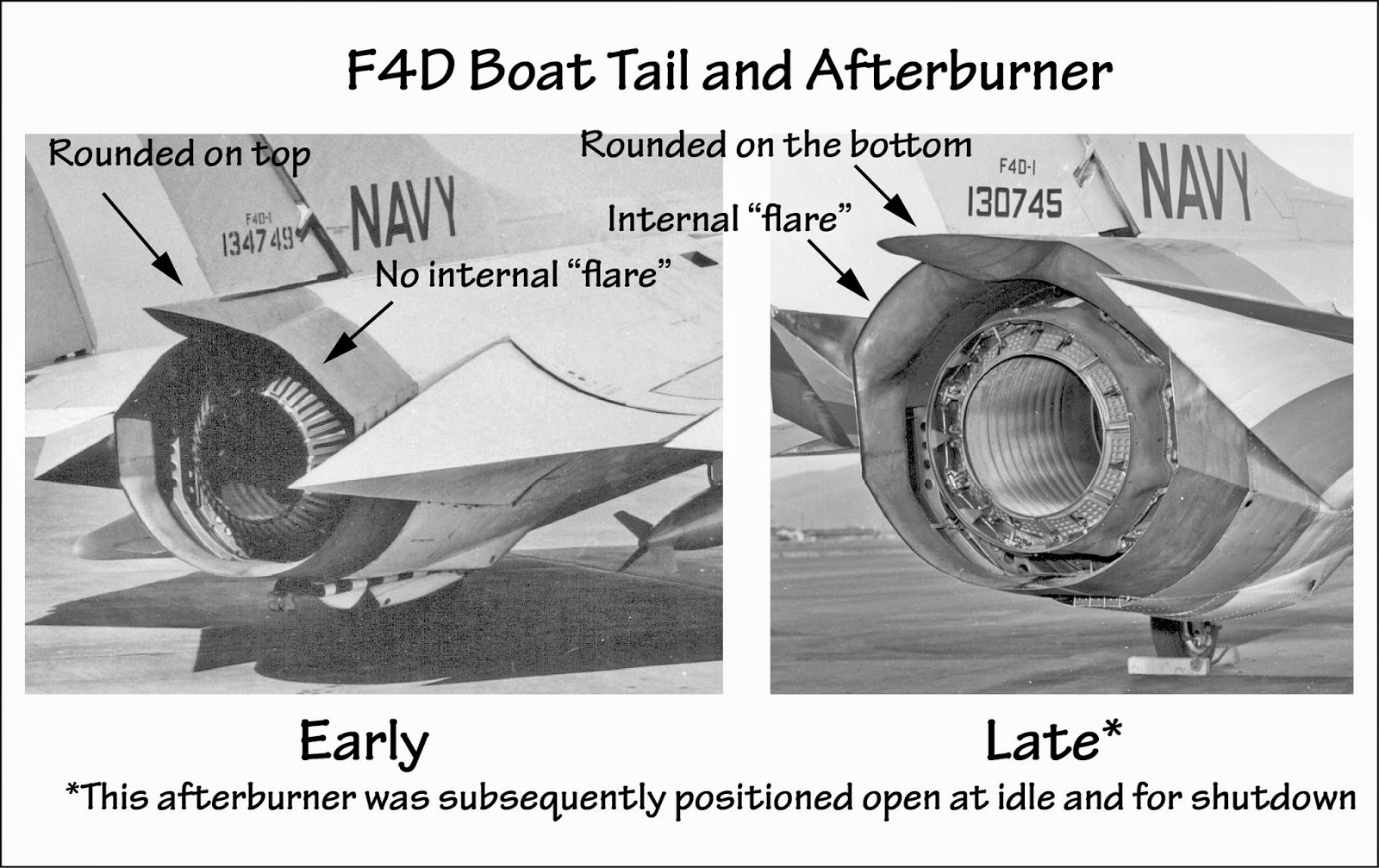 Note that the afterburner nozzle in the picture of 130745  above is closed, the position for non-afterburning thrust. During development, it was decided to have the nozzle open (the position when the afterburner was operating) when the engine was idling. This both reduced static thrust and allowed the engine to idle at a high enough rpm to keep the generator on the line providing adequate ac current for the AERO 13F fire control system. As a result, when the engine was shut down, the nozzle was now open as shown in the following photo. 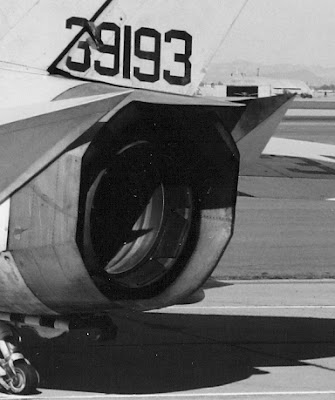 More detail is provided in this illustration: 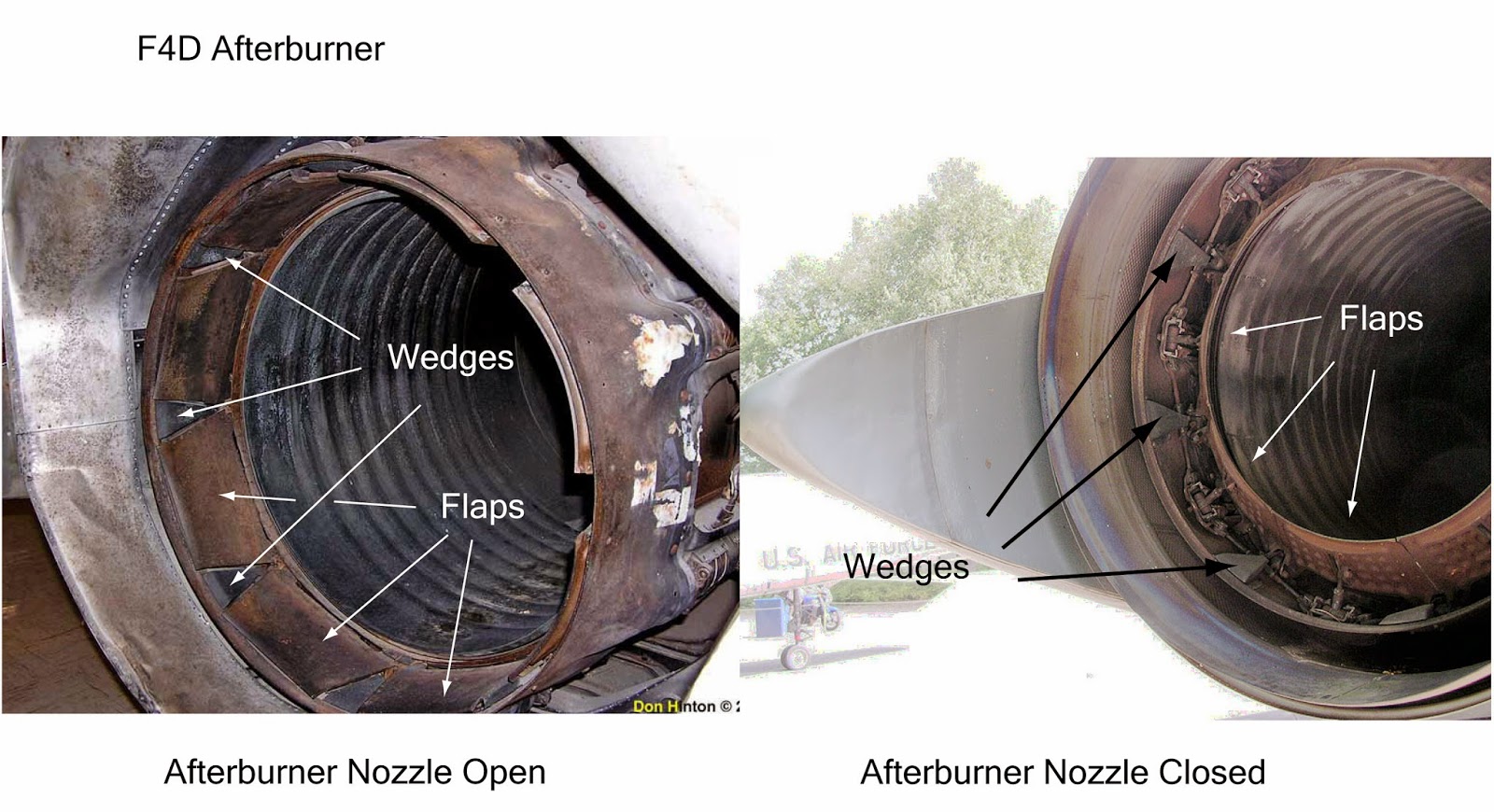 At 134919, larger inboard and outboard wing pylons (retrofitted); this allowed the 19-shot AERO 7D rocket pod to be carried.

At 139030?, the longer tail bumper fairing (it extended forward onto the aft engine access door) was incorporated for drag reduction. It was probably not retrofitted, e.g.BuNo 134936 at the Pueblo, Colorado museum has the original fairing. 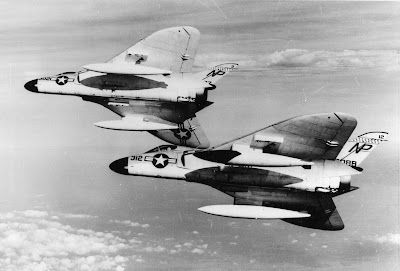 At some point in production, the small inlet on the outside lip of each engine inlet was changed from a flush configuration to a bulged scoop. The flush inlet is seen as late as BuNo 134804 but the bulged scoop appears to have been retrofitted on most Fords. The right flush inlet was round while the left was more rectangular.

The original armament was to be four 20 mm cannon and up to six rocket pods. The guns were sometimes (often?) removed and the ports faired over, (The shell chute holes were usually left open.) Sidewinder capability was added early on and up to four could be carried (on the inboard and outboard wing stations), although the usual load-out was two (I've never seen a picture of one with four or even four rails). 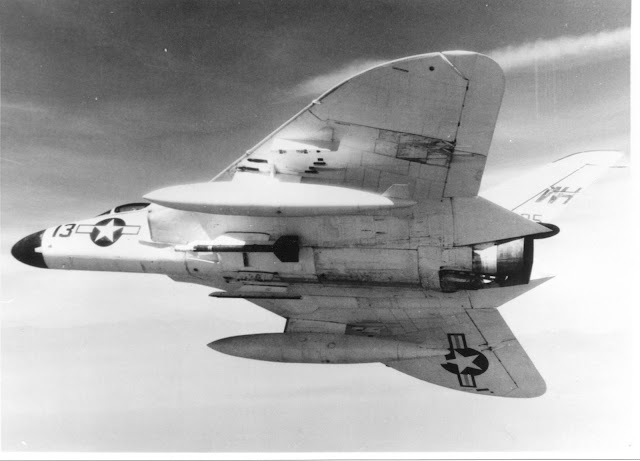 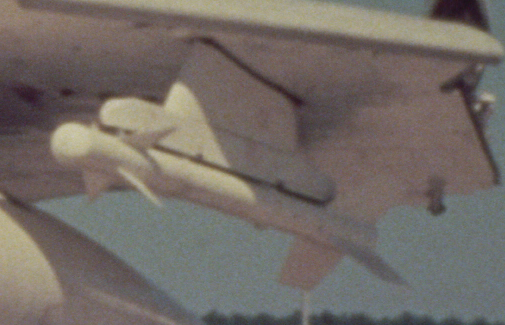 Toward the end of the Skyray production run, the Navy decided to standardize on the Martin-Baker ejection seat for its fighters (except as it turned out, for the F11F Tiger). F4Ds were therefore retrofitted with the Martin-Baker seat as each went through its first or second overhaul. At least some Skyrays were still flying with the original seat through 1960 but a 15 September 1961 Flight Handbook revision implies that all F4Ds except BuNos 1307XX had the Martin-Baker seat by then. 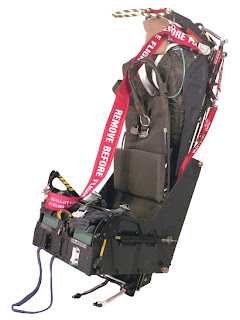 The cockpit and ejection seat were originally black. At some point, the cockpit floor, console sides, and ejection seat were painted dark gull gray. The requirement was in place in March 1954, almost a year before the change in exterior color to gray/white, so it seems likely that the F4D cockpit was painted as shown here except for the prototypes and very first production airplanes. However, the color of the Douglas seat was black for some time before being changed to dark gull gray. (The Martin-Baker seats were always black.) 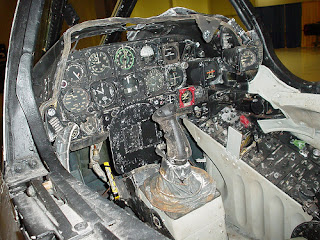 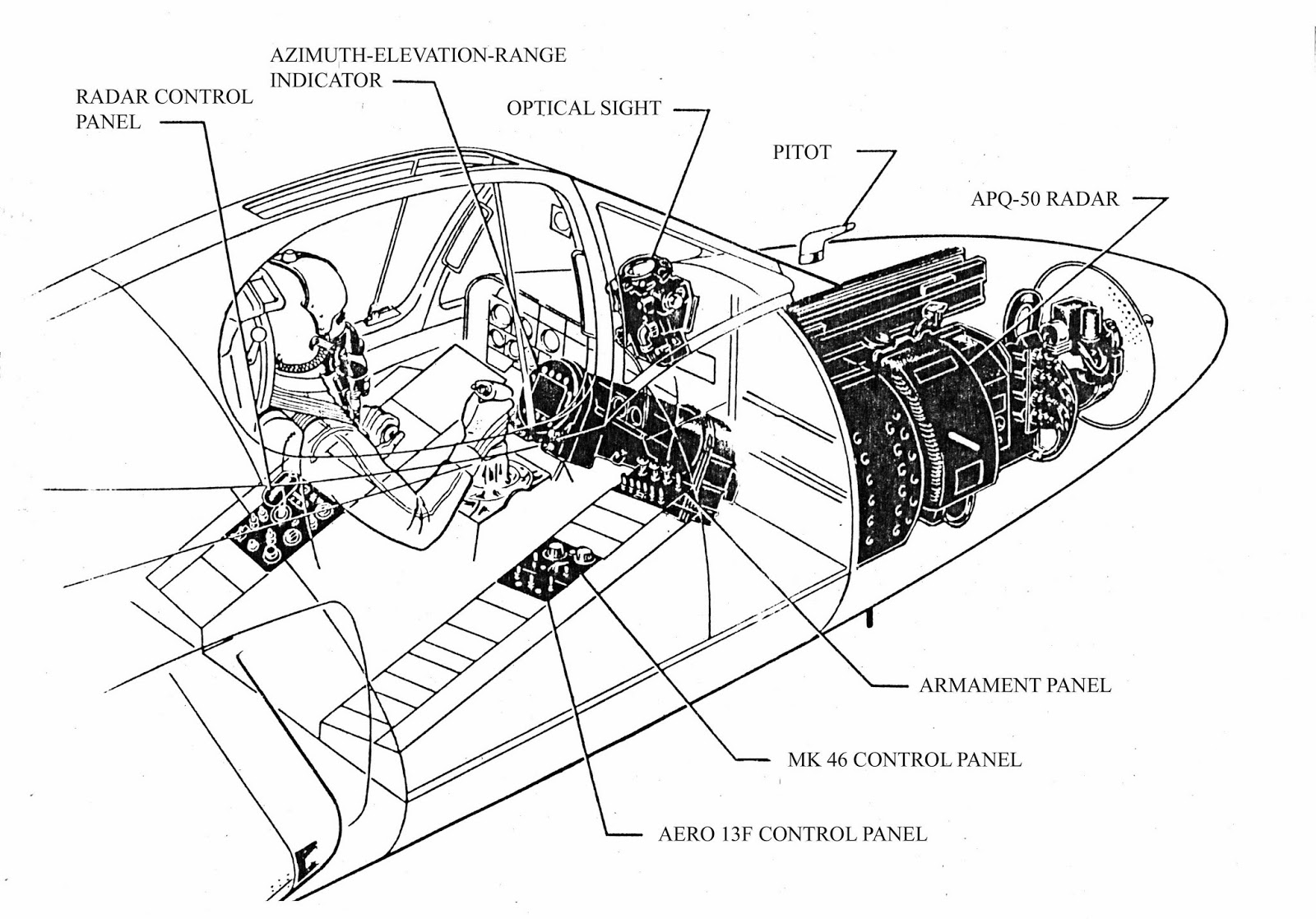 The inflight refueling capability was added by installing a probe on the left external tank.

Note that in the example above, the Douglas ejection seat and its rails are dark gull gray, the 20mm cannon ports appear to be faired over, Sidewinder rails are in place on the outboard pylon, and there is no red edging on the nose gear door (for some reason, operational Skyrays with red-painted "crush" points were fairly rare and definitely late in life; also see https://tailspintopics.blogspot.com/2012/10/painting-crush-points-red.html).

The leading edge slats were free to move so they were normally open due to gravity when the airplane was static. In flight, aerodynamic and inertia forces determined their position. (When the wings were folded, gravity closed the slats on the folded section).

The large triangular surfaces inboard of the elevons were giant pitch trimmers. They could be angled 28.5 degrees above their faired position but only 1.5 degrees below. They were trimmed up trailing edge up for takeoff and landing and are almost always seen in this position when the aircraft was on the ground.

The rudder was in two separate sections. The lower was a true rudder; the upper was used for trim and yaw damping. It was not unusual for the two sections to be in different positions.

The pod on the centerline station was known as the Navpac. It contained marker beacon and civil VOR omni receivers.

Note that the instrument panel was not symmetrical: the upper left corner was slightly lower than the  the upper right to improve the pilots ability to see the Landing Signal Officer.

As far as kits go, the best by far is Tamiya's, which are available in both 1/72 and 1/48 scale. This is the 1/72nd version, built and photographed by Joe Hegedus. Click Here for an excellent build article by AlexS. 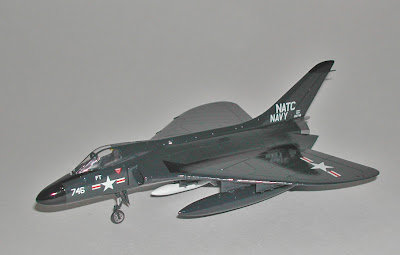 Click Here for a detailed and helpful review of the 1/48th kit.

Furball Aero-Design released a set of 1/48th decals for several F4Ds along with comprehensive marking instructions. 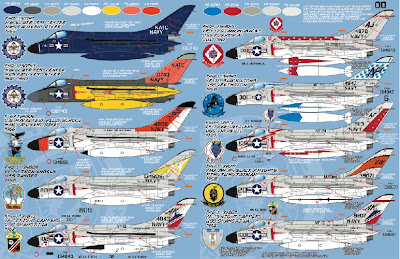 Unfortunately, Furball has sold out: http://stores.ebay.com/Furball-Aero-Design?_rdc=1
Posted by Tailspin at 8:52 AM No comments: