The Grumman F11F was one of three day fighters developed for the Navy in the early 1950s, the others being the North American FJ-4 Fury and the Vought F8U-1 Crusader. The Fury was one of the best day fighters that didn't have an afterburner. As a fighter, it was relegated to Marine Corps squadrons; as a nuclear strike aircraft (FJ-4B), it had a relatively brief career with the Navy, mainly procured as such according to some accounts to get Douglas' attention about correcting the A4D's initial shortcomings.

The F11F had an afterburner but it was deficient in every respect to the F8U except for handling qualities, particularly on approach for landing. Which is why, after a brief operational career, it was relegated to the Blue Angels flight display team (about 40 of the 201 built were flown by the Blues at one time or another) and advanced flight training.

Although only 201 were built, there were two different production configurations, the short and long nose. 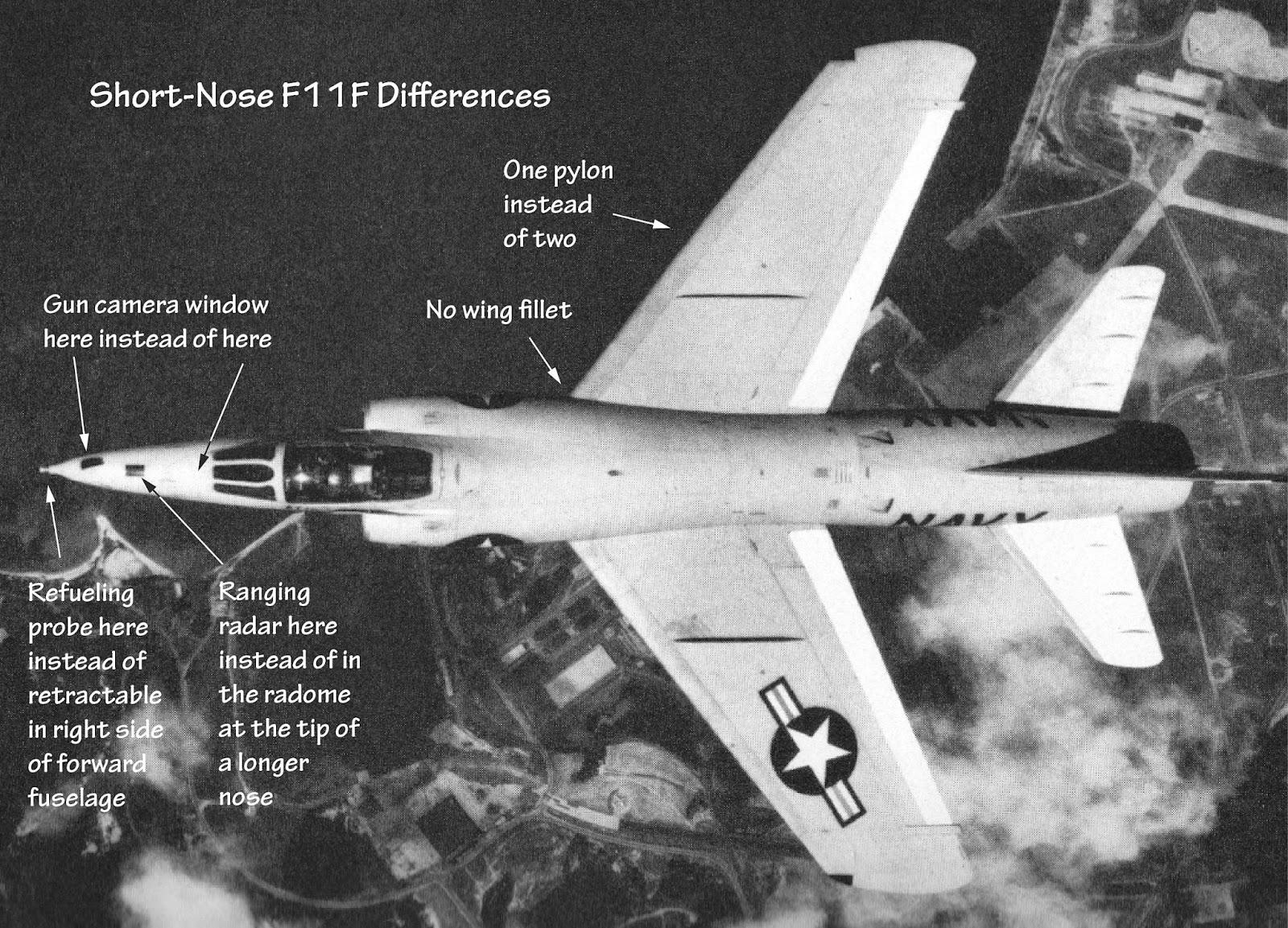 The short-nose airplanes also had the angle-of-attack sensor on the left side of the forward fuselage (although it was not on early test and production aircraft); the sensor was on the right side of the long-nose F11Fs.

That's pretty straight forward, although care has to be taken with respect to where the change begins in the forward fuselage: 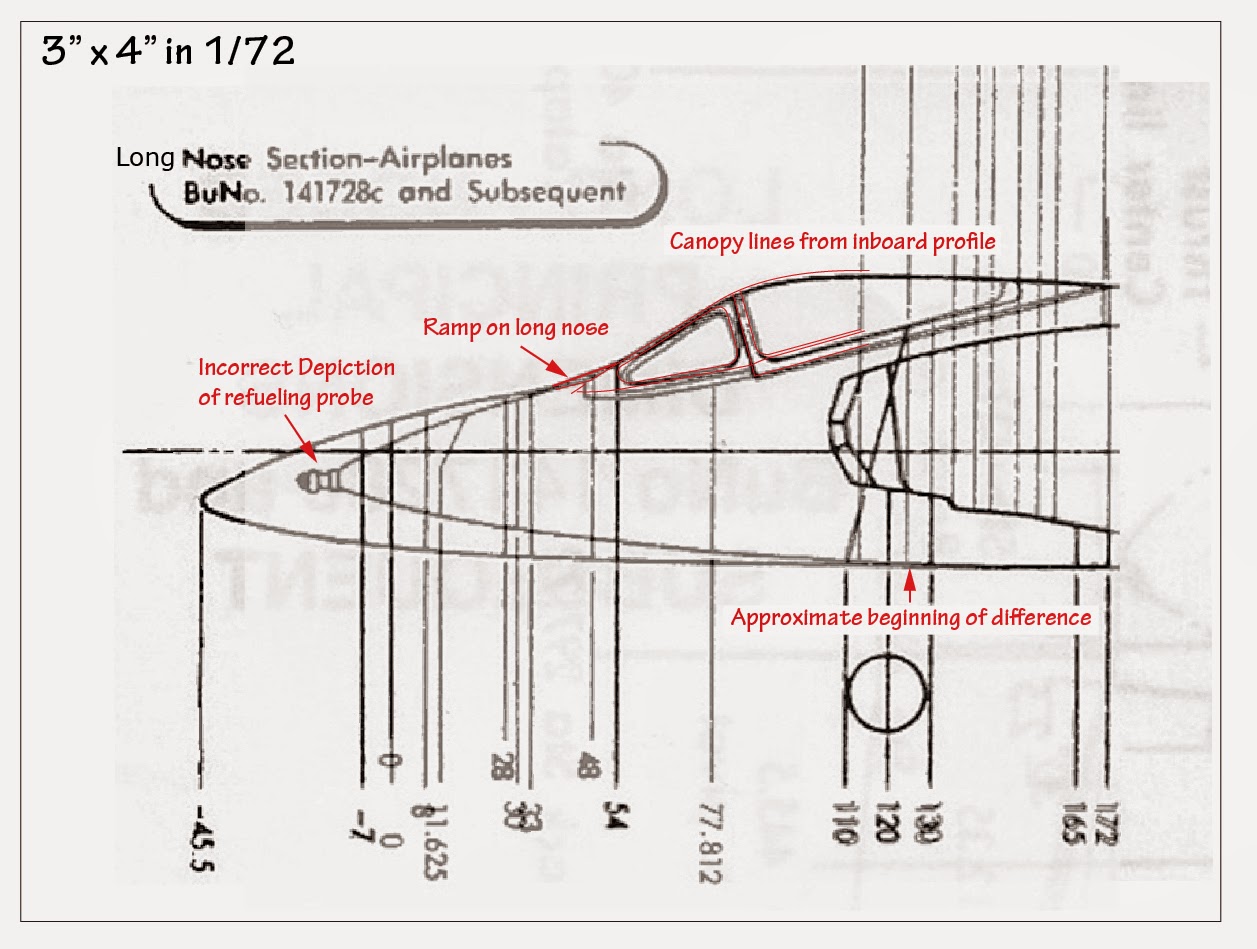 Then there is the problem of sorting out what aspects of the various existing F11Fs on display are bogus. Worse case is the F11F that was formerly on the deck of the Intrepid Air-Sea-Space museum and is now on loan to the MAPS Air Museum at the Ankron-Canton Airport in Ohio. It is painted as Bureau Number 141783, a long-nose F11F, when it served with VF-33. However, it is actually a short-nose F11F, BuNo 138622, that spent its career at Grumman in flight test.

(It also doesn't have the wing fillets of the long-nose configuration.)

Even the best preserved example, BuNo 141828, shown here with Don Hinton at the National Museum of Naval Aviation, has a few (but minor) configuration issues. (Don has photographed every square inch of this airplane, which provides a treasure trove of detail information for kit manufacturers and model builders; see http://www.philsaeronauticalstuff.com/f11f/f11f.html.)

Many of the F11Fs on display are in Blue Angels markings. However, most of these are not in the Blue Angel configuration:

The long-nose Blue Angels F11Fs had the same modifications. See the Phil Juvet photos here: http://www.philsaeronauticalstuff.com/f11f/f11f.html. They don't show the gun-bay doors but pictures on the Combat Air Museum do as do other photos of this airplane that can be found with a search.

There is a minor difference in the presence or absence of the antenna under the aft end of the canopy.

The NMNA F11F does not have the antenna, probably because it came to the museum from a VT squadron. However, here is a picture of a pair of fleet F11Fs, one with (211) and the other without (206) the antenna...

For some notes on the 1/72nd Hasegawa kit and other stuff, see http://tailspintopics.blogspot.com/2010/11/f11f-tiger.html

For a discussion of the F11F's unique tailhook installation, see https://thanlont.blogspot.com/2009/09/tail-hook.html
Posted by Tailspin at 11:12 AM 8 comments: