John Rieley asked me a question about the XF2D-1 (XF2H-1 after BuAer changed McDonnell's company designation from D to H when Douglas was awarded a contract for its first Navy fighter in more than a decade), which caused me to review the content of my post on the Banshee family (see https://tailspintopics.blogspot.com/2009/12/f2h-banshee-modeling-notes.html). It turns out that I was a little sloppy in my summary of the prototype configurations.

There were three XF2D-1s, BuNos 99858-99860. Only the first two had forward fuselages that were one foot shorter than the production F2H-1. The third one had the longer fuselage but still had the shorter canopy of the other two XF2D-1s. There were numerous detail differences among the three airplanes as well. The best single reference is a drawing posted by Ron Downey in his excellent blog, Aviation Archives (http://aviationarchives.blogspot.com/): http://aviationarchives.blogspot.com/2015/07/xf2h-1-aerodynamic-three-view.html

Some of the numbers on that drawing are hard to read. From a configuration standpoint, the most significant are the ones inside small triangles. These are 1, 2, or 3 that denote specific configurations of 99858, 99859, and 99860 respectively. Note that a given XF2D-1 might have flown with more than one configuration; the drawing doesn't show all of the alternatives.

This is a crop from that drawing that illustrates the longer forward fuselage of BuNo 99860. 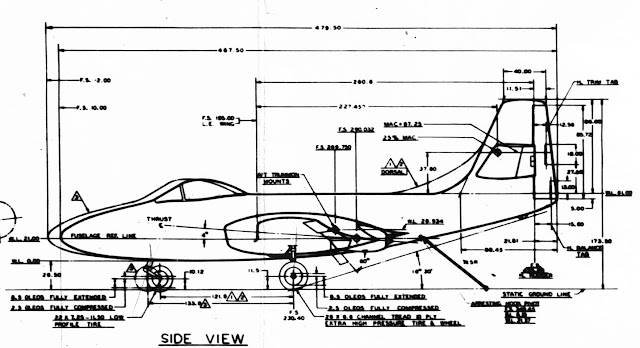 The first XF2D-1 flew with a significant amount of dihedral in the horizontal tail, presumably to raise them up out of the jet blast from the J34 engines and the original short wing trailing edges on either side of the tailpipes.

Bob Edholm flew it first and is also the pilot in the following pictures. 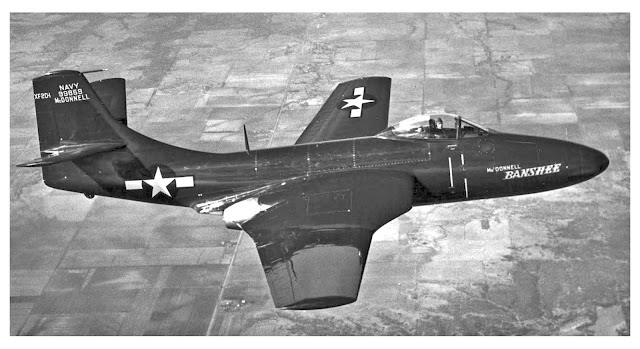 The second XF2D-1 flew with less dihedral in the horizontal tail and a larger dorsal extension forward of the vertical fin.

It would eventually be configured with the extended trailing edges on both sides of the engines, near-final empennage (note the small horizontal fence at the juncture of the leading edges of the vertical and horizontal fins), and tip tanks being evaluated for the F2H-2 (the production F2H-1 did not have tip tank provisions. 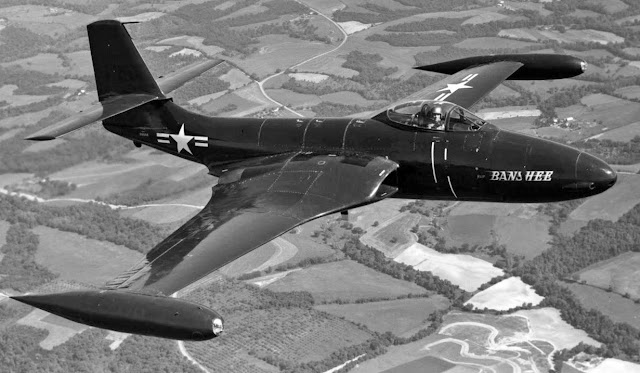 Except for the shorter canopy, the third XF2D-1 was very similar in configuration to the production F2H-1, shown here.

The canopy was probably lengthened for production for the same reason that the inboard trailing edge of the wing was extended aft: to increase the fineness/thickness ratio and thereby reduce transonic drag. 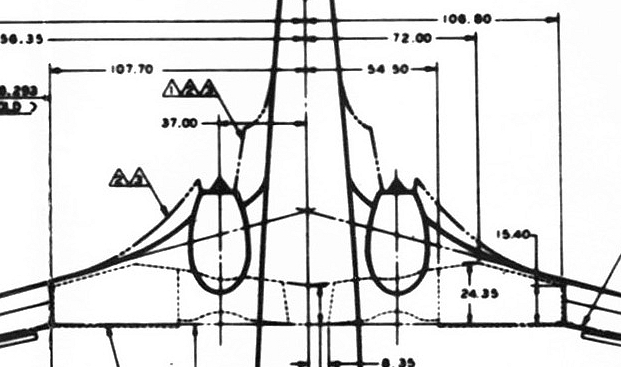